Gabriel prepares lottery slips near their father's coffin in the drawing room. Gabriel asks what Brutus did to bring the curse upon them. He says there has to be a way out. As he storms out, Morgan tells him that there is not. 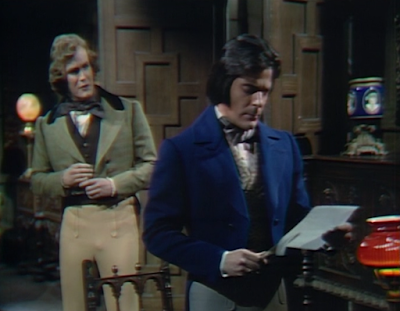 Gabriel comes to see Quentin. He asks if there's a way to stop Morgan from holding the lottery tonight. Quentin tells him there's no point postponing the inevitable. He reminds Gabriel that it's possible whoever goes into the room will survive. He wonders what happens in the room. Gabriel says he knows it will be him. He says he'd rather die than end up like their father. He asks Quentin to kill him if he comes out of the room. Quentin points out that they don't even know who will have to go into the room. He admits he's afraid, and says he'll take his chances with the lottery. 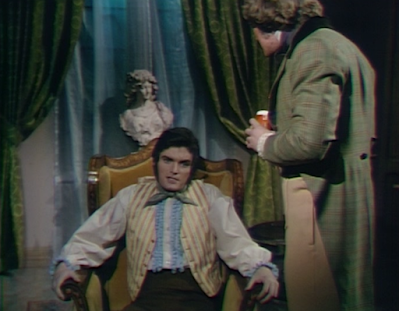 Catherine returns to Colliwood and offers Morgan her condolences. He brings her into the drawing room. He tells her that he must warn her. He explains the responsibilities he has inherited, and asks her to promise not to marry him if anything happens to him tonight. She doesn't understand, and asks him to explain himself. He tells her of the locked room and the family lottery. He says the rumor is true, and once each generation, someone has to spend the night in the room. All that have done so have either died or gone mad. She tells him not to hold the lottery. She asks how he can even take it seriously. She says she's more determined to marry him now. She asks if Bramwell participates in the lottery, and Morgan calls him a coward, saying he refuses to live up to his obligations. She says that Bramwell is not a coward. She adds that she will stay the night to see it through. 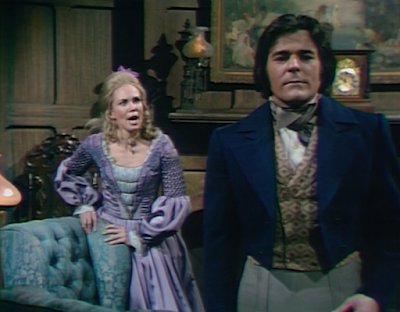 Quentin comes in and tells Morgan that they're waiting on him. Gabriel enters and asks why Catherine is there. He says that outsiders are not allowed. Morgan tells him that he's told her everything, and she's not an outsider. Gabriel asks for a drink, and Quentin fixes him one. Morgan picks up a vase with the lottery slips, and explains that there are three, one of which has an X. Flora comes in and tells him to prepare two more lottery slips, one each for she and Julia. Gabriel says if they include them, they have to include Melanie, too. Flora says that since Melanie went into the room to get Justin, she can be excluded. Morgan refuses, despite his mother explaining that women have been included in the past. She says that with Justin's death, her reason for living is gone. Quentin tells her that she's being selfish. She reminds him that they all have something to live for. Morgan says that as the oldest son, he has decided that only the men will be included. 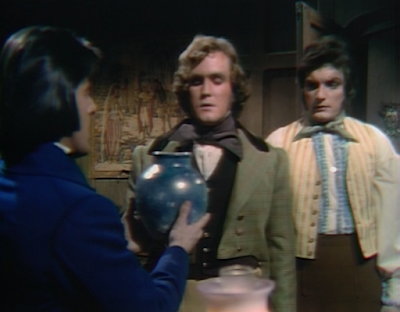 Catherine throws the three lottery slips into the fireplace, telling them it's a lot of superstitious nonsense. Everyone is shocked. Quentin tells her the facts about the room are well documented. She says she's surprised that intelligent people would take a legend so seriously. Gabriel agrees with her, but Morgan says he'll make new slips. Catherine asks for them to at least postpone the lottery for a day so that she and Morgan can get married. He agrees. Flora sends Quentin to get the minister. She then tells Gabriel that the lovers would like to be left alone. Catherine says she'll need to get Daphne. She and Morgan kiss. 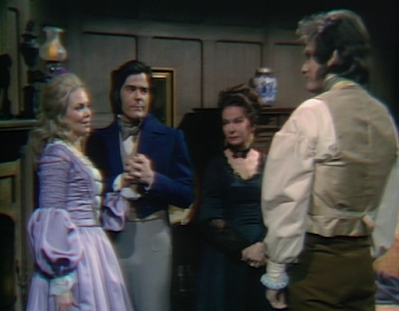 Gabriel tells Quentin that he feels relieved. Quentin assures him they have only postponed the inevitable. Gabriel asks what he thinks would happen if they didn't play the lottery at all. He says that whatever happens might not be as had as what happens in the room.

Catherine leaves to get Daphne as Bramwell arrives, offering Flora his condolences. Catherine tells Bramwell that she has decided to marry Morgan tonight. He recoils. Flora goes inside, and Bramwell asks Catherine when she decided this. She says it was very recent. He asks her to come with her. 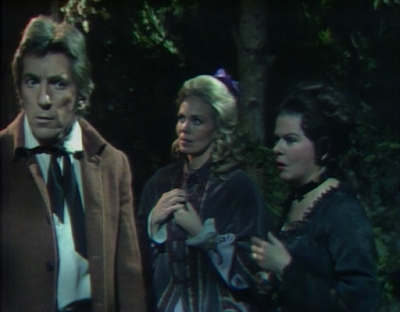 Bramwell throws Catherine into his room. He says he won't let her out until she gains her senses. He says he will never let her marry Morgan, and forces himself on her. 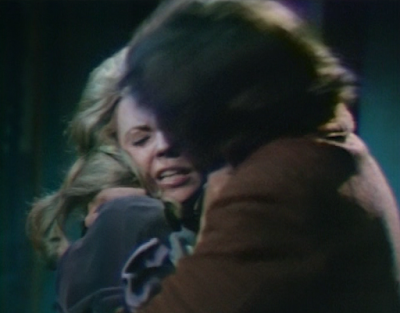 John: Doesn't it seem odd that such a curse would have such lax rules about who is to be included? Gabriel wants out, the women want in, others want Bramwell included... and Morgan assumes he can decide who makes the final cut? All the more reason I expect Morgan to be the one coming out of that room dead or crazy before this week is out.
Christine: My understanding is that the room requires a Collins family member once every generation and it's up to them to decide who goes. Using the lottery system seems a fair method, though if Morgan were as courageous as he'd have everyone believe, he'd volunteer to go and be done with it.
John: And speaking of this curse, if the person spending the night in the room dies, what triggers the next lottery? Does it happen right away, without waiting for the next generation? You'd think the curse might die with them, but it's clear that's not the case.
Christine: At some point, they need to establish what compels them comply with the room requirement. What happens if nobody goes into the room? Will zombie pirates attack?
John: Damn! I certainly wasn't expecting Bramwell to be so rapey! Again, quite an interesting couterpoint to the Barnabas/Angelique cat-and-mouse antics of the past five years!
Christine: I think the painted 5 o'clock shadow was our clue that he was a rogue who was willing to force himself on a woman. He's really not much different than Barnabas, who was also into kidnapping women, though you're right it's interesting to see the roles reversed. It's also interesting that he has a room suited exactly for this purpose, complete with a bolt on the door and a bordello lamp over the bed. 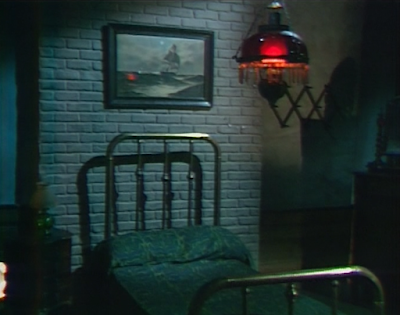