In the drawing room, Quentin offers to go first. He draws a lottery slip, followed by the rest of the family. Everyone holds the folded slips of paper. Quentin starts to open his, and Flora offers to go first. She shows that her slip is blank. Quentin's is as well. Julia's is also black. Gabriel says he can't bear it. Morgan open his, which is also black. Catherine opens hers, and embraces Morgan. Gabriel suggests that she has the X, and she tells him that it's blank. Quentin tells Gabriel to open his, but he refuses. He throws it down. Morgan opens it and it has the X. They tell Gabriel he has to go into the room. Gabriel runs out of the drawing room and locks the door behind him. Quentin and Mogran unlock the door and chase after him. Catherine tells the women that it's not fair. She says what they've done to Gabriel is revolting. 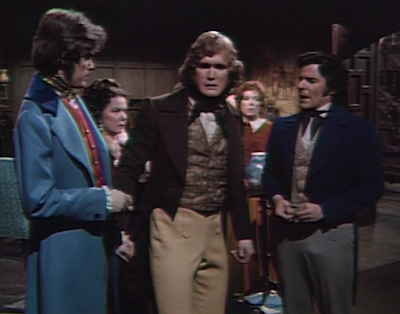 Gabriel runs through the woods. Morgan and Quentin run past where he's hiding. When he steps out of the shadow, they appear and grab him. Quentin reminds him that he said he'd take it like a man if he were selected.

Julia throws the lottery slips in the fire. Quentin and Morgan return with Gabriel, and Julia tells him he should be ashamed of himself. Julia tells them to lock Quentin in the tower room. She says they'll give him anything he wants, including as much liquor as he needs. Morgan and Quentin lead him upstairs. 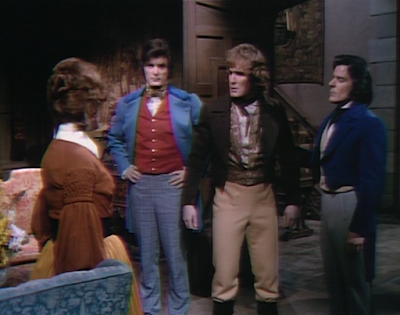 Catherine is pacing in her room when Julia comes to see her. She says she needs to talk to her about her attitudes. She blames Catherine for Melanie's illness, explaining that the lottery was postponed because of her. Julia cautions her not to impose herself on the house so quickly. She reminds her that she's not the mistress of Collinwood. She adds that since Catherine objected to the lottery, she assumes that she'll attempt to change the outcome. She tells her that the curse must be appeased — there is no other way. 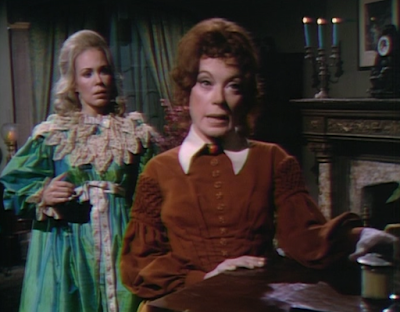 Quentin and Morgan lead Gabriel to the tower room. They close the door and lock him in.

Flora tells Morgan and Quentin that she wants to visit Gabriel in the tower room. They refuse. She tries to convince them that she only plans to comfort him. Morgan hands her he key. After she's gone, Morgan suggests that one of them should watch her. Quentin says it's not necessary. Quentin pours himself a drink, and then behaves strangely. Morgan offers to get the doctor.

Flora visits Gabriel. He asks if she's come to let him out. He begs her to show him mercy. She tells him that they're helpless to change their destiny. She gives him a book, which she says was his father's favorite book on meditation. Gabriel swings open the door, only to find Morgan standing in the doorway. Flora leaves. 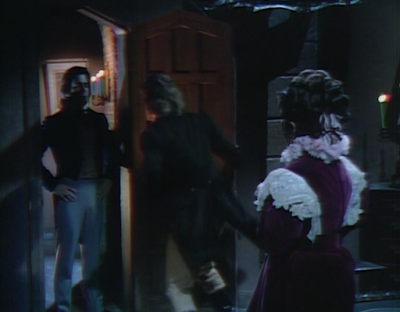 Julia finds Quentin on the floor in the drawing room. He tells her to stay away; suggesting that he has the plague.

Morgan tells Catherine Melanie is weaker. He says she just needs to survive another night. Catherine mocks him for thinking that her condition will change when Gabriel goes into the room. She says that it would be kinder to shoot Gabriel to death. She tells him that Julia lectured her about trying to impose her feelings on the family. She says she felt humiliated. He assures her it will never happen again. Julia comes in and he tells her he wants to talk to her. She says there's no time, that Quentin has the plague. 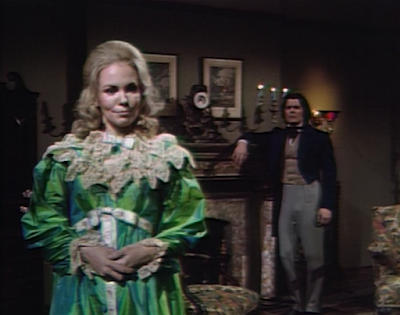 Flora comes downstairs and confirms to Julia that Quentin has the plague. Julia says that by the next night they might all have the plague. Morgan suggests that they put Gabriel in the room tonight. Flora says there's not enough time tonight, and they must wait. She says they should tell Gabriel about Quentin. Morgan and Julia go upstairs to do that.

Julia and Morgan go to the tower room, and find that Gabriel's no longer there. 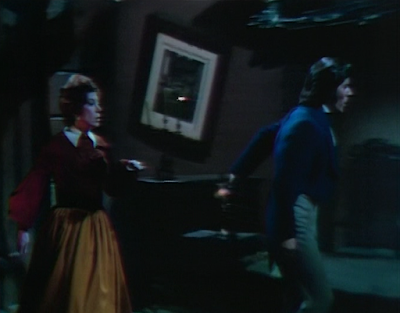 John: I thought the writers were on track to prove me right, leaving Catherine and Gabriel as the last ones to check their slips. Of course when Gabriel ended up with the marked slip, my first instinct was that Catherine is some sort of witch, and managed to switch the marked lottery slip with Gabriel...
Christine: It is hard to let go of the fact that these are completely different characters than the ones we knew so well in the past. I keep forgetting Julia is not a doctor.
John: While they don't bother specifying what time it is, doesn't it seem odd that throughout the entire episode, it's deemed too late to lock Gabriel up for the night. I'd sure love to understand the logic behind that. It sure seems like another case of the writers just making up the rules as they go for dramatic purposes...
Christine: As Flora explained, whoever spends the night in the room has to spend a full night. There's quite a difference between going in to spend the night at 7 pm as opposed to going in at 2 am.
John: Do you think Gabriel jumped out the window? That would be a funny way for him to avoid suffering, while stiffing the rest of the family, forcing someone else to take his place in the room.
Christine: Perhaps the Tower is another parallel time room and he's escaped to another time. The family might have tried consoling Gabriel by reminding him that there was a possibility that he could survive the experience. Maybe alcohol is the bullet proof vest needed to survive the night in the Cursed Room.
Posted by John Scoleri at 6:00 AM