Melanie pounds on double doors and begs to be let in, saying, "I want to be with you!"

Julia comes downstairs and asks Morgan if he's seen Melanie. He says she knows she's been locked in her room. He asks if she's mad and wandering around with a knife. She says she is. She tells him they meant no harm. She tells him that Stella didn't leave Collinwood. She says Justin almost killed her, and they saved her, but they had to lock her up in the tower room. Morgan says they must let her out. She says they can't, because she'd dead. She says that she was strangled to death. He says he'll find Melanie and have her committed. Julia says it's not Melanie's fault. She blames the spirit in the house. She asks how he'll explain Stella. She says they have to dispose of her body, and they need his help. She pleads with him, asking what if they take she and his mother away. He agrees to help her. He laments not having a moment of happiness in their lives. She reminds him that he has Catherine. He asks if he'll have Catherine tomorrow, or if she'll lead him through his world of madness like his mother and father. He tells her he'll take care of things so that no one ever knows about Stella. 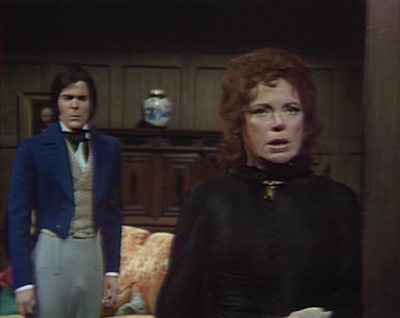 Bramwell comes to see Catherine. She tells him to go away, but she refuses. He reminds her of what she said yesterday. She says she loves Morgan. He tells her that he loves her, and kisses her. She tells him not to be gentle with her. She then manhandles him and he drags her towards the bedroom. She pulls away from him and says that he's a demon, and the demons in her are in league with him. She tells him to get out, saying she doesn't want him any more. He says she always will, and he'll be back because she wants him back. 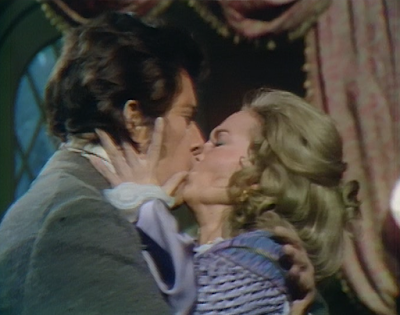 Melanie wakes up and finds herself in front of the locked door. She wonders how she got there, and then runs away.

Morgan returns to the drawing room and asks Julia if she found Melanie. She says no, and asks him if it's done. He says the body is gone, and she'll reside forever at Collinwood. Melanie comes in and Morgan says he knows what she did with her. Julia tells him that he knows. He says he knows she murdered Stella. Melanie says she was just talking to her, and she was alive. Morgan asks if she was alive when Melanie was in her room? Julia asks him to leave them alone. He tells Julia that Melanie is her and his mother's problem, and his solution is the only way out. He leaves, and Melanie asks Julia if she thinks she killed Stella. Julia says if she was involved, she doesn't think it was her fault. Melanie says she can't remember things. Melanie says she didn't murder her, she just went to her to ask her not to turn in she or her mother. She says that she went to her room. And then she woke up in front of the locked room. Julia asks if she remembers being locked in her room. She says it's still locked now. Melanie wonders if she did kill Stella. 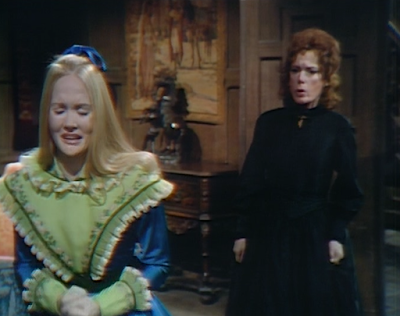 Catherine comes to see Morgan. She asks him to hold her. She asks him if he loves her, and he says more than anything in the world. She begs him to marry him tonight. He says of course they can be married tonight. He asks if something is wrong for her to have decided this. She says she was alone, worried about him, and decided that he needed her now, more than ever. She tells him that she loves him, and kisses him. He says he'll call the minister. She asks if they can make it simple and quiet. Before he goes to get the minister, he asks her if she's sure she wants this. She assures him that she does. 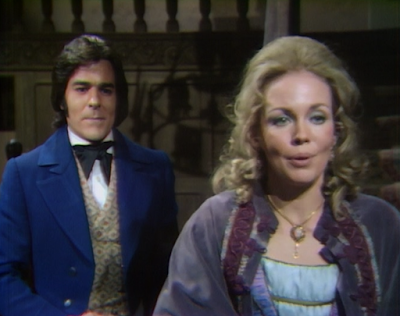 Melanie meets Kendrick in the gazebo. She says that she asked around, and Stella left Collinwood two weeks about. He says they could be lying to her, too. She says there's no need for him to come to Collinwood anymore, and then starts to cry. He consoles her, and they kiss. She begs him not to come back, ever again, and runs off crying. 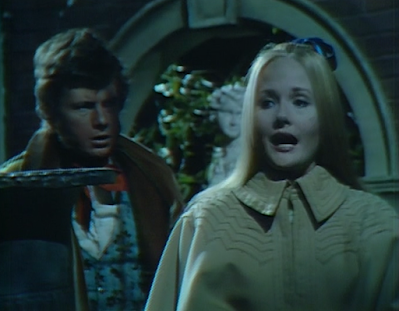 Melanie runs into the drawing room, crying. Bramwell asks if he can help her. She says that no one can. She asks if he knows about her. He says he knows she's a very lovely young woman. She asks if he knows that she's mad. He says she doesn't seem to be. He asks her what she means. She says she needs to tell someone when Morgan comes in. He says he came to tell Flora that his mother is back from Boston. Morgan asks Melanie to tell their mother, in case he forgets. He then sends Melanie up to her room. She tells Bramwell that they can talk soon. Morgan asks about Bramwell's ship coming form the orient, which will finally make him a wealthy man. Morgan then says tomorrow may be quite different for him... and after pausing, says because his ship coming into port, and then laughs. 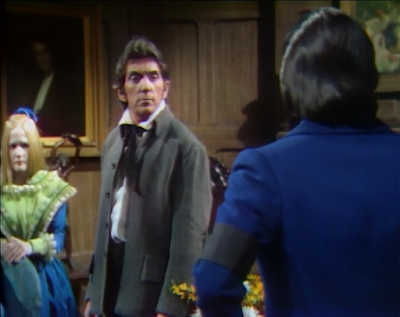 Catherine and Julia come downstairs. Julia asks her if she's certain this is the right thing to do. She tells Julia that she's never been more sure in her entire life. They go into the drawing room, where Morgan waits with the minister. He begins the ceremony, and when he asks if any man knows any reason why they should not be joined, Bramwell steps into the room. 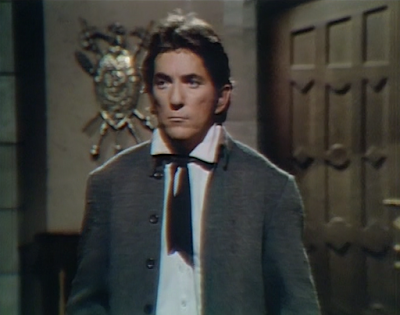 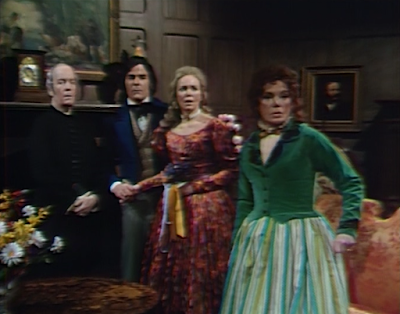 John: What's this about Stella being strangled? If Julia was planning to ask for Morgan's help disposing of her body, why would she lie about that. And if she's not lying, why on earth would they change the story between yesterday and today? Since we didn't see her body again, we can only speculate the explanation  for the change in how she died.
Christine: It was quite clear in yesterday's episode that she had a knife protruding from her chest, so that was confusing to hear. Perhaps they are trying to sow doubt that Melanie was responsible for killing her, and trying to have us believe that someone else may have done it.
John: What in the name of all that is holy is going on between Bramwell and Catherine? "Don't be gentle with me?" You go, Catherine. And then she does an about-face and flips out on him. Do you think they're literally possessed by demons? Or that she's afflicted with the same multiple-personality madness that Melanie is experiencing?
Christine: They may be possessed by the horned god though more likely just the horn dog. What the heck was Bramwell doing running her off to the bedroom? Doesn't he know the standard thing to do is sweep her up in his arms and carry her off to the bedroom? It also would have prevented her from ducking away from him.
John: I'm beginning to think that Morgan is going to die in a duel with Bramwell before he has a chance to spend a night in the locked room and go mad! Just imagine, it could be like a replay of Barnabas and Jeremiah in Episode 384 all over again!
Christine: It was strange that the minister would ask if any man had a reason why they shouldn't be joined when there were only 4 people in the room, and the only other man in the room was the groom, but I guess that's to be expected when you've got Mr. Best, straight from the underworld, to conduct your impromptu marriage ceremony.
Posted by John Scoleri at 6:00 AM