Julia returns to Collinwood and Flora tells her that Melanie has the plague. Julia doesn't understand how it's possible. Flora reminds her that it happened in the past when their relatives refused to hold the lottery. She explains that they held a seance, after which Melanie was afflicted. She says a doctor is with her, along with Quentin. Flora tells her she wants to convene a family meeting.

Morgan tells Catherine that the doctor won't let him in Melanie's room. Catherine says that she was all right just a few hours ago. He explains that it's the result of the curse. She dismisses him, and he says it's all due to the curse. Julia comes in and tells them Julia wants to meet in the drawing room.

Flora tells Gabriel to relax, and not to resort to his usual means. She tells him to give her his flask, which he reluctantly does. She tells him she'll return it when they're finished. He asks her if Melanie is going to die. Julia, Morgan and Catherine come in. Flora explains that there's no normal way Melanie can be saved from the plague. Catherine wonders if she actually has it, and Quentin, standing at the doorway, says there's no doubt about it. Flora confirms that they will hold the lottery tonight. Catherine speaks up and suggests that the lottery not be held. Flora says that's impossible. She reminds Catherine that Melanie is upstairs dying. Quentin tells Catherine that she can believe as she wishes, but if they vote, she'll lose 5 to 1. 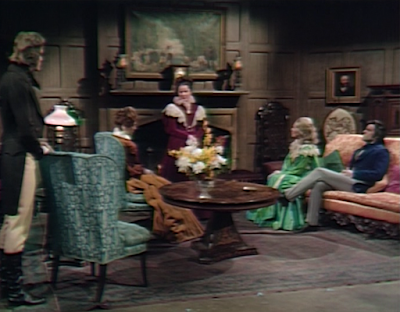 As Quentin steps into the room, Gabriel tells him to stop, pointing out that he has been exposed to the plague. Quentin says they will all get it unless they go through the ceremony. Flora agrees. Gabriel suggests they burn the house down. Quentin reminds him that some of their ancestors tried that unsuccessfully. Flora says she will prepare six slips. Morgan insists that only the men participate. Quentin agrees. Julia aligns with Flora, saying they should all participate, adding that they have precedent on their side. Quentin asks if she'd have them involve Melanie as well. Quentin and Morgan press Gabriel to weigh in. Gabriel points out that they haven't heard from Catherine. She speaks up, saying that she agrees that the women should participate. Morgan tells her that she can't be serious. Catherine explains that it doesn't matter if she believe in the lottery. Flora tells him that they will vote. They go around the room, and Gabriel casts the deciding vote . . . and he votes yes. Quentin grabs him and threatens to put him in the room and throw away the key. Flora tells them that she will let them know when the slips are ready. 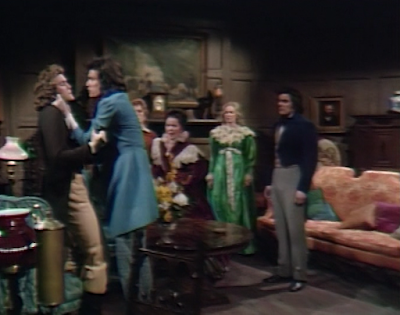 Gabriel takes a drink from a hidden cup. Morgan comes in and says he could kill him with his bare hands. Gabriel reminds him that will increase Catherine's odds of being selected. Morgan points out that he decreased his by voting yes. Gabriel tells him it makes no difference to him what he believes. Gabriel says he voted no to save his wife. He adds that if it was just Julia and their mother, Morgan would have voted yes. Morgan denies it. Gabriel tells him to go spend what may be his last night with his wife. 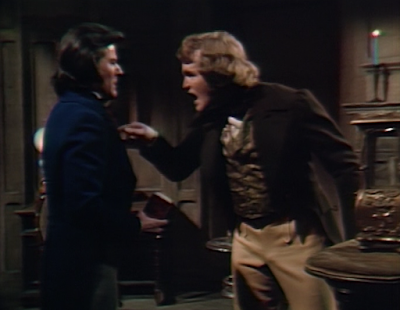 Morgan tells Catherine that if she picks the losing slip, she must let him take her place in the room. She tells him that's out of the question. He says he won't have her life jeopardized by his coward brother. She says it's too early to worry about.

Gabriel continues drinking when Quentin comes in, and tells his brother that he'll stand as a monument to losers. Quentin asks Gabriel how he'll feel when their mother chooses the losing slip, and goes into the room only to die, or emerge mad. Gabriel says he doesn't think she'll draw the losing slip. Gabriel says if he chooses the losing slip, he'll do his duty. Quentin says he wouldn't be surprised if Gabriel struck up a bargain with whoever is in the room to sell out the entire family. Gabriel asks Quentin to promise to kill him if he comes out of the room insane. Julia arrives and tells them that Flora is ready. 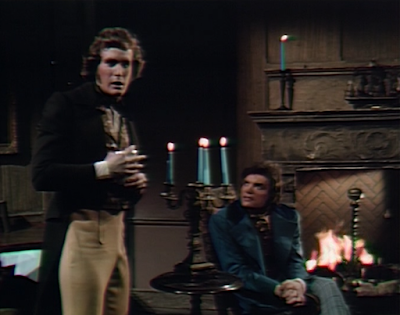 In the drawing room, Quentin offers to go first. He draws a slip, followed by the rest of the family. 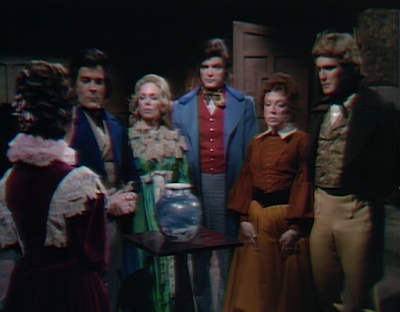 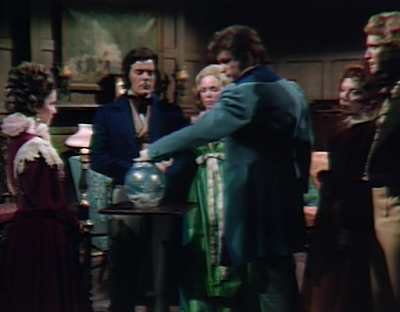 John: Sad to report that news of Christopher Pennock's passing on February 13th. Gabriel was in particularly fine form today as he let his brothers down by siding with the women when it came to lottery eligibility. 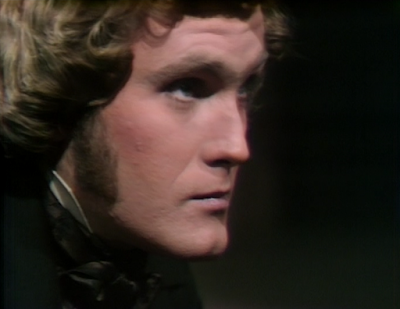 Christine: It was a delight to see him on Halloween enjoying pizza and beers with his buddy James Storm, making the sudden news all the more sad indeed.
John: As soon as Catherine suggested that women should also participate in the lottery, I think they telegraphed that she would be the one selected. I guess we'll find out for sure tomorrow!
Christine: I thought it was when Morgan said she should let him take her place if she drew the slip that indicated she would be the one. I'm betting he'll change his mind once that happens.
John: Poor Flora was having trouble using that fountain pen... I was beginning to think that none of the slips would have the X on it.
Christine: For all his bravado, Morgan was in no hurry to draw a slip, allowing his wife to go before him. 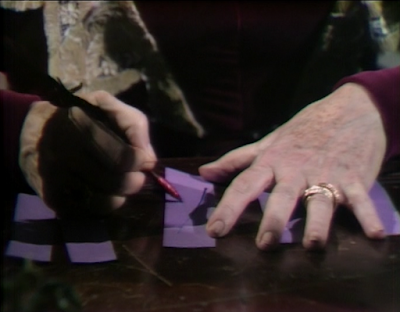