Catherine visits Bramwell at the old house. He explains that Daphne has gone into the village, and she asks to come in to speak to him privately. He lets her in. She says she didn't faint due to a dizzy spell. She tells him that she's pregnant — with his child! He asks if she's sure, and she confirms that she is. She tells him that she didn't tell him to hurt him, and he replies that he's always dreamed of having a child with her. She assures him that it's not Morgan's child. She says that she knew he shouldn't have married Daphne. He says there's only one thing to do — the two of them will leave Collinwood forever. He suggests that they go to the South of France and rent a villa. She brings up Daphne. Bramwell says he would send her to hell if it would solve anything. She tells him Daphne will find hell enough here with him. He asks what she wants from him. She says to let her go back to her husband. Bramwell points out that it's his child, and Catherine says that it will be the child of who she says it is. 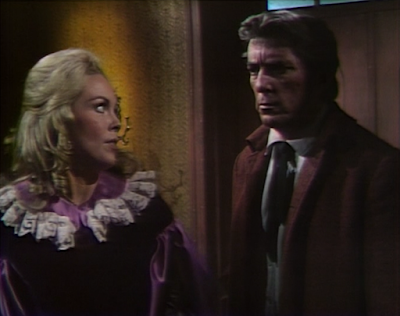 Flora is shocked to hear that Bramwell and Daphne have married. She tells Julia they must decide on a gift. Morgan says they have more important things to worry about. Quentin comes in and says he's been to every sleazy boardinghouse looking for Gabriel. He says that he saw Kendrick Young at the police department, and he's intent on finding Gabriel. Morgan doesn't understand how no one has seen Gabriel. Quentin points out that he could be dead. Flora says they will proceed with the lottery this afternoon, with or without Gabriel. Morgan says that Carrie Stokes found a letter in the cottage addressed to James Forsyte, from someone with the initial A. He says that after reading it, the letter burst into flames. Quentin says there may be other letters. Flora tells him that they only have a few hours, adding that everyone needs to be there, including Catherine. 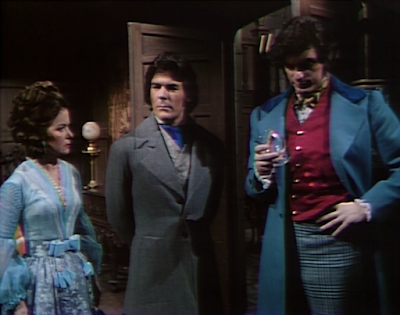 Morgan and Quentin dig through letters in the basement of the cottage. Just as they're about to give up, Morgan finds a document on James Forsythe. They find a reference to Brutus Collins, and someone with the initial A. Quentin points out that Brutus' wife was named Amanda. Quentin finds a date that links it to the time the curse began. Quentin wonders why the spirit didn't burn the letter they have. 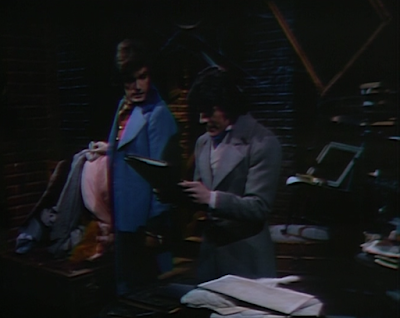 Catherine returns to Collinwood and Julia tells her she missed the meeting. She tells her the lottery will be at 3 o'clock. She then asks what the doctor said. Catherine makes up a story that Julia doesn't believe. She demands that she tell her the real reason she fainted. Catherine doubles-down with her denial. Julia reminds her that they've known each other for a long time. She asks Catherine what's really wrong. Catherine tells her that she wants to be her friend. Julia is reluctant to commit.

When the boys return without more information on the curse, Flora says that they will proceed with the lottery. She then spells out the rules, and asks if anyone will refuse to do what has to be done if chosen. Quentin says that one Gabriel in the house was more than enough. They each draw and take turns unfolding their slips of paper. It gets down to Morgan and Catherine. They open theirs at the same time, and Catherine announces that she was selected. 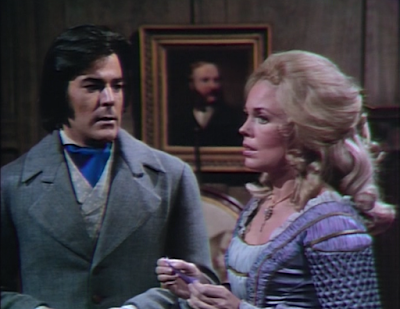 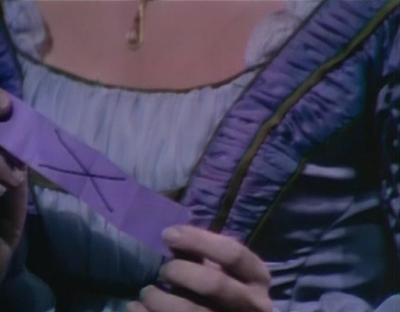 John: Was anyone expecting that response from papa-to-be Bramwell? I can't believe he volunteered that he'd send Daphne straight to hell. Not exactly a solid foundation on which to build a marriage.
Christine: The whole purpose to marrying Daphne was to try to get Catherine back, and he may have been hoping the news of a child together would be the ticket to bring them together. Who really believes he'll be okay with letting Catherine pass his kid off as Morgan's?
John: Can't say that I'm particularly interested in the Brutus/Amanda/Forsythe love triangle. Just get over it and explain why there's a curse already!
Christine: Right. Unless we're about to travel back in time to meet those characters next...
John: Can't say that Catherine being selected in the lottery was much of a surprise. The only question is, which of her competing paramours will step in to do as they promised? Morgan suggested that he would take her place if she was selected, and Bramwell has threatened to tell the truth before letting her go into the room. Or will it be something behind door number three?
Christine: Perhaps we'll find out that James Forsythe is about to be reincarnated as her unborn child and she'll survive the night in the room because of it!
Posted by John Scoleri at 6:00 AM