Upstairs, Melanie catches Julia coming out of the locked room with an empty tray. She asks her who's in the room that Julia's bringing the food to. Julia assures her there's no one in the room. Melanie runs past her and goes inside, where she finds Stella tied to a chair with a gag in her mouth. She removes the gag, and Stella asks her for help. Melanie asks Stella why they put her in the room. Stella mentions Justin, and Melanie says he had nothing to do with it. Julia says he did. Stella says he tried to kill her. Julia says she tried to keep the truth from everyone. 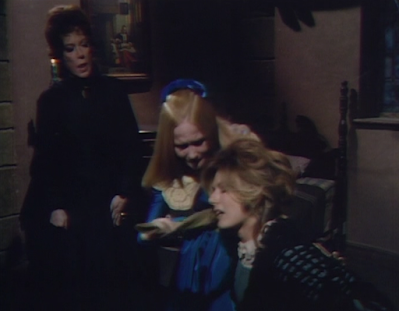 Flora explains to Melanie that she and Julia stopped Justin from killing Stella. She says that if they didn't lock her up, she would have gone to the police. Melanie says she understands, but it's wrong. Julia asks Melanie if she wants the police to come, and she says they can't do anything to her father now that he's dead. Flora points out that she and Julia could get in trouble for kidnapping her. Julia says her brothers will never accept their actions. Melanie says that she understands, but they must have known they couldn't keep Stella locked up. She says her brother was there, and she pledged to help. Flora says they will let her go, sometime after the funeral. Julia is surprised to hear it. Melanie says that after the funeral, they must set her free. 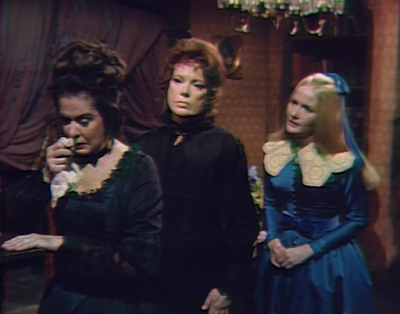 Quentin and Morgan are in the drawing room with their father's coffin. Quentin assures Morgan that Melanie won't try to harm Catherine again. Morgan tells him that she most certainly will. Quentin says that there is a penalty for not having a lottery. He says he really believes if they had gone ahead with the lottery last night, Melanie wouldn't have tried to kill Catherine. They wonder what will happen today, on the day they bury their father. Morgan says that Gabriel is drunk, and in no condition to go to the funeral. They are surprised to see the vase used for the lottery sitting on their father's coffin. Quentin picks it up and reaches inside. He pulls out a letter with a list of names. His, Morgan's Gabriel, Melanie, Flora and Julia. He says it's the list of names to go into the lottery. He tells Morgan to compare the handwriting to Brutus' letter. Morgan tells Quentin that there's going to have to be a lottery. He says they can't tell their mother what happened. Quentin asks if Melanie's attack on Catherine was linked to the ghost, and if so, what will she do next. 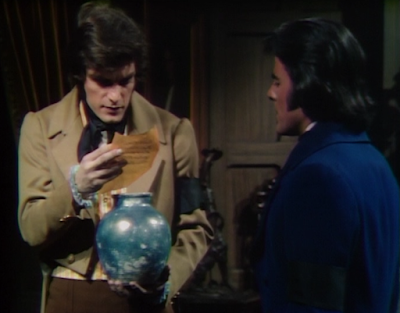 Melanie tells Stella, who's still tied to a chair and gagged, that she'll be set free tonight. She tells Stella that her father is dead now, and begs her not to make any more trouble for her mother and Julia. She tells her to think about it. She leaves the room and locks the door behind her.

Flora tells Quentin she's remembering his father when they first met. Melanie comes in, and when her mother asks why she's not ready for the funeral, she laughs hysterically. Melanie talks to her father through the closed coffin, telling him that they don't realize that the lottery must happen again. She laughs, and say they deserve it. Quentin takes her and asks her to come with him. She tells him that he's the most attractive. Flora starts to cry, and Melanie tells her that tears aren't going to do her any good. Quentin drags her out, and she asks the coffin why Melanie had to go into the locked room. Morgan comes in, and Flora tells him that Melanie has had another attack. He tells her that they have to put her away. Flora tells him never to speak that way again. 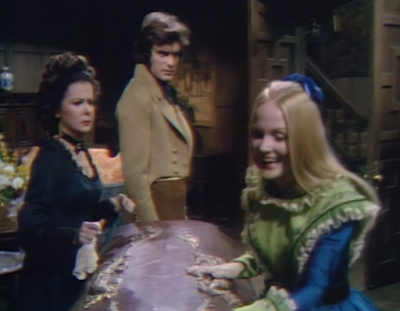 Melanie asks Quentin if he thinks locking her in her room will change what's going to happen. He says it's probably best that she not see her father buried, and locks her in the room.

Julia tells Morgan and Flora that the hearse is there. Flora asks about Gabriel, and Julia says he won't be attending the funeral. Flora angrily stomps out of the room.

Quentin speaks about his father at the funeral. After he finishes, they all begin to leave. Morgan stares in shock when he sees the woman in white. 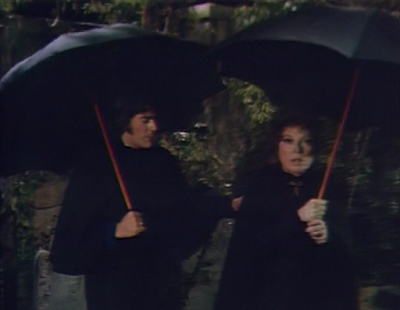 Melanie asks Quentin whey he locked her in her room. He asks her if she remembers what happened in the drawing room. She describes having a dream, and he tells her that she had an attack. He reminds her that she's had attacks ever since going into the room where their father was. He asks if she remembers the rest home where she stayed after she came out of the room. Quentin says she becomes a different person when the attacks occur. He says that if they can find out who she is when the attacks occur, they may be able to find out something about the curse. She asks Quentin what she's like then, and he says if he could make any sense of it, he wouldn't have told her. 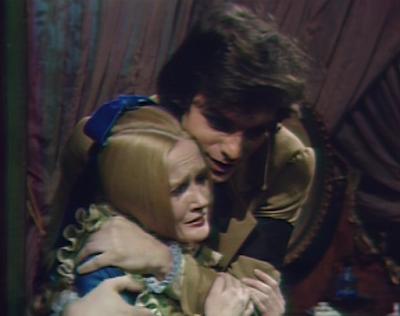 Julia tells Flora that they must do something about Stella. She says she has $5000, and thinks they should offer it to Stella under the condition that she leave Collinsport tonight, and never tell anyone about what happened.

Julia and Flora go into the room and find Stella on the ground dead with a knife sticking in her. Flora assumes that Melanie is responsible. They go to Melanie's room, but it's empty. The door was locked from the outside, but they can't figure out how she got out. 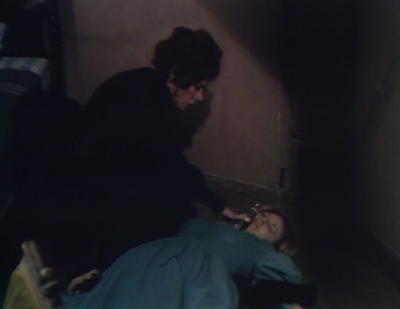 Melanie pounds on the double doors to the cursed room and begs to be let in. 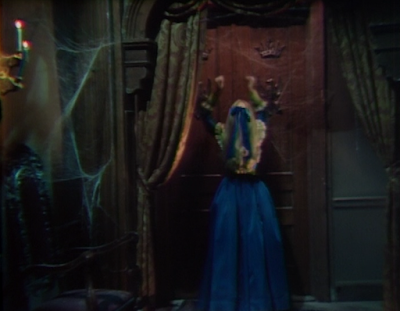 John: What kind of logic has you locking up a girl who was almost killed in your house? It seems like letting Justin kill her wouldn't necessarily have been a bad idea.
Christine: You think they would have considered paying her to keep silent instead.
John: Morgan just got through promising Catherine that Melanie wouldn't try to harm her again, and now he's telling Quentin that she most certainly will! Not the best foundation to build a relationship on, Morgan! Of course, you can't believe half of what people tell one another...
Christine: That was odd, wasn't it? Perhaps Catherine should reconsider marrying Bramwell.
John: Claiming Gabriel was too drunk to attend his father's funeral was a good way to cover for his having the day off today! And nice use of umbrellas to try and convince us the funeral was more populated. Of course, I was once again disappointed that the woman in white made another non-appearance appearance.
Christine: It makes me wonder if they are going to eventually reveal her and have her be somebody we already know. The umbrellas had me thinking of the funeral in House of Dark Shadows. The only thing missing was the rain. 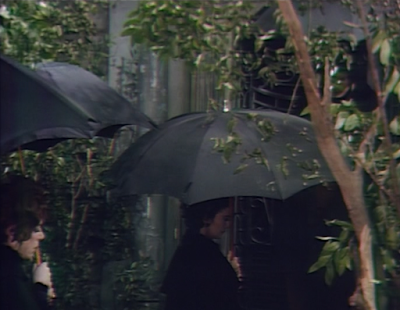