Quentin and Julia return to Collinwood and find Melanie in the drawing room. She tells them that 'he' told her that the curse isn't over until a Collins goes into the room. Quentin asks her who spoke to her. She says it was Poppa. Quentin says he knew it; they have to have the lottery again. He goes to find the others. Melanie asks Julia when the curse will end. Julia tells her to go to her room to get some rest. 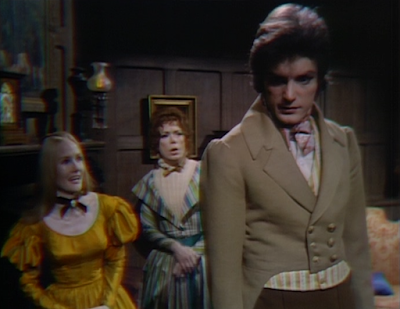 In the woods, Quentin hears someone, but no one responds to his calls of who's there.

Carrie is not surprised when Quentin arrives to see her. He comes in and she asks if someone is waiting for him outside. He tells her that he came alone, and she tells him that someone followed him. He looks outside in time to see someone leaving. He asks her how she knew that. She explains that she just felt a presence. Quentin asks Carrie to concentrate on the name James Forsythe, and tell him whatever she can about him. He tells her it's important, but he can't tell her why. She does so, and she tells him she can see Collinwod of long ago. She says two people are approaching the house; James Forsythe and a woman. He asks about him. She says he's young and handsome, and he lives in Collinwood. She adds that he's in love with her. He tells her that no one named James Forsythe lived in Collinwood. He then asks her about the woman. She says she sees them about to enter the house — and the nothing. She tells him that James Forsythe is somewhere near Collinwood. Quentin says if what she saw was a long time ago, Forsythe would be dead. She says she can't explain it, but she feels that he's close. Quentin thanks her and heads back to Collinwood. 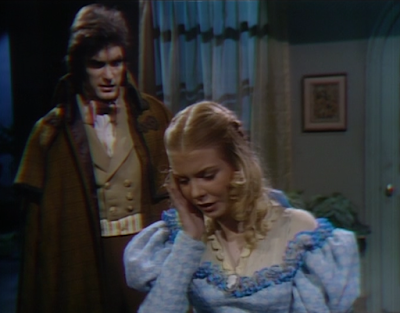 Quentin hears someone following him in the woods and confronts his follower. It's Kendirck Young. He tells Quentin he was on his way to Collinwood, and that he wasn't following him. Quentin asks him why he's going there, and he says he heard Melanie was sick. Quentin tells him that she was, but she recovered. He adds that there's no need for him to pay a visit. He tells Quentin that he'll do what he wants.

Melanie is in the garden when Kendrick arrives to see her. She thanks him for coming, and says that if she weren't so tired he could stay longer. He tells her about his life in Boston, and she asks why he's telling her. He explains that he wants her to know him, as friends. He asks her what's troubling her. She tells him that sometimes friends have to trust one another, and asks him to trust her. She tells him he's different from the other men she's met; gentle and thoughtful. He suggests that all the other men she met must be Collins'. She says she can't relate to anyone in the real world, and he offers to help her. He kisses her, and she kisses him back. 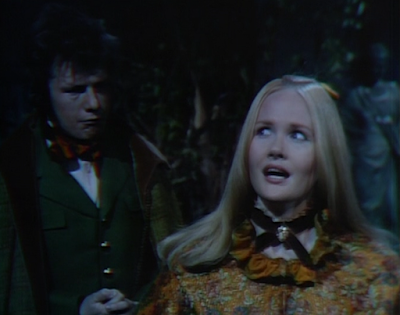 They are interrupted by Julia. She asks Kendrick what he's doing, reminding him that he's not welcome. She tells Melanie to go into the house, and Melanie tells her that she's not a child, and she will choose her own friends. She says she'll go into the house if Kendrick can come with her. Julia says that if she lets her speak to Kendrick alone, she'll let him join her in the house. She goes inside. Julia tells him not to see Melanie again. He refuses. She asks what he's after, and he explains that he's after nothing. Julia explains that Melanie has led a sheltered life. She asks him what it will take for him to leave and never come back. He asks why the Collins' are all so miserable if money can buy everything. She asks him how much. He tells her no amount would be enough. He reminds her that Melanie can leave tonight, and she can't stop her. Julia tells him that Melanie must never leave Collinwood. 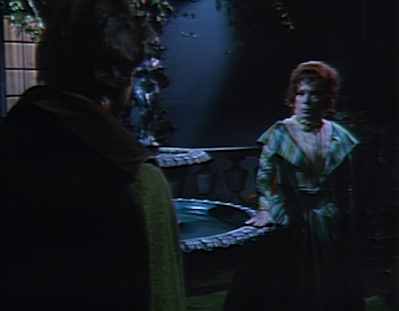 Quentin reads from the Collins family history when Kendrick comes into the drawing room. He asks how Kendrick ingratiated himself with Julia. He says he didn't. Quentin says as far as he's concerned, he can stay. As long as he doesn't start asking the wrong questions. He leaves Kendrick alone. Gabriel sneaks into the room with a knife. He approaches Kendrick and tells him that the same thing that happened to his sister is going to happen to him, too. 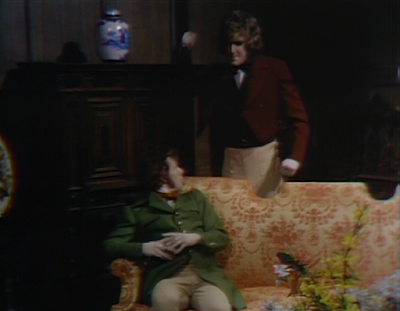 John: So much for any urgency getting a new lottery going. I'm betting we don't have a new sacrifice scheduled before Friday...
Christine: I think the urgency is with finding Gabriel to send him back into the room since he seems to be the least liked member of the family.
John: I love how Quentin gets a cursory description of James Forsythe from Carrie, and suddenly he knows that her vision was from so long ago that Forsythe must be dead. Since it's parallel time, making things up as they go is a foregone conclusion. Do you suppose he's the cause of the curse, in response to something Brutus did?
Christine: He may or may not be the cause, but surely he has something to do with the Cursed Room or they wouldn't keep talking about him. I love how Carrie knew that Quentin was about to arrive but had no idea why he had come to see her. I guess her psychic powers have limits. Quentin alluded to the fact that a brother had killed another Collins family brother once before. I might think Barnabas killed Jeremiah in this time band too if he didn't have his portrait hanging over the mantel at the Old House. If he didn't, then who did?
John: Maybe Gabriel has gone crazy from his limited time spent in the room... Of course, I wasn't quite expecting him to find his way home. If he was smart, he would have gone away and never looked back!
Christine: One thing we do know is that Gabriel has multiple pairs of the same outfit, assuming of course that Tim Braithwaite was buried in the clothes he had loaned him to assume his place in the Cursed Room. 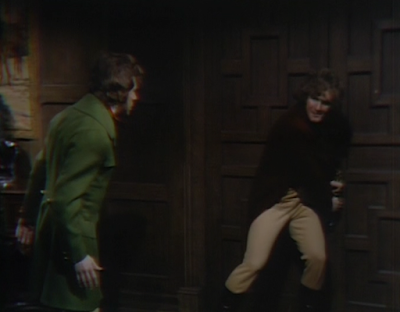