Catherine and Julia come downstairs. Julia asks her if she's certain this is the right thing to do. She tells Julia that she's never been more sure in her entire life. They go into the drawing room, where Morgan waits with the minister. He begins the ceremony, and when he asks if any man knows any reason why they should not be joined, Bramwell steps into the room. He tells Catherine that she will not marry Morgan. Morgan tells him to get out. Bramwell pushes him aside, saying the marriage is a mockery, and grabs Catherine and kisses her. Morgan pulls him away and punches him. Bramwell knocks him down. Bramwell grabs Catherine and tries to drag her out, but Morgan stops him. They continue to fight until Bramwell bests Morgan, knocking him unconscious. Catherine tells Bramwell she'll never go with him. Julia tells Bramwell that he did what he came to do, and there will be no wedding this night. She tells him to get out. Catherine tells him she never wants to hear him say her name again. Bramwell runs out. 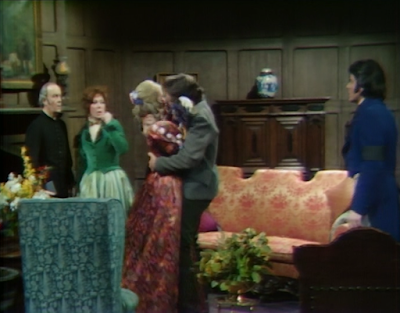 Melanie comes to see Bramwell in the old house. She finds her cousin Josette. She says she doesn't know where Bramwell is. Josette says that it's better that she and Bramwell aren't in Collinwood's inner circle. She says Melanie interests her because Justin, before he was mad, loved her so much. Melanie tells her that she must find out who her parents are, and whether they're mad, too, and locked up in an asylum somewhere. She says they think she's this way because she went into the room. She asks if Josette lived on the estate before Justin adopted her. Josette says that her husband Barnabas died two years before. She tries to assure Melanie that her parents probably weren't mad. Bramwell returns and explains to Melanie that from this day on, he will not be welcome at Collinwood ever again. 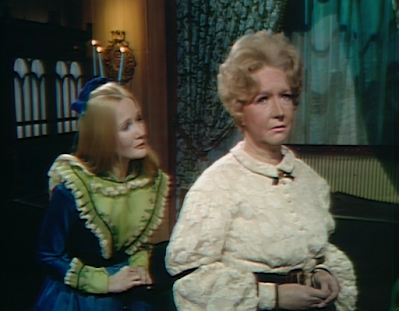 Morgan sits up, calling Bramwell's name. Julia tries to keep him in his bed, but he gets up and starts to go looking for Bramwell. Catherine arrives and tells him he's in no condition. She assures him that they'll be married tomorrow. Catherine asks Julia to leave them alone. Before she does, she tells Morgan to listen to Catherine. She tells Morgan that what Bramwell did was unforgivable. He asks her if she gave him any reason to do it. He then apologizes and says he knows that she didn't. He tells her that he will tell Bramwell to leave Collinwood. Catherine says they can just ignore him. He agrees, but only for the moment.

Bramwell tells his mother what he felt he had to do. Melanie points out that he must love Catherine so much. He wonders if his love became hate. Josette says he is like his father, so full of dark feelings. Bramwell points out that his father married the woman he loved. Bramwell regrets not marrying Catherine earlier, before he established himself. He adds that the only way it will end is when he kills Morgan. 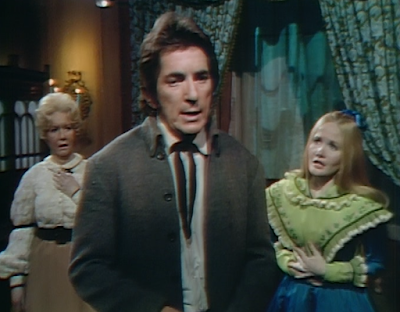 Catherine reminds Morgan that the Dr. says he's fine, and they can get married tomorrow. She assures Morgan that Bramwell will not be able to make them unhappy once they are married. After Catherine leaves, Morgan leaves, too.

Josette tells Barnabas that there will be no more talk of killing. He goes upstairs, sulking. Melanie tells her how glad she is that they talked.

Catherine is shocked to find Morgan is not in his room.

Josette tells Bramwell that he must forget Catherine. She tells him they can do without the things they desire. She bids him goodnight and goes upstairs. Bramwell hears the front door, and when he gets up, he sees Morgan. He suggests that Morgan has come to kill him. Bramwell tells him that he thinks Catherine loves him, but she doesn't. Morgan slaps Bramwell across the face with his glove, and challenges him to a duel. They agree to meet at the gazebo, and use pistols. Bramwell says there will be no seconds, as anyone who knows would try to stop them. Catherine comes in and says there will be no duel. Bramwell says it's up to them. Morgan tells her to go back to Collinwood. Julia tells them there will be a scandal. Catherine says she won't let them kill each other. Morgan leaves, ad Catherine tells Bramwell that he caused this. She leaves, and Julia tells Josette that she must stop her son for the family's sake. Josette says she's concerned for her son's life. Julia leaves, and Josette tells Bramwell that he must not do this. He says he has already accepted Morgan's challenged. He says there will be a duel, and he will shoot to kill. 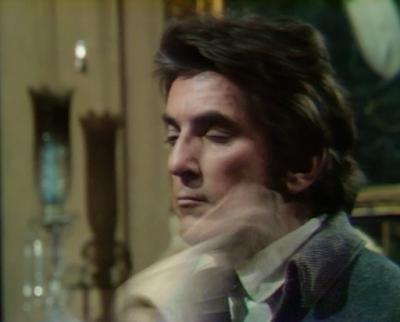 Catherine tries to convince Morgan to marry her and then they can leave Collinwood. He refuses, saying they can't have what they want until Bramwell is dead. She cries, and he asks if she's crying over Bramwell or him. She leaves, and he checks his pistols.

Julia tries to convince Catherine not to go to Bramwell, but she says she must.

Bramwell tells Catherine that Morgan challenged him to the duel. She accuses him of not loving her. She says he wants to impose his will, and make her unhappy. She says she won't let him make her a widow before she has a chance to become a bride. She asks him to write a note to Morgan saying he won't meet him. He says he can't do that. She asks if it's because of pride, or his inability to admit that he's wrong. He blames her for her insane insistence that she loves Morgan. She threatens to kill herself if Bramwell kills Morgan.

In the gazebo, Morgan takes out the guns and offers Bramwell his choice. He picks one. They agree to take ten paces. Bramwell offers to shake his hand, but Morgan refuses. They begin to take ten paces from one another. 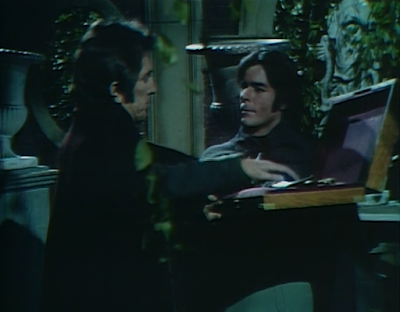 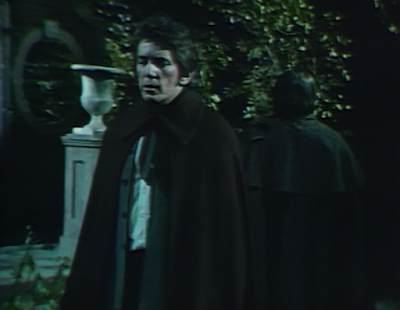 John: Bramwell's throwdown with Morgan in the opening scene has to be the worst fight choreography that we've seen to date! Morgan should have just played dead after the second knock-down. It looked rather odd for him to sit up, knock the table over, and then pretend to have been somehow knocked out by it... 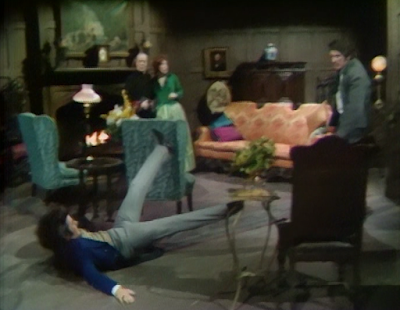 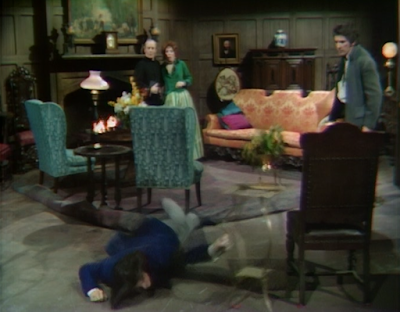 Christine: I got a good laugh out of that. You were right about the dueling. Is it too much to hope that one of them will end up a ghost like Jeremiah?
John: When Catherine calls for a doctor and Julia just stands there, I thought it was funny until I remembered that this isn't our Julia. Oh, well...
Christine: I had the same reaction. I was also surprised to see Josette, since I had already forgotten that Barnabas was Bramwell's dad, and that there's a tenuous connection to the characters we've watched the past four years, who've been callously written off.
John: I'm sorry. How could they tarnish Josette's name with a homely old woman? Fine, explain that she was married to a Barnabas, but it still doesn't seem right. Where's Katherine Leigh Scott when we need her! 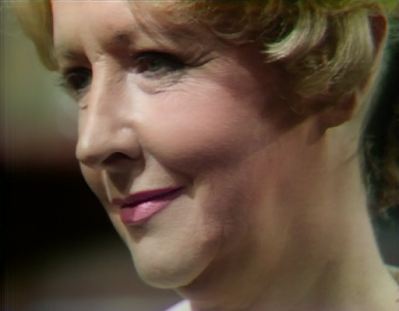 Christine: Did you expect her to remain young and svelte forever in a parallel time with no supernatural intervention? The actress portraying her is far from homely, though it might have been less jarring if they had given her a brunette wig.
John: Did you see the crew member in the mirror in the scene between Morgan and Catherine? 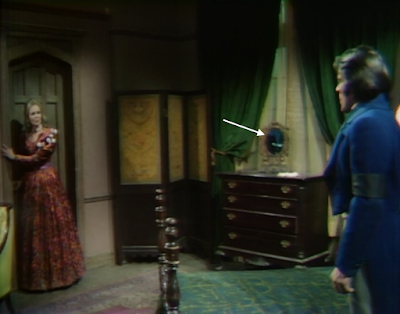 Christine: Not until you made me go look. Is this what made you forget to add the Slap Tracker?
John: I think it was perhaps because Morgan's was the wimpiest slap we've seen in the history of the show. It almost doesn't deserve to be included. But, it's a slap, so to the tracker we go!