Catherine is in bed asleep when someone sneaks into her room. It's Melanie. She raises a dagger, and is poised to strike, when Catherine wakes up. A struggle ensues. Melanie says that she's doing it for 'him.' She says he will have his revenge. Catherine screams and Julia enters and tells Melanie to put the knife down. Melanie tells Julia that she shouldn't interfere. Julia asks her to give her the knife. She says she must please him, and she cannot stop her. She tells Julia that her name is not Melanie. Julia assures her that everything will be alright. She give Julia the knife and leaves the room. Morgan comes in and asks what happened. Julia explains that she tried to kill Catherine. 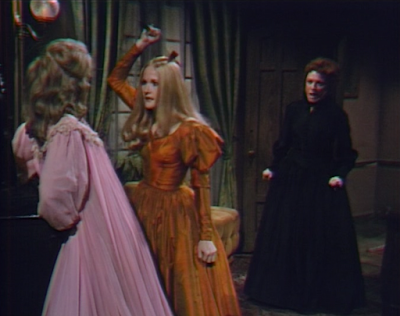 Morgan apologize to Catherine. She asks why Melanie wants to kill her. He says that she didn't understand she was Catherine. He says it's difficult to explain, and she demands an explanation. He says they should wait until the morning. She refuses. He says that 10 years ago, his father went into the locked room. He says when Melanie is in this state, she doesn't know who anyone is. He says when their father went into the room for the lottery, Melanie was with him in the room the following morning. Later the next evening, Quentin found her outside the door of the locked room. He said she looked at him as though she had never seen him before; as if she became someone else. Catherine wonders what could have happened to her in that room. She tells Morgan that she's dangerous. He explains that tonight is the first time she's shown any violent tendencies. He assures her it will never happen again. 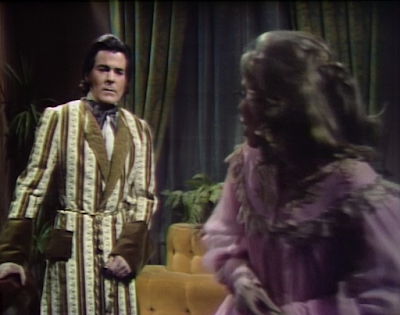 Julia tells Quentin what happened, and that had she not arrived in time, Melanie would have killed Catherine. He says that violence was inevitable. He says their father had violent streaks after he came out of the room, and now that he's dead, it had to be someone else. Julia asks if he thinks that it had anything to do with moving the lottery. Quentin asks her if she and his mother had discussed having Melanie put away. She says they can treat her like Justin, and lock her in her room at night. 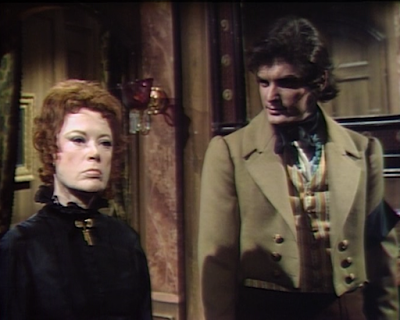 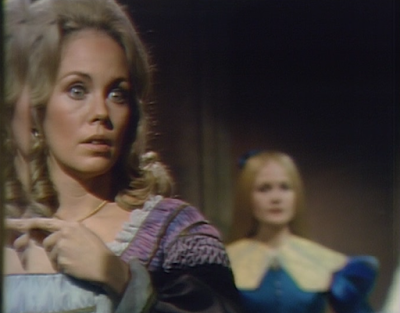 Daphne arrives at Collinwood to see her sister. Quentin is upset she didn't come to see him. He walks her up to Catherine's room.

Melanie is playing the piano when she stops abruptly. She asks Julia what happened to Stella. Julia says she left because she wasn't happy. She asks Melanie why she's so concerned. Melanie asks where she went, and presses Julia for details. Julia asks her why she's asking. She asks if it has anything to do with Stella's brother. She turns away and says no. Julia says she must tell her if she sees him on the grounds, and she must not talk to him. She explains that he's an arrogant troublemaker, and will never be welcome in the house. Melanie returns to the piano and starts to play. 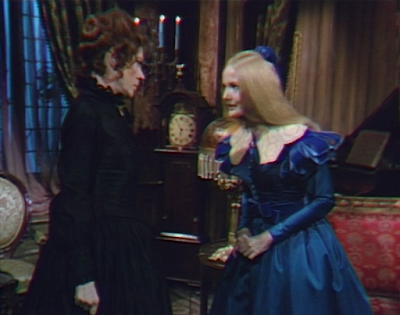 Catherine updates Daphne on the events of the past few days. Daphne presses her for what really happened that frightened her. She brings up the story Daphne had heard about the lottery and the locked room, and says it was true. Daphne says there has to be something more, and Catherine describes how Melanie almost killed her last night. Daphne says she can't marry Morgan now, or live in the house, and Catherine explains that she thinks the only thing wrong with the Collins' family is 150 years of accumulated fear. She vows to make Collinwood a happy and safe place to live.

Daphne comes to Quentin and says she knows about the lottery and locked room. She says she's pledged to secrecy, but she came to him because she doesn't know who else to turn to. She says she urged Catherine not to live in the house, and asks Quentin to promise not to let her be involved in the lottery. He explains that he can't make that promise. Once she and Morgan are married, she'll be part of the family, and may be included in the lottery.

Julia runs into Julia in the foyer, carrying a tray of food. Julia explains that she's taking the food to her room. 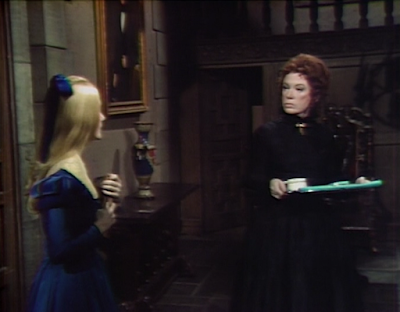 Later, Melanie catches Julia coming out of the locked room with an empty tray. Melanie asks her who's in the room that she's bringing the food to. 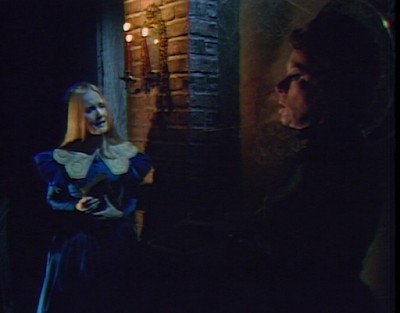 John: By the sound of it, Melanie going into the room with Justin gave her some of the residual side effects. Wouldn't that mean they don't need to do another lottery yet?
Christine: She didn't spend the night in the room, so I don't think it counts, though the rest of the family might reason that since she's already half mad, she may as well be the one to satisfy the requirements of the cursed room.
John: Why is Morgan so sure that Melanie would never attack Catherine again? Personally, I was frightened when Melanie sat down at the piano and started to play, thinking that she might break into Pansy Faye's song!
Christine: I had that same fear as well. Thank goodness she's practiced classical piano as opposed to dance hall tunes.
John: Wouldn't it be cool to find out that Julia is bringing food to Paul Stoddard in the locked room? Or Victoria Winters? Yeah, I know, wishful thinking that we might see a familiar face again. When you stack up the potential suspects, I think it's safe to rule out Justin having returned from the land of the dead. Or Trask, for that matter. Unless it's someone we haven't been introduced to yet, I think it would have to be Stella... but I can't come up with a halfway decent explanation as to why they'd be keeping her around.
Christine: If Melanie stabbed her but didn't kill her, they probably wouldn't want her to go blabbing to the police and cause a dreaded scandal for the family.
Posted by John Scoleri at 6:00 AM