In the gazebo, Morgan takes out the guns and offers Bramwell his choice. He picks one. They agree to take ten paces. Bramwell offers to shake his hand, but Morgan refuses. They begin to take ten paces from one another. Bramwell hears Catherine's voice, reminding him that if he kills Morgan, she will kill herself. At ten paces, they turn. Bramwell doesn't fire his gun. Morgan shoots him. 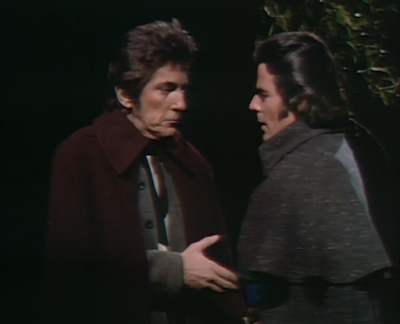 Back at Collinwood, Catherine is in the drawing room when Daphne arrives. She asks if it's really true, and if anyone tried to stop them. She says she did, and no one would listen to her. She says they can do nothing but wait. She tells Daphne that Morgan and Brawell's hatred for one another is too great. Daphne tells Catherine she knows that she never stopped loving Bramwell, and just can't admit it. Daphne notes that the sun is up, which must mean that it's over. She says she feels sorry for Bramwell being treated as less than human by his family. They hear the front door, and see Morgan. He assumes that they expected Bramwell would be the one who came back. He says that he thought so, too. Daphne asks if Bramwell is dead. Morgan explains that he's badly wounded. He says Bramwell raised his pistol, but didn't fire. He says he'll never know why. Daphne asks where Bramwell is, and Morgan  tells her that two servants dragged him back to the old house. She says they shouldn't have moved him. Morgan says he doesn't care if Bramwell lives or dies. Daphne says that she does, and runs to the old house. Morgan asks Catherine if she wants to join her sister at Bramwell's side. 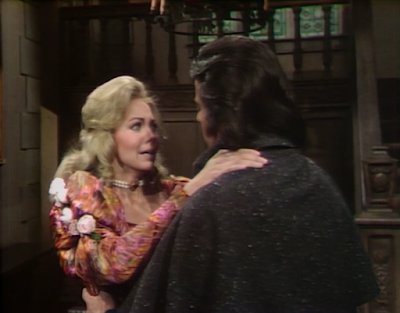 Bramwell is lying in bed as Daphne watches over him. He wakes and starts to get up. She tells him not to. She explains that she's taking care of him. Bramwell asks if Morgan is boasting of his great victory. She asks if he didn't fire his pistol because of Catherine. He says it's not true. She tells him they can each believe what they want. He asks if Catherine was happy to see Morgan alive. She says yes. He says things would have been better off with one of them dead.

Catherine says she's sorry it all happened. Morgan says that he's not, and suggests the incident will hopefully bring Bramwell to his senses. He points out that Catherine is looking in the direction of the old house, and asks if that's where she'd like to be. 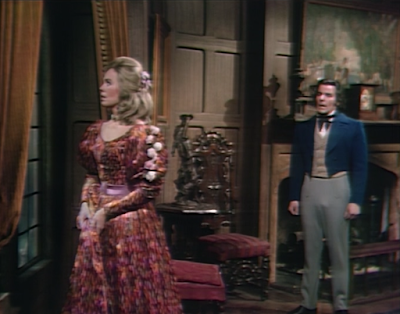 Gerard Stiles meets Kendrick Young in the Blue Whale. Kendrick offers him a drink, and asks if it's true that he has certain psychic powers. Gerard refers to them as abilities. Kendrick asks if he can locate missing persons. He says his sister worked for Flora Collins, and disappeared three weeks earlier. He says that despite what everyone says, he thinks she's still at Collinwood. Gerard asks what he wants. Kendrick asks him to help him find his sister. Gerard asks why he hasn't gone to the police. Kendrick says they were no help. Gerard says he will help him if the price is right. 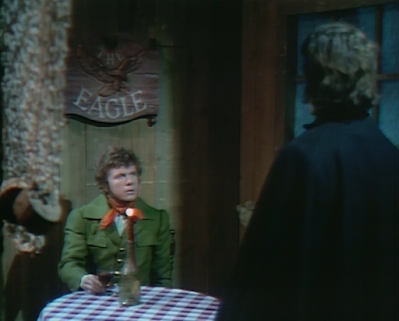 Daphne is waiting when Catherine and Morgan return. She tells them that she's been waiting for them. She says Bramwell's condition is still serious. Morgan tells her that he and Catherine just got married. She offers insincere congratulations. Morgan goes to get champagne, and Daphne tells her she should have waiting until Bramwell recovered. She says the only way they could get married was with Bramwell incapacitated. She adds that Bramwell brought it on himself. Daphne tells her sister that she should tell Bramwell. Morgan returns with champagne when there's a knock at the door. It's Gerard and Kendrick to see Quentin. Mogan offers his help in Quentin's absence. Gerard says he's there to help Kendrick find his missing sister. Morgan says he doesn't know where she is, and insists that he leave. Gerard tells Kendrick they'll do as Morgan says, and they leave. 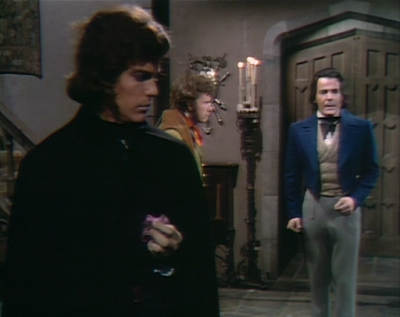 Gerard tells Kendrick that his sister is not in Collinwood. He tells them they should search the grounds of Collinwood.

Daphne returns to Bramwell to tell him about Catherine and Morgan getting married. 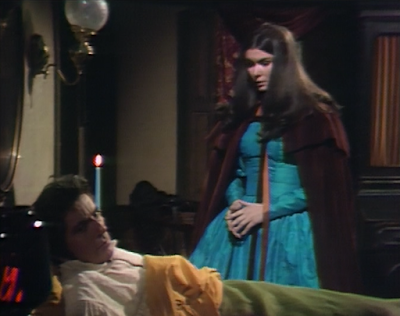 Gerard leads Kendrick through the woods, and says they must find a tool shed.

Catherine asks Morgan what's troubling him. She asks who the men were at the door. He says they were unsavory drinking buddies of Gabriel's.

Gerard moves a shovel over the earth. He tells Kendrick they are standing over an unorthodox grave, and tells him they must start digging. 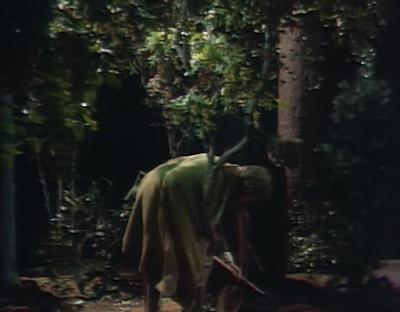 John: Why didn't you ask Bramwell why he didn't shoot you, Morgan? He's not dead yet, if you really cared to know...
Christine: He may have wondered about it, but it was clear he didn't really care why he didn't shoot. If Bramwell really wanted Morgan to drop Catherine, all he'd have to do is tell him about the afternoon they made sweet love together last week.
John: I have to say, the writers have let me down once more. It's pretty lazy to have a Gerard Stiles in this version of parallel time who seems like a carbon copy of the one we left behind.
Christine: Someone with occult powers had to show up to help Kendrick out. Or it could be that Jim Storm had a few days left on his contract to fulfill.
John: Since it seems unlikely they would have Kendrick exhume his sister's corpse, I'm going to assume that the burial plot they discovered is in fact Trask's. Not that anyone would be able to identify his remains, which I assume will be well preserved.
Christine: That hadn't occurred to me, though it would be a nice surprise. I'm still expecting them to find Stella.
John: Since everyone appears to have forgotten about it, it almost seems like we should have a tracker to see how long they go without discussing the lottery...
Christine: I think they're all waiting for Gabriel to get back from his time off. They must be hoping that he'll be the one to draw the slip with the X on it.
Posted by John Scoleri at 6:00 AM