Morgan and Julia listen by the door to the room Gabriel is locked in. She wonders if they'll see Gabriel alive again, and if they do, if he'll be insane. Julia goes to check on Melanie. Morgan goes down to the drawing room to be with Catherine. 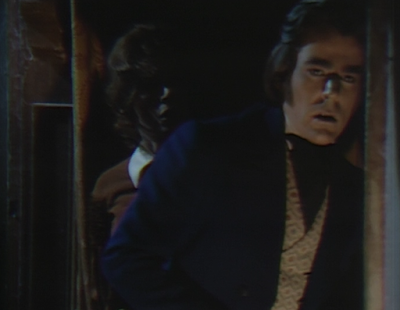 Catherine asks Morgan if anything has happened. He says they didn't hear anything inside the room. They profess their love for one another and kiss. Catherine says she feels sorry for Gabriel, and wonders if they'll ever know what he experienced. 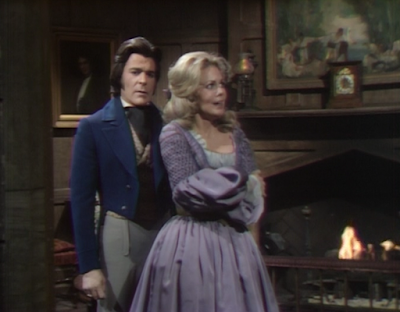 Julia tends to Melanie, who is delirious. She babbles about Brutus, and then screams, "No!" Julia tries to interrogate her about Brutus. Melanie sits up and tries to get out of bed. Julia asks her who she is. Melanie asks for James Forsythe. She says he killed him. 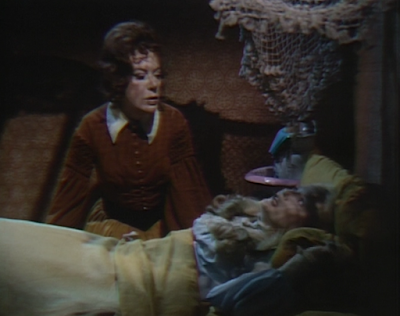 In the night, Catherine sneaks out of her room. She goes to the door behind which Gabriel is locked. She listens at the door, and then starts to open the door when she is startled by Julia, who asks what she's doing there. She says she told Catherine not to interfere, and sends her away. 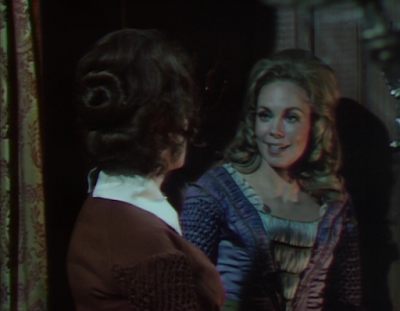 Bramwell is sneaking around the gazebo when he spots Catherine, and hides. He comes up behind her, and she is pleased to see him up and about. She tells him that he looks well, and asks how he feels. He doesn't respond. He asks her how it feels to be part of the Collins' madness. She reiterates that she's glad to see him, but suggests that he leave. She says Morgan wouldn't like his being there. He reminds her that she chose Morgan, so why would he mind. He bids her goodnight and starts to leave. She engages him in further conversation, and he asks her if she's happy. She says it's impossible with all that is happening in the house, but with Morgan, she is. He asks if she wishes he had never come, and she says yes. She expresses concern that Morgan might see them. He asks if Morgan would know she wants him to touch her. She says she doesn't want that. He asks if she's sorry that he lived. She admits that she wanted them both to live. She begs him not to speak of the duel again. She asks about Daphne. He says she just saw her, so she knows how she is. He adds that she was very kind to him; there when Catherine wasn't. She says that people will talk if Daphne is in the old house with him. He says she doesn't think that. She admits that she doesn't want him to hurt Daphne. He asks if she's jealous. 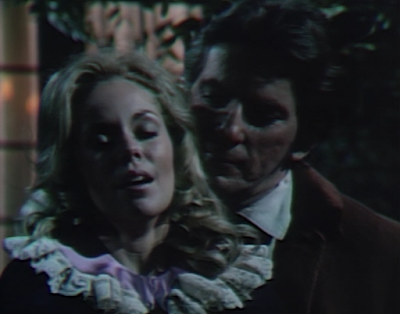 Morgan appears, and asks why she would be jealous. He sends her inside, and tells Bramwell to leave. Morgan asks him why he didn't fire at him in the duel, and Bramwell walks out on him.

Julia is watching over Melanie when Josette comes to see her. Julia says they'd like to cofine the plague to the house. Josette points out that if that were concern, they wouldn't have Daphne in the new house, or have visited the old house. Josette asks how it happened; noting that plague is unheard of in modern times. 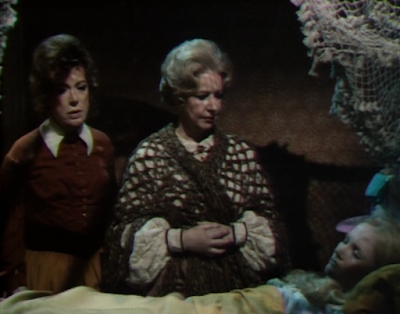 Melanie sits up and is pleased to see Josette. She sees Julia and asks her what she's doing there. Julia asks if she's alright, and Melanie asks if she had another one of her attacks. Julia says she was ill, but she doesn't understand. Melanie asks if the lottery has been held. Julia explains that Gabriel is in the room as they speak. Melanie hopes that he breaks the spell. Julia leaves Melanie with Josette to go check on Quentin. Josette tells Melanie that she's very fond of her. It makes Melanie very happy, because she always doubted that anyone in the family loved her.

Julia comes downstairs and tells Morgan that Melanie and Quentin have both recovered. She says it's as if the curse has been removed, or the thing in the room has been appeased. She wonders what's happening to Gabriel in the room. Julia prays that the curse is over.

At dawn, Morgan goes to the room and unlocks the door. He goes inside and finds someone lying on the bed, apparently dead, but it's not Gabriel. 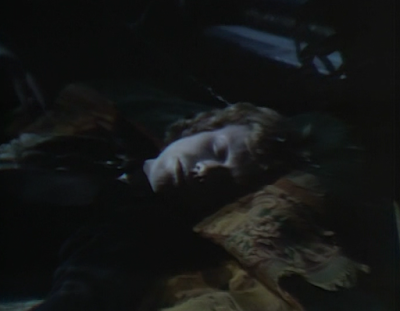 John: Well, so much for getting to see anything on the far side of the door to the locked room. I was hoping we might get some details on Brutus from possessed Melanie, but that didn't amount to much, either.
Christine: Josette's interaction with Melanie leads me to believe that Josette is her birth mother. If so, the question is why she doesn't know that, and if it may be because Barnabas is not her father.
John: I did find it quite funny when Catherine told Julia that she had a right to be outside the door to the locked room, and Julia's response was that it was not a matter of right or wrong. To be fair, Julia was right, because Catherine's claim to have a right to be there had nothing to do with it being right or wrong...
Christine: Bramwell really knows how to get to Catherine. He may take up with Daphne for the sole purpose of making Catherine jealous.
John: So who was that lying dead in the bed if not Gabriel? Frankly, had he not said that, I couldn't tell that the body didn't belong to Gabriel...
Christine: It kind of looks like an Invasion of the Body Snatchers pod version of Gabriel still taking form. Also, if that's not Gabriel, then what happened to Gabriel? At least the plague was abruptly ended. If only that would work on Covid.
Posted by John Scoleri at 6:00 AM