Quentin assures Amanda that Tate is wrong, and that she is human. He says he will meet her at the train station in a little over an hour as they've scheduled. 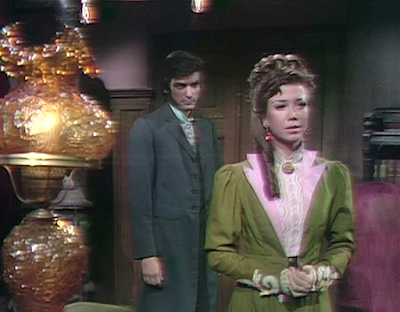 Trask searches Collinwood for Amanda. Quentin returns and accuses Quentin of having done something with her. He suggests that she may have gone away with Tate. Trask demands to know where she is. He tells her that when he finds her, he'll tell him. Trask threatens to make his life miserable, and Quentin tells him that his mere existence makes his life miserable. 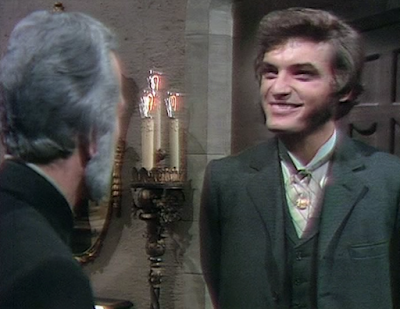 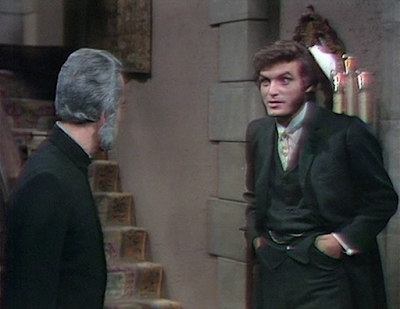 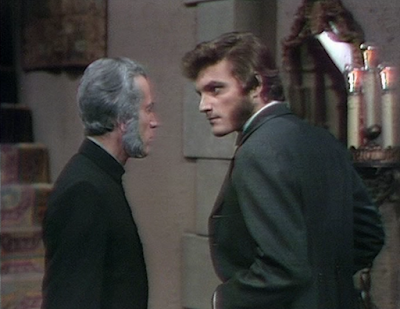 Tate considers burning Quentin's portrait, which would make his werewolf curse return with the next full moon. He wonders what Quentin will do when he discovers the portrait is gone. 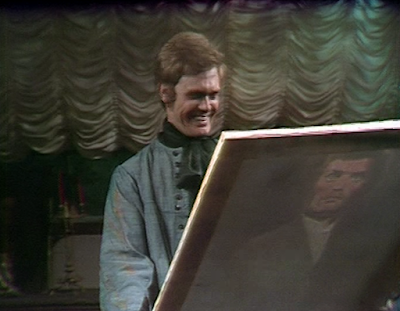 Quentin packs for his trip when Nora comes in. She asks him why Jamison is mad at him. She notices he's packing and asks if he's going away. He says that he is. He asks her to promise not to tell anyone that he's leaving. She promises him. She says she'll miss him, and he says he'll miss her, too. 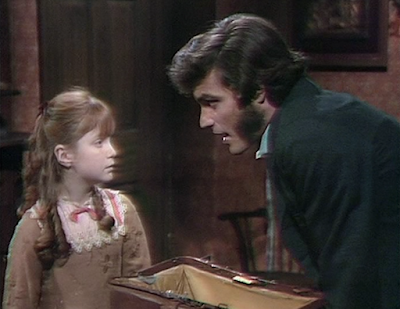 He asks her another favor. He asks her to tell Jamison that he loves him, too. She says Jamison is mad that Quentin is going to marry Angelique. She asks if he's going to take the painting, and he says it is, but finds it's missing when he removes the cover. He writes a note to Amanda saying he may not be able to leave on the six o'clock train. He asks Nora to deliver the letter to Amanda at the rectory. She agrees, and takes the letter. He wonders if Petofi or Tate took the portrait. 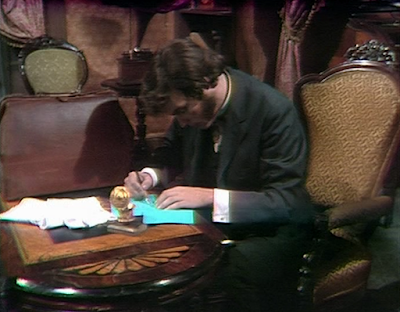 Nora starts to sneak out, but is caught by Trask. He asks where she's going. She says she's going to find Jamison. Trask presses her, and accuses her of lying. She runs out the front door.

Quentin arrives at Tate's and demands the portrait he stole. Tate denies it. Quentin says he checked with Petofi, and he didn't have it so Tate must. He accuses Tate of taking it in an attempt to control Amanda. Quentin starts searching for it and Tate throws him. They grapple, and Quentin breaks a bottle over Tate's head. He resumes looking for the portrait. 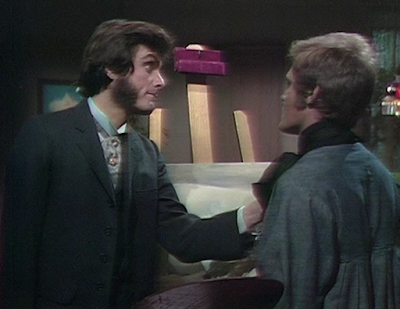 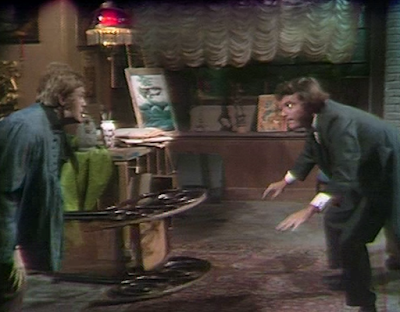 Nora makes her way to the rectory when Trask stops her. He tells her that he found Jamison in his room. He asks her who lives in the house she was going to. He asks her what she has in her hand, and demands that she give it to him. He calls her an evil child, and takes it from her. He says she will stay right there, and opens the letter to read it. 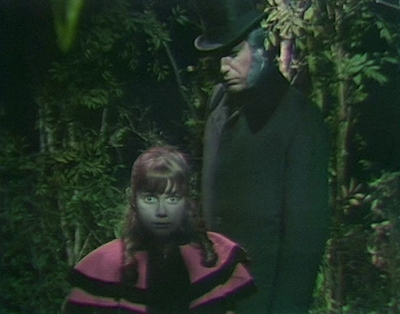 Amanda is packing when there's a knock at the door. It's Trask. She tells him he needn't bother coming in, but he does. He says he cannot let her life here end like this. She tells him that she has not been honest with him. He says he knows she's running away with Quentin. She doesn't deny it. He says that she came to him despondent under the effects of a man, and she tells him she was lying. She was setting him up to fall in love with her. She says she realized that he deserved it. He tells her he wants to save her. He asks her if Quentin is going to bring Angelique with him. He says when he left, they were laughing and making plans to have dinner at the Inn tonight. He tells her Quentin is incapable of morality. She tells him to get out. He says he's her only friend. She tells him she never wants to see him again. 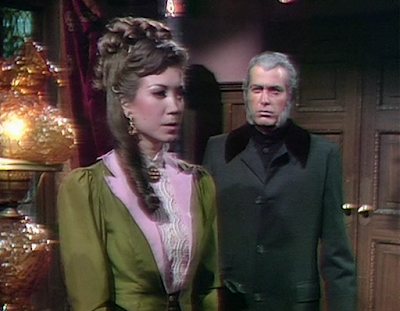 Quentin searches everywhere for the portrait, except on the easel where Tate hid it.

Quentin arrives at the rectory, but Amanda is not there. Nora is, and she tells him that Trask took his note from her. He realizes that he has to get to the train station.

Amanda is alone at the train station. The conductor tells her that the six o'clock train is about to leave. 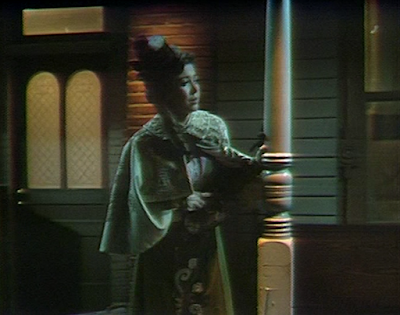 John: Do you think Tate painted over the scar in the portrait? Or the more likely excuse that the prop department just gave him the wrong one?

Christine: I'm not sure what to make of the case of the missing scar. I could be wrong, but the seascape that Tate is working on when Quentin arrives appears to be eerily similar to one that Sam had displayed on the easel behind him in Episode 164, and the portrait lying on the ground when Quentin leaves looks very much like the one that was identified in Episode 22 as Sam's portrait of Maggie's Mom.

Christine: I don't think he'd forgive him any more for marrying Amanda instead when the reason he's mad is because Quentin dumped Beth. Can anyone identify the incidental actor playing the train conductor? He sounds awfully familiar. 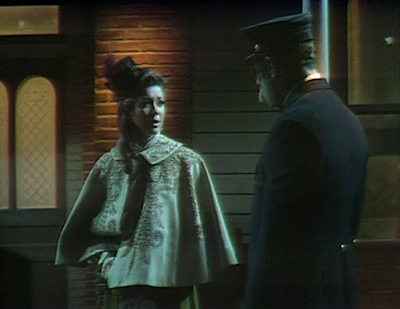 John: Wow! That sure looked like a real fight between Tate and Quentin—barely choreographed. The cameramen had a heck of a time tracking them. I don't know if Davis and Selby truly had bad blood between them, but it's almost more exciting to think that they did!

Christine: Roger Davis brawls are always a sight to behold for their realism! I can't say if the man has any deep seated aggression that he's drawing from in his acting, but he sure makes it look as though he does. 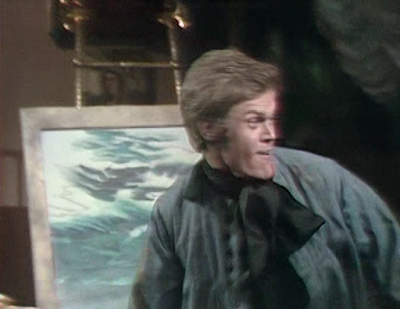 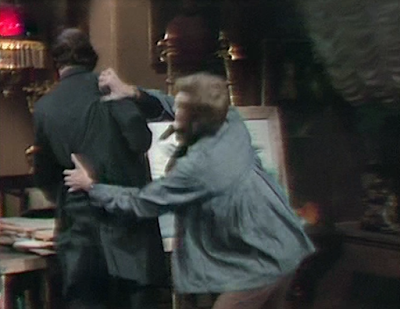 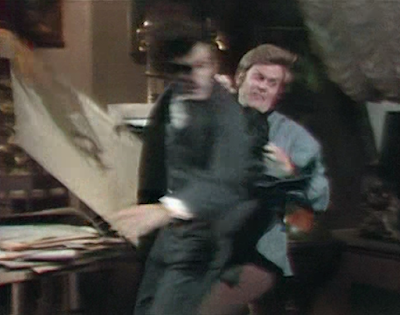 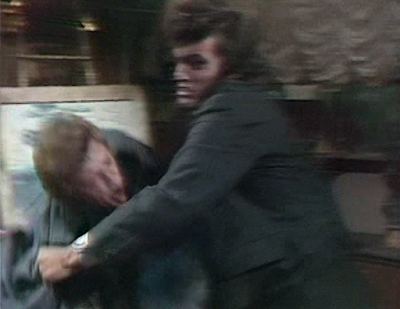 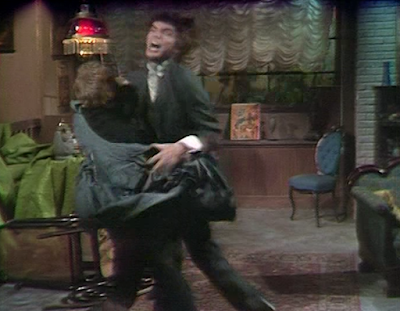 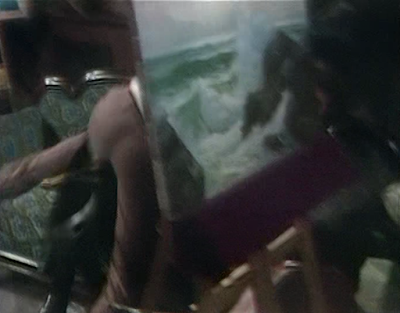 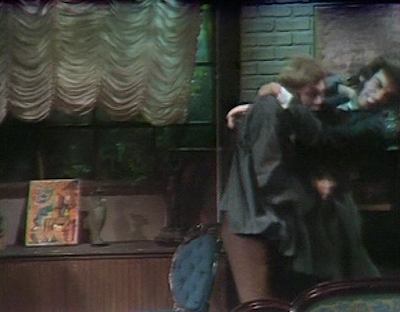 Down for the Count:
Barnabas was staked in his coffin 5 episodes ago.
Posted by John Scoleri at 6:00 AM