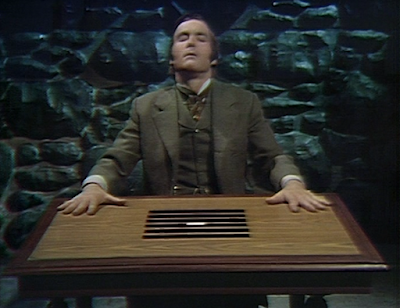 In an I Ching trance, Tim sees a door. It opens for him and he steps through. He sees a hooded figure approach Amanda and reach out to strangle her. She pulls back his hood revealing a mask. He approaches her again and she removes his mask, revealing Quentin. He laughs, and grabs her throat. 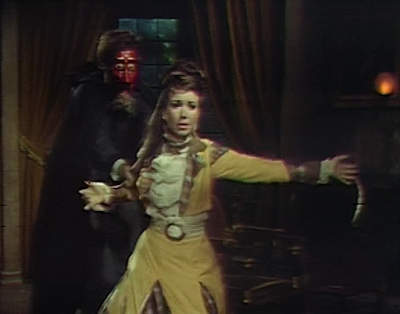 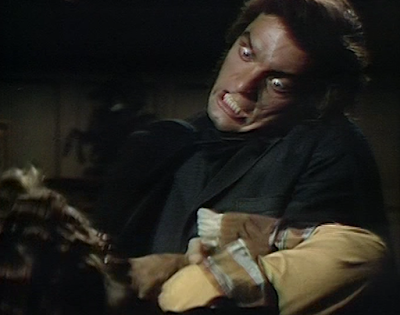 Tim comes out of his trance screaming that, "he can't kill her." 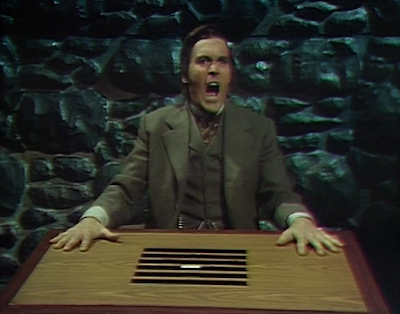 Tim arrives at Collinwood and tells Amanda she's in danger, and he needs to get her back to the Inn. He tells her that Quentin is planning to kill her. She asks if he knows Quentin, and Tim says he knows him well enough to know what he plans to do with her. She says Quentin is a warm, sensitive, gentle man. Tim asks her how well she's gotten to know him, and she says it's none of his business. He tells her she means a great deal to him. She says he's just using her. She tells him he should leave. Tim asks if she's in love with Quentin, and she says that she is. He asks if Quentin knows that she only appeared on Earth two years ago. Tim says she can disappear as quickly as she appeared. He tells her that he watched the man Tim created die when Tate shot him and he disintegrated into thin air. He says the man had no mortality, and neither does she. She runs out, and Tim chases her. 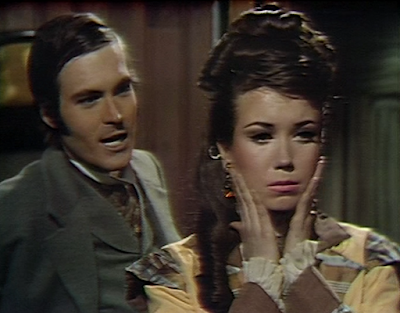 Quentin is in the drawing room when he hears Tim chasing Amanda. Quentin confronts Tim, who tells them that they deserve one another before leaving. Amanda tells Quentin that Tim is possessive. Quentin asks her again to go away with him when there's a knock at the door. It's Tate to see Amanda. 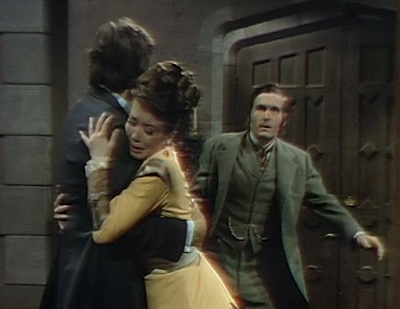 Quentin says he's tired of Tate bothering her. Amanda tells Tate that she's too upset to speak to him, and goes upstairs. Tate tells Quentin that he's made a mistake protecting Amanda. He says she belongs to him because he created her. Quentin asks how he did that. Tate says it's a gift he doesn't understand. He can create things he paints or draws. Quentin tells him he's mad. Tate says that he'll believe him. Quentin suggests that imagining himself to be God may be going a bit too far. Tate reminds him that his curse has been transferred to the portrait Tate painted. Quentin says Petofi was responsible for that, not Tate. Tate says the ability is in his hands, and puts his hand right in Quentin's face. Quentin asks if he told Amanda this, and he says she knows everything. Quentin threatens Tate if he returns to Collinwood. 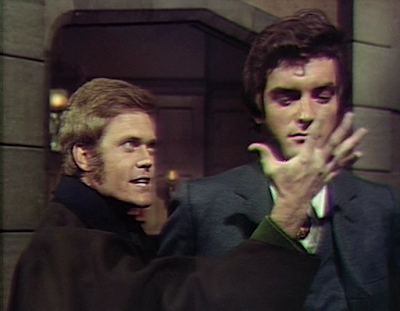 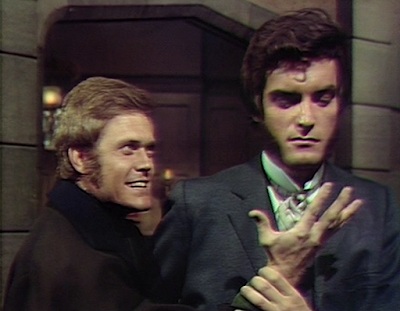 In her room, Amanda wonders where she came from, and if she'll disappear like the man. Tate comes into her room and asks how she feels about Quentin. She says that he cannot control her feelings. She says she loves Quentin. He says she can't. He says it's impossible, and that he told Quentin about how she came into being. He tells her he loves her. She begs him to destroy him to take her out of her misery. He tells her he just wanted to paint his ideal woman, and she was his creation. He says fate brought them together. She rebuffs him. He says she'll realize someday that she doesn't have any choice. She says that no matter what happens, she'll love Quentin until the day she dies. Tate says Quentin is evil. He says Quentin will walk out on her, and leave. Amanda takes her suitcase from under her bed and begins packing. 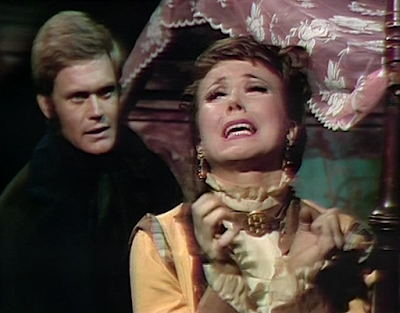 Quentin comes in and asks if he saw Tate leaving. She says it was. He asks what she's doing, and she tells him she's leaving Collinwood alone. She says she know Tate told him about her. He says he doesn't believe Tate, and even if what he said was true, it wouldn't change his feelings about her. He asks her again to go away with him, and she agrees. He says he'll take care of the arrangements, but suggests she leave Collinwood for now so that she's safe from Trask and Angelique. He sends her to the rectory, and tells her he'll meet her at the train station tomorrow, before kissing her goodbye. 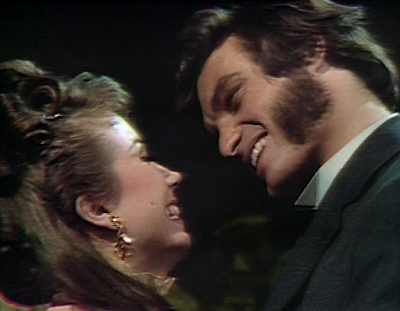 Tate sneaks into Quentin's room. He finds his portrait, and says that Amanda is his. He takes the portrait from its frame and sneaks back out. 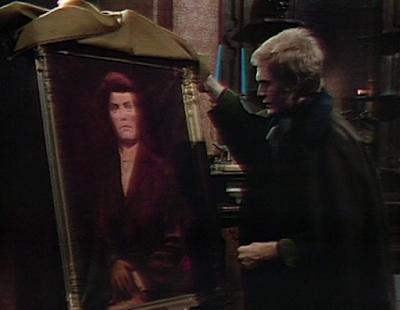 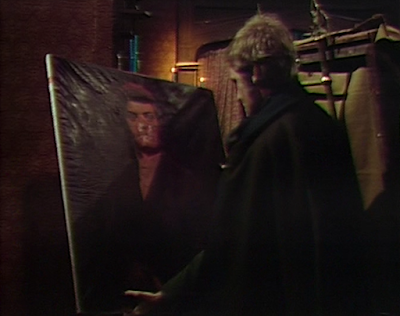 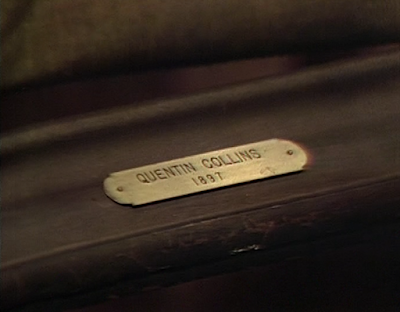 John: Remember the good old days, when the I Ching was used to travel through time, rather than provide a window to the future? 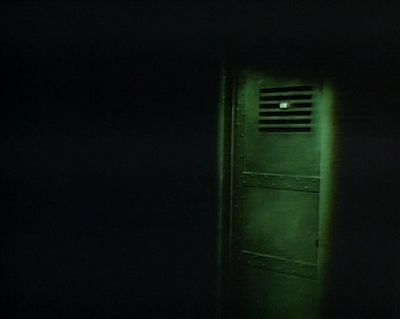 Christine: It could be that many fans were disappointed to learn that the I Ching couldn't actually help them travel through time, so they tried to relate it more closely to the divination tool it was intended to be. I'll keep trying though.

John: Tate is such a loser that Amanda would rather be destroyed than be with him. And I can't say I blame her. 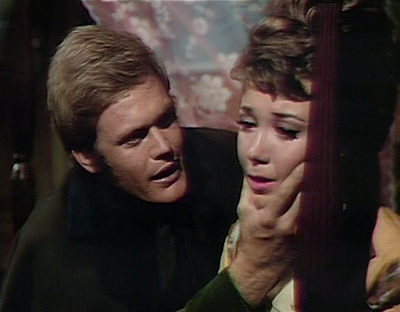 Christine: Why doesn't he just sketch another ideal woman? Though, it's doubtful that any of his creations would enjoy his manhandling.

John: Sure, Amanda's a babe. But what is it about her that has Quentin so instantly smitten? I don't doubt that he'd court her, but it doesn't seem to fit his m.o. for him to want to settle down with any one woman forever...

Christine: I think it may fit his pattern of behavior, after all, since there's plenty of evidence that marriage is not something that ties him down to one woman. He married Jenny, but carried on with Beth. He planned to marry Beth, and then pledged himself to Angelique, before going after Amanda. The only thing that's certain about Quentin is that his head will turn towards whatever new pretty face shows up at Collinwood. I wouldn't be surprised if he left Amanda waiting at the train station while he proposes to Kitty next.


Down for the Count:
Barnabas was staked in his coffin 3 episodes ago. 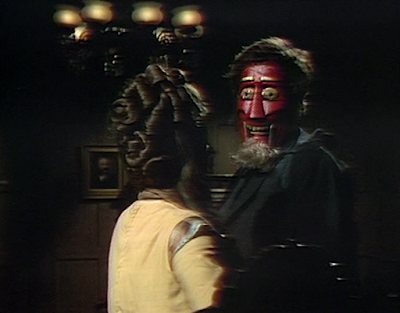