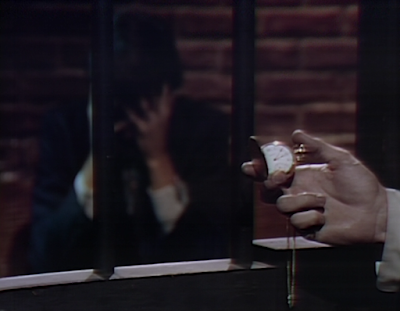 Trask tells Quentin that his plan failed to stand up to the one with the almighty on his side. He says the moon will rise in one minute, and he will soon be able to tell the whole world Quentin's secret. Suddenly, Quentin struggles in pain, though he says it's different than before, and then says it's gone. Trask doesn't believe it. He assumes his watch is wrong and leaves. 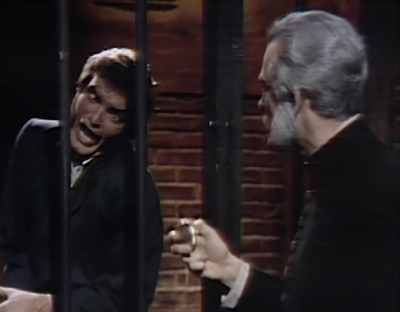 Trask returns to the cell. Quentin asks him to confirm the moon has risen. Trask says he doesn't understand it. Quentin is thrilled. He tells Trask to let him out of the cell. Trask refuses, saying he can't let him out, as he's the werewolf. He says he admitted it. Quentin asks him if he's gotten into the brandy. Trask says he'll keep him locked up until morning. Quentin lays out the charges he'll accuse Trask of, and Trask agrees to let him go. Quentin laughs as he walks away from the cell. 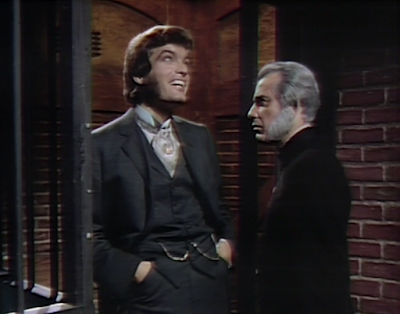 Amanda tells Tim that she wants to leave Collinsport. 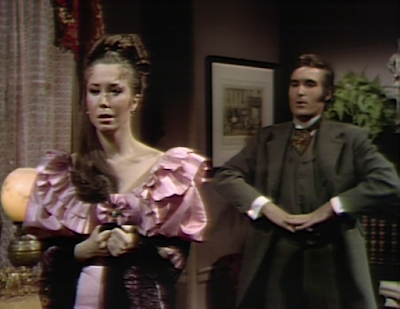 Trask buries his confession in the woods, confident that it won't appear again. 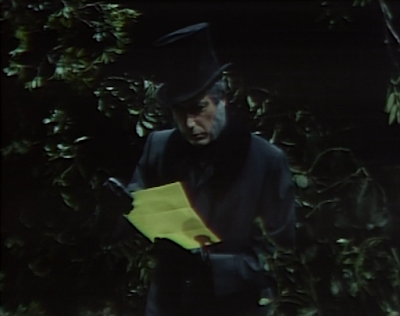 Quentin returns to Collinwood, and runs into Count Petofi. Quentin says he doesn't seem surprised to see him on a night with the full moon. Quentin grabs Petofi by the throat, and asks him what he has to do with what's going on. He asks him if he helped him. Petofi asks what he's talking about. They retire to the drawing room for a drink and discussion. 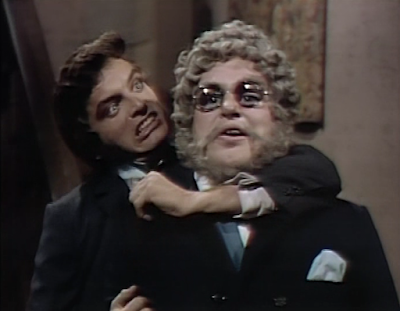 Quentin asks him why things didn't go as he expected, and Petofi says that perhaps at the proper time, he will. Quentin says if Petofi was responsible, he'd be taking credit for it. Petofi laughs at him. He explains that his plan is cosmic, and the full implications of it will not be clear to Quentin for a long time. Quentin asks if it involves him, and Petofi says that it does. He says in time he will present his bill for ridding him of the curse. Quentin asks what he'll do if he doesn't pay it. Petofi assures him that he'll like what he has in mind for him, far more than baying at the moon. 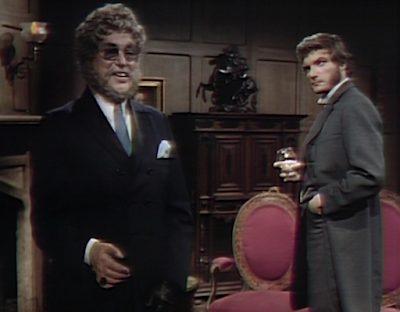 Amanda asks how she could get Trask to agree to her living in Collinwood. Tim lays out a plan for her to use on Trask. She tells Tim she wants to go away, and he says they will, once they've done what he's set out to do. He asks if she's going to do everything he wants her to. She says no, and when he dangles diamonds in front of her, she says, "We'll see." 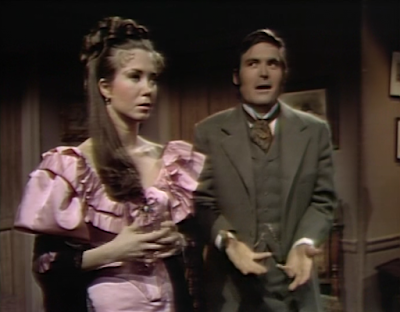 Amanda tells Trask that she's afraid she won't be able to keep herself away from the man she told him about. Trask massages her arm, and tells her that nothing will harm her now that she has come home. He offers to get her things from the Inn. He tells her not to worry about what people will say. He tells her that he understands her, and can help her. She says she'll call to have her luggage delivered. He tells her he'll have a room prepared for her, so she's comfortable in her new home. 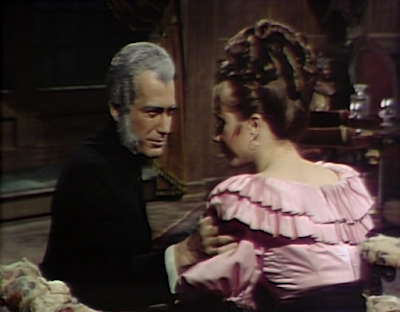 He leaves and she calls Tim at the Inn. She tells him there has to be another way, as she can't stand looking at him. She hears someone coming and assumes it's Trask. It's Quentin. She remembers him, and he's honored that she remembered his of all the names she must know. He tells her that she's beautiful, and she says he's very handsome. She says that neither of them is very happy. He asks what she wished for when she was a little girl. He tells her he'd like to get to know her better. He finishes sweet-talking her and excuses himself. 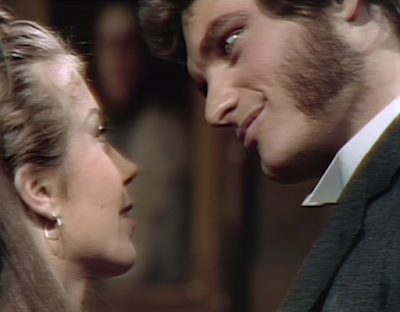 She calls Tim back, and he tells her that she has to go through with their plan. She asks him to listen to her, and tells her to bring her luggage to Collinwood. Tim is surprised by her change of heart. She hangs up, and Trask asks who she was talking to. She tells him the manager of the Inn is sending her luggage over. 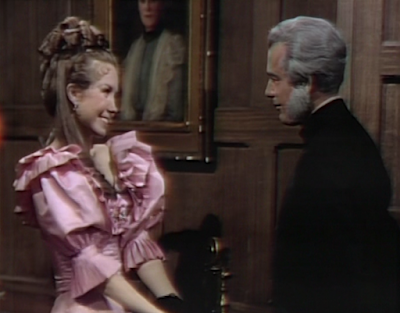 Quentin goes to his room and sees a portrait on the chair, covered. He uncovers it and recoils in terror, as it has his name, but the portrait is of him as a werewolf. 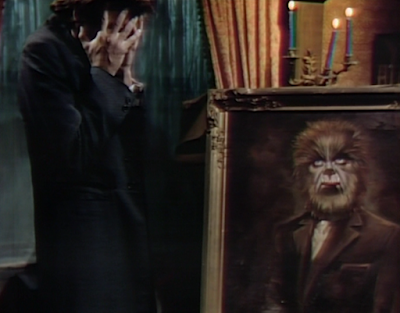 John: I love the precise timing everyone likes to quote. The moon will rise in exactly one-minute. Of course, when Quentin doesn't change, he blames his watch... because it tracks moon-rises?

Christine: It is especially interesting in light of the fact that days and weeks are very malleable on the show.

John: Sometimes it's no fun when you anticipate something coming in advance, but I was quite pleased that my prediction about Quentin's portrait proved true! Such a nice new portrait... what gallery will this one go in?

Christine: The Quentin portrait and any of its transformations or modifications will be housed in the Works of Charles Delaware Tate Gallery. It was nice to also see the Mustache Man make an appearance in today's episode. 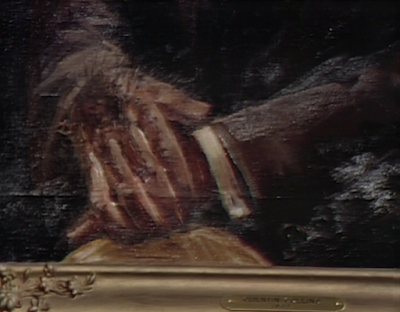 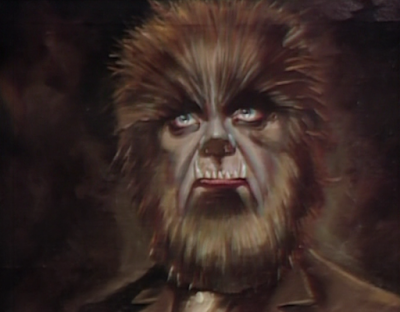 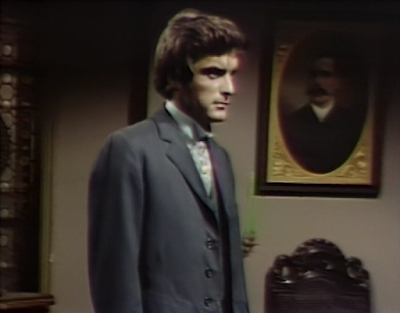 John: I don't get why Tim treats Amanda with such disrespect, nor do I understand why she doesn't just slap him and walk out. And then she has to deal with Me Two moments in Collinwood—Trask AND Quentin. Though by the sound of it, while she's not looking forward to spending time with Trask, it does seem like she'll be cozying up to Quentin in no time at all. And he was certainly throwing himself at Amanda like there was no Beth in his life. He's lucky it was her day off today, but I think there's going to be a catfight in Collinwood before too long. And now more than ever, the thought of Quentin's death on September 10th is sounding all the more possible...

Christine: I think it's par for the course with Quentin. He was once throwing himself at Beth like there was no Jenny Collins in his life. It makes his curse seem especially appropriate.