Barnabas and Will arrive at Stokes' home. Will assures Barnabas that Stokes is at the Eagle, and will be there until closing. Will tells him there's someone else in the room with them. He hears Hoffman's voice, saying she won't let them enter. Will thinks it's her ghost speaking to them. Barnabas thinks she's in the room with them, and Barnabas says it's just her spirit. He offers to help her. He says she cannot rest because her mistress is not at rest. He tells her that she can rest with Angelique if they just let them into the room. They hear her whimpering cries, which fade away. Barnabas asks Will if he still feels the presence, and he says no. Barnabas tells Will to follow him. They go into the room with the woman's body. 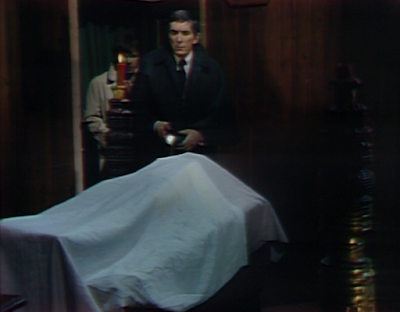 Angelexis is sitting by the fire when Amy comes downstairs. She asks where Maggie is, and then says she wants to see Quentin. Angelexis says they're not there. Amy says she saw someone that looked like Quentin creeping into a back window. Angelexis asks why he would do that. Amy says she heard a man by her door. Angelexis says that Quentin isn't there, and neither is Barnabas. 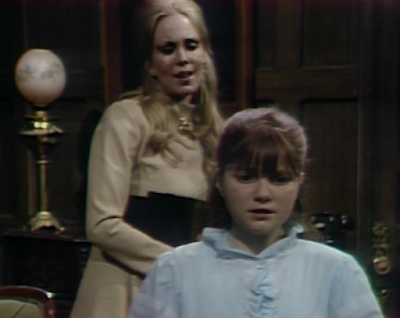 Angelexis starts to feel faint. Amy asks her what's wrong. She says nothing is wrong.

Will asks if he's sure this woman is alive. Barnabas asks him to check Stokes' books for any records on her. 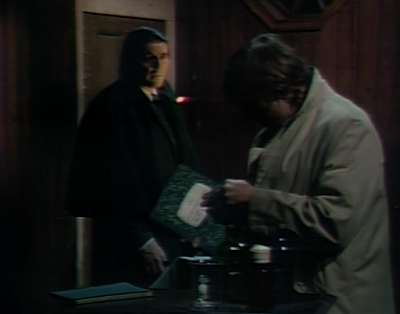 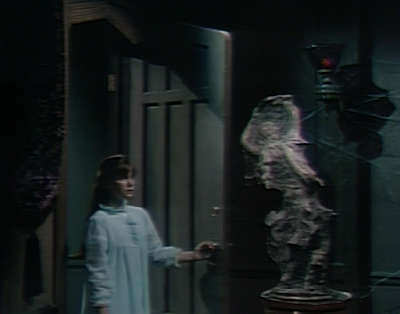 Angelique arrives at her father's home. He's not there, but she is shocked to find the woman's body is gone. 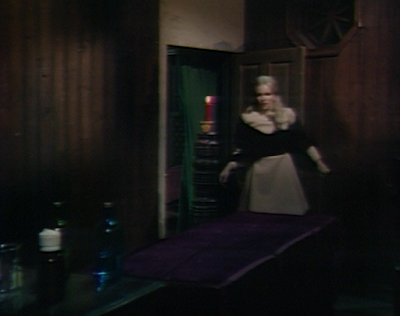 Julia tells Barnabas that he should have listened to her. She asks to speak to Barnabas alone, and Will leaves them. Barnabas says he knows she's against it, but it's done now. She tells him it's just beginning. There's a knock at the door. Julia asks who he thinks it is. 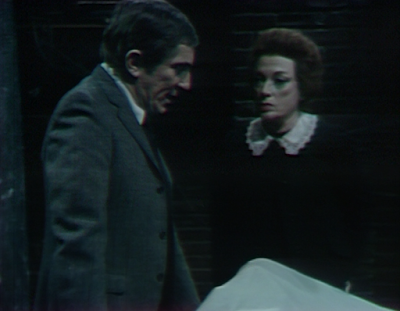 Will opens the door to find Angelexis. She asks to see Barnabas. Will says that she doesn't know Barnabas and that one never knows when he's going to be there. Will tells her he thinks he has a girl somewhere, and Angelexis says that's a girl she'd like to meet. He says Barnabas is very secretive.

Julia and Barnabas listen from the basement as Will tries to get rid of Angelexis. She says she assumed he was always at the old house, since they never see him during the day. She asks Will why he's so nervous. She then asks him if it's the day he normally meets her father at the Eagle. He tells her he's trying to turn over a new leaf, and begin writing again. She pulls a book off the shelf near the secret panel. Will momentarily freaks out and tells her that everyone left him alone so that he could work on his new project. She asks him not to tell Barnabas she was there, saying she wants to surprise him. 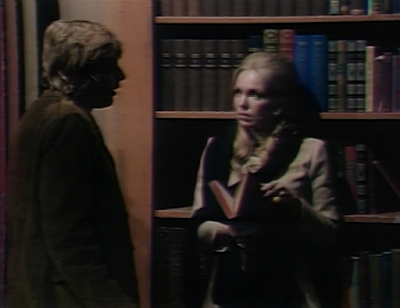 Barnabas tells Julia that she would be right to say she told him so. Julia says she might as well start work. Barnabas is surprised that she changed her mind. He thanks her. 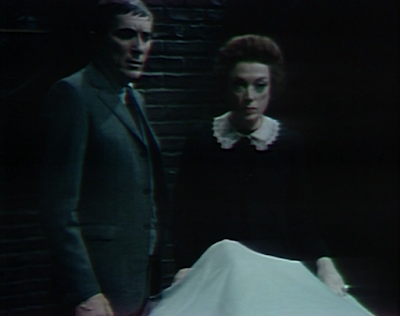 Amy is searching in the locked room. She thinks Daniel won't believe she was exploring on her own. She hears footsteps, and hides. 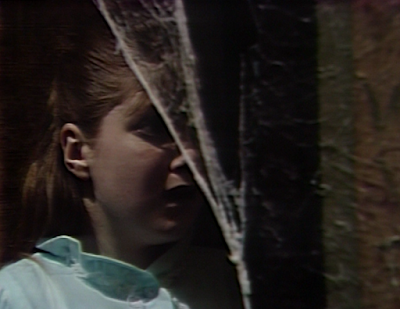 Angelique tells Julia she's never around when she needs her. Julia says the body has moved before, and Angelique tells her that she's always felt it before. She asks her to go to her father at the Eagle and bring him back to the cabin. She says she needs to figure out how Barnabas found the body. When Julia says she doesn't think he does, Angelique says she naive, and more trusting than she's ever been before. 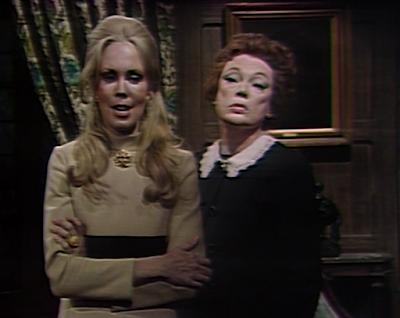 Amy continues exploring, opening a door to another room and stepping inside. She finds the Bruno voodoo doll. 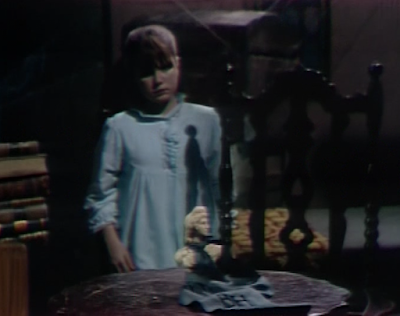 Barnabas tells Will that they just need to show Quentin the body in the room to prove that Alexis is Angelique. He adds that they need to find him tonight, and sends Will to go look for him. 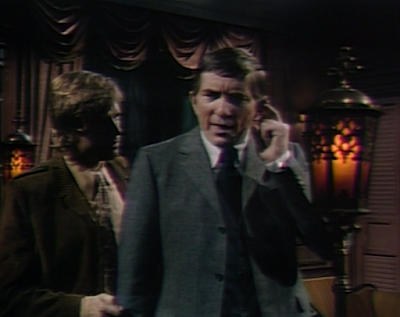 Julia tells Angelique that her father was incoherent. Angelique says she must have the girl, or everything could end just like that. She asks what Barnabas' choices are. Julia suggests that someone else might have taken her. Angelique says that he is her enemy, but she can't understand why he hasn't destroyed her already. 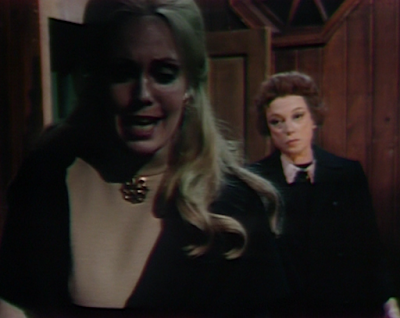 Will asks Amy where she got the voodoo doll. She says she got it in the tower room in the west wing. He tells her to go to bed, and she says there's someone upstairs. He offers to take her up to her room. 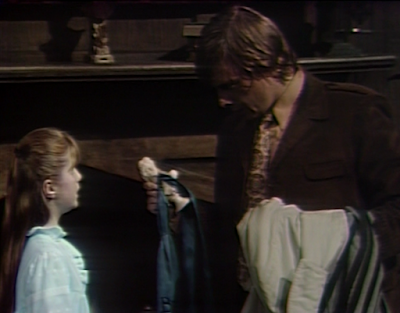 Barnabas tells Julia she shouldn't have come to see him. Julia says Angelique is certain he has the girl, and she will stop at nothing to destroy him. He says they must both be careful. 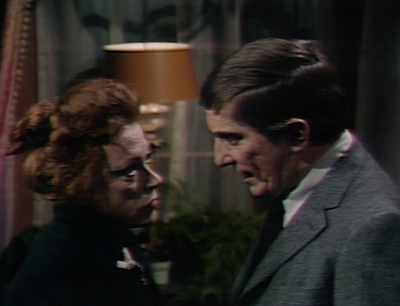 As he looks for Quentin in Collinwood, Will says he must be careful, because Maggie says he's gone mad. He thinks Quentin will know he wants to help him. He then wonders if Angelique has somehow changed Quentin. He searches the tower room in the West Wing, and finds a tie. He hears footsteps, and the door begins to open. 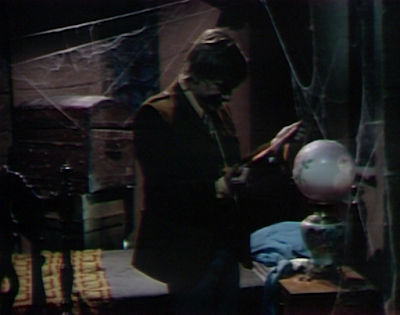 John: Had to laugh when Will suggested Barnabas had a girl somewhere, and Angelique said that's a girl she'd like to meet. Even though it directly applies to today's events, I find it amusing to consider the surface stories they're concocting, first that Barnabas might have a girlfriend stashed away somewhere, and that if he did, Angelique would be interested in meeting her for any other reason than to destroy her.

Christine: Or perhaps she understood that Barnabas' new girlfriend is the one providing her with life force. Here's Barnabas thanking Julia once again for setting him up with a younger woman. 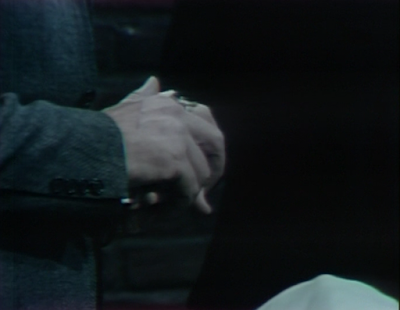 John: It was amusing to hear that Papa Stokes was too drunk to show up today. I'm guessing Julia didn't tell him the body was missing, as I assume that sort of news might be sufficient to sober him up.

Christine: It sounded like he may have been too wasted to hear it even if she did tell him.

John: So what the heck are Barnabas and Julia waiting for? Just starting to revive the woman would be enough to knock out Angelique. Methinks the writers didn't think too hard about what it would mean for them to steal the woman's body.

Christine: Oh, I'm sure they'll find a way of making it so that they can revive the woman and Angelique can still have some sense of self. Remember Adam? Or do you prefer to forget?
Posted by John Scoleri at 6:00 AM