Maggie steps inside Angelique's room, where the piano plays with no one at it. She hears Angelique's voice calling her name. She starts to run, and Angelique says she can't run away from her. Maggie stops and says she'll fight her. Angelique tells her that she has already won. She says no one wants Maggie around, especially Quentin. Maggie looks at Angelique's portrait, which dissolves into Alexis face, telling her how Quentin doesn't love her. She tells Maggie to go to the window and jump. Maggie stands on the window ledge, as Angelique's voice tells her to let go, and fall. Angelique tells her that Quentin will never stop loving her, and that only death will stop her voice. 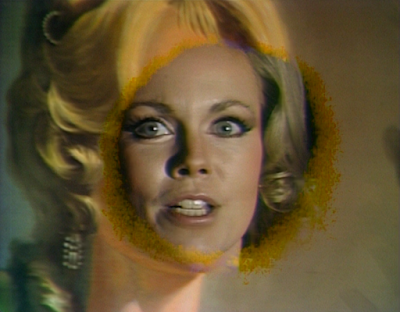 Julia stands outside Angelique's door when Elizabeth walks by saying she heard someone screaming. Elizabeth brushes past Julia and goes in. She grabs Maggie, who says she wants to die. Elizabeth asks her if she wants to destroy Quentin, too, and that calms her down. They come in, and Maggie says that everything Angelique said was true. 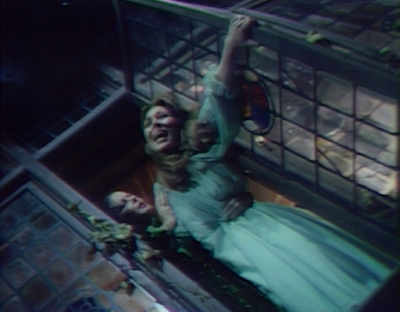 Angelique continues to call to Maggie, telling her to look at the portrait. Julia interrupts her and says she almost did it, but Elizabeth stopped her. Julia reminds her that Quentin must get rid of Maggie of her own free will. Angelique says that Julia's right, that she has won, and that's what's important. 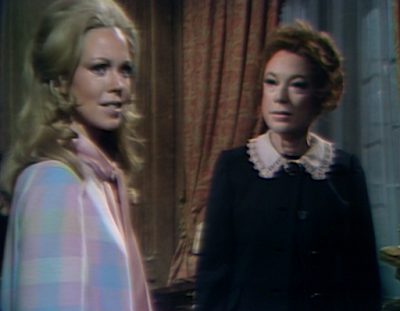 Elizabeth escorts Maggie downstairs into the drawing room. There's a knock on the door, and she goes to answer it. It's Barnabas. She asks what made him return so late, and she invites him into the drawing room. He asks if Quentin returned, and Maggie says that he'll never come back as long as she's there. Elizabeth says she'll never forgive Quentin for leaving like he did. They give Maggie a drink. Elizabeth asks him to stay with Maggie while she fixes a place for her to stay with her in her room tonight. 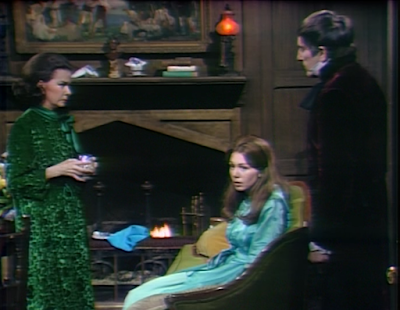 Elizabeth goes upstairs, and Maggie says Angelique promised that she'd return, and she kept her promise. Barnabas asks her about it, and she dismisses him, saying he won't believe her. Maggie says she heard Angelique's voice coming from her portrait, saying that she was the one Quentin wants. He tells her Angelique is dead, and Maggie tells him the house is filled with her presence. Barnabas says that in a way she may be right. 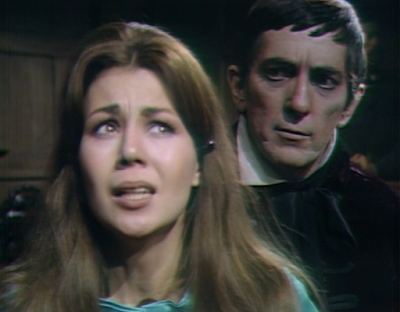 In Elizabeth's room she brushes Maggie's hair. She says that Quentin saw all the differences between she and Angelique when he saw her in the dress. 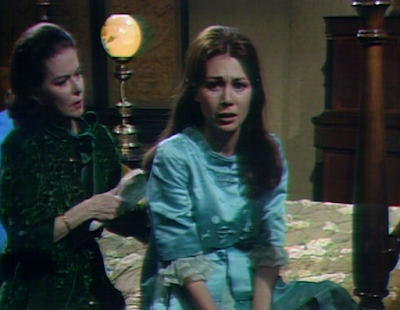 Julia finds Barnabas in the drawing room, and he asks her if she was close to Angelique. She says she was very devoted to her. He asks her about the book of witchcraft that was Angelique's. He says he heard Angelique promised to return after her death. Julia says it was a figurative statement. Angelexis comes in and asks what they're talking about. Julia tells her what Barnabas was asking about. Angelexis says he surely can't believe her talk of returning from the dead had anything to do with witchcraft. She sends Julia upstairs to fix her bedside lamp. 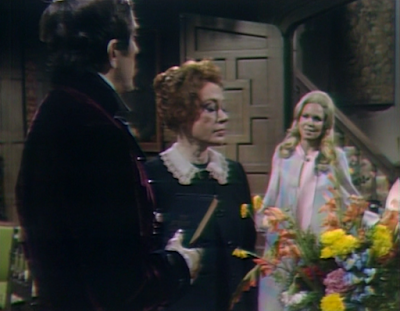 Angelexis says that she finds the occult boring, and the pursuit of it a waste of time. She laughs at his belief about Angelique. He tells her there are portions of the book that might interest her, such as the use of fire in sorcery and witchcraft. He says she appeared to have more than an aesthetic interest in the fire. She tells him that her sister had a marvelous appreciation for the preposterous. Barnabas bids Angelexis good night, and leaves to say goodnight to Maggie. 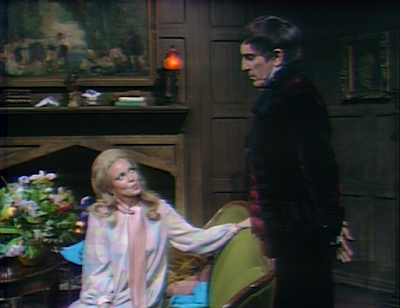 Julia asks Angelique if she thinks Barnabas knows. She says he suspects, but does not know. Julia asks what they'll do if Barnabas is able to prove it. Angelique assures her that she has the means for dealing with Barnabas, as he is only human. 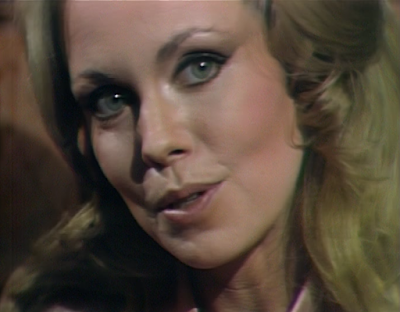 Barnabas says goodnight to Maggie. She asks if Quentin is home yet, and he says he hasn't seen him, but they'll find a way to deal with their difficulties. He bids the two ladies goodnight and leaves. Elizabeth tells Maggie what a fine man Barnabas is. 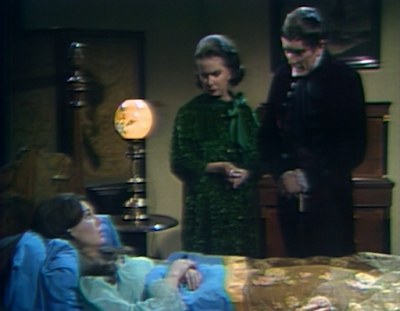 Barnabas closes a window in Angelique's room, and stands before her portrait. He demands to know the truth. 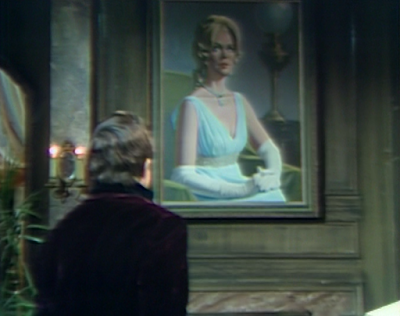 Angelique dismisses Julia for the night, and then says she can feel someone staring into her eyes. She doesn't realize that it's Barnabas. Angelique tells Julia that her eyes are burning. Barnabas says he must know the truth of Angelique, and calls her to come closer. Angelique bursts in screaming about her eyes, telling him to stop looking at him. He says he's looking into Angelique's eyes. She says that he knows, and he confirms that he does. 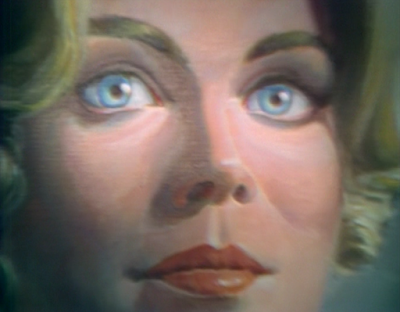 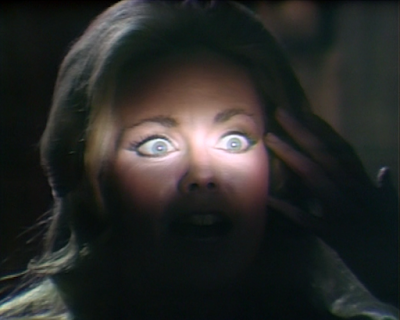 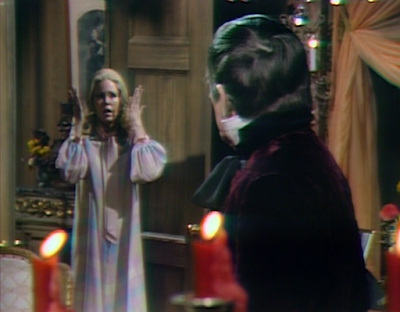 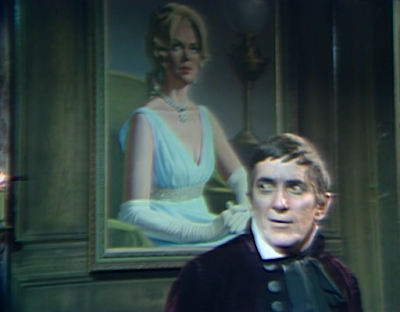 John: Maybe I was wrong about all the parallel time folks. Elizabeth certainly seemed compassionate towards Maggie. Though it was almost kind of creepy when she started to brush Maggie's hair.

Christine: I think the hair brushing was a means of comforting her. Elizabeth was certainly treating her much more warmly than she has in the past. I assume her empathy comes from also being on the receiving end of Quentin's cruel behavior.

John: Julia isn't going out of her way to hide where her allegiance lies. I'm surprised that Elizabeth didn't scold her for just standing by the door while Maggie was inside, screaming, and preparing to leap to her death!

Christine: I think Elizabeth was too busy rescuing Maggie to address it. I hope she might question her inaction in tomorrow's episode.

John: So the jig is up for Angelique. Barnabas knows who she is. But best of all, she appears to have no idea who—or what—he is! Should make for an interesting showdown tomorrow.

Christine: Indeed! Barnabas has the upper hand for once. Can't wait for the battle to begin so early in the week!