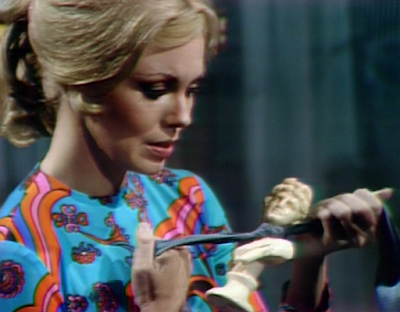 Bruno lies on the ground. Quentin applauds. When he doesn't get up, he kneels down and shakes him. Hamilton comes in and says that he hopes for Quentin's sake that Bruno isn't dead. Hamilton checks for a pulse and tells Quentin that Bruno is dead. He asks how it happened. 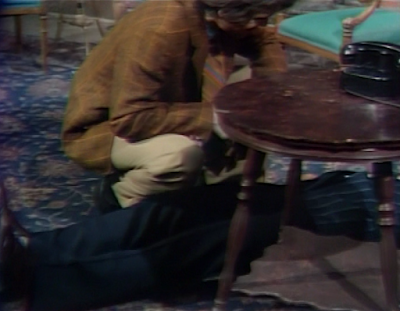 Quentin says he doesn't understand. Hamilton asks if he found him like this when he arrived. Quentin says he didn't kill him; he suddenly began to choke, and he thought it was an act. Hamilton says that Bruno is dead, and Quentin said he was angry enough to kill him with his own hands earlier. Hamilton arrests Quentin for suspicion of murder. He allows Quentin to call his attorney. 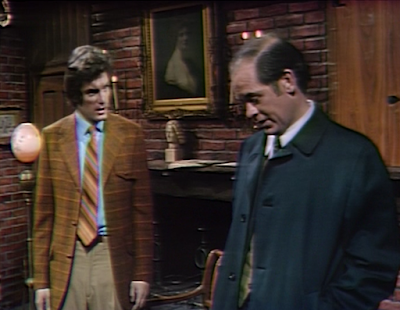 Angelique sneaks into Maggie's room and places the Bruno voodoo doll, with his handkerchief around its neck, in her drawer. 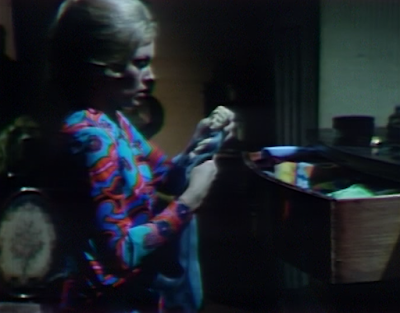 Maggie can't believe the news. Quentin tells her they can't do anything until they know how Bruno died. Angelexis walks in and is shocked to hear Bruno died. Hamilton says he found Quentin standing over his body. She says she doesn't believe Quentin murdered anyone. Quentin asks if he can get some things from his room, and Hamilton agrees, and accompanies him upstairs. Angelexis tells Maggie that she's sorry. Maggie says she wished she knew he had intended to go to the cottage—he was in no state of mind to see Bruno. Angelexis asks if Maggie believes he could have done it. Maggie says it looks bad for Quentin, and doesn't see Angelexis smiling. 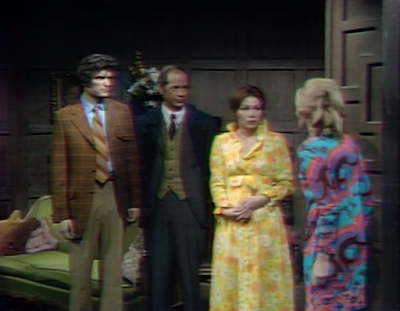 Quentin packs a few things, and Hamilton asks if there's anything else he'd like to tell him. Quentin opens a drawer and sees the statue with Bruno's handkerchief around its neck. He closes the drawer and says that if he had anything else to say, he's sure Hamilton wouldn't believe it. 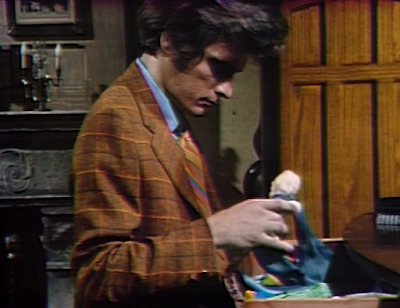 Quentin comes downstairs with Hamilton. He looks at Maggie. She asks what she should tell Daniel, and he says to tell him he's been called away on business. He asks her what she thinks of all this. She says it's all come on so suddenly. He says he wants to think about a lot of things, and leaves with the inspector. 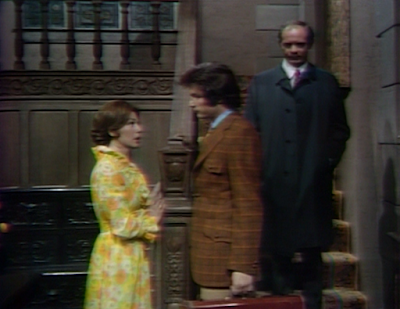 Hamilton asks Quentin if he thinks Maggie thinks he's guilty. He suggests that Hamilton ask her.

Barnabas meets Quentin at the police station, and asks if he can help prove his innocence. Quentin says the inspector has a good case against him. He says when he arrived, Bruno was alive, and when Hamilton arrived, he was dead. Barnabas asks if he has any idea what happened, and Quentin tells him he thinks he found the murder weapon just before leaving Collinwood. He says Bruno was killed by witchcraft. He found a voodoo doll with his scarf around its neck. He says he thinks it was used by someone who knew he would be with Bruno when they did it. He tells Barnabas that it was in Maggie's room, and that they've obviously been wrong about his dear little wife. Barnabas says he can't believe it's Maggie. Quentin says it's the third time he's found something related to witchcraft with Maggie's things. Barnabas assures him that she's not a witch, and that she loves him very much. Barnabas says he wants to see him in the evening tomorrow, and working together they can prove who killed Bruno, and who is trying to wreck his marriage. Hamilton comes in and says he should have the results of Bruno's autopsy within the hour. 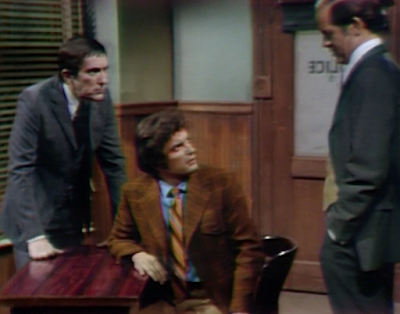 Julia says that if they had destroyed the body in Stokes' cottage, Angelique would have died, and Quentin wouldn't be in jail because Bruno would still be alive, stomping her foot for emphasis. He says there's no point going over that now. She says if they destroy the body now, they'll destroy the actual murderer. Barnabas says they must keep Alexis alive in order to prove she's guilty of Bruno's murder. 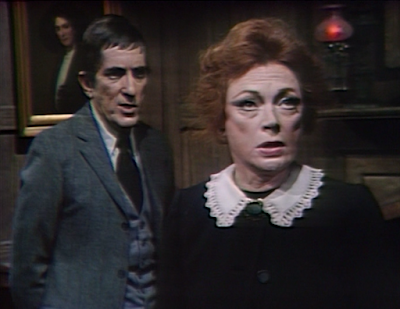 Angelexis asks Maggie if she's heard from the lawyers. She says she's sure he'll be home by tomorrow. Maggie says she hopes she gets more time. Angelexis says that while they know Quentin has a bad temper, he couldn't kill Angelique. She says they must both have faith in Quentin. 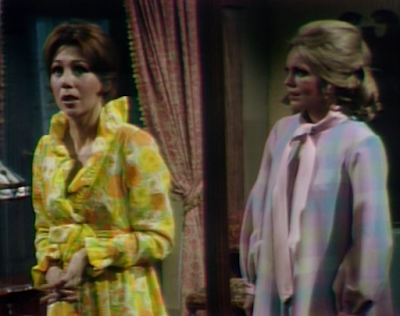 Quentin hangs out in an office at the police station. Hamilton walks in and tells him that Bruno died of strangulation. He charges Quentin with murder in the first degree. He says in view of the new charge, the judge has refused to grant bail. Quentin says he'd still like to talk to his lawyer. Hamilton says he can, but first he needs to let Quentin know that they now believe what was written in Cyrus' journal. They're going to get a court order to have Angelique's body exhumed. Quentin appears troubled, and Hamilton asks if he's afraid what they'll find. 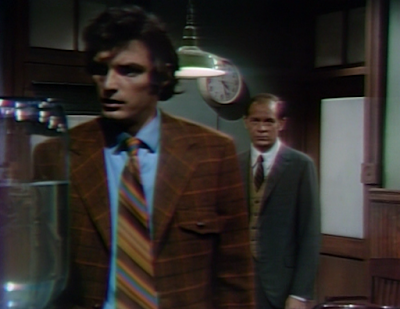 Maggie gets a call from the lawyers. She tells Barnabas that bail was denied, and the charge has been changed to first degree murder. Barnabas asks if she believes he's guilty. He asks if the police have the journal, and she says Alexis gave it to them. He's surprised. Maggie explains that she had bought the original, and Bruno had a copy of the confession. She says that Alexis was trying to protect Quentin. Barnabas assures Maggie that Quentin is innocent, and they can help him if he cooperates with the authorities and doesn't panic. 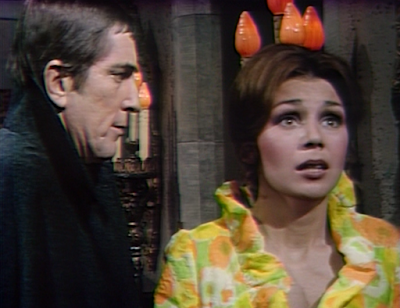 Angelexis asks if there's anything the lawyers can do. He says they can exhume Angelique's body. He asks what they'll do when they find that there is no body. He says if they find out he and Cyrus destroyed the body, they'll demand to know why. She says he has to get out of jail to prove his innocence. He says he can't. She says there's one other way, and he says escape is absurd. She says that Maggie is being used just as he is. He has to get out to clear his name. She says she'll do everything she can to help him. 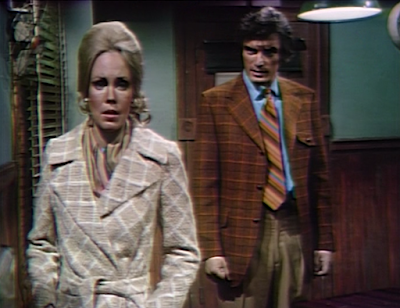 Hamilton is on the phone, trying to see how quickly they can get the body exhumed. He hears Alexis scream, and when he goes into the room, Quentin knocks him out. 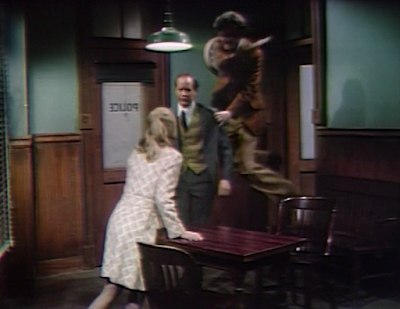 John: Barnabas in a fishbowl! Okay, it was a water dispenser, but it's a classic Dark Shadows directorial flourish we've come to expect whenever there's a mirror or magnifying glass on the set. 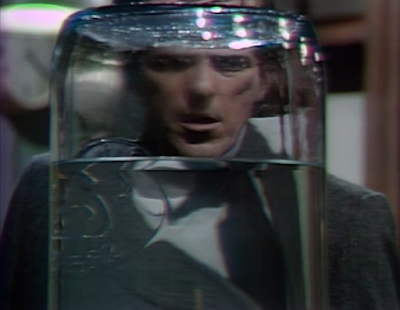 Christine: I believe water glasses have also been employed. I wonder who played the part of dead Bruno today, since he seemed to be carefully concealed so we could not see that it wasn't actually him. All of Michael Stroka's characters end up being killed off, poor guy.

John: I love how Julia decides this is the perfect opportunity to tell Barnabas, I told you so. Even he seemed willing to admit that they probably would have been better off killing the stranger in Stokes' cottage.

Christine: What are friends for? I love how she punctuated it with a foot stomp.

John: Nice plotting by Angelique. And Quentin has no idea that she's setting him up to get in more trouble at each and every turn. Did he really think that knocking out the inspector and escaping from jail could be remotely considered a wise choice?

Christine: It's a good thing he was allowed to pack a bag before being hauled off to jail, which will come in handy now that he's become a fugitive. I'm not sure how Barnabas expects to prove Angelique was responsible for the murder in order to clear Quentin. Also, is there some reason that Barnabas can not tell Quentin that Alexis is really Angelique, and the one responsible for the witchcraft in the house? 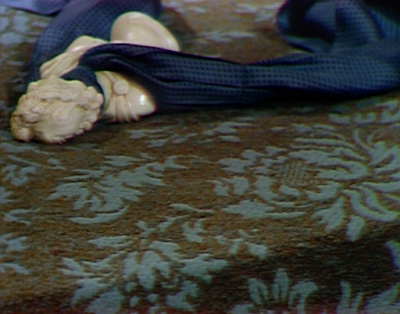