Barnabas stares at the portrait and says he must know the truth of Angelique, and calls her to come closer. Angelique bursts in screaming about her eyes, telling him to stop looking at him. He says he's looking into Angelique's eyes. She says that he knows, and he confirms that he does. 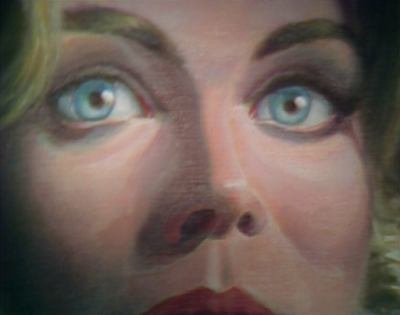 She asks how he discovered that she is Angelique. He says he's a cousin of Quentin, and a friend of Quentin and Maggie. She says he is not human. He tells her his reason for summoning him is to stop her plot to destroy Maggie. She asks what he'll do if she refuses, and he says he will stop her himself. She says Quentin is convinced she's Alexis. She tells him that she has powers stronger than his, and he says we shall see, and bids her good night. 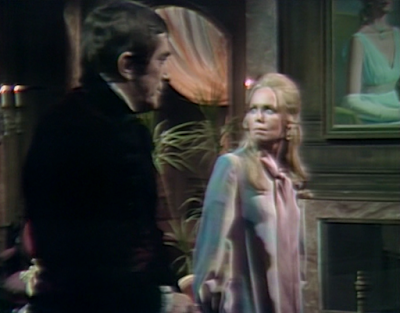 He leaves, and she picks up the phone. She calls her father, and tells him she must see him immediately. He says he's not interested. She says she has something to tell him about Angelique, and tells him to meet her in Angelique's bedroom in half an hour. 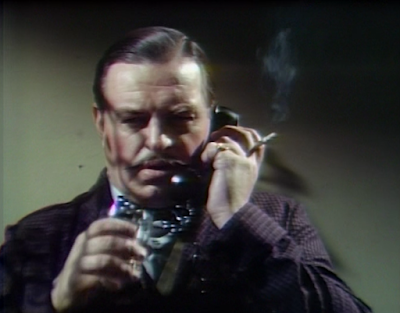 Barnabas comes downstairs when Quentin returns. He asks if Maggie is alright, and Barnabas says she's upstairs, and he should go see her. He says he will in a minute. Barnabas asks him if he ever met Alexis before she arrived, and he says no. Barnabas says he was just curious, and excuses himself. 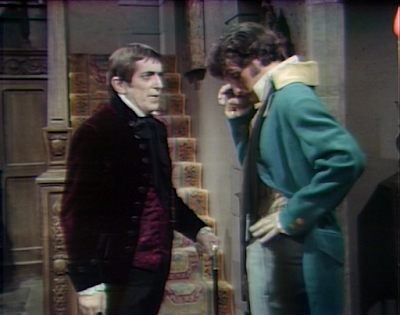 Mr. Stokes arrives and asks Angelexis what she has to say about her sister. She congratulates her father on his experiment, telling him that she's come back. He hugs her. She says for safety's sake, he should call her Alexis. He says that although she was only his stepdaughter, he is sad Alexis is dead. 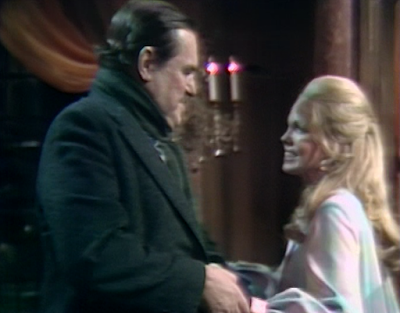 Angelique tells him that they have work to do, to get back together with Quentin. She explains that Barnabas Collins is getting in her way. She adds that she, Quentin and Barnabas have experienced weird things in the room. After a brief description, he identifies what she saw as parallel time. He describes the theory to her. 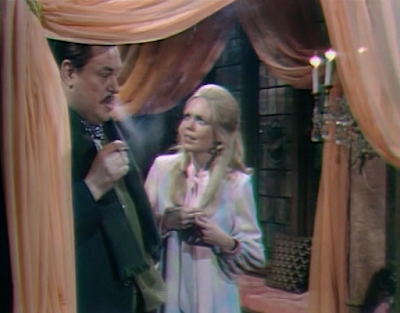 Maggie is sleeping when Quentin comes into the room. His presence causes her to wake up. She tells him that she was worried about him, and asks why he left they way he did. He asks if anyone told her the dress she was wearing. She says she knows now that it was Angelique's, but she didn't know that when Alexis suggested it as a costume. 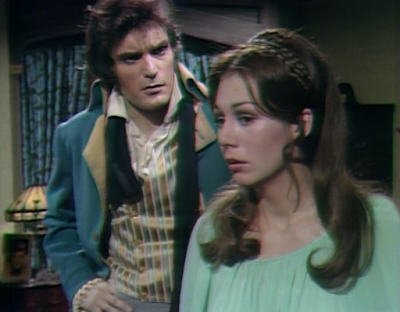 She tells him that she almost killed herself last night, when Angelique's voice told her she had nothing to live for. He tells her that she was imaging that. He says he's struggling to understand things. He says he's willing to start over again. 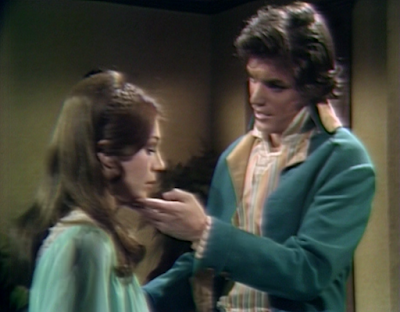 Stokes enters the old house and looks around. He finds Barnabas' cane. Barnabas comes in and asks who he is. Stokes introduces himself, and says he's a friend of Will Loomis. Barnabas takes his cane from him. Stokes asks if he's Barnabas. He says he looks very 18th century. Barnabas reminds him that there was a costume party last night. Stokes says it's a tradition started by his daughter. 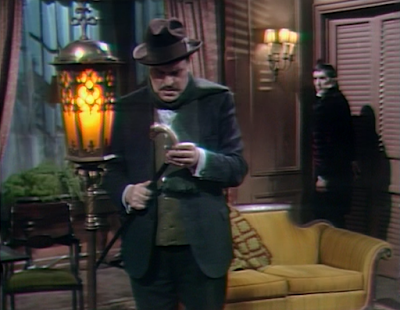 Barnabas asks if he's the father of Angelique an Alexis. He says he's her stepfather, adding that there's only one of them left now. He asks Barnabas if they have met before. The clock chimes, and Barnabas tells him that he needs to get some sleep. 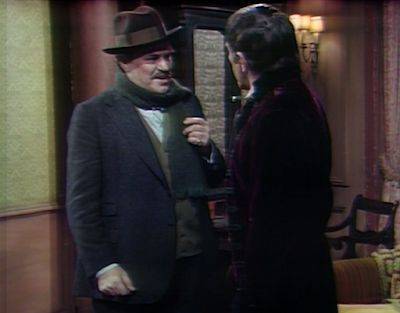 Sabrina asks Cyrus what's wrong with him. She says they haven't seen each other in days, and she doesn't know if they're still engaged. He asks if she wants him to answer that, and she says she knows it's stupid. There's a knock at the door and Sabrina goes upstairs to answer it. Cyrus hears her welcoming Maggie in. 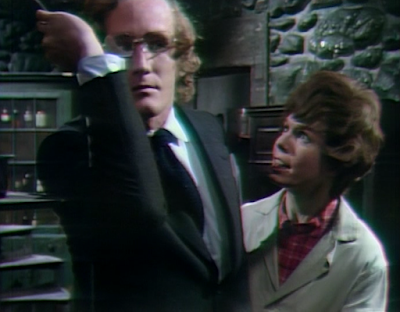 Maggie tells Cyrus that Quentin didn't believe she heard Angelique's voice from the portrait. He says Quentin will always be involved with Angelique. He tells her there are other men in the world besides Quentin. She says he doesn't sound like himself. He struggles, and asks her politely to leave. She does, and he convulses. 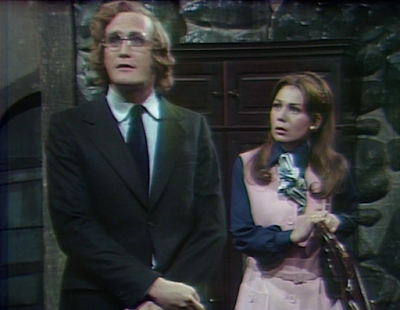 Sabrina comes downstairs and finds John Yaeger in Cyrus clothes. She says it can't be true, and Yaeger tells her it is. She asks about the experiment, and he says it succeeded beyond his wildest dreams. Sabrina tells him she loves him no matter what happens, and asks him not to go. He says she couldn't possibly understand. 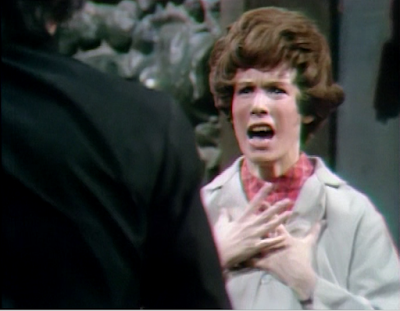 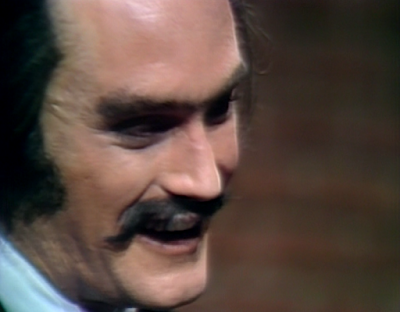 They hear Maggie come back in, and he sends Sabrina to deal with her. They come downstairs and Maggie asks where Cyrus is. Sabrina says he left out of the side door. Maggie asks if he's not feeling well, as he treated her differently than he has before. Quentin comes downstairs looking for Cyrus. Sabrina says he went to the chemist, and Quentin says he'll wait. Sabrina suggests that they go wait upstairs. Quentin asks her why she's so nervous. He then asks Maggie why she's there. She says she wanted to talk to Cyrus about what happened in Angelique's room. He storms out. 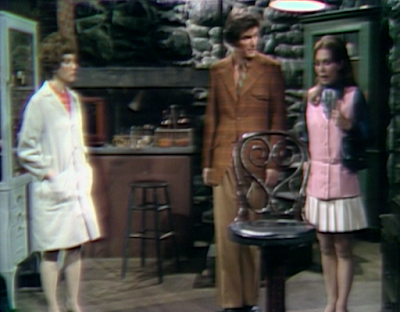 Yaeger thinks that Maggie won't be dealing with the likes of Quentin much longer. He'll see to that.

Barnabas meets up with Quentin at Collinwood. He asks about Maggie. Quentin says he thought she was getting better, but she has a fixation on Angelique. She says she thinks she heard her voice coming from the portrait. He says he was just going to see Cyrus, and Barnabas offers to go with him.

Maggie is in bed asleep when John Yaeger sneaks into her room. He approaches her in bed... 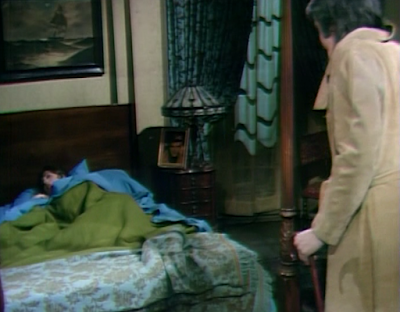 John: In addition to a doorway to parallel time, it would seem that the doorway to Alexis' bedroom is accessible to any character whenever the plot warrants it. Why there's papa Stokes now! And he didn't even have to come through the front door!

Christine: Interesting to find out that he helped orchestrate her return from the dead. Were they both expecting her to be in mortal danger to have prepared an experiment in resurrection?

John: So why the last minute lane-change, making Stokes the 'step-father' to Angelique and Alexis. And what does that mean for his unnatural fondness for one identical twin over the other?

Christine: I hate to guess. I wonder what happened to their mother and why she is never mentioned. Perhaps we'll get filled in on the Stokes family history at some point, though I wouldn't count on it.

John: Sabrina seemed a little quick to accept that Cyrus and Yaeger were in fact one and the same. Of course, her devotion didn't seem to register with Yaeger. He seems more interested in just about every other person in Collinsport than Sabrina.

Christine: The Collins family really needs to start locking doors with all the strangers traipsing in and out of the place. Yaeger seemed to have no trouble getting into Maggie's bedroom. Since Cyrus destroyed all his potion making equipment, I wonder if he is going to be stuck in Yaeger form forever now, or if he will be able to revert back to Longworth without potion.