The zombie horde carry Julia's unconscious body downstairs. Roger returns to Collinwood and is confronts them. He demands that they put Julia down, but he is also knocked unconscious. The zombies leave Collinwood with Julia. 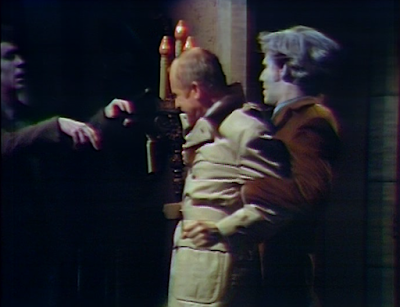 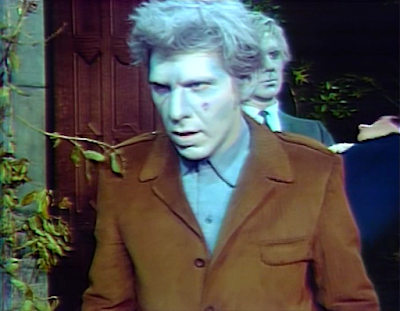 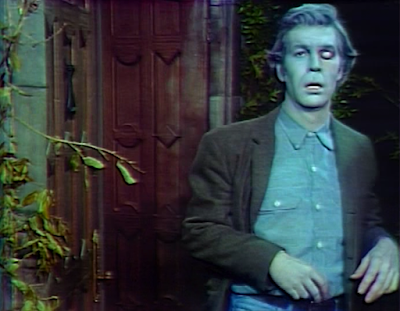 Julia awakens in the carriage house. She wonders why they have left her alone there. She goes to the door and finds a zombie guarding it. She goes back inside, and Sky comes in. He tells her that it's nice to see her again. He invites her to ask no questions and enjoy herself. She points out that the men who brought her there are dead. She asks if Blair has such power, and then realizes that Jeb must be the one responsible. Sky assures her that Jeb is there, and nods at a door. She asks if that's his new room, and then if he's going to kill her. He says he won't, provided that she does what he asks. 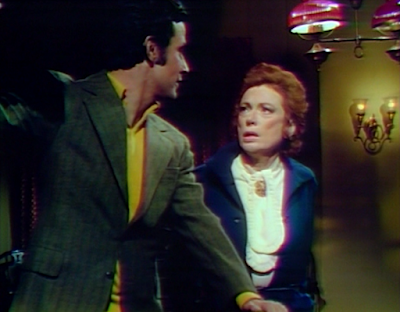 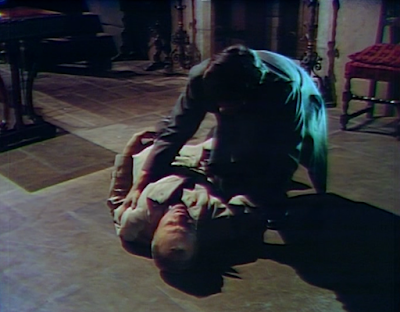 Sky offers Julia a sherry, which she impolitely refuses. She tells him that she'll never reveal the location of Barnabas' coffin, if that's what they're after. She then hears breathing behind the door. Julia asks if Jeb's in his other form. Sky offers to show her what he looks like, and she refuses. Sky tells her that she will go in that room, because Jeb wishes it. She opens the front door, and the zombie is still there. 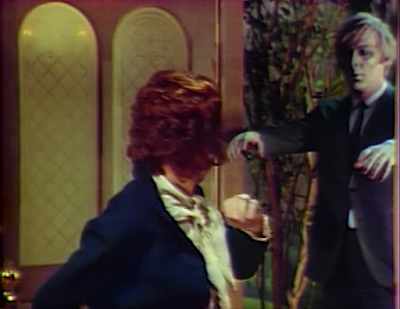 Sky grabs her and drags her into the room with Jeb, which he closes behind her. She begs to be let out. She sees Jeb in his true form and begs him not to touch her. She then sees him in his human form. Jeb tells her that whether he kills her depends entirely on her. 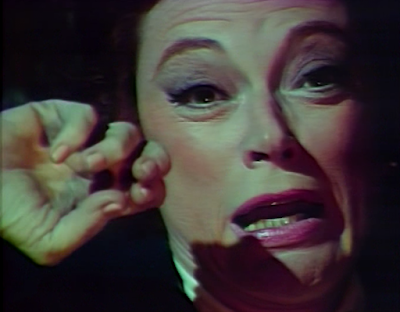 Quentin tells Roger that Jeb has declared war on them. He says they wouldn't go to the carriage house, and they can try the crypt in the cemetery. Roger says they must be more clever than the Leviathans. 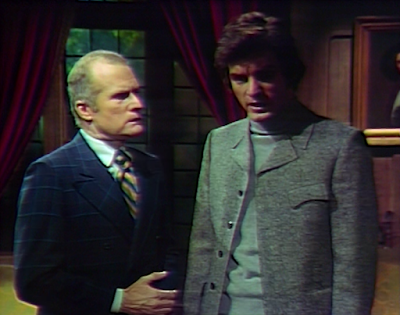 Jeb knocks on the door and Sky opens it. Jeb tells her that she can leave—the room. Jeb asks Sky to go to Collinwood to find out if Megan is back. He asks Julia if she knew Megan was missing. He says he looked for her at the old house. Julia says she'd only be there if he sent her there. 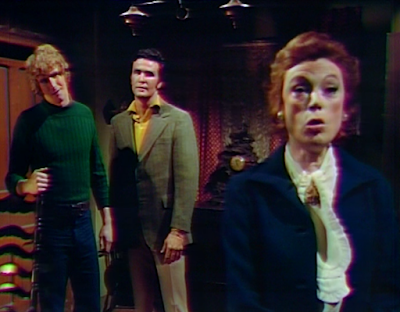 Sky leaves, and Julia asks why he let her into his room. She asks what he wants of her. He says that he knows she's curing Barnabas. He says that she's going to help him. She asks if he has control over the change, and he says that he can't. He says he never wants to be that again; not since he saw the look in Carolyn's eyes when she saw him like that. She asks if they make him go into the room, and he tells her that he wants her to help him be human. She says she doesn't know anything about the change he goes through. He reminds her that she didn't know about vampires originally, either. He just asks her to try. She says she will if he leaves Barnabas alone. Jeb agrees. She tells him to send someone to Collinwood to get her medical kit. 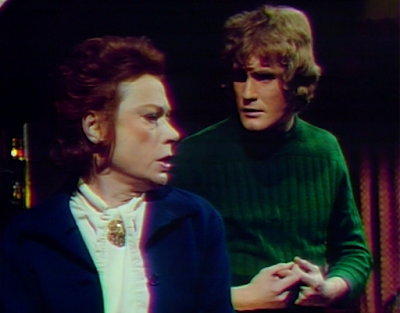 Quentin says he's going to the cemetery, and then the carriage house if they're not there. There's a knock at the door, and Sky arrives to see Elizabeth. Quentin tells Roger that he and Sky have met. He introduces Roger to him, and invites him into the drawing room. Quentin says Sky might enjoy some of their paintings. He asks if he collects weapons. Sky asks if Elizabeth is coming down, and if Mrs. Todd is there when Quentin pulls a sword from the wall and confronts him with it. He says he's sure that Sky would like to see them both. Quentin says that they would like to see Julia, and demands to know where she is. 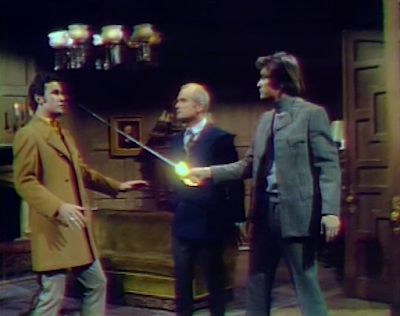 Sky is backed up to the wall, and says he doesn't know where Julia is. Quentin brings the point of his sword to Sky's throat, and asks if he's going to have to kill him. Sky says she's at the coach house. Quentin doesn't believe it. Sky says they brought her there for a reason. Roger asks what reason, and Quentin asks if Blair's there. Sky says he doesn't know anything about it. Quentin then asks how many are there, and where they are stationed. Sky tells him they're outside each door. Quentin asks what password will get him by them, and Sky says "live" is the only word they respond to. 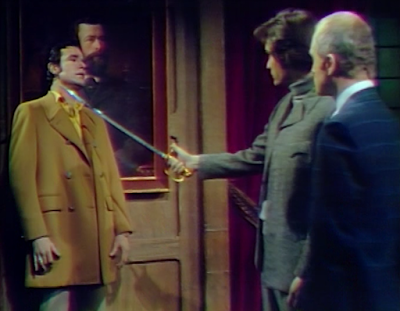 Quentin gives Roger the sword to watch him, and leaves to go after Julia. Roger forces Skye to sit down. Sky says it's not quite the reception he expected. Roger notices Megan outside the window, fangs bared. Sky makes his move, escaping out the door and locking it behind him. Roger demands that someone open the door. 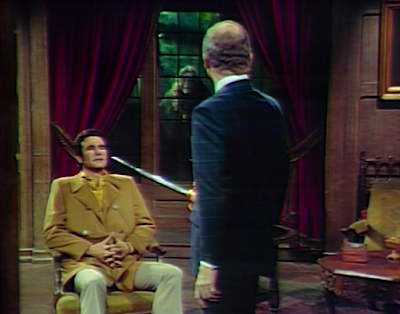 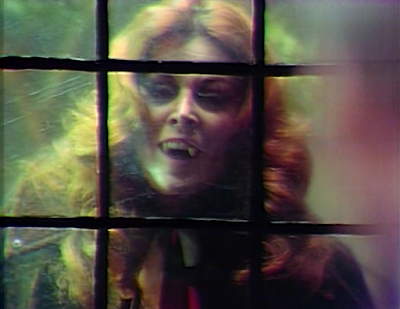 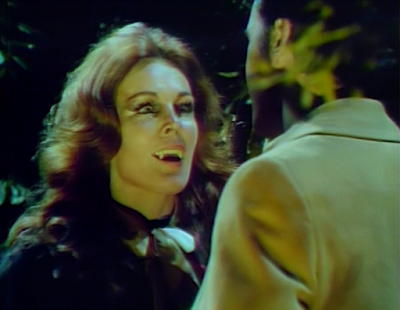 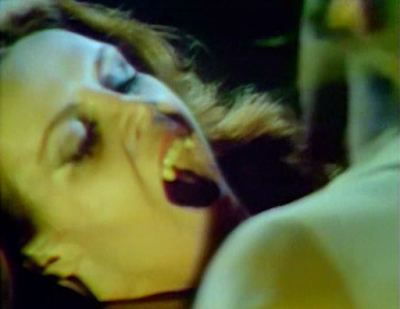 Jeb is in the carriage house when Quentin arrives. Jeb congratulates him on his entrance. Quentin grapples with him and the zombies come in and separate them. Three zombies hold Quentin, and the fourth knocks him out. The drag him into Jeb's room and place him in a coffin. Jeb stands over the coffin and tells the zombies not to grieve, as Quentin is very old, and will soon join them. 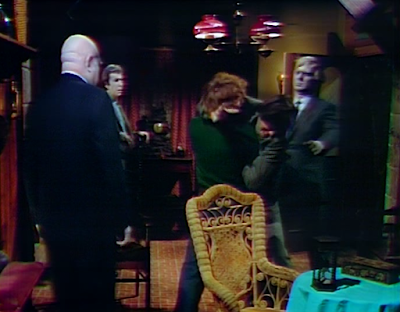 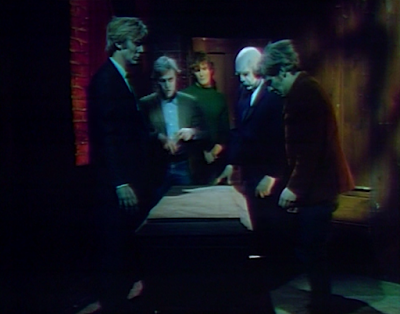 The zombies bring the coffin to the cemetery. Jeb tells them to bury him—alive. He tells Quentin that he promised him a surprise, and he keeps his promises. The zombies shovel dirt onto the coffin. 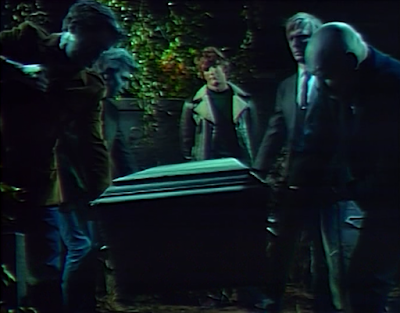 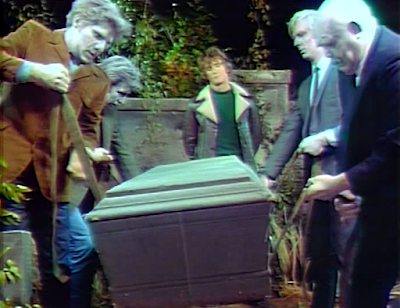 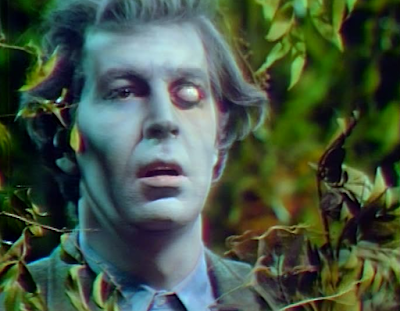 John: Damn! A fresh zombie bitch slap for Roger! And one for Quentin, too! Those guys are awesome. I'm a little bit disappointed that the zombie crew remains uncredited. As we learned from zombie sheriff Davenport, they could talk if the writers only gave them lines...

Christine: Then Dan Curtis would have to pay them more. He might be able to afford one talking zombie, but not four. I prefer to believe these mute, outstretched arm, garden variety zombies differ from zombie Sheriff Davenport because they weren't killed by the Leviathan monster. I'm just surprised it took four zombies to put a coffin in the ground when it usually only takes one man to do the job. Incidentally, you can find the names of the zombie actors on IMDb.

John: Wait—Jeb is becoming a reluctant Leviathan? Is this just a ploy to trick Julia, or is he really going to follow in the footsteps of Barnabas?

Christine: Oh c'mon! It's getting a bit ridiculous for all the monsters on the show to renounce their true monster form and express a desire to be human! I'm beginning to sense a real prejudice towards supernatural beings on this show. I have to wonder if Julia is trying to trick Jeb into thinking she will try to help him become human, or if she really intends to do it when his human form is as despicable as his Leviathan form. Also, where was she when Quentin was getting subdued by zombies? It's not like the carriage house is a 40 room mansion.

John: Isn't this the second time someone has broken something when removing a decorative sword from the wall in the drawing room? Was Quentin the one who did that in the past? And then Roger can't help but turn to watch as someone offscreen tries to clean up the broken glass. Doesn't Quentin know that there are plenty of loaded guns stashed in the desk drawer? That would have been so much easier (and likely more lethal).

Christine: Quentin has more of a flair for drama that is better expressed by the drawing of a sword than the pointing of a pistol. Aristede was able to pluck a sword off the wall without any trouble in Episode 877, and Quentin pulled one on Barnabas in Episode 703 and 704 without destroying the furnishings, but that's as far as my research went. What fool put a lamp there anyway? Isn't that where the brandy bottle is supposed to be kept? Which begs the question, who took down Joshua's portrait and hung the 1897 swords on the wall in its place? Speaking of portraits, it was nice to see the portrait of Collinsport founder, Isaac Collins, hanging in the drawing room today while Sky was being held at the point of a sword. 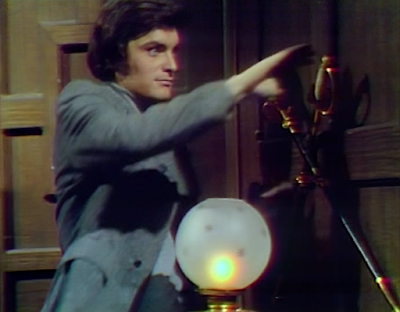 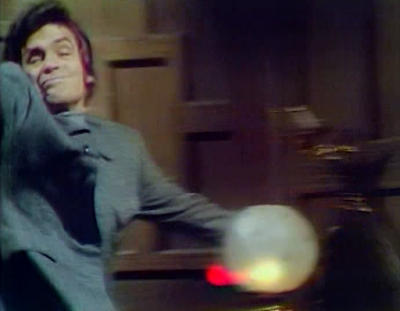 IMO, today's episode was a real cluster. So, Jeb doesn't want to kill Julia, he just wants her to help him? If he just wants to becomes human, then why would he want to kill the others? As much as I love the zombie henchmen, did he really need them to get Julia to the carriage house? Why go to all that trouble when he could just have Sky or Bruno (or both) grab her? It's episodes like this that help give this story line a bad name.