Bruno asks Chris if he'd like to see Sabrina. Chris lunges at him and Bruno punches him twice before drawing a knife, saying that this is the way he fights, not with his fists. He asks with Chris dead, who would be left to rescue Sabrina. 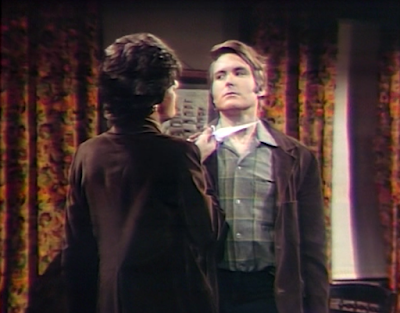 He forces him into a chair, and Chris asks Bruno where he has Sabrina. Bruno calls through a door, telling her that she's to make no effort to come out before he opens the door, revealing her to Chris. She assures him that she'll be alright, and tells him to do whatever he must to get out of the house. Bruno locks her in the room. He tells Chris that tomorrow the moon will be full. Chris asks what he wants. Bruno asks for the pleasure of his company until dusk tomorrow. Chris asks what he's going to do. Bruno says he has an enemy, and they need to destroy the person who is keeping him alive. 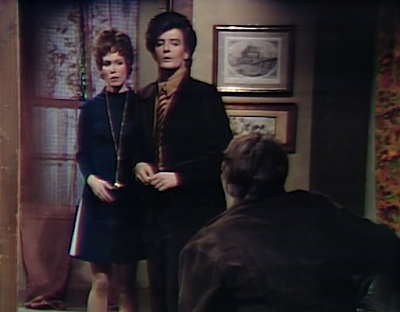 Barnabas explores the empty room in the East Wing. He wonders if there truly is a parallel time band as Julia and Stokes have surmised. He wonders why he can't always see them. 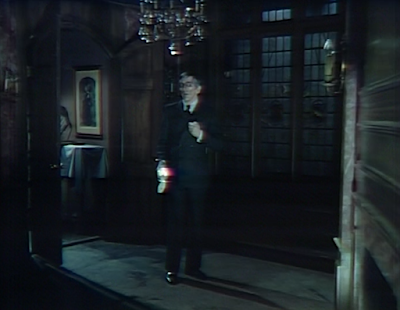 Carolyn apologizes to Roger, and then goes upstairs to sleep. He sees Barnabas descending the stairs and asks to speak to Roger about a room in the East Wing. 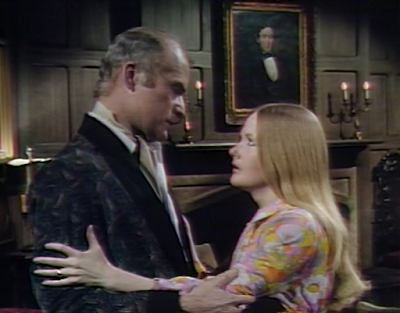 Bruno torments Chris about the moon, and asks if he's going to help him. Chris says he'll never help him, and Bruno says if he wants to save Sabrina, he'll change his mind. He opens the door to Sabrina's room and lets Chris join her. He tells her to convince Chris to do as he asks. 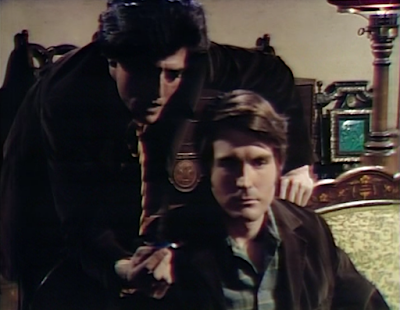 Chris and Sabrina embrace. She says she's afraid for him. He says they'll find a way out, and she tells him there is no way out. She asks him to hold her. 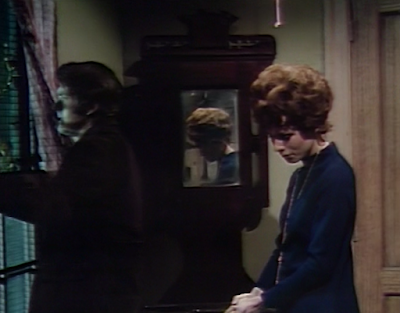 Roger finds Barnabas' story incredible. He says he wants to see the room. Barnabas asks him to keep it confidential, and Roger agrees.

Upstairs, they find the room empty. Barnabas assumes Roger doesn't believe him. Roger says that a year ago, he wouldn't have, but he does now. They leave the room and Roger asks him what it all means. Roger goes to his room, and Barnabas says he's going to go through a door that leads directly to the old house. 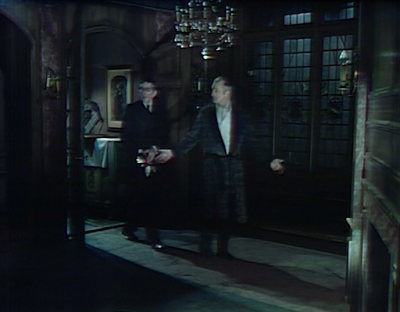 Barnabas closes the door and hears Roger's voice. He re-opens the door and finds Roger in the room in parallel time, toasting the portrait of Angelique. 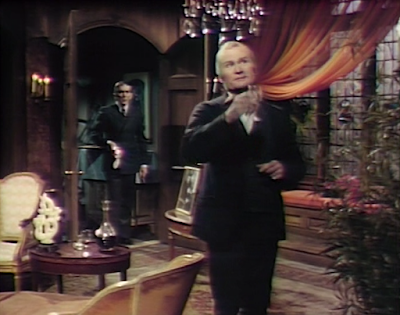 Carolyn comes into the room and he says that she wouldn't like her there. She says she's dead, and making her whirl in her grave would be worth it. Carolyn searches the room for her husband's book, which Elizabeth threw out of the room yesterday. They go into a bedroom to continue her search, and Roger tells her to leave. Carolyn closes the door on Barnabas as he calls to her. When he opens it again, the room is empty once more. He's surprised to find that Carolyn is married to Willie, and that Quentin is the Master of Collinwood. 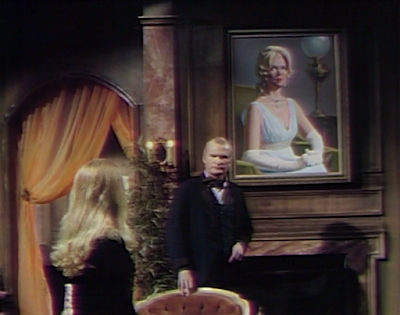 Bruno calls to Chris through the door. He opens the door and tells Chris and Sabrina to come out and sit down. Bruno asks Chris if he's willing to be sensible. Chris tells Sabrina to run and goes for the window. Bruno knocks him down and Sabrina screams. Bruno says he's going to bring a certain person there at the appropriate hour. He puts Chris back in the room. Chris asks if Sabrina will be alright, and Bruno assures him that she will, as long as he does what he's told. 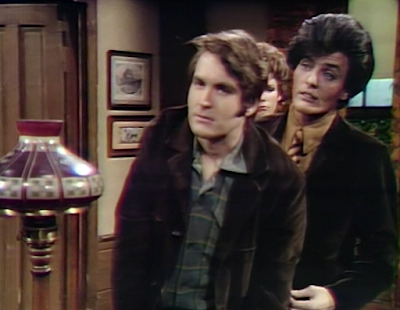 Bruno calls Carolyn, and tells her that Jeb came to see him about the shadow. She asks if he's found a way to make it disappear. Bruno says he hasn't found a way, but he has found a person. He tells her that she needs to see the person, but not to tell Jeb or anyone else she's coming. Roger comes downstairs and asks her where she's going. She says she won't be long and runs out. 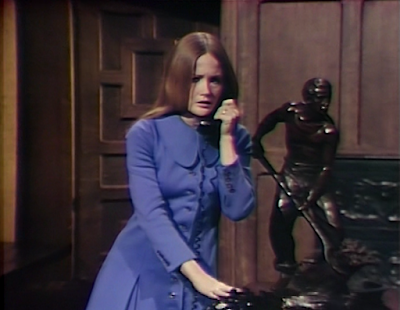 Through the door, Bruno tells Chris that Sabrina will be safe as long as he remains very quiet. If he screams, Sabrina will pay. Carolyn arrives to see Bruno, who asks how Jeb is doing. She says he knows, and asks where the person is. Carolyn tells Bruno she'll pay whatever he wants. Within the room, Chris begins to struggle. Bruno unlocks the door and opens it for Carolyn. She finds Chris on the ground and he tells her to get out. Outside the door Bruno says Jeb will have little reason to live now, and laughs maniacally. 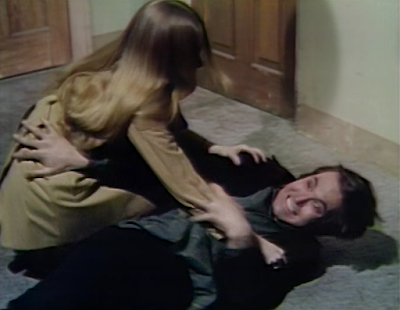 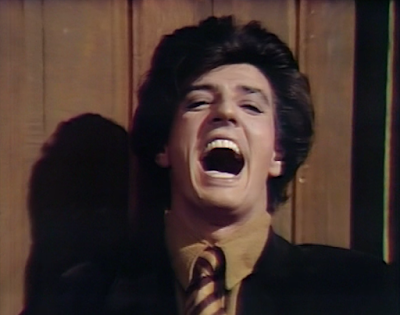 John: Aside from Josette, has Barnabas ever been so captivated by something as he is by this room in the East Wing? I'm surprised Roger was so quick to believe him, without Barnabas even producing the book of his life (or his 'ancestor') as evidence. But then I was disappointed when I realized we wouldn't see Roger watching Roger in parallel time. 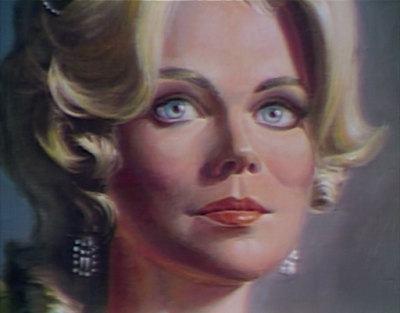 John: Carolyn and Willie? Who could have imagined that pairing. Interesting that we got to see our first extension of the set to include a lightly furnished bedroom. I continue to wonder how we will be exposed to parallel time. Will it take over the primary thread of the show at some point? 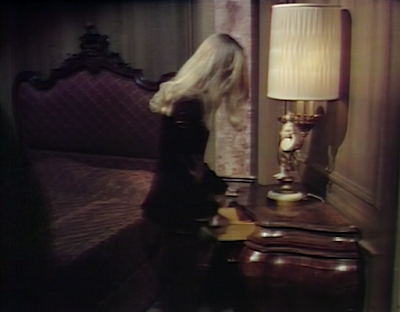 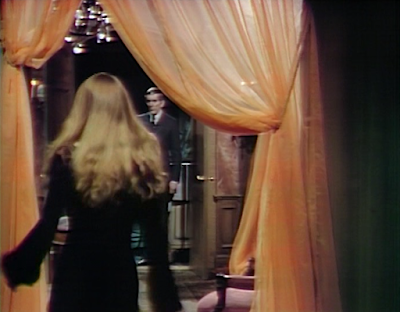 Christine: They certainly have piqued our interest about this parallel existence. How long before Barnabas finds a way to cross over? I have to applaud the characters who can remain in character and keep a straight face while pretending that Jonathan Frid is not standing right in front of them screaming at them. For a show that's prone to error, that was successfully done. 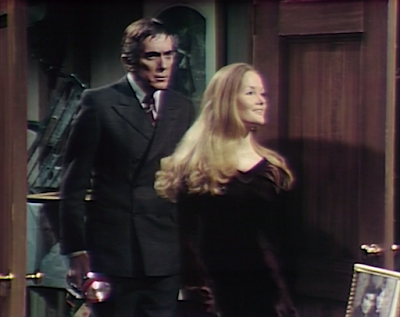 John: At first I thought Bruno was going to take advantage of the only (well, one of many 'only') ways to kill Jeb—a werewolf! I guess he realized that the werewolf has blown a couple of chances to do away with the Leviathan King. The only down side is that I don't honestly believe Carolyn is at the slightest risk of being killed by Chris, so it means the last threads of the Leviathan storyline will drag on for a little while longer...

Christine: It is disappointing that Nicholas Blair, who claims he wants to beat Angelique to the punch in doing away with Jeb, would choose such a roundabout way to destroy him. It would have been far more expedient for Bruno to lure Jeb over and lock him in with the werewolf than Carolyn. Clearly, Carolyn won't die, but how is she going to get out of it? Will Sabrina finally pull herself together to sneak up behind Bruno and knock him out with a heavy lamp, which she had multiple opportunities to do in today's episode while his back was turned to her? Though, with as big as his hair was today, it's possible it could have deflected any blow she could have attempted. 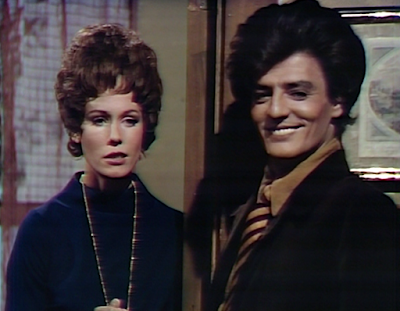 So, is Sky still tied up in the closet??? Odd that there was zero mention of him after the dramatic way the previous episode ended.

As much as I like Michael Stroka as Bruno (and partly BECAUSE OF how trendy he looks), the photo above is like some late 60's comedy blackout or Mad cartoon, that "Nowadays you can't tell the girls from the guys" kind.