Carolyn finds Jeb in the carriage house. She tells him that she has changed her mind, and can't go with him. He asks why. She says it's hard to explain, and he tells her to try. He gets angry, and when he grabs her shoulders, she starts screaming. They struggle and end up in a passionate kiss. He tells her it's too late, reminding her that she loves him, despite what her mother or Barnabas might say. 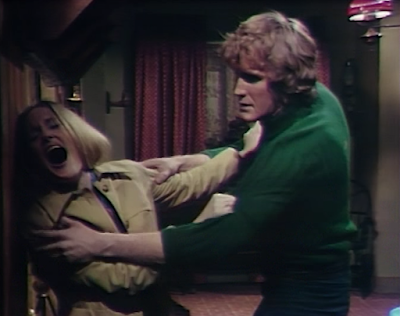 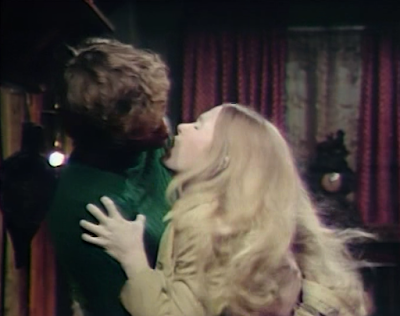 She says she's not there because of them, but because of her father. She says she dreamed of their wedding. She wanted her father to be there, but Barnabas came in and accused Jeb of killing her father. She says he admitted it, and then came after her. He tells her that everyone has nightmares. He says if she loves him, she'll have to forget about dreams like that. She says she does, and kisses him, then adding that she needs more time. He tells her that he can't wait anymore. She reiterates that she needs more time, and he offers her two hours to pack. He starts to walk her back to Collinwood, and she tells him that she doesn't need him to walk her back, as she needs to think and he would be too distracting. 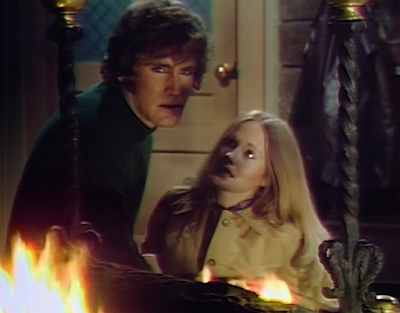 She leaves and the door swings open. He looks out, and seeing no one, closes the door. The lights go out. He asks who's there. He says he knows it's Paul Stoddard. He says there's nothing Paul can do. He says his daughter loves him. Peter Bradford appears with a noose around his neck, and asks Jeb if Carolyn loves him as much as Victoria Winters loved him. 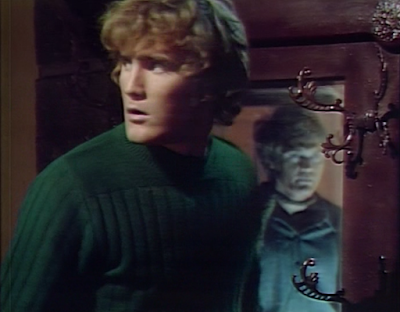 Jeb recognizes him, and realizes that it was Peter who saved Maggie and Willie. Peter says he also saved Julia, burned the book, warned David, and put the noose around Bruno's neck. He says he knows the way to kill Jeb. Jeb says he can't kill him, as he's only an illusion. Jeb says it wasn't his fault Vicki killed herself. Peter says Jeb sent Vicki over the cliff on Widow's Hill, and then he pushed Jeb over, and he's going to do the same thing tonight. He says it may not be his hand, but someone will, and he will die the only way he can—through drowning. 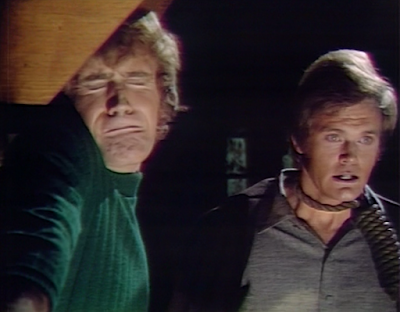 Peter blames Jeb for ruining his chances with Vicki, and he's going to do the same to Jeb and Carolyn. Jeb saye he won't let him harm Carolyn, and Peter disappears. The light comes on, and Jeb picks up the phone to call Collinwood. He tells Carolyn not to go anywhere until he gets there. She asks what he's talking about and he says he can't explain. He agrees to meet her in two hours exactly. 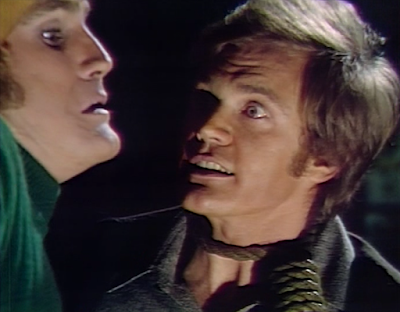 Vampire Megan wakes, and Sky asks her where she's going, and she asks what difference it makes. She says she has something to do. She tells him that he can go away, and she'll summon him when he wants him. In between those times, she says he can go where he wants and do what he wants. She leaves him. 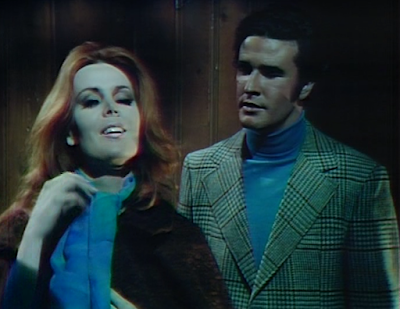 Megan appears in Philip's jail cell. He wakes up and asks how she got in. She says she made an arrangement with the guards. He asks her what's the matter, and she says she's fine. He says he doesn't understand why he's there. He says they showed him a signed confession, but he doesn't know anything about it. She bares her fangs and he screams as she leans in to bite him. 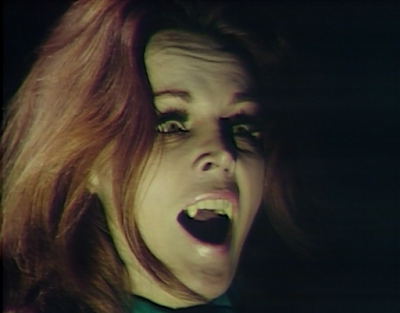 Jeb watches the clock, and then throws a drawer full of clothes into a suitcase. He hears Peter's voice threatening to kill him in one hour on Widow's Hill.

Peter appears in Philips cell. Philip tells him that he's not going to tell him anything, and Peter says he doesn't have to. He says he knows everything already. He introduces himself as centuries-dead Peter Bradford. He says they are both men in love with women who were destroyed by the same man. Philip blames Barnabas for making Megan what she is, and Peter says that Barnabas couldn't help it. Philip says that he'll get him. Peter says that even if he's found innocent, they'll think he's crazy. Peter offers to unlock the door as long as Philip does what he says. 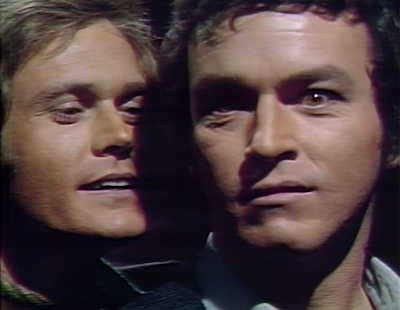 Jeb continues to watch the clock, and then calls Collinwood once more. Carolyn runs downstairs to answer the phone. Jeb tells her that he's coming right over. She says she has made up her mind, and she'll be ready. Jeb goes to put on his coat and stumbles. He falls into a chair and passes out. Peter appears and says there's very little time left for him. He rolls back a clock about an hour. 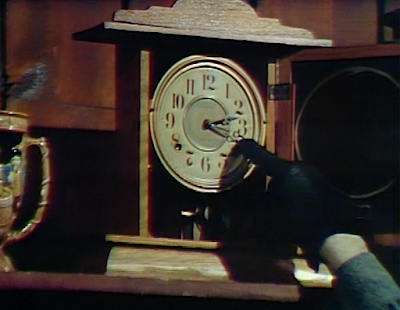 Carolyn wonders what's taking Jeb so long to arrive. She calls the carriage house, but the ringing phone doesn't wake Jeb. She grabs her coat and prepares to leave, until she remembers Jeb's admonition not to leave the house. She stops and sits down.

Jeb stirs and wakes, wondering what happened. He goes to call Carolyn, and then notices that based on the time, there's no rush. He opens the door to find Peter Bradford. He tells her Carolyn isn't at Collinwood. He tells Jeb that she's where Vicki was before she died. Jeb goes around him and leaves. 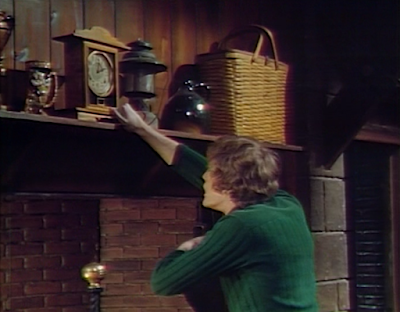 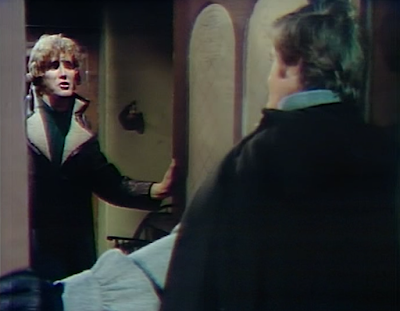 Carolyn calls the carriage house again, but there's still no answer. She starts to leave again, and is haunted by Jeb's words, "strange" and "frightening." She decides to take the back path, in case anyone is waiting for her.

Jeb arrives at Collinwood looking for Carolyn, but she's not there.

Carolyn arrives at the carriage house, but Jeb is not there.

Peter tells Jeb that Carolyn is where Vicki was, and he runs out to Widows' Hill. When he arrives at Widows' Hill, Carolyn is not there, but Philip is. Philip says Jeb is just where he was told he would be when he was let out of jail. They struggle, Jeb hanging precariously over the edge of Widows' Hill. 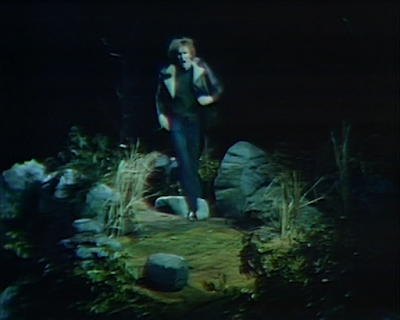 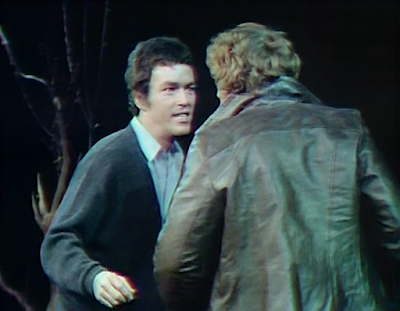 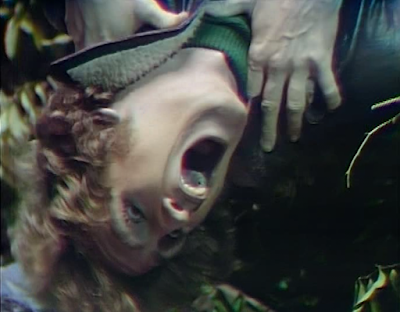 John: Peter Bradford? That explains the hanging man and all the noose-appearances. But what's all this about Jeb being responsible for Vicki's death? Jeb is a newborn Leviathan. Even if they were going to somehow tie Vicki's death to the (at the time) not-yet-introduced Leviathans, it wouldn't have been Jeb. And drowning as the only way to kill him? Did new writers take over and fail to brush up on recent history?

Christine: Things are getting more and more ridiculous! I'm beginning to think that Barnabas tripped and hit his head on a rock on his way to Kitty Josette that night in 1897, and the Leviathan diversion has just been a terrible dream borne out of his concussed brain. I do enjoy how Peter Bradford wears his noose like a fashion accessory. Bottom line is that all hope has been lost for the return of Victoria Winters, knowing that she finally fulfilled the legend Carolyn warned her about in Episode 9.

John: Oh Carolyn, what were you thinking? You've gotten every signal you could hope to receive. You confronted Jeb and he basically attacked you. And then he gives you a two-hour ultimatum when you say you need time, and yet you decide to go with him anyway? People under the control of vampires seem to make better choices.

Christine: Blech! Don't say I didn't warn you. It wouldn't be a soap opera if you weren't yelling at a character on screen to stop being so stupid. It was pretty gross the way Jeb muzzled her with his mouth. To her credit, she did appear to wipe away his sloppy kiss twice. There must be a little of that Leviathan slime left in him. 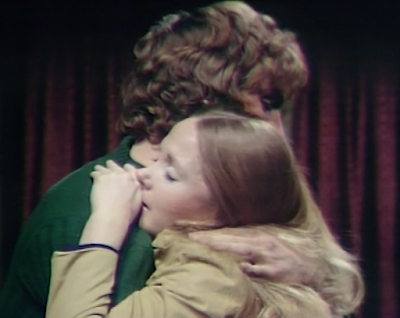 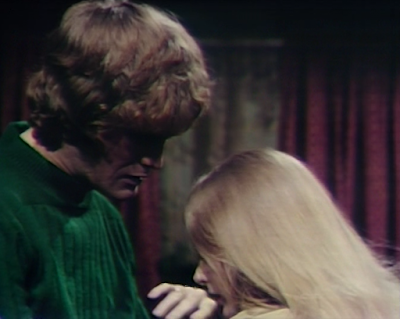 John: Again, I think it's too early in the week for Jeb to be dispatched, though I won't be surprised if Philip goes over the cliff to kiss Bill Malloy Rock down below...

Christine: That seems to be the likely scenario. What do you suppose was Megan's deal with putting the vamp bite on Philip? She seems to be getting her fill by using and abusing Sky Rumson. Was she still hungry or hoping to make him her vampire hubby?

It's kind of hard to see, but it looked like Nancy Barrett had a little bit of blood on her lip, which is what she was wiping away. Perhaps Pennock bit her by mistake?

This whole story line is now off the rails with Peter Bradford involved. I always wonder what the audience felt, watching all of this in real time. I was only 4 years old and watching it with my Mom, but have no memories of the leviathans. Perhaps they released me too (thankfully!).