Magda arrives at Collinwood and pounds on the door, begging to be let in. Quentin comes up from behind her. He brings her into the house and sits her by the fireplace. She explains that she escaped from King Johnny. Quentin asks if she sent him after Petofi. She tells him Johnny found 'A' hand at the old house. She says they think she tricked them. He tells her she must tell them Petofi has it, and she says she can't. He asks if a spell has been placed on her and she confirms it. She says he can tell them. He asks where King Johnny is, and she tells him where he can find them. Quentin says he may have a way to free Barnabas. He leaves her in the drawing room. Charity, possessed by Pansy, calls down to Quentin, but he heads into the kitchen. 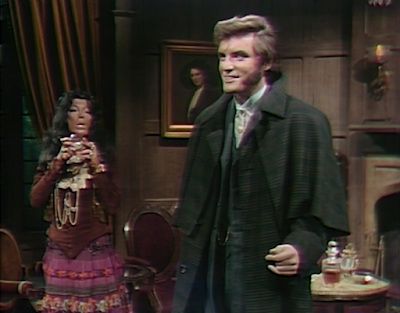 Magda paces in the drawing room.

Quentin comes to see Beth in her room. He's rather happy go lucky, telling her things may be going their way. He says the stubborn Count Petofi may have to free Barnabas. She says when Barnabas is free, he'll be angry with her. Quentin says that Barnabas knows what Petofi is capable of. Charity eavesdrops from outside Beth's room as Quentin says she must help him free Barnabas. Charity peeks in to see them kissing, and is very jealous. 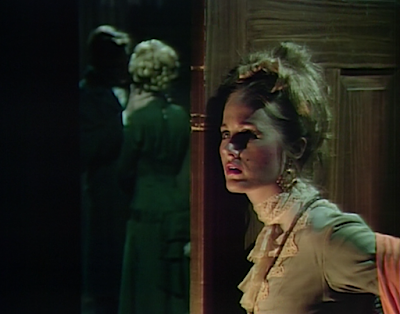 Quentin writes a note and gives it to Beth. He confirms she knows what to do in the event he doesn't return by 1pm. He tells her to protect Magda, and not to let her out of the house. He leaves, and Beth places the letter on her dresser. 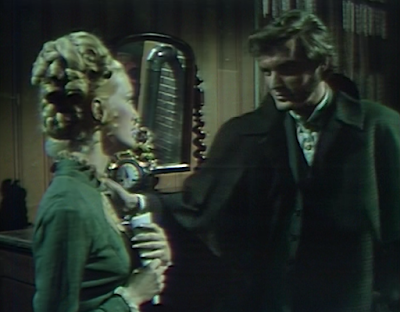 Magda sits by the fire, drinking, when she hears a noise outside. She looks out into the garden, and then hears the door behind her open. Beth comes in and takes her to the kitchen. Magda asks where Quentin is, and Beth says he's gone to see Count Petofi. She checks the clock in the foyer. 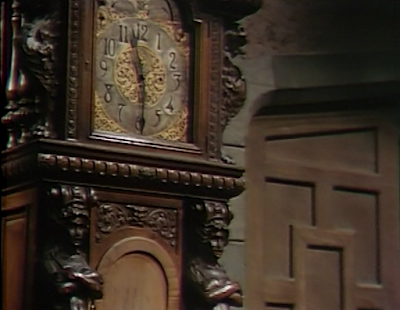 Petofi is in his lair, conducting music in his head, when Quentin arrives. Petfoi tells him he's thinking about returning to Italy. Quentin tells him he might want to go now, since he won't be going to the future. Quentin says he's there to get Barnabas. He tells Petofi he has an hour to decide before the gypsies find where he is and what he has. 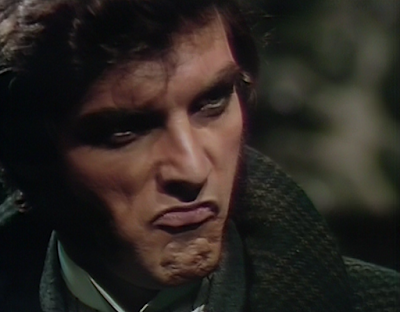 Quentin tells him that if he doesn't return to Collinwood, a note will be delivered to King Johnny telling them. Petofi says all he has to do is find out who has the note and intercept it, and adds that he can make Quentin tell him. Quentin says there's no need for him to force him, and says that he chose Angelique as his accomplice. He says there's nothing Petofi can do to control her mind. He tells Petofi to free Barnabas. Petofi tells him to leave, and threatens his life if he doesn't. Petofi then invites Quentin to sit down and enjoy some brandy and a cigar. He adds that it might be the last thing he ever does. 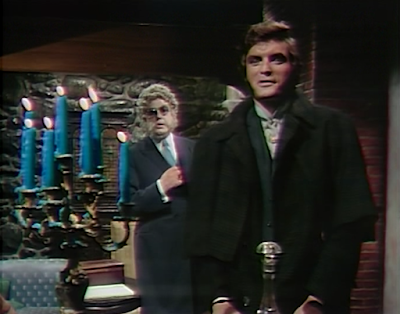 Charity comes down stairs, thinking that she's not going to lose Quentin the way she lost Carl. Charity goes into the drawing room and takes out a vial of poison. She thinks Quentin will be surprised to find Beth dead. 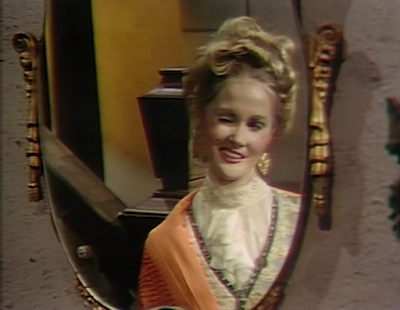 Petofi offers Quentin another drink. He passes. Petofi tells him he could kill him in a number of ways other than poisoning. Quentin says he could, and the gypsies would still find him. 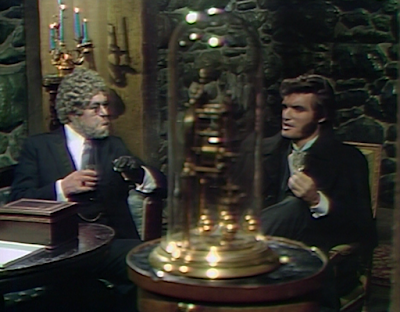 Beth is in her room with Quentin's note when Charity comes to her door. She tells Beth she needs company. She invites Beth to sneak down to the parlor for a brandy. Beth says she'll get Charity's father. Charity tells her to come downstairs, and she grabs the note and follows her. 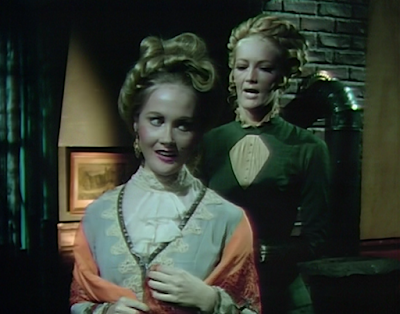 Beth follows Charity into the drawing room. Charity pours them drinks, and pours the poison into Beth's. She mentions that she knows she's supposed to meet Quentin. Beth says that she's not meeting him, but she does have to do something for him. Charity hands her the drink, and she starts to take a sip when the clock chimes. 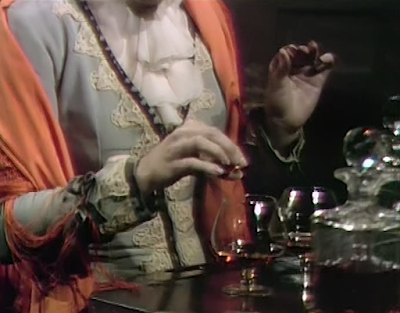 Quentin tells Petofi he has five minutes to decide before Angelique goes to King Johnny. Petofi says he will have moved on by then. Quentin says that he can move, but they'll know the truth. 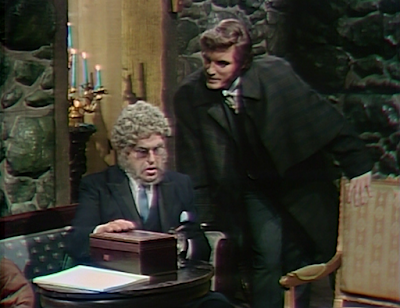 Charity tells Beth to finish her drink, and suggests a toast to Quentin. Beth toasts and finishes her drink. She says she has to go, but collapses before taking any steps. Charity stands over her and says that Quentin loves her, not Beth, and she had to do it. 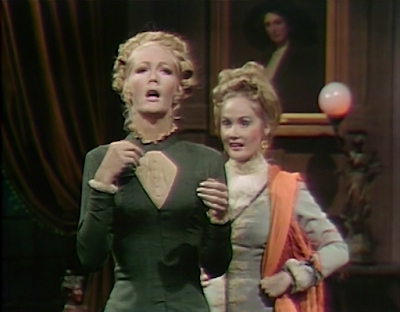 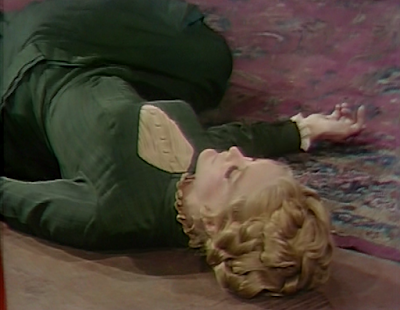 John: The front door to Collinwood is always unlocked, as evidenced by Quentin opening it. So did Magda just bang on the front door for dramatic effect?

Christine: Despite all the gypsy aspersions, I believe Magda was just being polite by not barging in to a place where she does not live and is not altogether very welcome.

John: As Quentin laid out his plan, I was disappointed thinking that Petofi would do the same thing to him that he had done to Magda. And then Quentin proved he was smarter than I gave him credit for by claiming to have told Angelique. A brilliant idea, although it didn't appear to impress Petofi, who it looks like has called his bluff (thanks to Charity's intervention with Beth).

Christine: Too bad Angelique is not really on board to back him up.

John: While I might have believed that Pansy Faye traveled with poison, I highly doubt that Charity would have a vial at her disposal. I guess she sought out the Collinwood family poison closet, the source of all poisons used in the house in the past several years...

Christine: I feel the opposite way. I don't think Pansy Faye was the kind of character to go around poisoning people, and certainly had not developed enough of a relationship with Quentin to want to kill off the competition for him. Charity, however, did have a thing for him, and clearly comes from bad stock, so while she may not have had poison on hand, perhaps she went rooting around her dad's things and came across some.
Posted by John Scoleri at 6:00 AM