Jamison comes downstairs with the package containing Petofi's hand. He appears to be growing weaker as he stumbles down the stairs and out the front door. 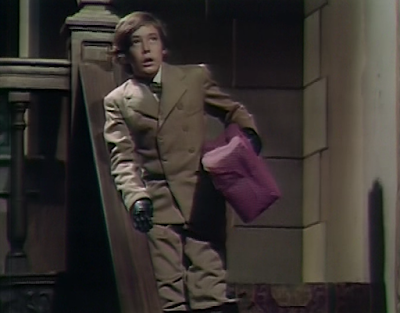 Aristede tells an unconscious Petofi that 'he' will bring the hand. 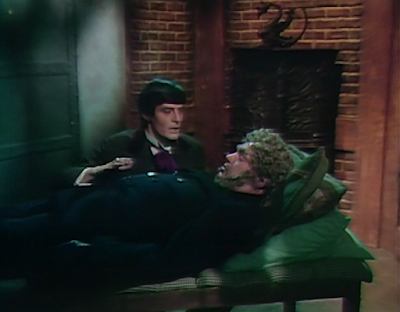 Jamison makes his way through the woods. He drops the package and collapses. Quentin finds him and offers to take him back to Collinwood. Jamison tells him to let him go. He picks up the package and Quentin asks what's in it. He says it's for Nora, but Quentin takes it. He opens it to find Petofi's hand. Jamison collapses again. 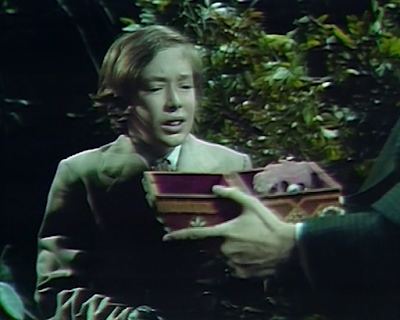 Aristede wonders what's taking Jamison so long. And then he wonders what will happen if he doesn't get the hand back. 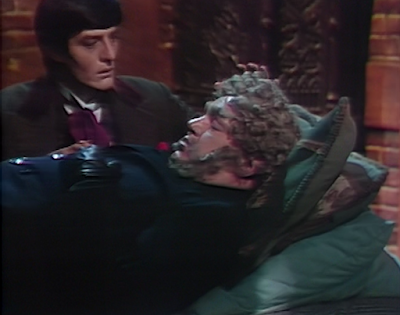 Quentin brings Jamison and the hand to Barnabas in the cottage. Barnabas tells Jamison to open his eyes. He does, and he asks for the hand, saying he'll die without it. Barnabas asks why he'll die, and Jamison explains that he's running out of time. He explains that the hand will save him. He begs Barnabas for the hand. Then he starts speaking as if he's talking directly to Aristede. Barnabas asks where Aristede is. Jamison says he must give him the hand, or he will die. Barnabas says he will bring it to Aristede if Jamison tells him. Jamison says he's at the abandoned mill. Quentin tells Barnabas that he can't take the hand. Barnabas explains that for Jamison to live, Petofi must be saved. Barnabas tells Quentin to wait, and leaves. 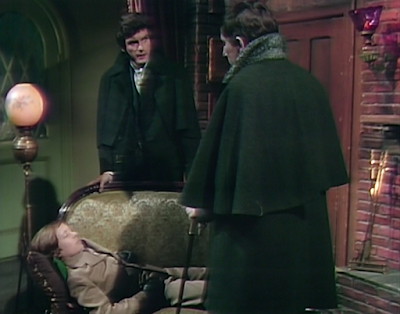 Aristede promises Petofi that he'll bring back the hand. Barnabas arrives at the mill, and is seen by Aristede. He fondles the large cross around his neck. He then confronts Barnabas. Barnabas tells him that he's there to see Petofi. Aristede forces him back with the cross. Barnabas tells Aristede that he now has the hand. Aristede laughs at him. He thinks Barnabas is trying to trick him. Barnabas explains that he got the hand from Jamison, and he wants to see Petofi. He adds that he knows Petofi is dying. Aristede says he can save them both with the hand. Barnabas refuses, until he has a promise from Petofi. Aristede says he must trust him, or Jamison will die. Barnabas reluctantly agrees, and leaves to get the hand. 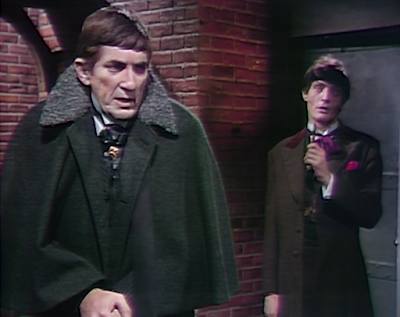 Quentin sits with Jamison, and professes his love for the boy. Barnabas returns and says he's going to give the hand to Petofi. He takes it. 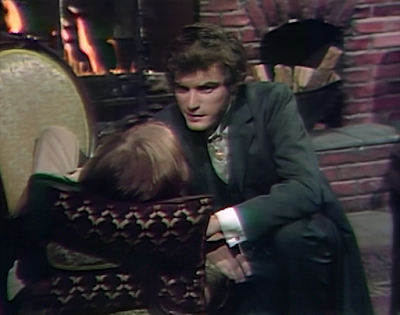 Aristede points out that Barnabas is coming. He hears him arrive and asks him for the hand. Barnabas hands it over to him. He tells Barnabas to wait outside and returns to the room with Petofi.

Aristede removes the hand from the box and begins a ceremony to revive Petofi. He places the hand on Petofi's chest. 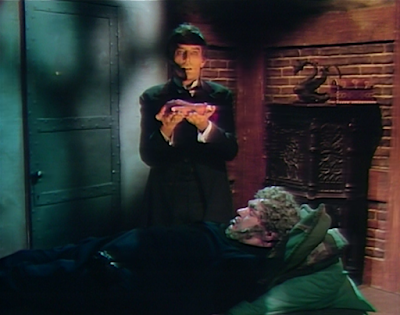 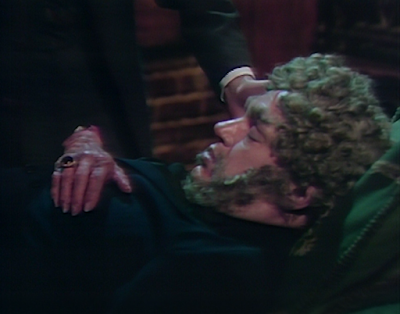 Barnabas waits for Aristede. He emerges and offers Barnabas tea. He angrily refuses. Barnabas asks what's happening. He warns that he has seen people changed by the hand within an instant. Aristede tells him to sit down and wait with him. 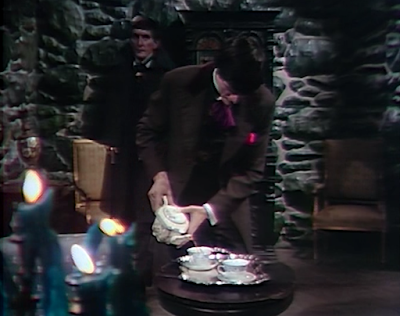 Jamison wakes and begs Quentin for help. He then calls for the hand to help him.

Aristede plays solitaire with tarot cards. Barnabas tells him that Petofi has died, and so has Jamison. Aristede asks him what his mission is, and Barnabas refuses to answer.

Quentin sits with Jamison as he lies dying. 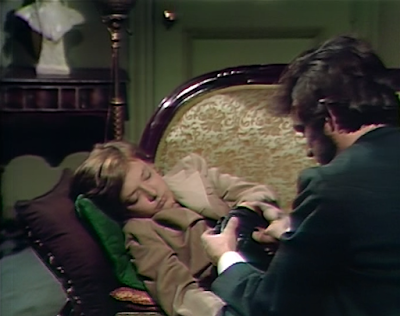 Barnabas goes to enter the room with Petofi, but Aristede stops him. Barnabas threatens to kill Aristede if Petofi has disappeared. They grapple until they are interrupted by Petofi's laugh. He comes out with his hand restored. 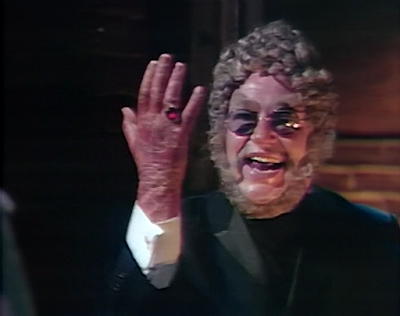 John: Once again, I feel compelled to point out that it's Petofi's own fault he waited until the last possible minute to get his hand back.

Christine: You might expect better from someone who claims to have oh so much power. Those caterpillars crawling across his face were not quite as noticeable when he was wearing his glasses. They are really something! 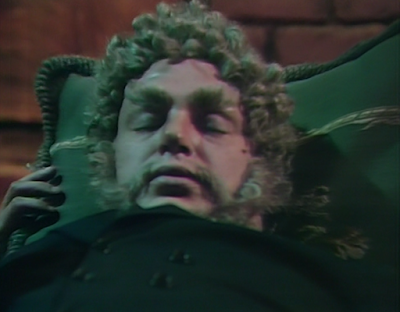 John: I love how Aristede gets all weepy realizing he may have to think for himself if anything happens to Petofi.

Christine: Me too! Gotta wonder about that guy and his relationship with Petofi.

John: Funny how unconscious Petofi has to move his hands to hide that his isn't missing. And later on he moves his hand back and forth from his side to his belly several times. Of course, Aristede doesn't even seem to notice. 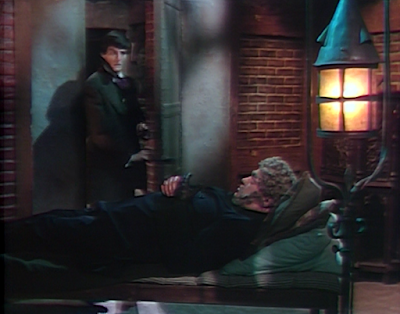 Christine: He did appear a bit shocked when he caught him with his hand out. I guess we know now that Jamison will be the one to reject Quentin, since he said that Jamison was the only one he truly loves.
Posted by John Scoleri at 6:00 AM