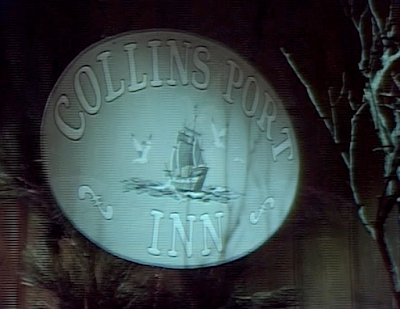 Jeremiah and Josette kiss. She points out the matching marks on their hands. 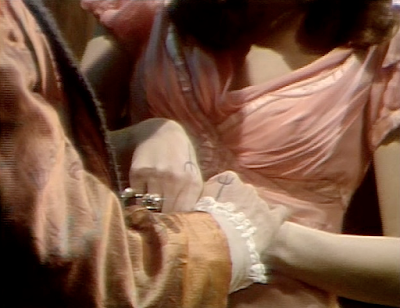 They discuss how they do not regret the two and a half days since the ceremony in which they were married. She asks if they can go back, and he says they can whenever they'd like. She says they'll stay in this room forever. He asks if she's afraid of leaving. She says she is. She says they can't be the same anywhere else. If they return to their ordinary lives, they'll miss their homes. 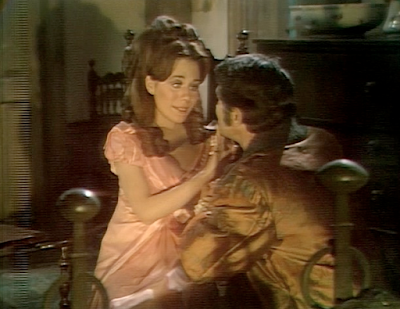 While Jeremiah sleeps, Josette stares into the fireplace. She hears her father's voice, disappointed in her for leaving them all. She then hears Barnabas saying that she told him she loved him. 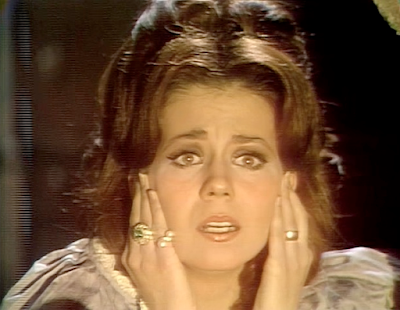 Jeremiah wakes up and she tells him they must return to Collinwood. She realizes she's let her family down.He tells her  that they knew if they had told anyone, they would have talked them out of it. He reaches for her and she tells him not to touch her. He asks her what's wrong. She demands that he taker her back, now, in the middle of the night. She tells him to get a carriage. He suggests it's just a mood. She says she realized the unhappiness she caused. She says they have no right to be happy. She asks him if he really loves her. He says yes, and she says that he has to go down and get them a carriage. He goes to kiss her hand, and she notices the mark is missing from her hand. 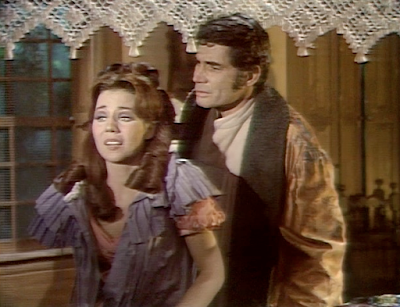 Barnabas comes downstairs, looking forlorn. André enters, and Barnabas tells him that Josette will return just as his father did. André asks if Jeremiah will. He says what if they ran away together. Even Barnabas had such a vision. André ensures Barnabas that Josette loved him. He says something he doesn't understand has happened. Joshua walks in and says he is right. He says that Jeremiah and Josette are the victims of witchcraft. He says that his sister and André's sister have discovered concrete evidence in Miss Winters' room. He says Reverend Trask is on his way from Salem. Barnabas tells his father to stop the man from coming here, and he will protect Miss Winters if he has to. His father tells him that doing so will make him an enemy as well. 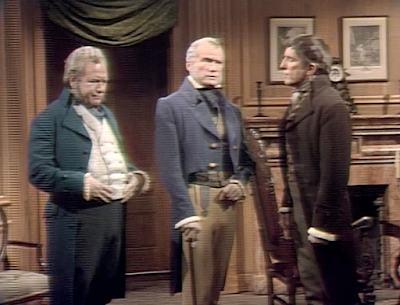 Riggs is cleaning the mantle when Jeremiah arrives. He asks where everyone is, and asks him to fetch his brother. He also asks about Barnabas, who Riggs says is at the shipyard. Riggs leaves and Jeremiah notices the mark missing from his hand. Josette enters, and he says he told her to wait in the carriage. He says no one is there, and he has sent for Joshua. She seems distraught, and he says that she wanted to come back and face them, so that's what they are going to do. He says she shouldn't be involved in what's going to happen. She says it wasn't worth it. She says they feel no love for one another. He seems to disagree with her sentiment, and says they should be kind to one another. Josette starts to leave when her father enters. Joshua follows, and points out the prodigal has returned. He asks Jeremiah what he has to say for himself. 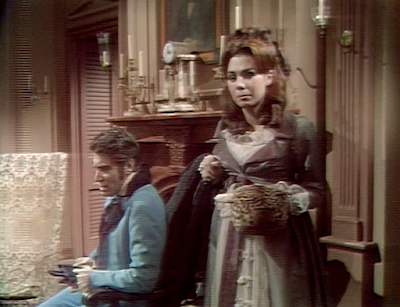 He tells them that they are married. André says that Jeremiah promised he'd stay away from his daughter. Jeremiah says they have no explanation. They understand they are not welcome, and will be at the Inn in the village. Joshua says they are married, and he will stay in Collinwood. Barnabas enters and is pleased to see Josette. Joshua explains that they are married. He refuses to believe it, and asks Josette to tell him herself. She says she is married. He asks her why, and says he was wrong about her. He asks Jeremiah how he could steal her from him. He says he thought he loved her. Barnabas asks if he loves her now. Jeremiah explains they couldn't fight it. Barnabas tells Jeremiah that he will fight him, and slaps him across the face with his glove. 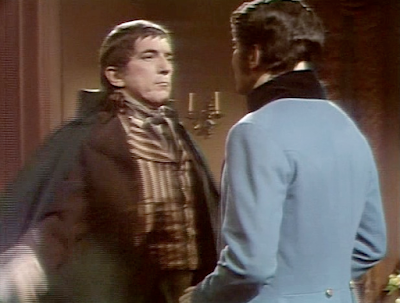 Josette cries out. Barnabas tells him to choose the weapon. Josette asks him not to do it, and he tells her that she lost that right. Joshua says there will be no duel. Barnabas says you cannot stop a duel by words—they will fight. 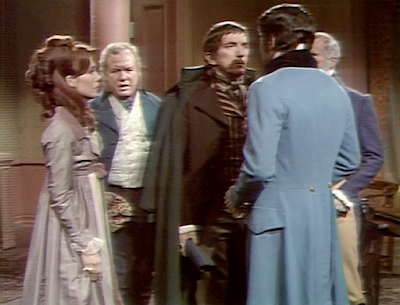 John: Maggie's bedspread has now followed Jeremiah and Josette to their marital bed. Forget the witches and vampires—that's the supernatural thing in this show that I fear the most... 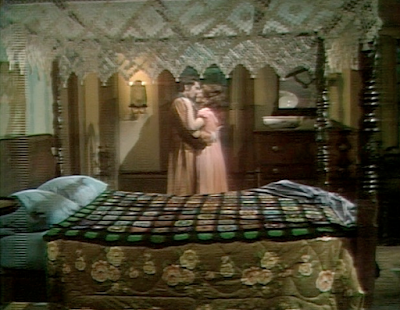 Christine: I still maintain that the portrait of Isaac Collins is the most supernaturally charged object on the show, though the quilt is a close second. I do hope his portrait will appear at the Great House once it's finished.

John: So do you think Ben had the day off, and that's why they needed a new servant in Collinwood? Too bad that Riggs missed out on all the excitement in the house. 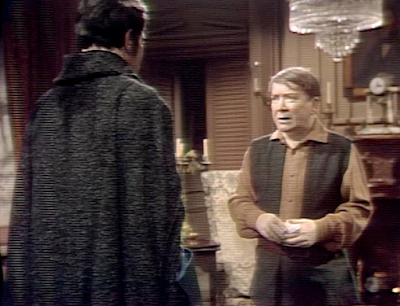 Christine: Barnabas and Jeremiah will need seconds for their duel. Ben wouldn't be able to cover both, so I suspect Riggs has arrived to back up Jeremiah, when the time comes.

John: Nice bitch slap, Barnabas! Taking the glove right from Jeremiah's hand! How will poor Vicki live with having lost her flashback love interest—if not to Josette, to Barnabas! 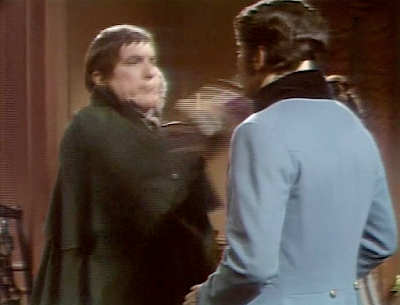 Christine: Vicki has got a date with Reverend Trask, so she may have no time to mourn another loss. Incidentally, someone in costume design really needs to address the wardrobe malfunction of 1795 trousers. Ah yes, 1795...when men were men and let you know it with their tight trousers!