Angelique is helping Josette get dressed when the Countess and her father arrive. The Countess tells Josette that she must marry Barnabas tonight, before it is too late. 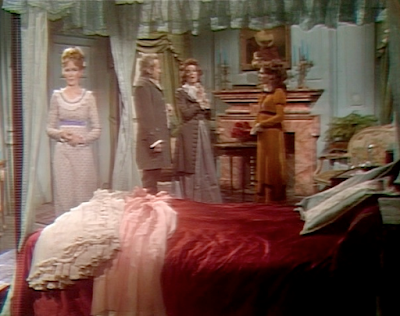 Angelique is shocked to hear this. Her father encourages her to do what her aunt asks. Andre regrets coming to America, and suggests they could return home. The Countess says Josette can't come home unmarried. She tells Josette that Barnabas is agreeable to the plan, and she says she wants to speak with him herself. 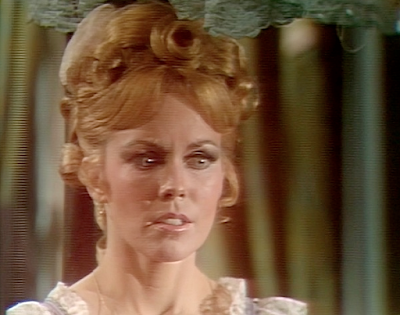 After they leave, Angelique offers to massage her head with Rosewater. She declines the offer, and then apologizes. 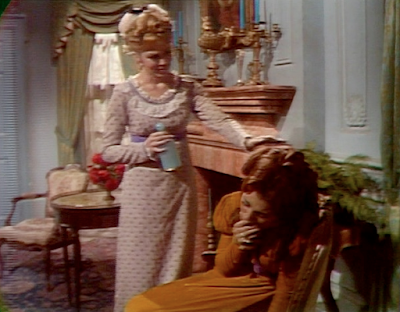 Ben approaches the cat in Angelique's room with an axe. Angelique arrives in time to stop him from harming the cat. She says she didn't turn Joshua into a cat for him to kill it. She assures him that after she has her revenge, Joshua will be brought back, and he will be kinder to Ben. She also tells him of the plan for Josette and Barnabas to marry tonight. She says she needs to cast a new spell, and she needs Ben to get her something of Jeremiah's from his room. 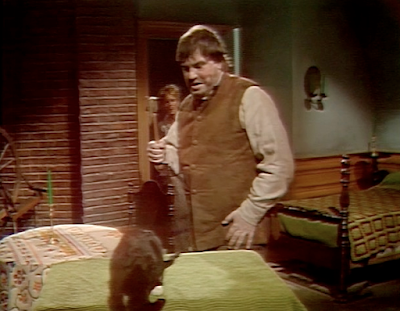 Barnabas confirms that he is ready and willing to marry Josette tonight. They kiss, and he tells her he's going in to town to arrange for the minister to marry then tonight at 9pm. 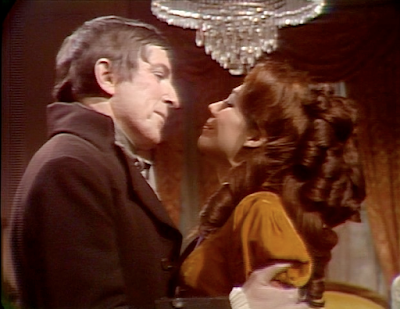 Ben delivers one of Jeremiah's monogrammed handkerchiefs to Josette. She describes how she's going to use it, and despite Ben's arguments, she explains that soon Josette will be in love with another man. 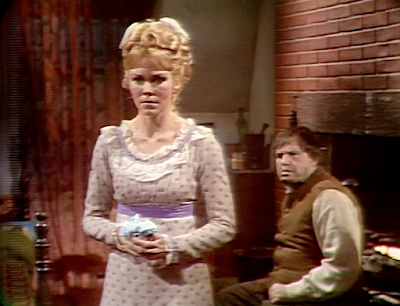 The Countess prepares Josette for the wedding. Angelique enters and the Countess hands her over so she can attend to other priorities. 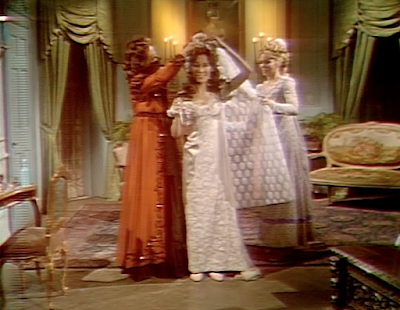 Angelique gives her a surprise. She tells her to wear it during the ceremony, and Josette explains she cannot, as it would look too conspicuous. Angelique feigns tears, and tells her that Josette doesn't like the only gift she could give her. 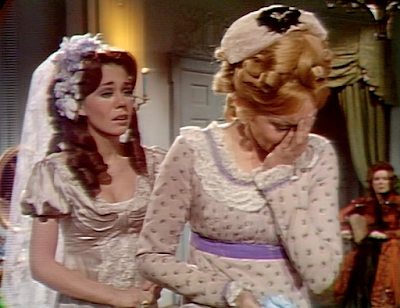 The Countess tells her it can't do any harm. Josette relents, and allows Angelique to pin it on her dress. 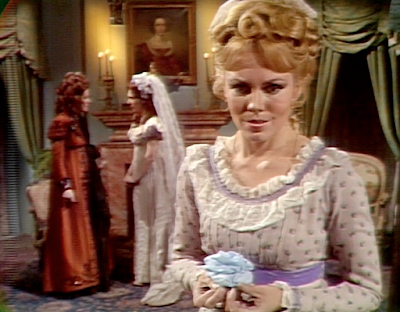 The reverend and family members are gathered downstairs, just waiting for Josette. André goes up to see what's taking her so long. 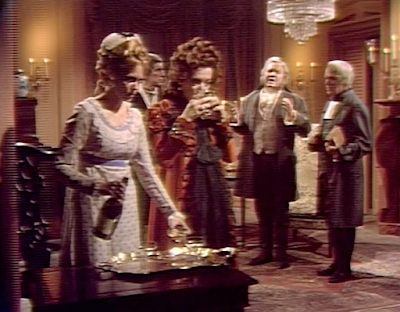 André knocks on the door to Josette's room, and when she doesn't answer, he enters her room. She's nowhere to be found. He even checks the hope chest at the foot of her bed.


Downstairs, they hear André shouting for Josette. He runs downstairs and tells everyone that she's not in her room. 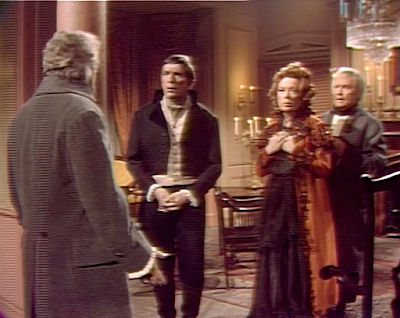 John: I know that we're limited to the number of cast members per episode, but that sure makes it hard to have big family events like weddings. Sure, Naomi may be in seclusion while Joshua is missing, and Jeremiah was planning to run-off to get away from Josette, but what about Vicki, Abigail, Millicent, Daniel...?

Christine: The wedding was rushed and they didn't have time to clear their calendars. They were all busy doing other things in their rooms. Angelique tells Ben that Joshua will eventually be returned to his normal form. I wonder why she would choose to do that.

John: Odd that the Countess, of all people, fails to see what harm Angelique's gift can have on the wedding. Her rush to judgement regarding just who the witch is will likely come back to haunt her.

Christine: Did you notice that the portrait of Josette that was last seen hanging in her room in Episode 374 was taken down and replaced with another? I guess it wasn't supposed to be there yet. 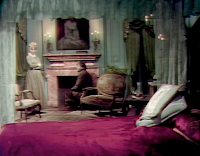 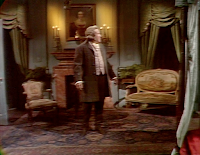 John: Ah, Angelique, if only people paid more attention to you, they'd be aware of your guilt every time your eyes went extra-wide...

Christine: Barnabas really should have figured out by now that the girlfriend he dumped might just be the one responsible for all the recent calamities.