Carolyn and Vicki have breakfast the morning after Roger's car crash. Carolyn refuses to believe Burke was responsible. Vicki describes what she saw in the garage before the accident, and Carolyn realizes she may be wrong about Burke. Vicki tells her Burke denied it after Roger confronted him, and while Roger doesn't, she actually believes Burke is innocent. 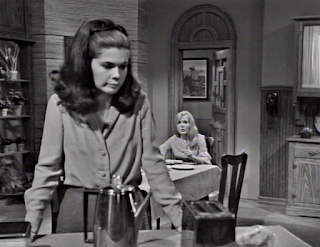 Bill Malloy visits Devlin in his hotel room. Burke reiterates that he had nothing to do with the brakes on Roger's car. Malloy said when he was convicted 10 years ago, Burke said he would be back to take over everything the Collins family owned. Malloy then asks Burke about Wilbur Strake, who had been in town two weeks before Devlin arrived. Bill discovered that he is a private detective Devlin hired to snoop around Collinsport. 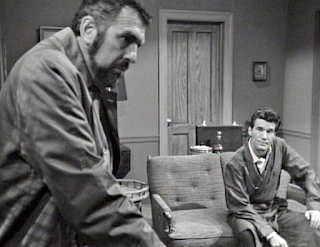 Downstairs, Liz lets Vicki know a letter arrived for her. Carolyn tells Vicki that if Burke is guilty, then she is too, as she brought him to the house.

In the drawing room, Liz takes a call from the constable saying he'll be by Collinwood in the afternoon. Carolyn tells her mother that she thinks Burke is innocent. Liz asks who else would want Roger dead. Carolyn asks what has got her mother so upset, she knows it's more than just an accident. Vicki enters and gives Liz the letter she received. It's from the foundling home, referencing private detective Wilbur Strake. Carolyn asks if it has to do with her mother's concerns, and Liz flatly denies it. Vicki wants to know if Liz is hiding something about her and her past that Burke would be interested in finding out. Liz walks out on the girls. 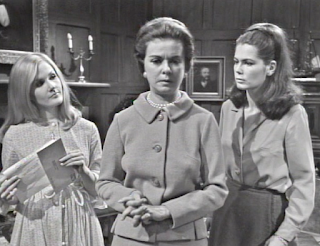 Devlin asks Bill where he heard of Strake. He admits he hired Strake for business reasons; to investigate new areas of business interests. Malloy says he asked a lot of questions about the Collins family, and Burke says they do own a cannery. Bill compliments Burke on being a smooth talker, and leaves him, for now. 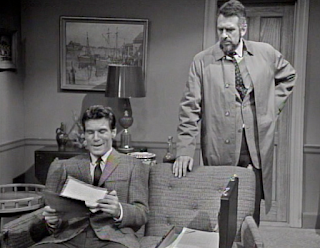 Burke calls a man named Bronson in New York, and asks him to get on a flight to Bangor, as things are happening fast. 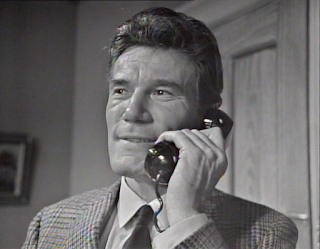 John: Burke manages to keep everyone at bay, despite the mounting evidence against his claim of just visiting Collinsport for old time's sake. Unfortunately for him, having advocates in Carolyn and Vicki doesn't appear to be swaying anyone's opinion in the house on the hill.

Christine: Burke is looking pleased as punch with himself, so something is going his way. He seems unconcerned with the accusations of attempted murder.

John: When Liz asks who else might want Roger dead, she lists off the family members, including David, but they don't give it a second thought. If Vicki had been there, I doubt she would have brought it up, but how many times has she heard David wish death upon his father?

Christine: They'd assume it's just angry talk and probably wouldn't think David capable of knowing enough about cars to pull it off anyway. If there's a question in Vicki's mind about Burke, it's probably because she's starting to add up the clues about David's recent odd behavior. It's her job to pay attention to David, so she ought to be the first one to figure it out.

John: Interesting that Liz is as much of a liar as Devlin, albeit a far less successful one. What's she going to say when the truth finally comes out?

Christine: Which truth? About the reason she hired Vicki, David's attempted murder, what's going on in the basement, what happened ten years ago, or whether or not Liz really is a witch, as the kids at school used to tease Carolyn?

More images from today's episode for your viewing pleasure:

An important episode for Vicki- the story about the cruel trick the attendant played on her when she was six helps to establish her as a wounded person who will be able to understand David, and her confrontation with Liz shows her as intelligent and assertive. Excellent use of the kitchen set to establish an intimate mood for those scenes, and a good performance by Alexandra Moltke Isles to sell them.

Not much point to the Burke/ Bill scenes, but Frank Schofield and Mitch Ryan are such dynamic actors they are always fun to watch.