Barnabas opens his coffin, and is met by the sheriff with a cross. He screams as the sheriff tells him that he knows all about him! Barnabas asks him how he knows, and the sheriff says it doesn't matter, as he pulls his gun on Barnabas. 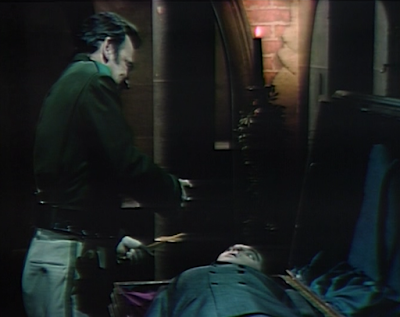 Barnabas calls to Julia, and the sheriff steps back in fear when he sees the ghost of the young girl who we previously saw with David. He says that she's the one they saw, and tells her to stay away from him. 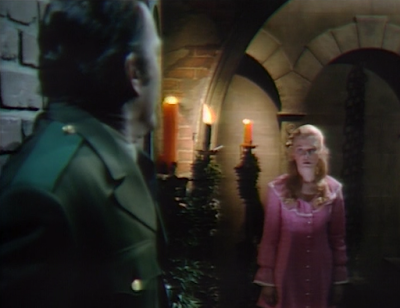 He turns, and Barnabas puts him in a choke hold. 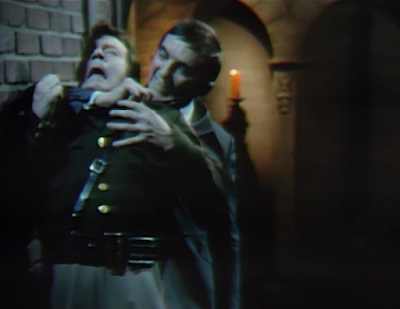 Gerard and Julia are in the old house. She cries, and asks if she's done enough for him now. She asks him to go away. She asks if he's determined for her to hear the shots—the silver bullets. Barnabas comes upstairs and she's shocked to see him. She turns and Gerard is gone. 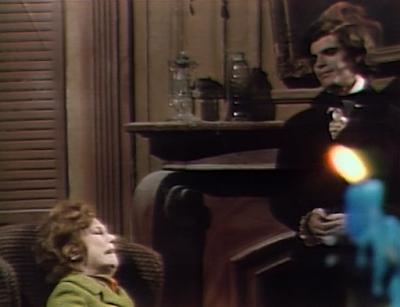 Barnabas tells her that he killed the sheriff. He says if not for Carrie, he would be dead. He says they have to get back to their own time before more police come. He says that the sheriff was armed with silver bullets, and he doesn't know how they found out about him. Julia asks him if he does, and he realizes that she betrayed him. She admits it, and says she'll do so again and again. She cries and says he's not safe. 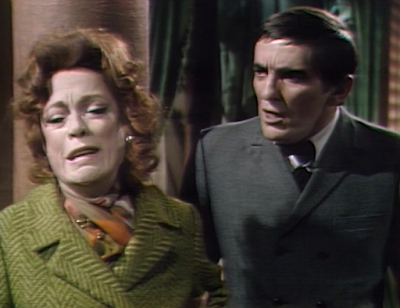 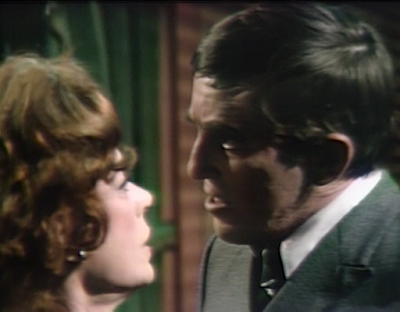 She hugs Barnabas, and asks how he can forgive her. She says she's afraid. Barnabas says that he won't leave her alone, and they must get back to their own time before dawn. He compels her to use every ounce of her will power, and she says she'll try. He says they must call Stokes and get the answers they need. 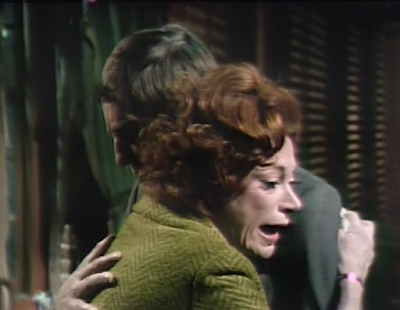 They leave together, not noticing Gerard standing outside the house. 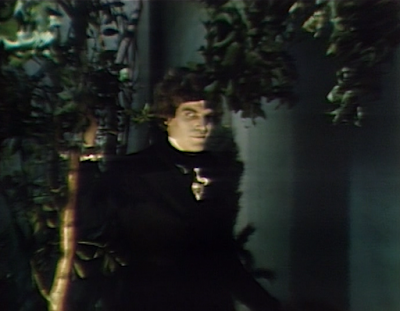 Stokes asks Barnabas if he killed the sheriff, and he confirms that he did. Stokes says he saw Gerard once himself. Stokes tells Barnabas that he cannot help him. He says he's too old and too frightened. Barnabas says they need the clues Carolyn told them about before they leave. Barnabas says they will have a seance tonight. Stokes says he'll have no part in it. He tells Barnabas that Gerard won't allow it. Barnabas tells Julia to arrange the table. Barnabas says they will be able to go back and stop things from happening. Stokes agrees to participate. The three sit at the table. Barnabas presides over the ceremony. He asks Julia if Gerard is watching her. He tells her to concentrate, saying that Carolyn will speak through her. 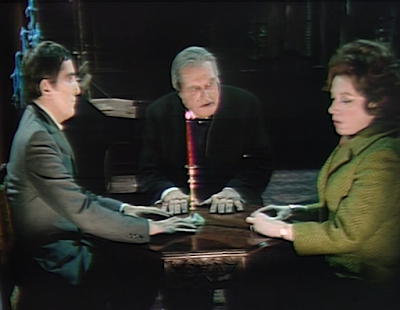 Barnabas calls to the spirits of the dead, asking them to release Carolyn to speak to them. Carolyn speaks through Julia. Barnabas asks her to explain what the clues mean. She mentions "The picnic," "The night of the sun and moon," "The murder," "The unfinished horoscope," "The night I sang my song," and "Rose Cottage." Barnabas asks what it means. Julia comes to and says he's coming, and will kill him. Stokes stays he can feel something. He gets up and walks from the table. Julia breaks down crying. Stokes sees Gerard out the window. Gerard points at him. Barnabas says he saw Gerard at the window. Stokes sits down and. Julia screams. Barnabas looks for her, but cannot find her. 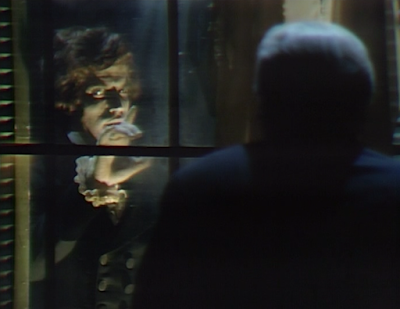 Gerard fondles a knife. Julia comes into the room and he holds it up before handing it to her. She asks if she must, and he nods. She agrees, and takes the knife. She holds it as if she's going to stab herself when Barnabas enters and tells her to drop it. She does. 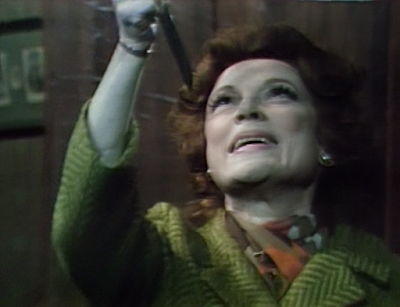 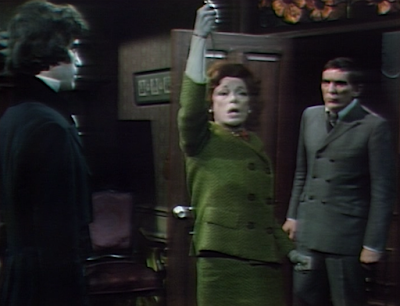 He tells Gerard there's nothing he can do to stop them. Gerard touches Julia's forehead, and she drops to the ground. Barnabas helps her up and says he'll take her to Angelique's room, but Gerard steps out of the room and locks the door. 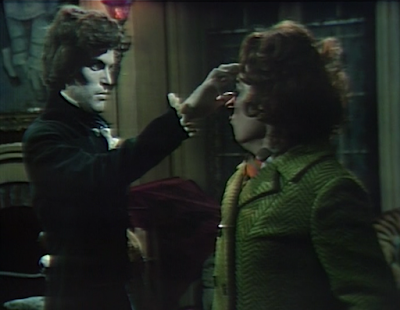 Barnabas sees Carrie, and asks her to help him again. She steps through a wall and a door appears. Barnabas opens it, and tells Julia that they can escape. 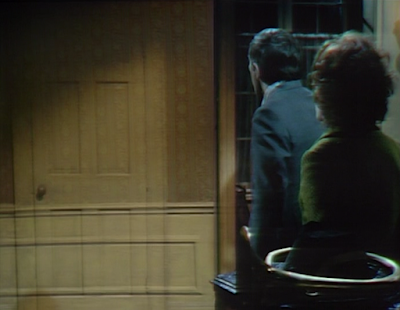 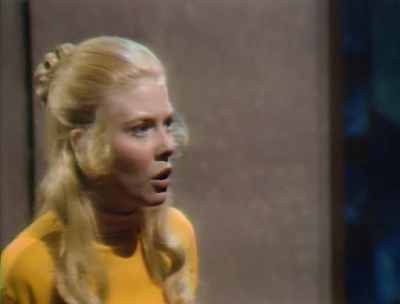 John: Fire up the seance tracker! Our first (and last?) of 1995! To be fair, it wasn't really much of a seance, though it did give Julia a chance to deliver dialogue in a high-pitched voice. Of course it was all for nothing, as we walked away with nothing learned about the clues she left behind.

Christine: They may not have learned anything about the clues, but I don't believe it was all for nothing. Now that they appear to have returned to 1970, they will no doubt be looking for Rose Cottage, avoiding picnics, and encouraging Carolyn not to sing any songs or consult her horoscope, and will probably fail miserably at recognizing any of those clues when they arise.

John: Barnabas and Gerard are placed in the same room at the same time, but don't have much of a confrontation. What a wasted opportunity after having him lurking in the shadows for so long!

Christine: I'm not sure what Barnabas could have done to him other than have a menacing stare down. While Gerard was able to kill Stokes instantly by showing him the sign of the horns through the window, it's interesting that he decided to spare Julia that same fate, allowing her to linger long enough to make it back through the time portal, though it remains to be seen if time heals all wounds.

John: Why exactly was Barnabas so excited to see the unfamiliar door? At first I thought it was supposed to be the door to Angelique's room, but they ended up in a nondescript hallway. The fact that Carrie seems to be alive on the other side suggests that we may have gone back in time to 1970 (albeit which 1970 remains to be seen...). 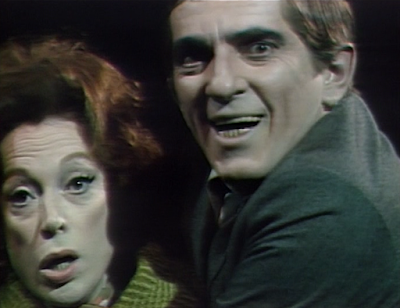 Christine: It is unclear how he knew they were back in 1970 since we didn't get to see any of the familiar landmarks, which made his ecstatic reaction somewhat jarring. If I overextend myself to try and figure it out, I'd have to say the door must have lacked the same deterioration as the rest of the house, leading him to believe they had discovered a way back, or it could be that it was the door to Angelique's room on their side, but that the house in the time they have entered has been altered. 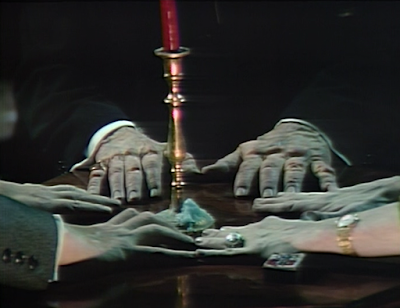