As they return to the cemetery, Julia tells Barnabas she felt the evil in Collinwood. Barnabas says there's some plot to keep them and everyone else from knowing what happened at Collinwood. They enter the mausoleum and see the secret door standing open. Julia whispers that someone knows. Carolyn comes out of the secret room and says she knew they'd come back. 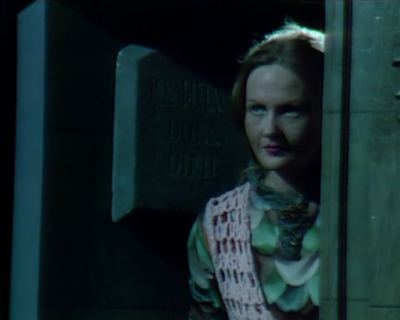 Julia says she wanted to show Barnabas Namoi's tomb. Carolyn asks what the coffin is doing in there, and Julia acts surprised to see that there's a secret room. They all go inside. Barnabas asks who would put a coffin in there. He asks how many secrets the room has. Carolyn says sometimes it's best not to know secrets. Barnabas asks her if she knows any secrets about the coffin. She says the coffin wasn't in the room before. She says she knows why it's there. He asks her why. She says it's waiting for him. He asks why, and she says or it's waiting for Julia. Whoever is the first to die. She tells them to get out and never come back. They leave her. Barnabas tells Julia that Carolyn doesn't know about him. 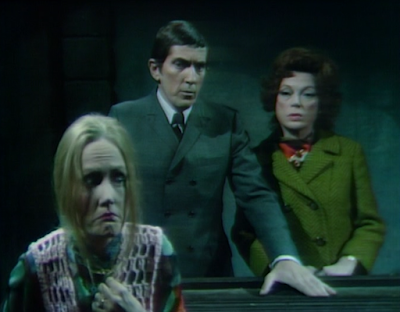 Carolyn closes the secret door, and says that it is for him.

Julia says they don't need anyone investigating them, and that they need to move the coffin tonight. They approach the ruins of Collinwood and see a blue light in the window. Once inside, they see nothing. She says it was their imagination. Barnabas says there's someone in the house. She says it's insane for them to be there without any weapons. He says if he's right about the house, no weapon could help them. She says the papers that were there yesterday are gone, and only one remains. Barnabas picks up a knife, and sees dried blood on it. Julia says it wasn't there yesterday, and he points out the diary is gone, too. They look around, and hear music playing. They follow the sound into the foyer, and it stops. Carolyn eavesdrops on them from outside. 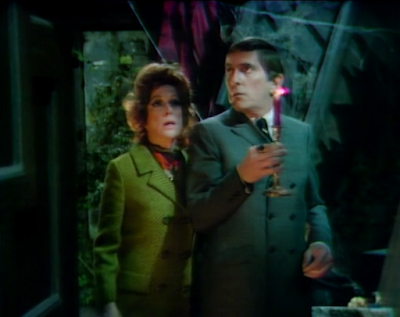 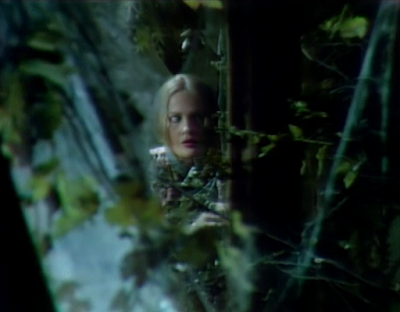 Carolyn visits the sheriff. She tells him that he has to help her.

Barnabas and Julia go into her room upstairs. She finds her clothes in a wardrobe, just as she left them in 1970. She finds a box with her notes has been opened. She says anyone who has looked at them will know his secret. 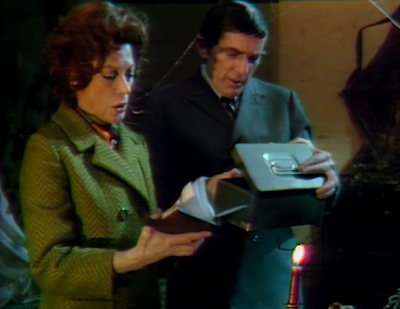 The wind blows out their candle. Barnabas calls for any spirit in the room to show itself. Things are thrown about, and Julia runs out of the room, screaming. 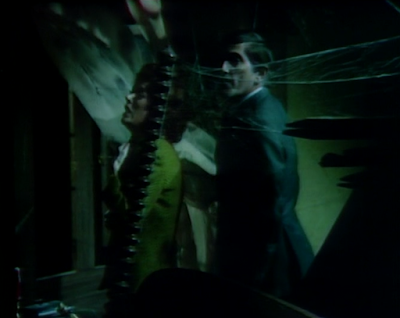 A blue light glows in the drawing room until Barnabas and Julia come downstairs. They leave to go to the old house, and Barnabas says he'll return tonight—even without her. Outside the house, someone asks them what they're doing there. 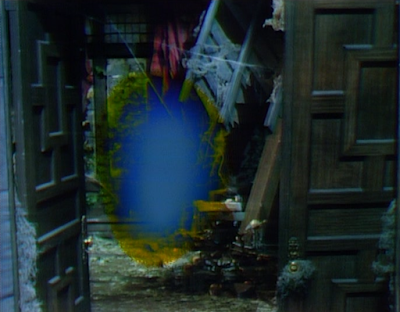 Barnabas asks the sheriff what right he had to bring them in for questioning. He says the owner of Collinwood complained. Barnabas claims he's her cousin. They say they left their ID in Bangor. Barnabas points out that the old house was placed in his name in the late 60s. The sheriff asks them what they were doing yesterday. He says they were visiting the family property. The sheriff says they don't have a car, and he can book them both on vagrancy. Barnabas says he has money, and they can stay at the old house. The sheriff suggests now that they've seen the property they own, they should go. Barnabas says he's interested in restoring the house, and the sheriff says he might start, but he won't finish. He lets them go. 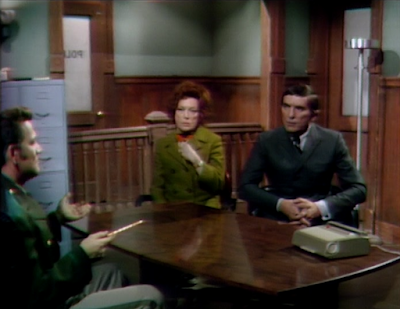 After they leave, the sheriff tells Carolyn he did the best he could. She says she wants to show him something she doesn't understand. 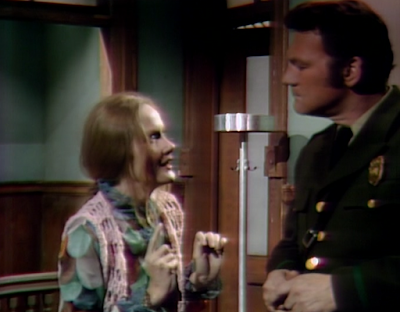 Barnabas and Julia return to Collinwood, and Julia says the sheriff may return. He says it may be their last chance to find out what destroyed Collinwood. The front door swings open, and they hear the music once more. Barnabas leads Julia upstairs. The music fades away, and they hear footsteps. Barnabas calls to them. No one answers. They hear a noise in the drawing room and rush downstairs. 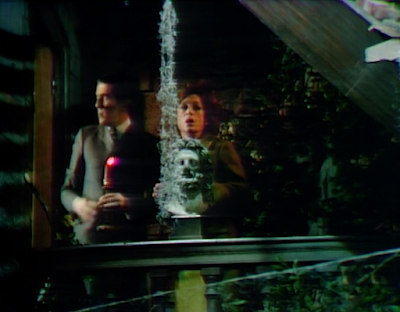 Carolyn shows the sheriff a photo album. It has a photo of Julia dated Spring 1970. He asks what kind of joke she's trying to pull. He says she wouldn't look the same after 25 years. He asks if she has a photo of Barnabas. Carolyn says there are no photos—just a portrait she has which was painted in 1797. 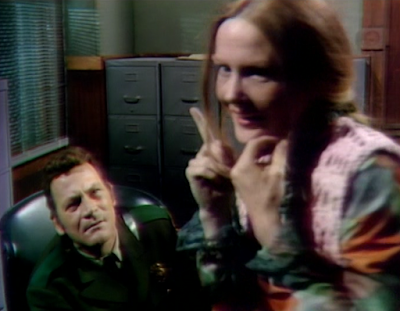 Barnabas says whatever is in the house can materialize and dematerialize at will. They hear the music playing again. Barnabas tells Julia that music is seldom used to frighten someone, so he's going to go upstairs. He tells her to wait in the foyer, and he goes upstairs. Barnabas yells for her to watch out as a bust topples over from the upstairs railing. She runs out of the house and Barnabas follows her. They look back into the house and see a strange man in the window. 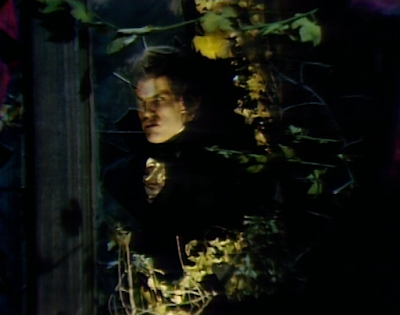 John: They make a big deal out of needing to move Barnabas' coffin, but they never get around to it... without extra helpers like Willie around, they can't just say someone else took care of that. Unless of course they plan on getting out of 1995 before daybreak arrives...

Christine: There was no time to move the coffin because they were too busy repeatedly running up and down the stairs at Collinwood. With the present condition of the house, I'm surprised the whole staircase didn't collapse! It would have been great to hear them try and explain themselves to the Sheriff if he had caught them lugging a coffin around.

John: Another new tune comes along, threatening to be the latest annoying earworm. Though as Barnabas so assuredly states, music is seldom used to frighten someone. I guess he doesn't spend a lot of time listening to Robert Cobert's body of work...

Christine: I seem to remember Quentin's theme giving a few family members a bit of a scare back when his grumpy ghost was lurking around.

John: Interesting introduction to a new character—Gerard—is he alive or dead? Related to someone we know? Or a fresh creation out of the writers bag 'o tricks? I guess we can assume he's somehow responsible for the destruction of Collinwood. I guess we'll find out tomorrow!

Christine: He looks even more surly than the ghost of Quentin did! If he's the source of the blue light and the furniture tossing, I'm guessing he's dead. While the destruction of Collinwood is an interesting turn of events, I can't help feeling disappointed that we haven't had the chance to reconnect with our well known Collins family members from 1970, which seems unlikely to happen any time soon now that Julia and Barnabas have taken on yet another mission to save the Collins family and new characters are being introduced. 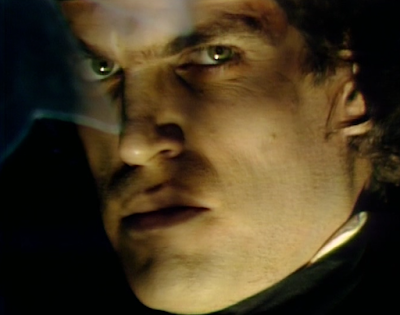 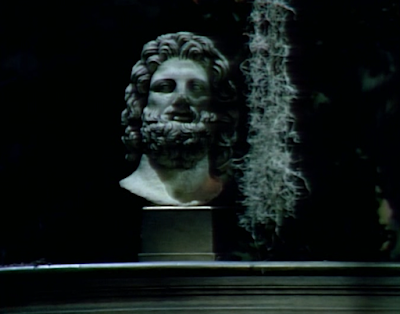