Carolyn pours herself a drink, and tells Roger he'd like to know the things she knows. He tells her that she's drunk. She says that she'll tell him the biggest secret of all. She says it concerns someone he loves very much. She says she can prove that Alexis is really Angelique. 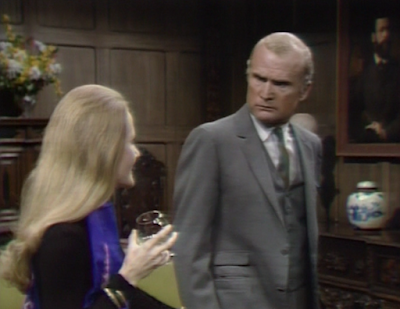 Someone standing outside the drawing room hears her say this.

Roger tells her that's ridiculous, and Carolyn assures him it's true. He tells her to check beneath her skull where the hat pin... She then says she has proof, and he asks what it is. She says that would reveal another secret. He tells her the dead do not come back. Carolyn says Angelique came back for a reason, and everyone in the house should be warned. 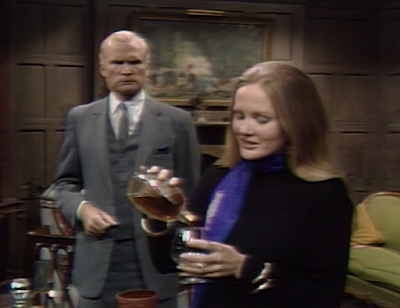 It's Trask eavesdropping on them from the foyer. 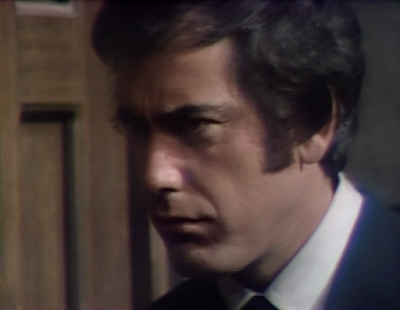 Roger says if she keeps it up, he'll put her in a sanitarium.

Amy sneaks up on Trask, and he tells her to leave him alone. She runs off. 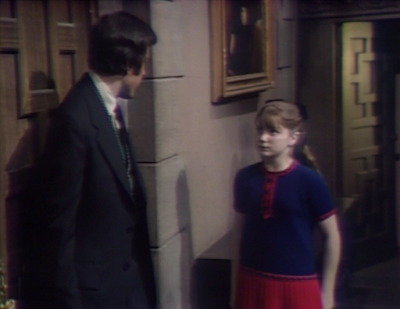 Roger tells Carolyn that anyone who watched Angelique die won't believe her story. Carolyn says that he does. Roger says there's no shred of logic to it. If she came back, she'd want revenge. Carolyn asks if Quentin being on the run from law would be revenge? She asks if he thinks Quentin murdered her, and Roger says he knows he did. 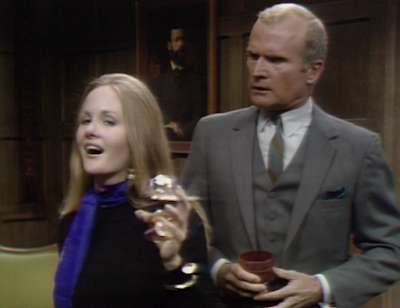 Angelexis walks up on Trask. He seems troubled to see her. She asks what he's looking at, and Trask apologizes before scurrying off. 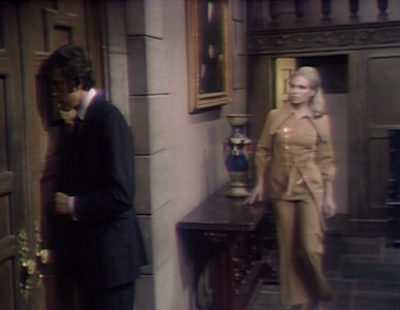 Angelexis walks in on Roger and Carolyn as he explains no one but Quentin would have killed her. When he sees Angelexis, he's in shocked. Carolyn says they were just discussing her sister's murder. Angelexis adds that Trask was quite interested in their conversation, as she found him eavesdropping on their conversation. Roger says he'll have a word with him. Carolyn stops him and asks him to tell his theory about Quentin to Angelexis. She says she finds the subject upsetting. Carolyn tells her that there are even more secrets than they know, and that she knows them all. She puts down her drink and says she's going home. She momentarily sobers up and says she was thinking that Will would be there waiting for her. She leaves to return home. Angelexis asks Roger why he's staring at her. 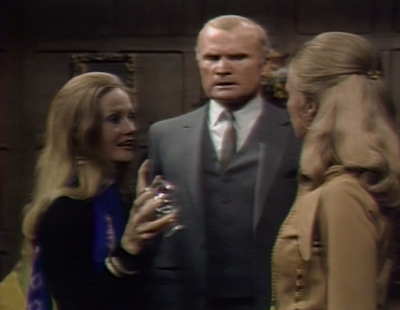 Trask walks in on Carolyn in the old house. He tells her that he heard her in the drawing room. He asks if it's true; if Alexis is truly Angelique. She asks him to pour her a drink. He asks her how he knows. She asks why it interests him so much. She suggests that he was in love with Angelique, too. He says it can't be her. 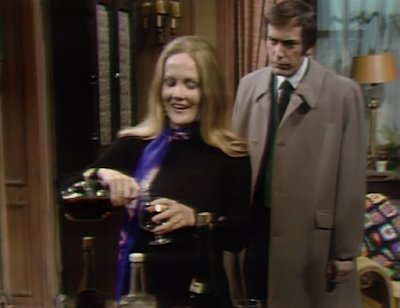 She laughs, mocking him for being afraid of her. He demands that she tell him how she knows. He says she'll regret causing trouble. She asks if he's going to make her regret it, and he leaves. 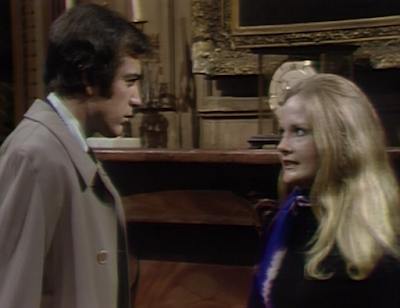 Elizabeth tells Angelexis that she thought she heard Quentin in the hall last night. Angelexis says he wouldn't return to the house. Elizabeth thinks he's spying on them to determine which of them is guilty of Angelique's murder. Angelexis says that his running away from the police makes him the most likely suspect. Elizabeth refuses to believe it. She asks if Angelexis believes Quentin killed Angelique or Bruno. Angelexis waffles. 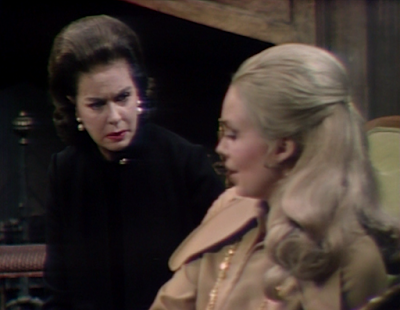 Carolyn walks in on them, drunk. Elizabeth asks Angelexis to let her speak to her daughter alone. She leaves, and Carolyn says that she should have joined Will in his drinking. Carolyn tells her mother that she's relieved about her. She says she was upset when she believed Elizabeth had murdered Angelique. 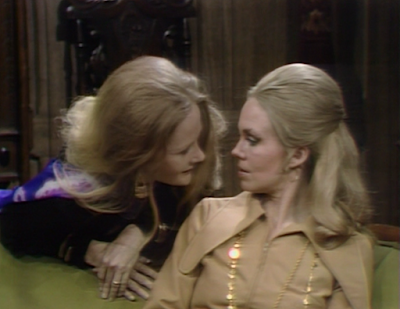 Roger eavesdrops on their conversation.

Carolyn says that she found her hatpin, and she thought she killed Angelique for her and Will. Carolyn says she now knows who killed her. Elizabeth says she must call the police. Carolyn refuses. She says the police will never believe her. She adds that she knows who the murderer is, and tonight, when evening comes, she'll do something about it. Her mother asks her why in the evening, and she says that's another secret. 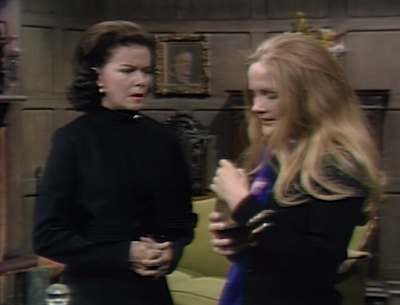 Roger sees a shadow in the foyer, and realizes that he wasn't the only one to hear them. He wonders if it was Trask, or possibly Quentin. 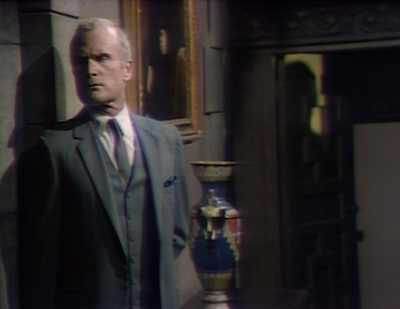 In the kitchen, Trask begins to sharpen butcher knife. Amy walks in and asks if he's still mad at her. He apologizes. She asks him to promise to believe her, and then says she heard the footsteps of the man who lives in the Tower room. He asks if she's seen the man, and she say she's afraid. He asks why she hasn't told anyone else, and she says then they wouldn't believe her, and they'd also be afraid. He tells her that he'll see who it is. 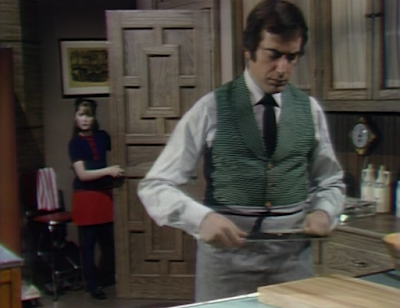 Elizabeth tells Roger that Carolyn is making no sense at all. He says he thinks she should be hospitalized immediately. She refuses. He says she always asks his opinion, but never takes his advice, and storms off. 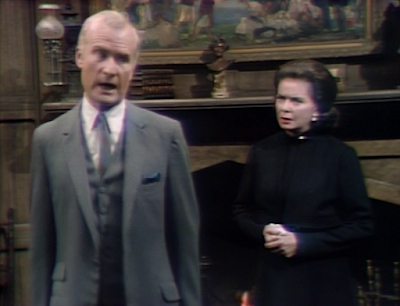 Trask goes to the tower room. As he's about to open the door, Carolyn yells at him to stop snooping around, and to go downstairs. She says she's going to be with the spirit of her husband. Trask reluctantly leaves. 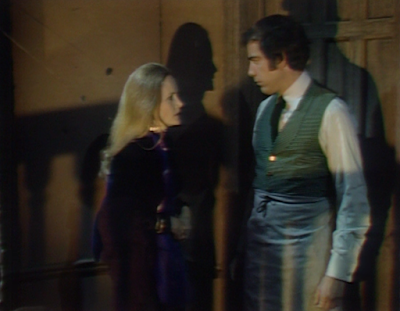 Elizabeth looks for Trask in the kitchen. Amy tells her she saw him an hour ago, coming down the stairs. Elizabeth then asks where Carolyn is. Amy notices the knife Trask was sharpening is gone. Elizabeth says he probably put it away. 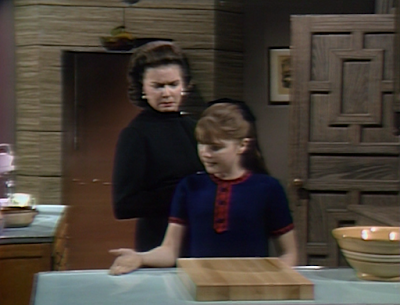 Carolyn tries to reach to Will. She hears a door open and footsteps. She says she's not afraid. She asks why he killed her. An unseen figure raises the butcher knife, and Carolyn screams. 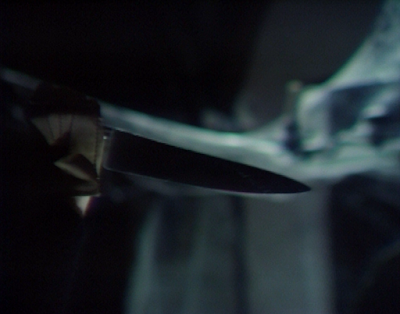 John: I love that parallel-time Roger, like our own, is basically lorded over by his sister. And he's right—in all timelines, Elizabeth often asks him for his opinion, seemingly just so she can purposefully ignore it.

Christine: Well, it could be because his advice is not worth following in either timeline.

John: Should we start tracking the taxidermied pig? He seems to keep turning up in strange new places. 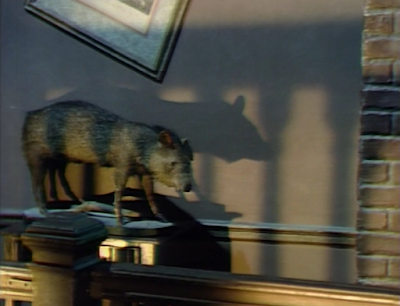 Christine: It is an odd place to keep a stuffed pig. The only other place I remember seeing it was at the Leviathan antique shop, though we definitely should keep an eye out for this macabre specimen. It may be a harbinger of death.


John: Based on Carolyn's asking the unseen man, "why he killed her," are we to assume that Quentin is about to go all Norman Bates on her? I was really hoping her visit might lead to the introduction of the ghost of Will...

Christine: I don't think Quentin is the knife wielder. Since they showed Trask sharpening the knife, he is probably not the killer either. That leaves Roger, who may have been insisting on having Carolyn hospitalized and declared mentally unfit so nobody would believe her ranting about who murdered Angelique. Since he was acting obviously nervous whenever anyone brought up the murder, I'm not convinced it's him either. Let's hope we'll get a reveal tomorrow! Incidentally, is this the first time we've seen the kitchen in color? 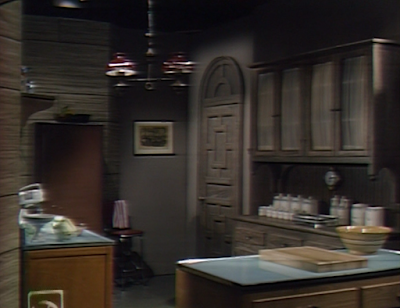 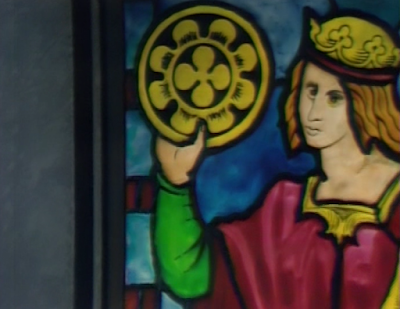