The phone rings at the old house, and it's Julia calling to tell Barnabas that she and Quentin will be at least another hour. She says Maggie will be back sooner. Barnabas tells Roxanne that Maggie is coming back and he'll wait for her, and then deal with Stokes. 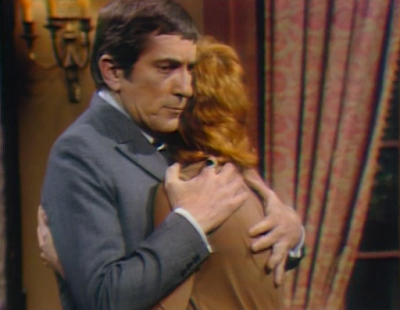 Maggie is in the woods when Stokes grabs her from behind, covering her mouth so she can't scream. He tells her soon there will be no second Mrs. Collins. She struggles, and he threatens her if she screams. He asks where Quentin is, and she says he's with the police. He then asks if Angelique has been cremated yet, and Maggie doesn't understand what he's saying. 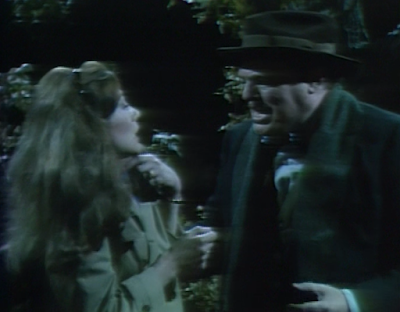 Barnabas looks over Roxanne, draped across a love seat, asleep. 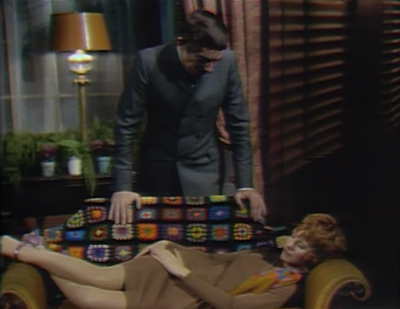 She dreams of Barnabas telling her of another time that he will take her too. She turns around and finds that he's gone. She goes looking for him, calling his name. She comes to the door to Angelique's room, and she sees Barnabas inside, standing in fire, reaching out for her. She wakes. He asks her what's the matter. She says she dreamed he was trapped inside a burning room. 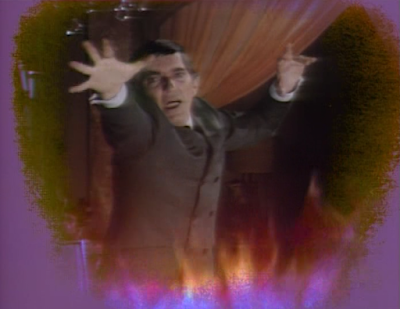 Maggie tells Stokes that he's insane. She asks what he's going to do with her. He tells her that her husband will pay the piper with his life tonight. 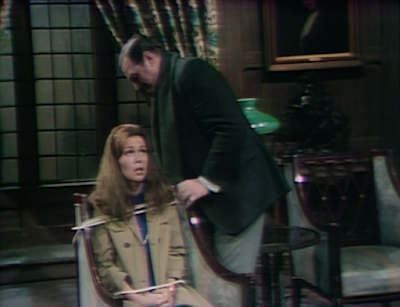 Barnabas asks Roxanne what she's thinking about. She says she can't help thinking about her dream. She asks him about the other time, and he assures her that he'll take her there. He explains how time bands work, and how counterparts may be completely different—like Stokes, for example. He suddenly realizes that Maggie should have arrived by now, and leaves to go looking for her. 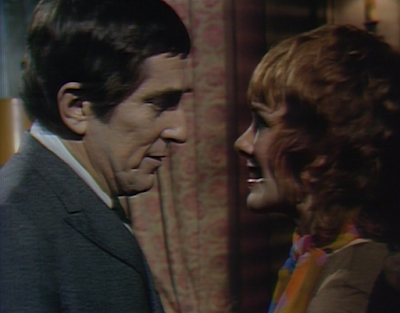 Quentin and Julia arrive at the old house. Julia introduces Quentin to Roxanne. She asks about Barnabas and Maggie, and Roxanne explains that Maggie never showed up, so Barnabas went looking for her. Quentin is concerned. The phone rings, and Quentin answers it. Stokes says he wasn't expecting him to answer. Stokes extends an invitation to Quentin, telling him that he has Maggie, and he won't harm her until Quentin arrives alone and unarmed. Quentin agrees. Julia tells Quentin that Barnabas will be back soon, and she asks him to wait. Quentin says Stokes told him to come alone, and that's what he's doing. 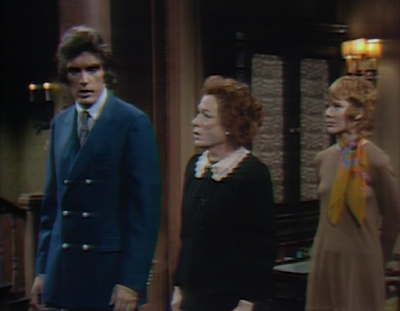 At Collinwood, Stokes plays with a revolver. Maggie asks if he's going to kill Quentin. Stokes tells her that today there score will be settled. She hears the door and yells for Quentin not to come in. He rushes right past Stokes holding the gun and runs to Maggie. Quentin tells Stokes to let Maggie go. Stokes asks if Angelique's body had been cremated yet, and Quentin confirms that it had. Stokes says he'll finish what Angelique started. Maggie tells Quentin that Stokes is going to kill him. Stokes tells Quentin that he has nothing to gain but the satisfaction of seeing him dead. The doors swing open, and Quentin karate-chops the gun out of Stokes' hand. Barnabas appears with Roxanne, and Stokes tells him that he knows what he is. He grabs Roxanne and threatens to break her neck. He then backs out of the room and locks the door. Barnabas tells Quentin to take care of Maggie, and goes upstairs for Stokes and Roxanne. Stokes sneaks out of the kitchen with Roxanne and a gasoline can, and leads her into the drawing room. 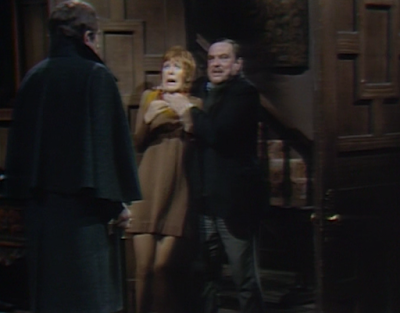 Julia is in the woods when Barnabas appears. He asks about Quentin and Maggie, and she says they're at the old house. He tells her that Stokes is out of his mind.

Stokes tells Roxanne that they'll all be coming back soon, and he has a surprise in store for them. He keeps his hand over her mouth.

Barnabas tells Julia that they'll begin with the West Wing.

In the drawing room, with one hand over Roxanne's mouth, Stokes begins to pour gasoline everywhere. Roxanne ultimately runs off and Stokes' sets the house on fire. 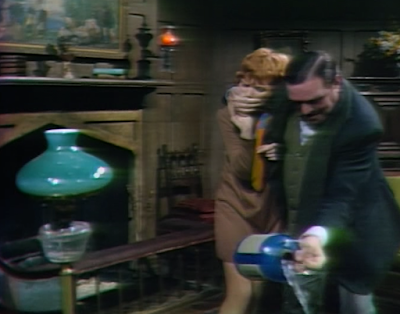 He does the same in the foyer, laughing like a madman. He sees Roxanne at the top of the stairs, and assures her that no one will leave the house alive. 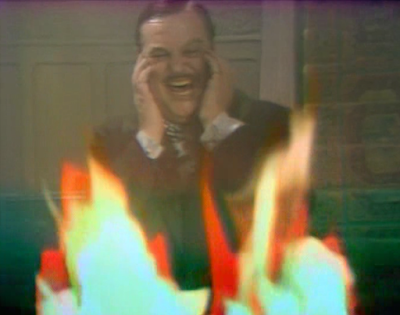 Barnabas tells Julia that if he could find him, he would deal with Stokes, and bring she and Roxanne back to Angelique's room waiting for it to change. They notice that the house is on fire. Julia says the fire must have been started by Stokes. Julia asks how they can get out. Barnabas hears Roxanne calling him, and tries to reach her, unsuccessfully. He screams her name. Suddenly, Julia and Barnabas are back in our time band. 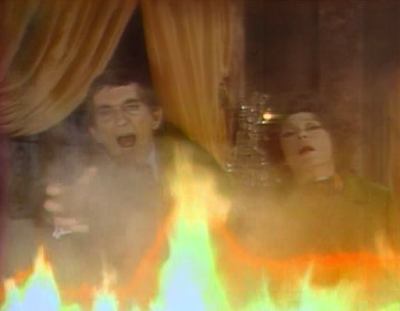 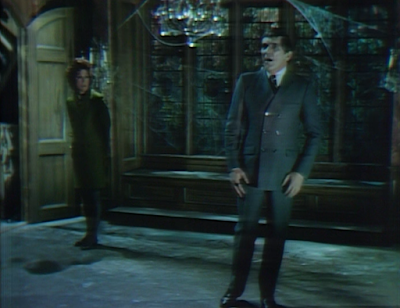 John: And with that, roll credits—THE END. Is the burning wreckage that is parallel time finally behind us?

Christine: Anything can happen on this show, so we can't be too certain.

John: Nothing cleanses like fire, so let's hope the fire burning through Collinwood will finally rid us of the dead overgrowth that was parallel-time.

Christine: I think the biggest problem with parallel time is that we stayed too long there, just as we did in 1897. Well, that and Barnabas finding another girlfriend.

John: Anyone else waiting for Barnabas to start singing "Roxanne" by The Police at the end of today's episode?