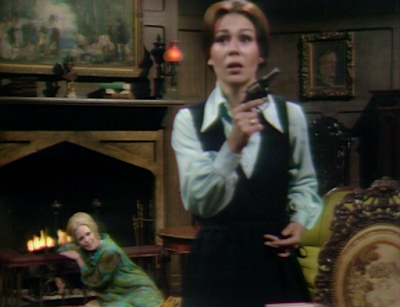 Claude tells Roxanne to speak to him. Her lips start to move.

Barnabas tells Angelique that North is going to make Roxanne speak. He says that before she goes, she'll sign a confession clearing Quentin, and she's going to tell him where Julia is.

Maggie stands waiting with the gun in Angelique's room.

Barnabas begs Angelique to sign the confession. She says she came to destroy Quentin, not save him. He says it will give her peace, and she says she doesn't want peace. Barnabas says she only has minutes... or seconds... She says the same is true for Quentin. 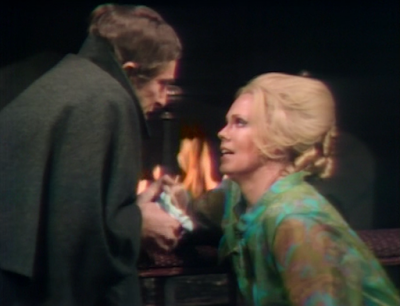 Quentin walks in the door to Angelique's room, where he finds Maggie inside pointing a gun at him. He tells her no. 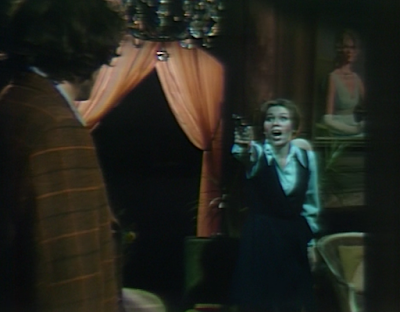 Claude tells Roxanne she will speak, and she says, "I can speak." 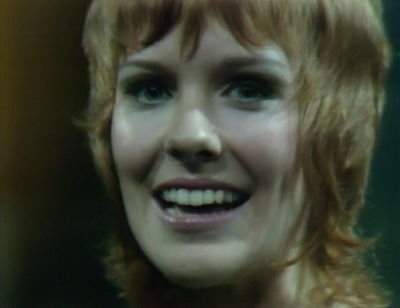 Angelique screams and falls to the ground.

Maggie screams and falls to the ground.

Barnabas checks Angelique for a pulse. He leaves her dead body on the floor of the drawing room and goes to the foyer to call Inspector Hamilton and tell him Alexis is dead. 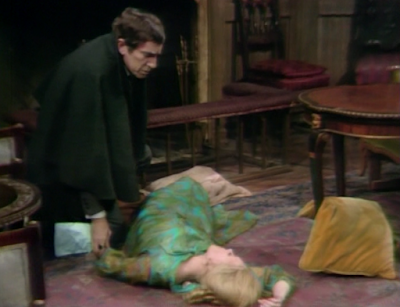 He hangs up and Quentin repeats that Alexis is dead from the top of the stairs. Barnabas tells him to come down so he can hear the whole story. Quentin does, and says that Maggie is responsible. Barnabas says he's wrong. Quentin says she just tried to kill him. He says she was in Angelique's room pointing a gun at him, and Barnabas adds that at the last minute, she fell to the floor unconscious. Quentin asks how he knew. Barnabas says that was Angelique's last act. He says Maggie was under Angelique's spell. He leads Quentin into the the drawing room. He tells Quentin that the body is not Alexis, but Angelique. 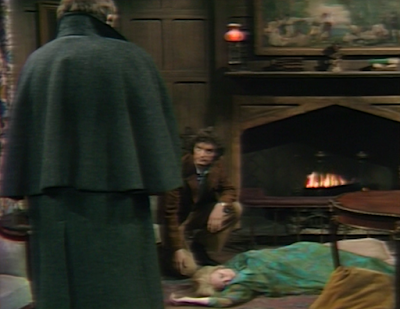 Quentin asks how someone can bring the dead back to life. Barnabas says Angelique's father brought her back with the life force of a woman named Roxanne. Quentin says he saw Angelique's body. Barnabas reminds him that it was perfectly preserved. Quentin adds that he burned it, and Barnabas explains that he did so after she changed places with Alexis. Quentin asks if he destroyed Alexis, and Barnabas confirms it. Barnabas says Angelique killed Bruno as well, but refused to sign a confession. Quentin says he has no way of proving he didn't kill Bruno. Barnabas says they can prove it if they find Julia. He sends Quentin upstairs to tend to Maggie, while he waits for the inspector. 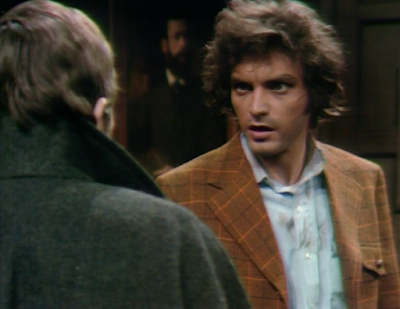 The inspector asks Barnabas what caused Angelique's death. Barnabas tells him to sit down, and he'll tell him the whole story. 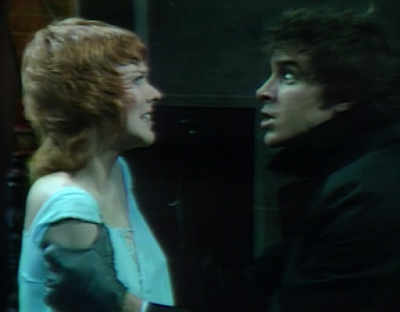 Barnabas tells the inspector that North got Roxanne to speak. The inspector then follows saying that then Angelique suddenly died. He tells Barnabas the story is preposterous. Barnabas says that it's true. The inspector says the search for Quentin will go on. Barnabas offers to take him to see Roxanne and question her. He says he's going to call the station first. Angelique's dead body remains on the floor. 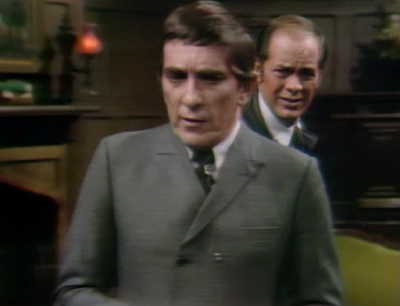 Claude leads Roxanne through the woods. They hide in the shadows as Barnabas and the inspector pass.

Barnabas leads the inspector downstairs into the lab in the basement. It's empty. He asks where the woman is. Barnabas says he must have taken her away. He asks why he would lie, or have all of the equipment. The inspector says he's sticking with reality, which still appears to be the guilt of Quentin. 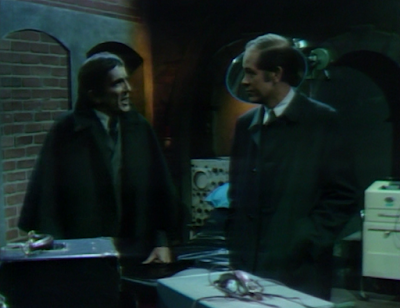 Quentin sits with Maggie. She slowly comes to, and he tells her not to be frightened. She tells him she knows the truth, and they hug one another. She says she thought he killed Angelique until she found out that Roger had killed her. And Carolyn. And Elizabeth. Quentin is shocked. He says Roger must have been insane. She says the police won't blame him. He says there's still Bruno. She promises him that they'll find a way to prove his innocence. They profess their love for one another and kiss. 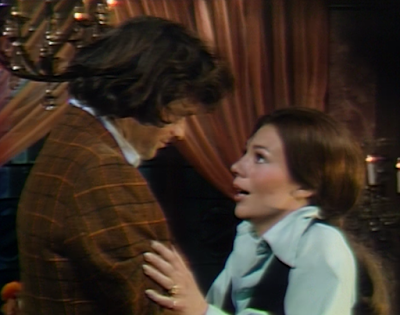 She says she can accept things now that she couldn't before. She says she wanted to emulate his first wife, and she knows he'll love another like he loved her. He tells Maggie that he hated Angelique. He said they never had a happy day. He says she was unfaithful, and fond of bragging about it. He wanted to be free of her, and she promised him that he never would be. He says he wasn't sure if he killed her of not on the night of the seance—but he was glad she was dead. When he met Maggie, she was everything he ever wanted in a woman. She tells him that they'll start again. 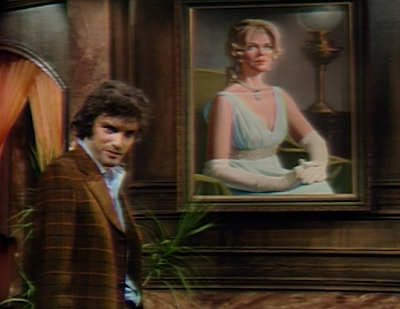 The inspector walks in on them, and tells him he's taking him into custody, and he won't escape this time. 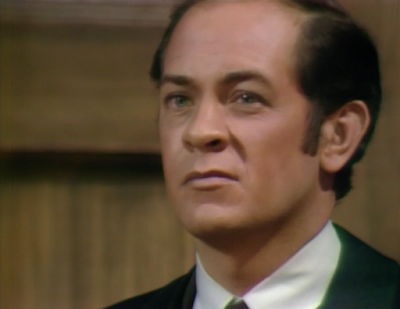 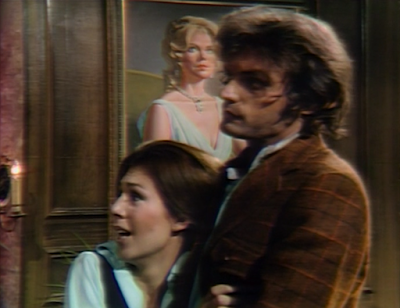 Barnabas tells Maggie that he hasn't found Julia anywhere. Maggie asks if she might be dead. He says he thinks she's still alive, it's just a question of where. She asks about Roxanne, and he says he's going to check Stokes house. He says they have to find a way to clear Quentin. Maggie thanks him for everything.

Barnabas searches the woods and finds Claude North dead, stabbed with his own dagger. He wonders if Roxanne is dead, too. 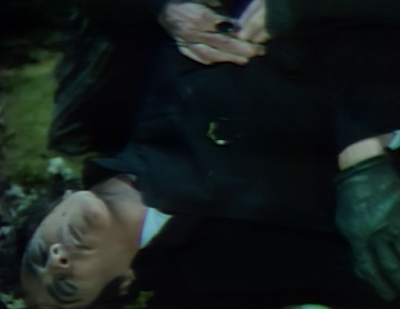 John: Well, it didn't take a mind reader to figure out that Angelique's death would likely end the spell on Maggie. Though I didn't quite expect Barnabas to tell the inspector the truth, the whole truth, and nothing but the truth. Do you think he tried to explain parallel time to him, too? I'm surprised the inspector didn't lock Barnabas up as well! Do you think anyone knows that Roger is dead, too?

Christine: That's a good question. Maggie and Quentin should have been tripping over Roger's corpse in Angelique's room. She didn't seem well enough to move his body. Perhaps the room changed and transported his corpse to the other time band.

John: So about this whole Claude/Roxanne McGuffin... I was really hoping we'd get an answer to why she would even consider going back to the man who sold her out to someone for her life force. It sure seems like an odd thing to do with a woman you claim to love. Of course, is that any less ridiculous than her falling in love with Barnabas? I guess not.

Christine: This is too much! Well, since we don't have many characters left alive in parallel time, I'm guessing Stokes is the one responsible for planting the dagger in North's back, and he now has Roxanne, who's been wearing the same blue nightgown for who knows how long. Perhaps he's going to attempt to resurrect Angelique.

John: It's certainly worth noting that Barnabas chose to look for Roxanne rather than continue the search for Julia... the one who could more likely help Quentin. If that's not the ultimate slap in the face, I don't know what is. Something tells me that once reunited, Julia will still be pining for her vampire beau.

Christine: I really hate when the writers make Barnabas act like such an idiot. Julia's a goner.
Posted by John Scoleri at 5:01 PM