Barnabas leads Julia up a flight of stairs. He helps her along as she gasps. He sees a door, and they step through it. 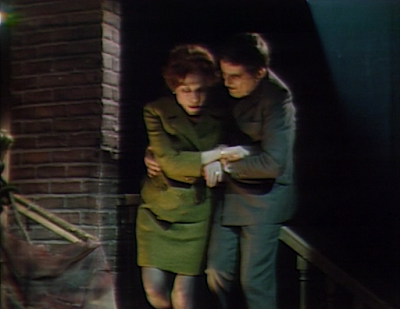 On the other side, a girl asks them who they are. Assuming it's Carrie, who helped them escape from Gerard, Barnabas thanks her for helping them. She doesn't understand. She asks them what they're doing there. Julia points out she's wearing a different dress, and Barnabas realizes that she can't be the same girl from the playroom. The girl says she's going to tell Mrs. Stoddard. Barnabas introduces himself and Julia to her. She says she's heard of them. He asks Julia if it's possible they traveled through time. Julia asks the girl what year it is, and she says it's 1970. Julia tells him that they're back. Barnabas doesn't understand, but says that at least they can try to prevent what will happen. The girl introduces herself as Hallie Stokes, Professor Stokes niece. She says Mrs. Stoddard invited her to stay in Collinwood after her parents were killed in an accident. Barnabas asks her to take them to Roger and Elizabeth. She says Roger is in Europe, but Elizabeth is downstairs. 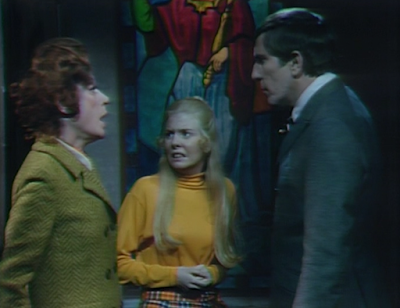 Quentin goes into the drawing room to see Elizabeth, closing the doors behind him. He tells her he was in the East Wing and he saw the room change while he stood in the doorway. He says the room was on fire, and there was a girl calling for Barnabas. She asks if he thinks Julia and Barnabas were trapped in the fire. He says it's the only conclusion he can come to, and it true, they'll never see them again. Barnabas swings the door open and announces to them that he and Julia have returned. 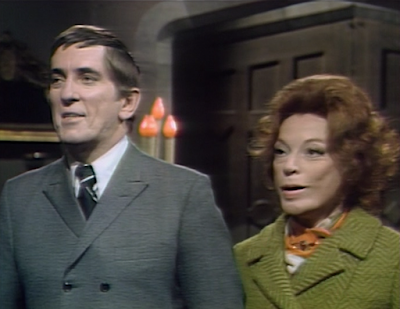 Barnabas finishes telling their story to Quentin and Elizabeth. Quentin describes seeing the room on fire just before they arrived. Barnabas says the fire was over a week ago. Quentin asks him if that's true, where they've been for the past week. They point out that they spent a week in 1995. The house was in ruins, and they have to prevent whatever caused it. Julia says the found Mrs. Johnson putting flowers on David's grave, as he died in 1970. Elizabeth says they must have imagined this. Barnabas says they don't have much time to prevent the disaster. Quentin asks what's going to happen, and he admits that he doesn't know. Quentin asks who else they saw in the future. Barnabas says Carolyn, Stokes, and Quentin. Julia adds that Quentin had been institutionalized, and Carolyn blocked her memories of what happened. Barnabas points out that Carolyn died of fright in the drawing room. 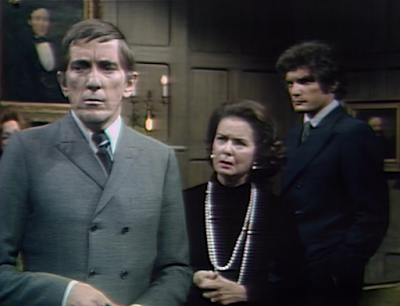 Elizabeth has trouble believing it happened. Quentin asks if it's possible they're hallucinating. Julia points out that there were six events leading to the catastrophe, and says they have clues to them. Quentin asks if she knows the date of the fire, and Julia says it was August 3rd. Quentin says today's date is August 3rd. He says a single night hasn't passed. Barnabas says their experience was real, and they have to do something about it. Hallie eavesdrops on them from the foyer. 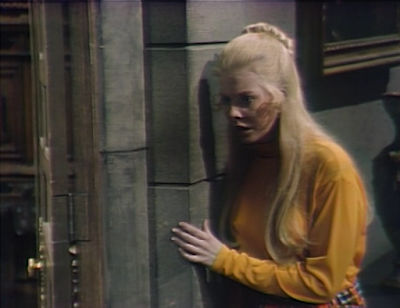 Barnabas flips through the Collins family album, but can't find any names they heard. Julia brings him more volumes. He asks if she thinks it was wise to tell Quentin and Elizabeth anything. Julia tells him she can almost still feel the presence of evil. Barnabas finds a reference to Daphne. He says she was a Collins' governess in 1840. They head off to the cemetery to find her grave. 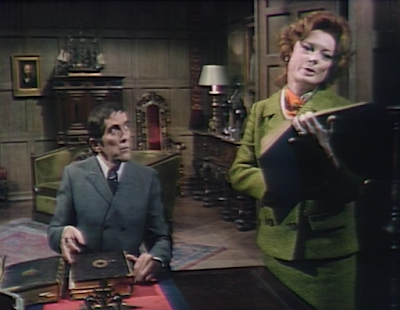 Hallie comes to see Quentin. She says she's having strange feelings about Barnabas and Julia. She asks if they're good people. He asks what she thinks, and she says she was initially frightened by them when she met them in the West Wing. Quentin is surprised to hear that. She says they spoke as if they had seen her before. She says she now has an awful feeling that something terrible is going to happen. Quentin says that they're fine people, and then asks what she was doing in the West Wing. She tells him she has no idea what drew her to the West Wing. 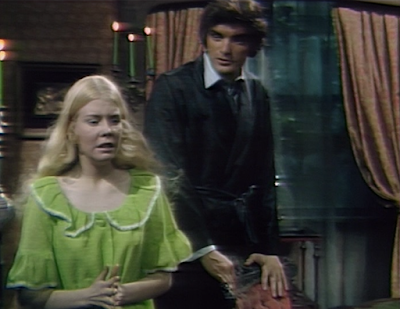 Barnabas and Julia stand over Daphne's grave. He says she was 23 years old, and Julia says it wasn't a natural death, because her spirit is not at rest. Julia turns and points out that Gerard Stiles' grave is right next to hers, with the inscription, IN DARKNESS HE DID LIVE AND DIE. 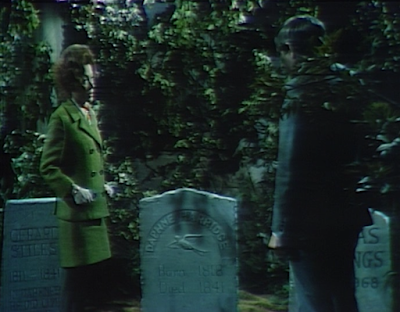 Barnabas comes to see Quentin. Quentin tells Barnabas that he left out some of the details of his story. Barnabas points out that there were several things left out, including the fact that Quentin hadn't aged. Quentin says they should have returned from parallel time through the East Wing, but Hallie says she found them in the West Wing. Barnabas can't explain it. Quentin says he doesn't want Hallie to know any more about what they've experienced. Barnabas says they were in the children's playroom in the West Wing in parallel time, and that room led them to the West Wing corridor in parallel time. He says they found the ghost of Hallie who guided them to a door which allowed them to escape. Quentin says the room doesn't exist, and Barnabas tells him he'll prove that it does, and asks Quentin to follow him. 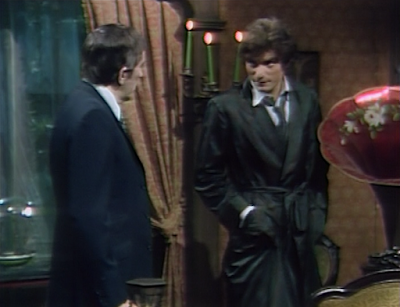 Julia asks Hallie if she has enjoyed her stay in Collinwood. She says she has. Julia asks her if the house has changed much, and Hallie says it hasn't. Julia asks if she has ever heard of Rose Cottage, and after saying she hasn't, she explains that it's time for her to go to bed. 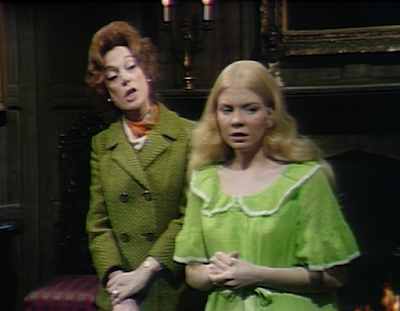 Barnabas points out the door leading to the playroom. Quentin opens it and the two step inside. Barnabas is shocked to find himself in a closet. Quentin says it's not conceivable that there was a playroom there, because the other wall is the outside of the house. 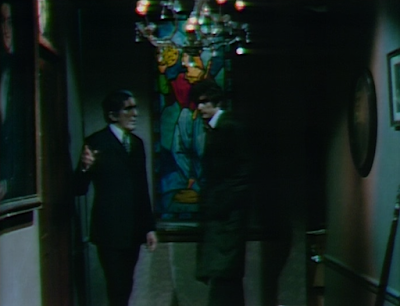 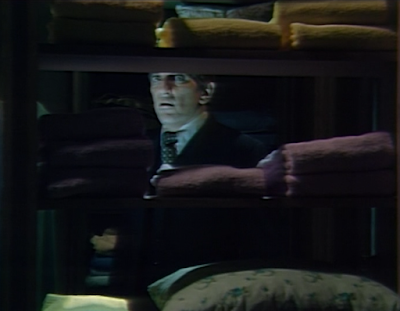 A carousel spins inside the playroom in some other time band... 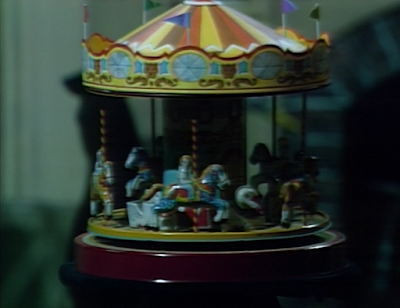 John: Hallie Stokes is a little too comfortable with strangers suddenly appearing in the halls of Collinwood. If that weren't bad enough, you'd think their talking about time travel might send a young girl running for safety. Of course, she didn't even bother to accompany them downstairs to tell the mistress of Collinwood what happened. While I can almost accept all of that, I do have one lingering question. Weren't we sure that she was Carrie? 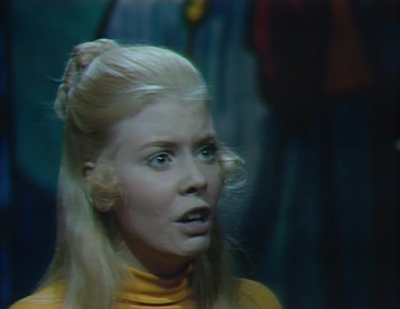 Christine: She didn't appear to be too comfortable with them. Yes, she was Carrie, but don't forget that David was also being called Tad, so make of that what you will.

John: It was a bit too theatrical for Barnabas to make such a grand entrance in the drawing room right after Quentin announced the unlikelihood of their ever seeing Barnabas and Julia again. No surprise that they immediately launched into the full details of everything they experienced ... but why would they just blurt out that David dies in 1970? Might that be considered unsettling to their cousins? Apparently not, but you might have assumed such news would upset them. 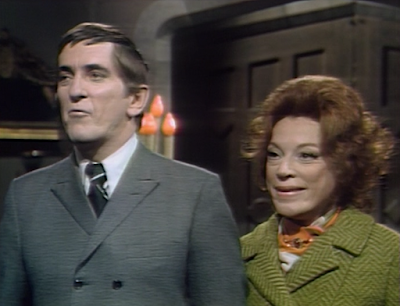 Christine: It was theatrical, yet still enjoyable to sense their happiness at seeing the Collins family members they haven't seen in over 90 episodes! It may not have been sensitive to blurt out all their misadventures, but full disclosure is probably best to enlist their help in preventing the destruction of Collinwood. Based on the return of all the drawing room portraits to their rightful places, it would seem that destruction is not imminent, but as soon as Abigail's portrait gets moved to Naomi's spot by the telephone, they should be wary. It was interesting to see that the portrait that hangs outside the playroom in the future hangs there now, even though it currently appears to be a room to store linens. 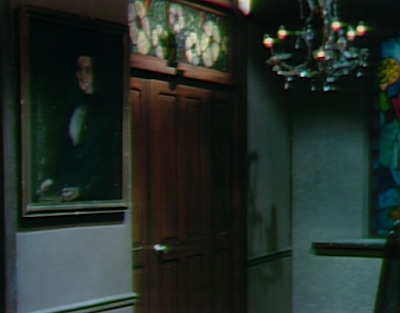 John: I do find it amusing that while everyone is perfectly comfortable with the topic of time travel, they have issues with the thought that someone might have spent a week 25 years in the future, and then returned on the same date they left a different parallel time. Sure, those two versions of Collinwood were running in parallel, but the future is — duh — in the future?

Christine: I really thought we might hear Quentin's theme again with the reappearance of his flowery Victrola. Did he really set himself back up in his old dusty room in the closed off section of the house where David and Amy discovered what they thought was his skeleton (that actually turned out to be Gregory Trask's skeleton) in Episode 645? How long before the ghosts du jour of Daphne and Gerard make an appearance? Will the carousel be the vehicle that leads to their return? 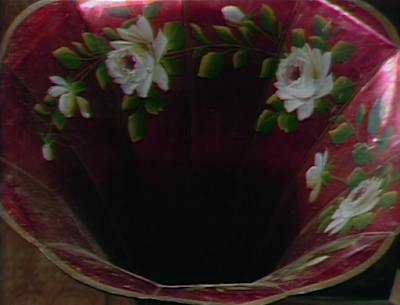 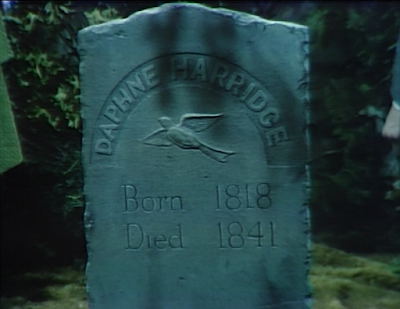 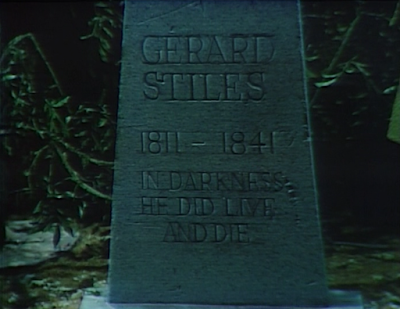