Roxanne opens the basement door and sees a man standing by the front door. He extends his arms to her and she reaches out to embrace him. 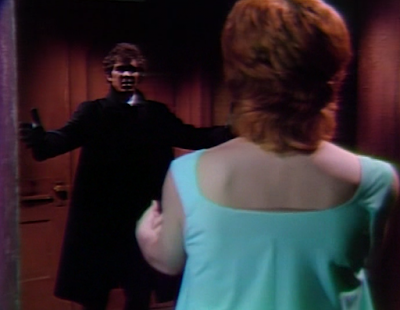 The young man tells her that she knew he would find her again, and he was foolish to let her go. She doesn't speak. He asks her what's wrong, and realizes she's unable to speak. He wonders what Stokes has done to her, why he brought her to this house, and where he is. 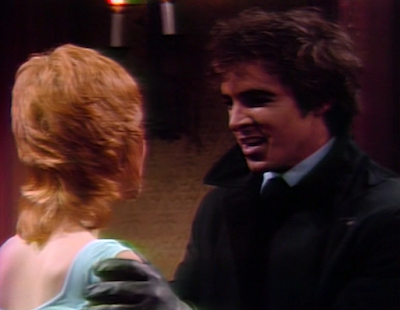 He tells her to look at him, and tells her that he is Claude North. He brandishes his dagger and says surely she remembers it. She runs her hand across the blade. North says she remembers it, but it no longer has the effect on it that it once had. He tells her he will find a way to undo what Stokes has done. 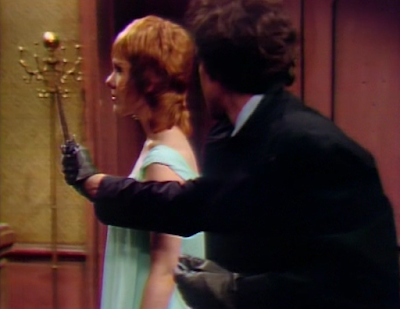 At Collinwood, Barnabas tells the inspector over the phone that Elizabeth has been sedated, and he will have her call him. Maggie comes downstairs, and says she needs to call Stokes because Alexis has had another seizure. He says he has to attend to something at the Loomis house, but he'll be back. 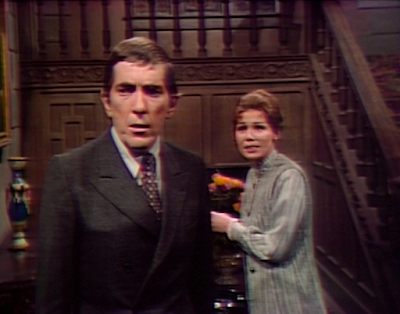 North tells Roxanne to keep looking into his eyes, and come back to him. He's frustrated that it's not working. He says he'd kill Stokes with his bare hands if he were there. He says he's taking her, and he'll return Stokes money if he has to. He hears the door, and says he must hide. He tells her not to reveal his presence. He steps into another room as Barnabas enters and finds Roxanne. Barnabas finds the dagger on the desk, and asks Roxanne if she's seen Claude North. He asks her where he went, but she remains speechless. He takes her downstairs into the basement and locks the door. 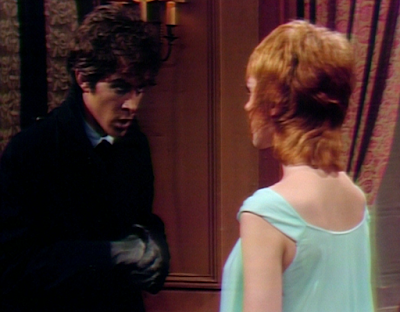 Upstairs, North comes out of hiding and tries the basement door. He pledges to come back for Roxanne. He grabs his dagger and leaves. 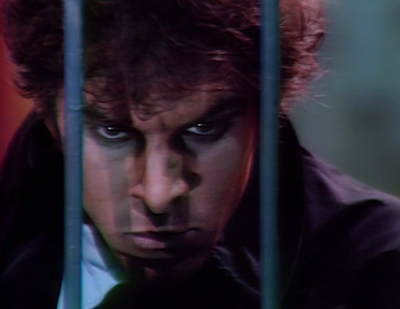 Barnabas comes back upstairs and locks the cellar door. He notices the dagger is missing, realizing that North had been there. He calls Buffie and asks her to do him a favor. He says he's bringing her a woman he needs her to protect.

Maggie lies on her bed reading when she hears footsteps in the hall. She looks outside, and asks if it's Barnabas. When there's no reply, she returns to her room. She hears the footsteps again and listens at the door. She asks whose there. She asks if it's Quentin, and swings the door open again. She goes out to investigate. 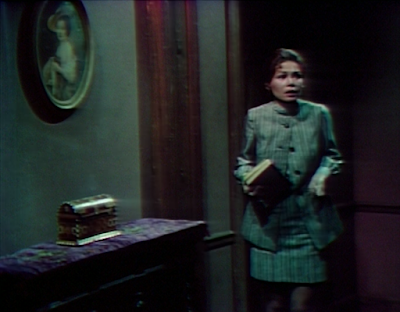 North returns to the old house and manages to pick the lock to the basement door. He goes downstairs and finds the empty laboratory. He hears a voice upstairs, calling for Barnabas.

Maggie looks around for Barnabas. North puts his hand on her shoulder and she screams. She asks who he is, and what he's doing there. He says he has no intention of hurting her. He tells her to look into his eyes. He asks who Barnabas is, and she says he's a friend who lives there. He asks where he has taken her, and she asks who he's referring to. 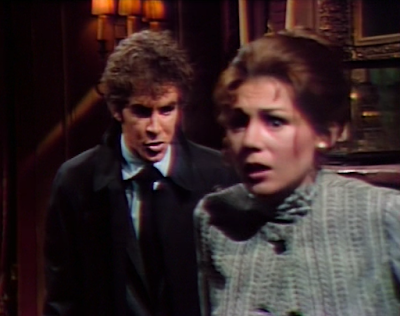 He commands he to look into his eyes. He realizes that she doesn't know what he's referring to. He tells her to tell Barnabas that he'll be back. She asks him who he is, and he tells her that Barnabas will know, and just to give him the message. 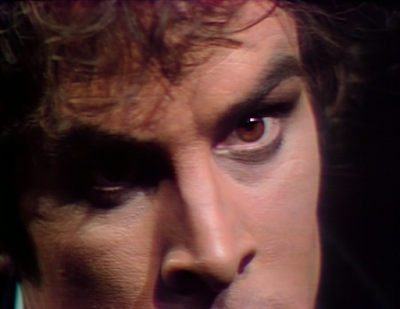 Barnabas comes downstairs at Collinwood when Maggie rushes in. She says she was at the old house looking for him. She says she found a man with frightening eyes that she had never seen before. Barnabas asks if he harmed her, and she says he just had questions about him. She says he wouldn't tell him anything about himself. He said he wanted to know where he had taken her, and that he would be coming back. She asks if he knows who the man is. 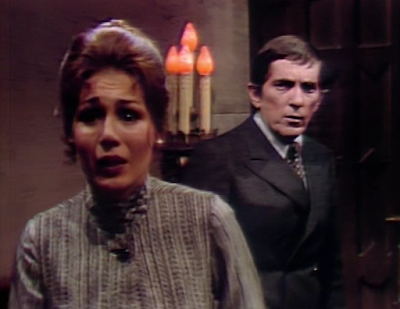 Barnabas asks her why she left the house. She says she heard strange sounds, and she's going to leave after tonight. She says there's a murderer in the house. Barnabas assures her that he's innocent. Maggie says that she knows Quentin loved Angelique, and she also knows how jealous he could get. She says it's possible that he killed her. She says she wants to believe that he's innocent, but if he is, then who killed Bruno, who disposed of Angelique's body, and why did he escape from the police? And where is he now? She's convinced he's in the house, and if he is mad, as Roger says he is, it's possible he may intend to kill the rest of them, too. Upstairs, Quentin stands in the shadows, listening. 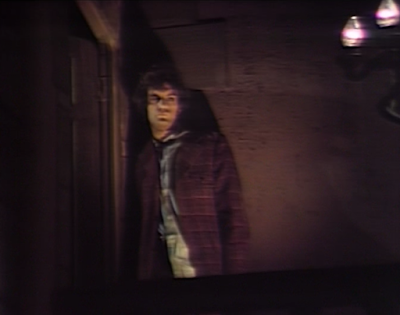 Barnabas tells Roxanne that she holds the key to so much. He says they must restore her, both for Quentin's sake, and because he wants to know her as she really is. 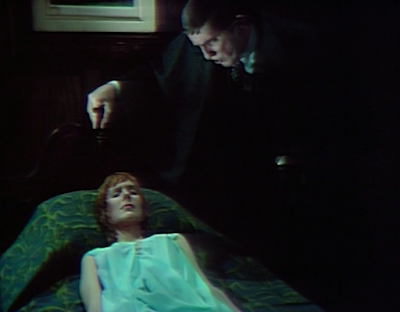 Maggie dreams of Quentin returning to Collinwood. He calls to her, chipper and whistling like a fool. She comes downstairs and they have a pleasant conversation. He tells her that he's neglected her long enough, and he's taking the next six months to travel around the world with her. She's shocked. He says they're leaving tomorrow. He asks her what's the matter, and she says she's just overwhelmed. 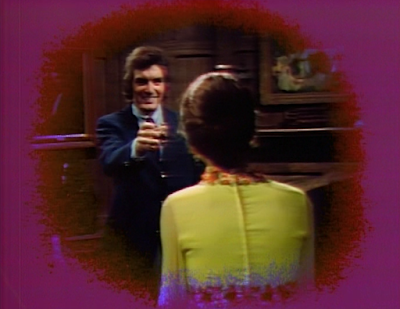 He finds some flowers and asks her where they came from. His tone shifts to jealousy. He tells her they're the same flowers Bruno sent to Angelique, and he says they're forbidden in the house. She says she doesn't know where they came from, and he accuses her of seeing Bruno behind his back. 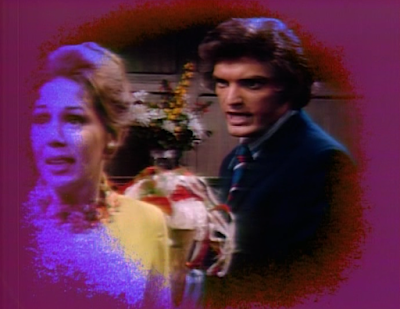 He tells her that she has behaved strangely since he entered the house. He says Bruno is why she doesn't want to travel the world with him. He asks how long it has been going on, and grabs her arms. He says he should have known better as his hands move to her throat. She wakes up with Quentin leaning over her, his hands on her shoulders. 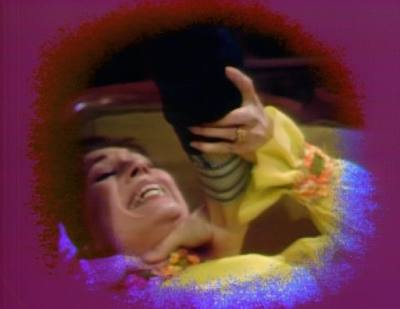 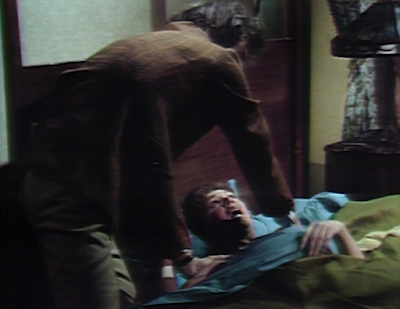 John: A new face in Collinsport! So what kind of creature do you suppose this Claude North is? To me, he comes across as just one more in a long line of pretty-boys brought in to keep the housewives watching—aka, the worst kind of creature. 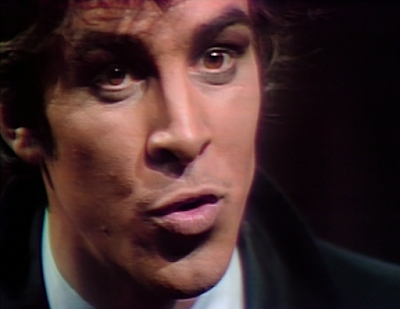 Christine: Is he really worse than the parallel Charles Delaware Tate you were expecting? He appears to have some sort of psychic powers since he seems to know what all the ladies are thinking when he gets them to gaze into his pretty brown eyes.

John: I can see it now. Barnabas will once again force himself on yet another uninterested woman... The ladies aren't even safe from his unwelcome advances in parallel time!

Christine: Barnabas must have an addiction to women. It would explain how he got himself into trouble with Angelique and how he never learned from that experience. It's strange how he forgot all about being in love with Maggie in his own time when she's right in his face in parallel time. I wonder how he is able to restrain his vampire urges and keep himself from nipping on Roxanne's exposed neckline.

John: So much remains unresolved from last week. I sincerely doubt that Claude North had anything to do with Carolyn's murder (or Angelique's for that matter). I still expect that Roger will ultimately be proven responsible for both murders. And while the Collins' clan members dropping like flies would seemingly suggest that we might be entering the twilight period of parallel time, I'm beginning to wonder if Barnabas is going to drag his new girlfriend Roxanne (and by extension her murderous master Claude) back to our time band, much to the chagrin of Julia!

Christine: Carolyn's murderer had different gloves and butchered her with the kitchen knife and not Claude's magical dagger. Parallel Roger is nasty, but I'm not sure he is bad enough to kill Carolyn. Mr. Trask must be the killer. He is a Trask, after all. All Trasks are bad! Incidentally, the Petofi box made another appearance outside Maggie's room in today's episode. 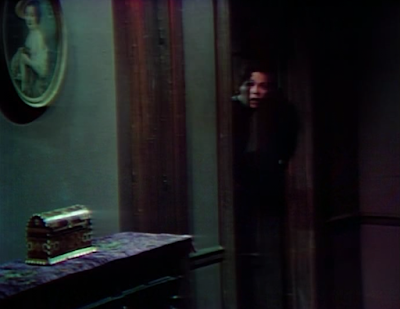