Barnabas smells lilacs. He asks for the spirit who is present to appear to him. A woman materializes and he asks her to speak to him. She disappears, and he begs her to come back. He finds a note that says, "She will die!" He calls to Julia. She runs downstairs and he shows her the note. He says a woman in 19th century clothes appeared and left it for him. He says the reference could be to Carolyn. Julia agrees that must be true. Barnabas says that she and the evil spirit appeared in 19th century clothes, but the childrens' were from 1970. 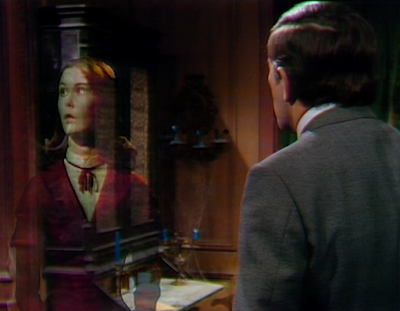 Quentin runs downstairs and asks where she went. Barnabas asks if he saw her, and he references the scent of lilacs. Barnabas asks who she is, and he tells her she's Daphne. Barnabas asks who Daphne is, and Quentin returns the question. He says that maybe Carolyn knows. He tells Barnabas that he wants to see her again, and calls out to Daphne. Julia explains that she's gone, and he says everyone is gone. 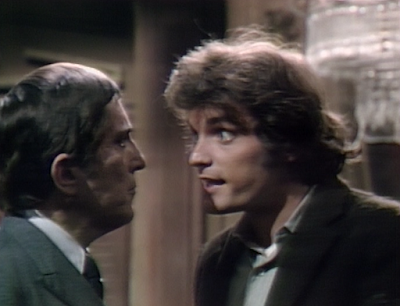 Gerard walks into a room where Daphne is and stands behind a tree branch. She approaches him.

Barnabas and Julia return to Collinwood. She tells him there's no one in the family history named Daphne. She tells him to go ahead while she waits in the foyer. Gerard stands at the top of the stairs, smiling.

Barnabas lights a candle and searches for the Collins family history book, which happens to be sitting on the floor in the middle of the room, facing the camera. He picks it up and flips through it. He looks around as if he's hearing sounds, and then as we hear banging at a shutter, the family history is pulled from his hands. He looks around the room at banging doors. 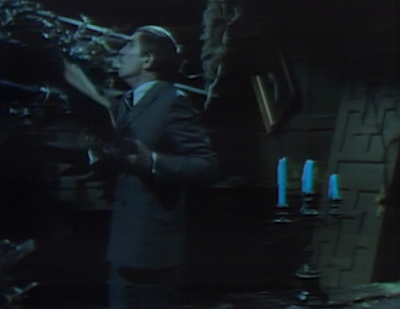 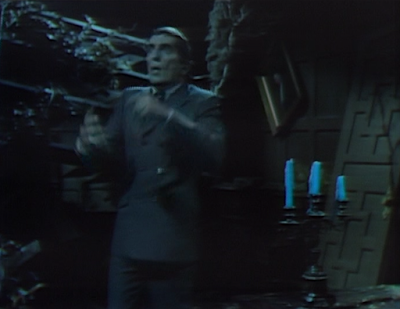 Julia calls to Barnabas and says that she saw him. He asks if it was the evil spirit, and she says it was David, and tells him he was upstairs. Barnabas goes to investigate and sees no one. He tells her to join him in the drawing room. They hear a sound. Barnabas tells her he's convinced that the family history is important, and he searches the room for it. Julia smiles, and asks if someone could have taken it. He smells lilacs and calls to Daphne. Julia says she's gone. Barnabas finds the book and says she could have left it. He flips it open and says it doesn't matter now, as the relevant pages have been torn out. He says that Daphne tore the pages out so they would never know. Julia smiles, and says it's a terrible pity. As they leave, she suggests it's time to give up. He sends Julia to the old house so he can go see Carolyn alone. Before she leaves, Julia looks up and sees Gerard standing at the top of the stairs. 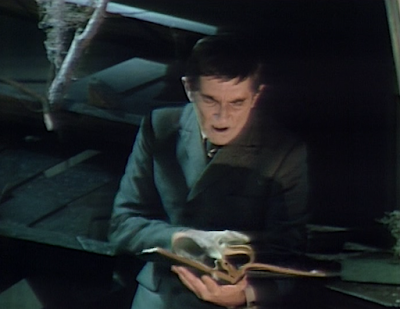 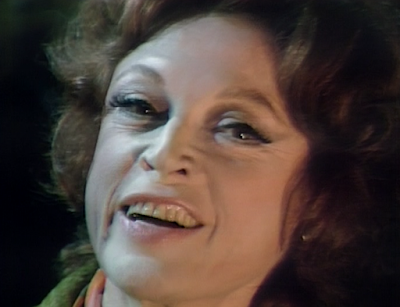 Carolyn looks at photo albums, trying to remember her family. She identifies her mother, and her uncle Roger, and someone she thinks is her cousin Quentin. Barnabas interrupts her, and she asks how he got in. He says he needs her help. He asks her who Daphne is. She says she doesn't know. He says he saw her ghost, and David and a young girl, and an evil man. She says she doesn't know. He asks her to identify someone in a picture. He says it's a woman with courage and spirit. She can't remember who it is. He tells her that the photo is of her. He then asks her to identify the others, and she is able. He tells her that she can help them. 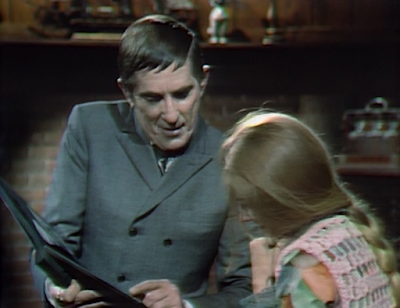 He says that Quentin told him that she could tell him who Daphne is. He begs her to help him. She shows him the portrait of Barnabas, and asks where he is now. Barnabas assures her that he is there, and he does want to help her. She says they've all gone—he mother, uncle Roger and David are all gone. She asks about the girl in the photo again, and he tells her that it's her. She laughs. He backs out of the house. After he's gone, she remembers that it is her in the photo. 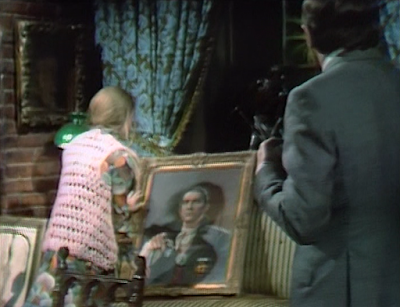 Julia says he should have known Carolyn wouldn't tell him the truth. He asks her to say that again. She does. He says she almost sounds pleased. She says he's being ridiculous. She writes it off as a natural exasperation. She tells him they're both tired. Barnabas asks her where Daphne's note is, and she asks why he wants it. He says he may want to give it to Stokes for an exorcism. She says she doesn't know where it is, and offers to look for it. 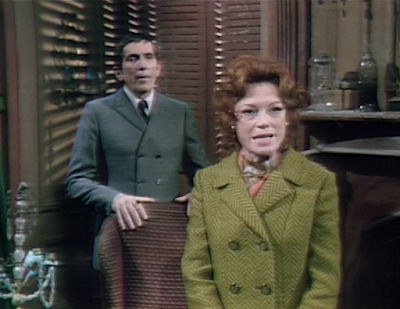 Daphne holds the note, and Gerard extends his hand to her. She gives it to him and he tears it up. 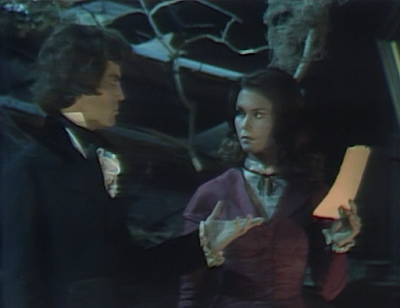 Carolyn arrives at the old house looking for Barnabas. Quentin tells her he went to visit Professor Stokes. Carolyn asks if she remembers him, and he does. They hug, and she says he's home. He asks what has happened to her. He says they've changed her. She says she came to tell Barnabas that she hasn't changed. Quentin says something terrible has happened to them, and asks why he can't remember. He asks her to help him. He says she loved him; that she loved all of them. She says everything will be all right. She says he must take a note to Barnabas for her. He says he'll do it for her. She tells him that they're going to be alright. He laughs. She leaves, and he realizes that he just saw Carolyn. 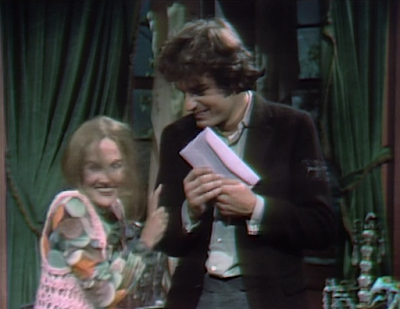 He opens the letter she gave him and reads it. It says she'll wait for him at Collinwood, and when he arrives she'll tell him all that she remembers. He goes to throw it in the fire, and Barnabas stops him. He asks if it's a note from Daphne, and he says it's from Carolyn. Barnabas takes it from him and reads it. He asks why Quentin was going to destroy it, and he says that no one must know. Julia comes in and says she can't find Daphne's note. He says it doesn't matter, and tells her to come with him to Collinwood. Alone in the old house, Quentin asks that no one tell anyone. 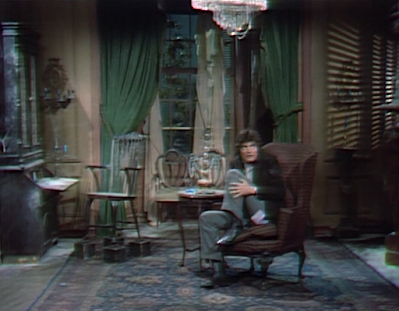 Julia is too frightened to go in to the drawing room. Barnabas finds Carolyn and says it means so much to him that she's going to tell him everything she knows. He touches her shoulder and she falls to the floor, dead. 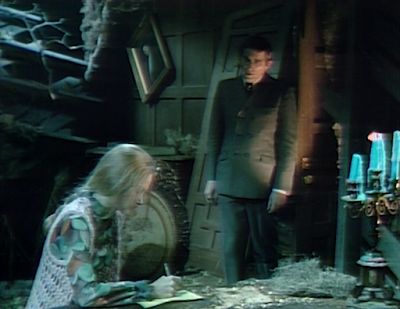 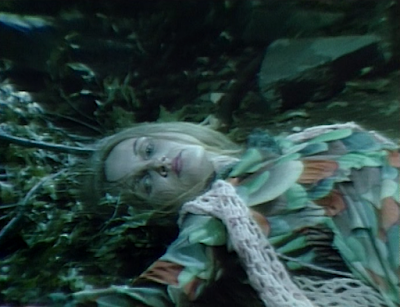 John: So Barnabas has yet to professes his unique and undying love for the new ghost in town, Daphne. Will today be the day? Tomorrow? Can it possibly wait until he inevitably runs into her in the past?

Christine: I think it will have to wait until she's got a corporeal body for him to kidnap and hold. I love how he goes up the stairs and says he can't see anyone when Gerard is so clearly standing in his favorite place at the top of the landing. 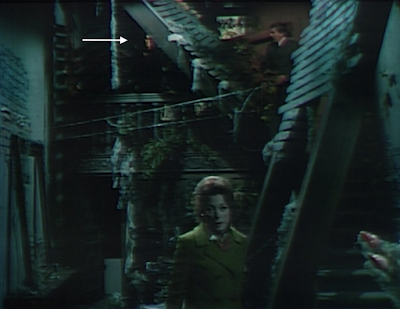 John: So is it just me, or did someone have the family history re-bound since 1970? And do you think they crossed out the volume number on the cover once someone realized that the Collins clan was all but dead and gone by 1995? 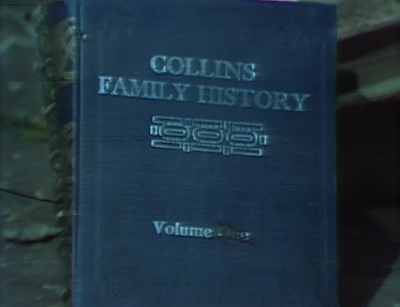 Christine: I believe the Volume One was crossed out so Barnabas would not see that the destroyed copy he picked up was actually Volume Two. Perhaps this means there's a chance he'll find Volume One and discover what he was looking for in the family history book. 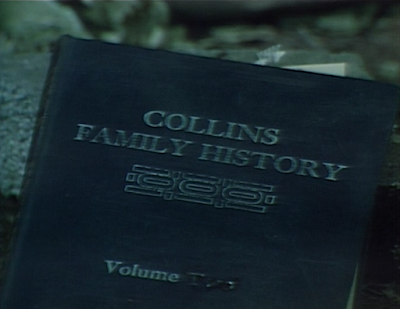 John: Well, I have to give the writers credit. Today's was one of the better 'kill the character right before they give up the goods' scenes... Do you think Carolyn was able to write anything down before she died?

Christine: No doubt she has written some poetic clue for Barnabas to try and piece together or he wouldn't have found her in such a ludicrous position for a dead person to maintain. 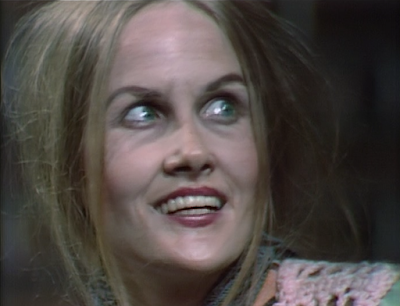