Barnabas and Julia hear the music playing again in the ruins of Collinwood. He tells Julia that music is seldom used to frighten someone, so he's going to go upstairs to force whatever it is out. 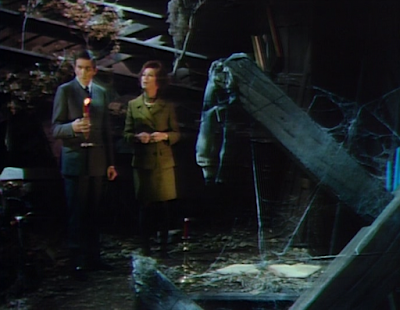 He tells her to wait in the foyer, and he goes upstairs. Barnabas yells for her to watch out as a bust topples over from the upstairs railing. She runs out of the house and Barnabas follows her. She tells him that they meant to kill her. They look back into the house and see a strange man in the window. 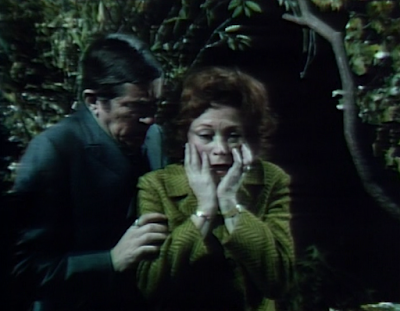 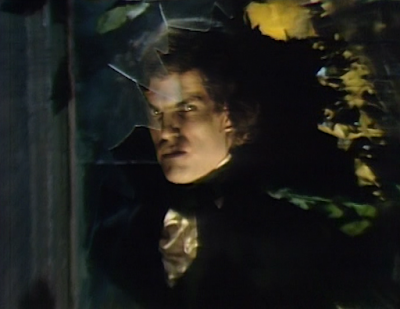 Back at the old house, Barnabas decides the man they saw was the one who tried to kill her. He says his clothes suggest that he's a ghost from the past. Julia says there was more than hatred in his look; the very essence of evil. Barnabas says his powers protect him, making him immune to such evil. Julia says there's a force of evil and corruption in Collinwood. Barnabas asks if he's the only force at Collinwood. He reminds her of the music. Julia says she can't believe there's another presence there. He tells her to rest, and he goes to speak to Carolyn about the ghost. Julia says she's not brave enough to stay there alone. 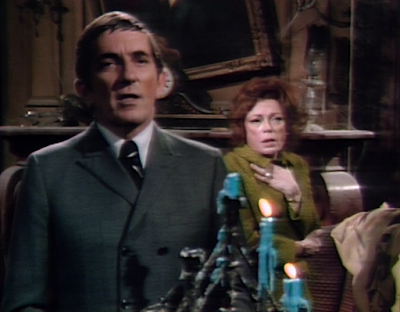 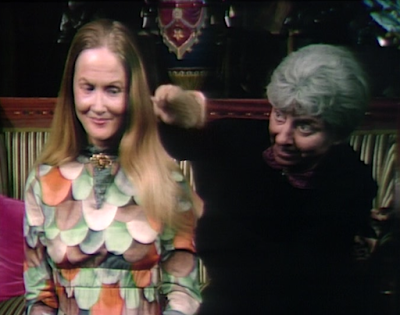 She says that she is a Collins, and Mrs. Johnson was only ever a servant. She says today is his birthday, and she should take him a present. She looks around for something to take him. She asks Mrs. Johnson who's getting the house ready for when everyone comes back; her mother, Quentin, and uncle Roger... Mrs. Johnson tells her that they're never coming back. Carolyn says they'll celebrate with a picnic at the gazebo. She looks at a photo from an album with Quentin and Maggie. Mrs. Johnson takes it and asks where she got it. She says it's the first time that they saw him. Carolyn says it's only a shadow, and Mrs. Johnson says a shadow that fell over all of their lives. 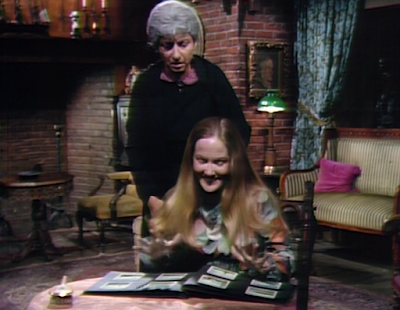 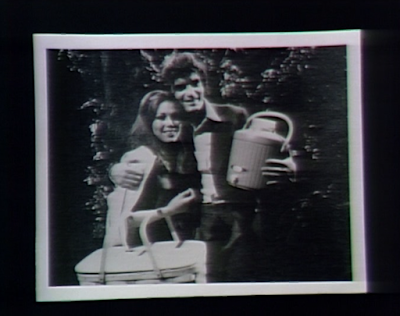 Mrs. Johnson asks Carolyn why she won't admit seeing him. She responds that she's too busy. There's a knock at the door. It's Barnabas and Julia. She tells them to go away. She asks Mrs. Johnson to make them go away. Julia says someone at Collinwood just tried to kill her. Carolyn says there are no murderers at Collinwood, just intruders. Barnabas says it was a ghost, and asks who it is. Mrs. Johnson runs out. 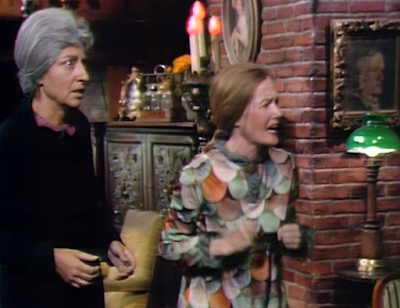 Barnabas presses Carolyn. Julia says if they knew what happened, they might be able to save everyone. Carolyn asks them to leave. Julia asks who the evil spirit controlling Collinwood is. Barnabas says she isn't going to tell them anything. Carolyn warns them that they had better leave Collinsport. They leave her, and she tells them to never come back again. She takes a party dress out of a trunk. 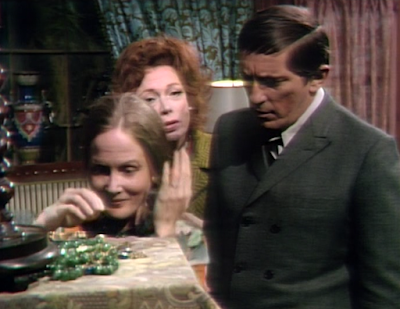 Mrs. Johnson is in the old house when Barnabas and Julia return. She asks if Carolyn told them anything, and he explains that she did not. Julia says that they can prevent what happened at Collinwood if they know. Barnabas points out that they haven't changed in 25 years, and Julia adds that when they get back to 1970, they can change things. Julia reminds her that she's been around long enough to know that there are things beyond their understanding. 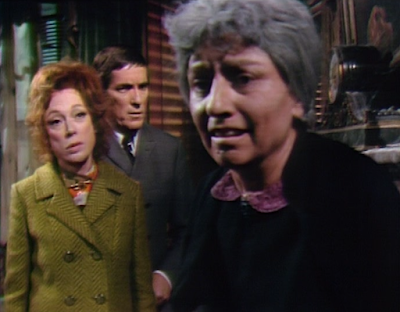 Mrs. Johnson says when it all began there was a spirit of joy in Collinwood. She says that one night the house was still. She could hear the waves hitting the rocks, and as she was leaving the house, she walked outside the children's playroom. She looks outside the old house and sees the ghost. She screams that she won't tell, and runs out of the house. 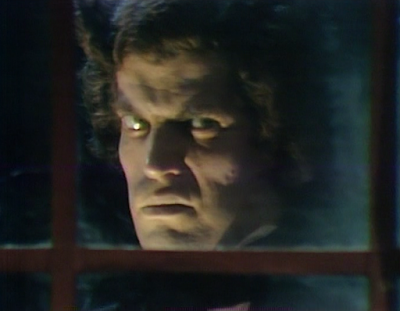 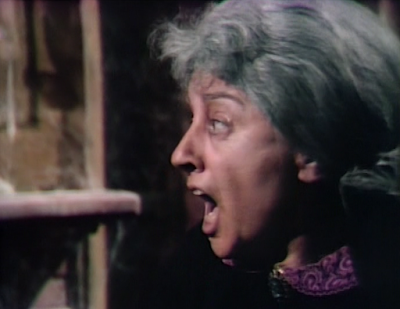 Julia tells Barnabas that he was there, and that they have to find Mrs. Johnson to protect her. They leave the old house, and don't see the ghost standing outside the front door. 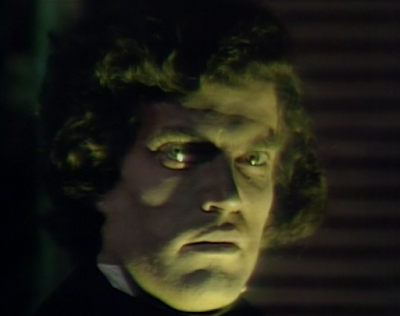 Mrs. Johnson makes her way through the woods. A hand grabs her shoulder, and she looks up to see the ghost. 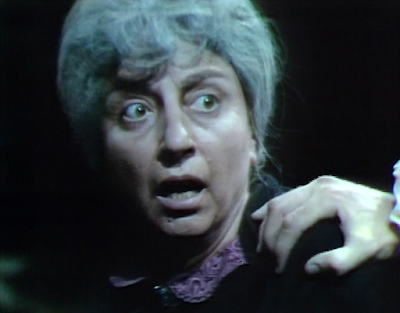 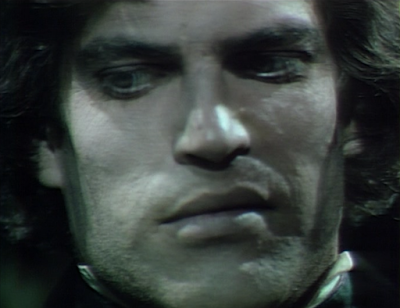 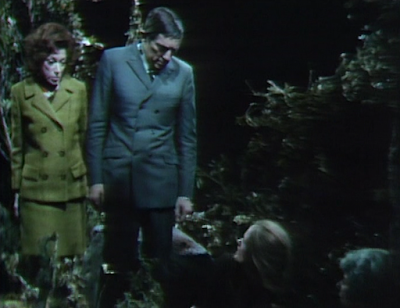 Julia and Barnabas arrive at the ruins of Collinwood. She asks what Mrs. Johnson meant by the 'children's old room.' She says she heard something, and they duck into the drawing room. They watch Carolyn enter and go upstairs. They follow her as she makes her way into a room in the hall. Barnabas says he doesn't ever remember seeing the room. They hear music, and Carolyn laughing. Barnabas opens the door. 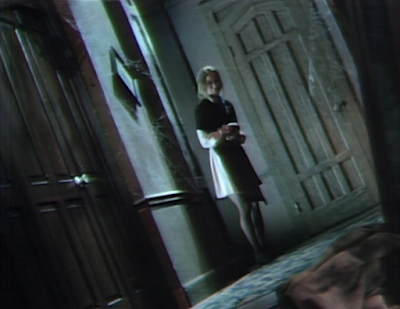 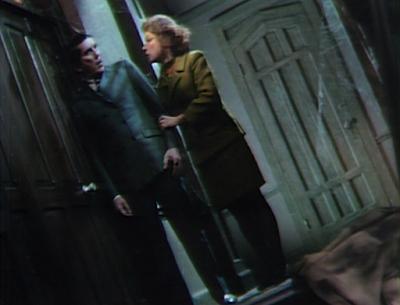 John: If you just saw a ghost in the window of Collinwood, would you really just walk away? Haven't Barnabas and Julia got enough combined experience with the supernatural to at least confront the ghost to ask who he is?

Christine: Perhaps they were reticent after he nearly brained Julia with a statue.

John: I was both looking forward to a big exposition scene from Mrs. Johnson, filling us in on the events of the past 25 years, while at the same time disappointed that we might find out by way of her telling us, as opposed to flashbacks with those involved. I guess I can be thankful that story hour with Mrs. Johnson was interrupted by the ghost; a ghost which we now know is not tied to Collinwood...

Christine: Déjà vu! It's not the first time Clarice Blackburn has died leaning against a tree and challenged not to blink while dead. Barnabas' sister Abigail died the same way in Episode 432.


John: After having just experienced parallel time, why is it that Barnabas and Julia are so sure that they're in the future of their own time band? Isn't it equally, if not more likely, that they're in an alternate future?

Christine: It is entirely possible that many parallel worlds are connected to that room, though it's understandable that the existence of multiple time bands would be beyond their imagination. There has to be some explanation for the play room that did not exist in the their time.

I think Clarice Blackburn being found leaning against the tree was a deliberate callback!