Julia says that nothing but terrible things have happened in Collinwood. Barnabas accuses her of being against their hearing from Carolyn. She says that she is too frightened to go in to the drawing room. Barnabas goes in alone and finds Carolyn sitting at the desk. He says that her talking to him means so much to him. He touches her shoulder and she falls to the floor, dead. 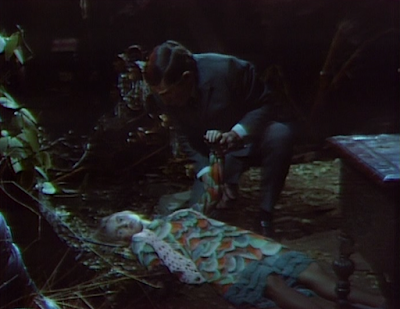 He calls to Julia, who stands in the foyer, transfixed by Gerard at the top of the stairs. He asks what she's staring at, and she says nothing. He tells her to come examine the body. They return to the drawing room and there's no sign of Carolyn's body. He finds a note on the desk. He reads from it: "The night of the sun and the moon, the night Rose Cottage was destroyed, the unfinished horoscope, the night I sang my song, the picnic, the murder..." He tells Julia they're all clues. She says the note is incoherent. He says they are all significant things she wanted to tell them. 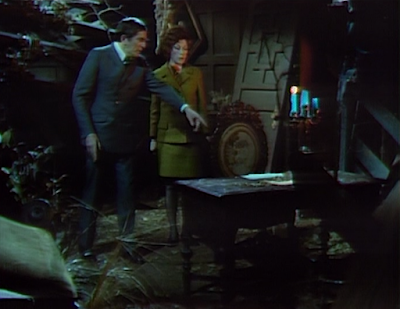 He tells her to call the sheriff, and she says they aren't supposed to be in the house. Barnabas says he's sure Carolyn is in the house. Julia says the sheriff will ask too many questions. He asks her what's wrong with her. She's disagreeing with everything he says. He demands that she go find a telephone and call the sheriff. He says he will look for Carolyn alone. She sees Gerard upstairs, and when Barnabas turns to look, she pulls him back and tells him to be careful. 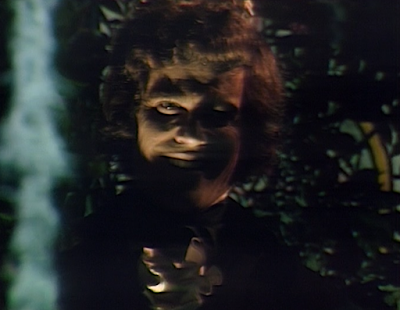 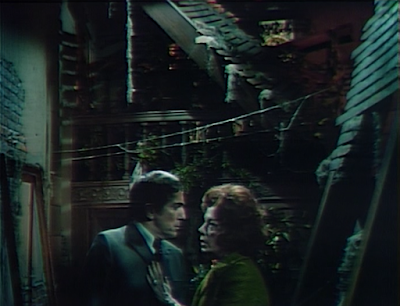 Barnabas searches Collinwood looking for Carolyn's body. He wonders why the evil spirit would take it. He says if he can get back to his time, he might be able to save her from this death. He goes to the secret panel in the drawing room and opens it. He is confronted by the mysterious man. Barnabas demands that he give him Carolyn's body. He hears Julia, and before she enters, the man disappears. Julia comes in and Barnabas says he intends to keep Carolyn's body. Barnabas says that the man can't harm him. He says he's going upstairs, and asks her to bring the sheriff when he arrives. He asks her again what is wrong, and she laments being out of their own time. He assures her that they can stop the cause of everything that has happened, and heads upstairs. Julia silently calls to Gerard, and asks if he had to kill Carolyn. 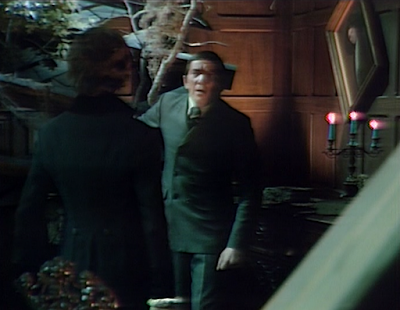 Barnabas tries to enter the playroom, but the door is locked. Julia comes upstairs with the sheriff. The Sheriff says he has some questions. Barnabas says they'll have to wait. The sheriff says if they were in the foyer, no one could get a body out of the drawing room. Barnabas tells the sheriff to try the playroom door, and when he does, it opens right up. They go inside, and are shocked to see Carolyn's body lying on a table. 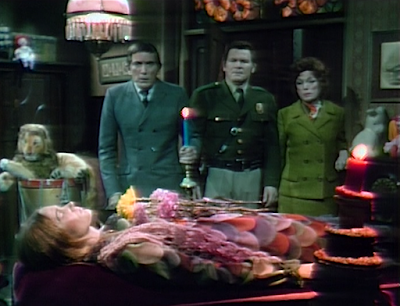 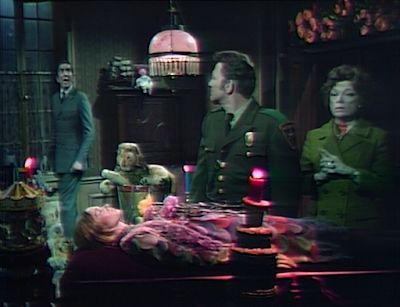 After Barnabas and the sheriff leave, Gerard appears. She tells him to leave the house before there is an exorcism. He looks at her, and she asks him what she must do. He smiles. 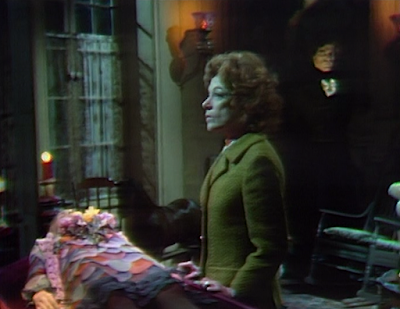 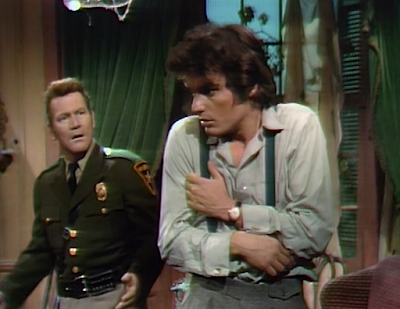 Julia walks in and Quentin tells her not to come near him. She asks the sheriff to hold him so she can give hi a sedative. He does, and Julia tells him that it's for the best. She gives him a shot and tells him to sit down. Quentin says it doesn't matter, because he always wins. He says he wants to go far away, and Julia says that might be a good idea. She tells the sheriff that Quentin has been in the sanitarium, and Quentin asks him if he'll take him back there. The sheriff agrees. Quentin goes upstairs to pack. The sheriff asks Julia if Quentin believes that Gerard exists. He asks Julia why she didn't tell Quentin about Carolyn. She says that she didn't come home last night. He asks about Barnabas, and where he is. She looks outside and sees Gerard in the window. Julia tells the sheriff to return just before dusk, after he returns Quentin to the sanitarium, and she will help him. 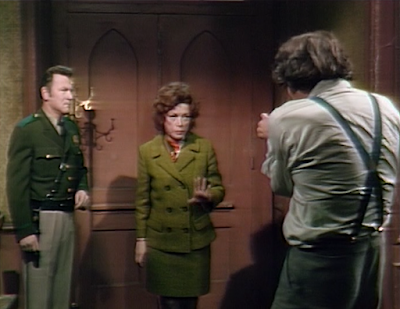 Barnabas opens his coffin, and is met by the sheriff with a cross. He screams as the sheriff tells him that he knows all about him! 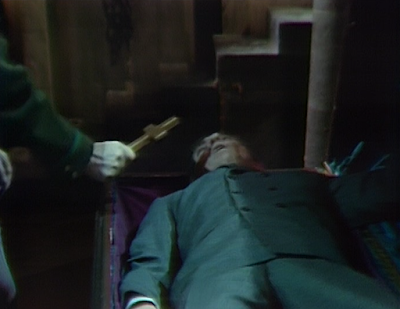 John: I wonder how much time was spent coming up with the random fragments of 'clues' explaining what happened at Collinwood, and whether those will truly amount to anything as time goes by. I can only imagine someone in Carolyn's mental state would have had a harder time creating those fragments than just writing down whatever it was truly happened 25 years ago...

Christine: I think it's likely she was thinking in fragments, but even if she weren't, she couldn't write down what happened in a straightforward manner or this storyline would have wrapped up sooner rather than later.

John: The sheriff is so close to being right. No one could get a body out of the drawing room through the foyer without someone in the foyer noticing. But he overlooks the opportunity for the body to be removed through any one of the opening windows (let alone the secret passage).

Christine: With Quentin's departure to the sanitarium, the last of the Collins family members have been removed, leaving only Barnabas and his possessed sidekick to carry the show with a cast of ghosts. We'll see if Stokes can survive the exorcism attempt or if he becomes another casualty. 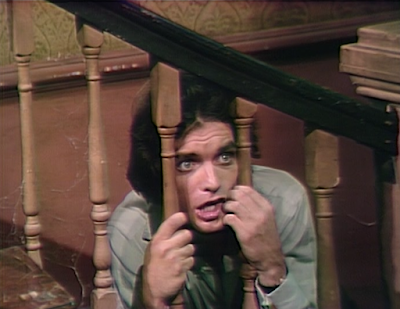 John: Ah, if only the sheriff had come armed with a stake! All would finally be over for Barnabas, and they could finally etch an end-date of 1995 on his tombstone. But alas, he'll surely worm his way out of trouble once more, likely to turn the tables on the sheriff himself!

Christine: Clearly he must realize by now that Julia is possessed by Gerard. What will Barnabas do without his trusty gal pal at his side and how will he rescue her? Anything could happen in tomorrow's episode. Let's hope it does not disappoint!

"The Night of the Sun and Moon...The Night I Sang My Song?" Don't tell me this has something to do with "The Wild, Wild West?" Seriously, the cast is really pulling this off perfectly!