Stokes is smoking and drinking when Barnabas arrives to see him. Stokes says Barnabas is determined to enjoy his cheap triumph to the fullest. He says the police told him his daughter is dead. Barnabas says she was dead a year ago. 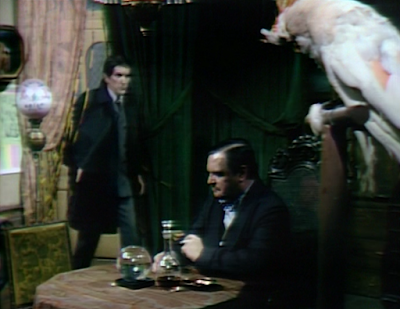 Stokes says she'll live again, so he can leave. Barnabas tells Stokes that the inspector is coming to see him about the murder he committed tonight. Stokes asks whose murder he's talking about, and Barnabas tells him that he knows full well that Claude North is dead. Stokes says that it's ridiculous to think he would have killed North. Barnabas says he needed Roxanne more than anyone else. He says he didn't come there to prove he killed North. He says he wants to know where Roxanne is. Stokes says he won't help him, and Barnabas explains that he has ways to make him help. 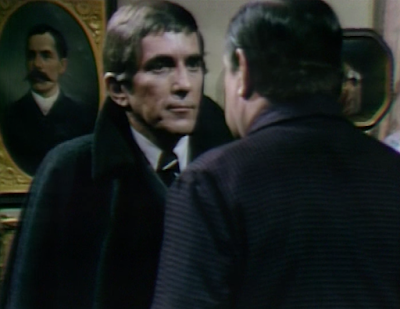 The inspector arrives, and Stokes says he understands he's going to accuse him of killing Claude North. The inspector says he has Barnabas' story, and he would like to speak to Stokes alone. Barnabas says that if they can find the girl, she can give them the answers that they need. 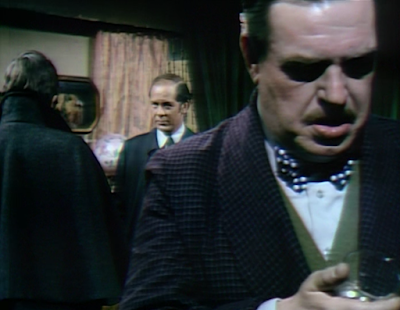 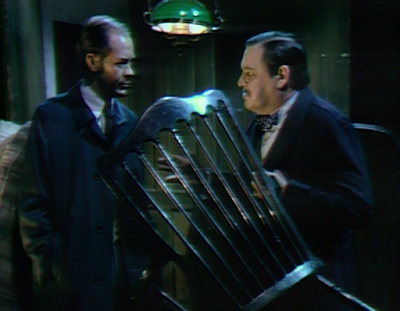 Barnabas reviews plans of Collinwood for other examples of other secret passages or rooms where Julia might be. 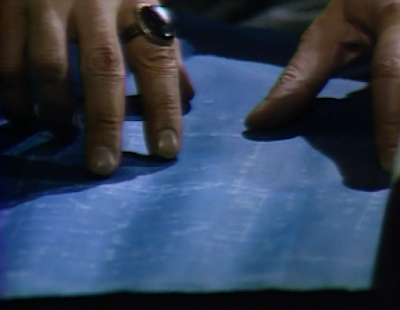 Julia tries to stay awake in her cell. She keeps moving. She hears something, and thinks it might be Angelique to torment her. She wonders why Barnabas isn't looking for her. She calls to him. 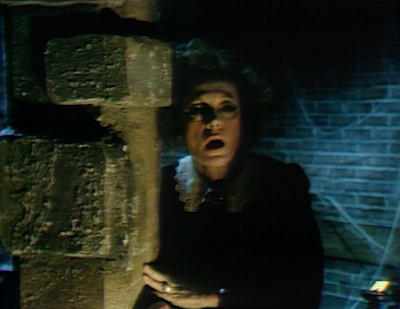 Barnabas explains to the inspector that an autopsy would prove that the dead woman is Angelique, by her original cause of death, and that's why Stokes would be against it. He says if he gets the body back, he'll just bring her back to life again. Barnabas says they must find Roxanne or Julia. He says Julia can testify that Angelique killed Bruno with a voodoo doll. 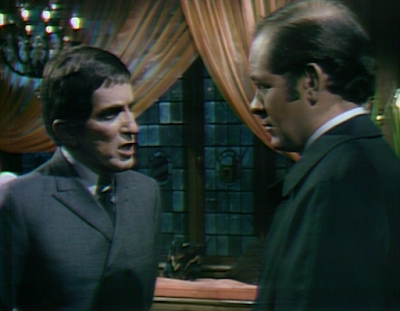 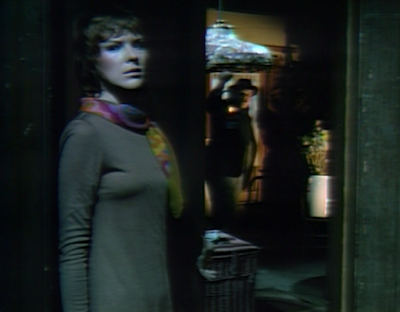 She comes out. She asks what the police want. He says they want to question her. She says she was forced by he and Claude. He says that she agreed freely, and for that reason she should stay hidden for a while. He says he'll bring her what she wants. She says Claude will do that, and he tells her that Claude is dead—stabbed in the back. She assumes he did it, but he says Barnabas did it. She doesn't believe him. He says that Claude told him about the oath she took, in case anything happened to him. She says she didn't. Stokes makes her look at him. He asks if she remembers taking the oath, and she says she does. He says Barnabas killed Claude, and asks her what she's going to do about it. 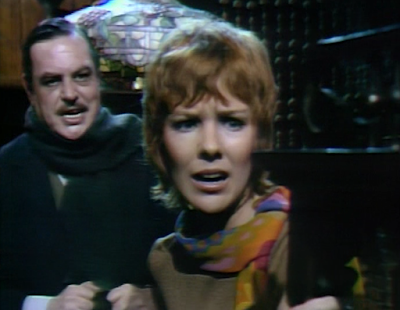 Barnabas is on the phone with the inspector, and asks him to let him know as soon as he hears the autopsy results. The inspector says it would help if they found Roxanne or Julia, and Barnabas says he's going to check the basement. The inspector offers to help, and Barnabas agrees. He goes upstairs, and Roxanne comes into Collinwood, dagger in hand. 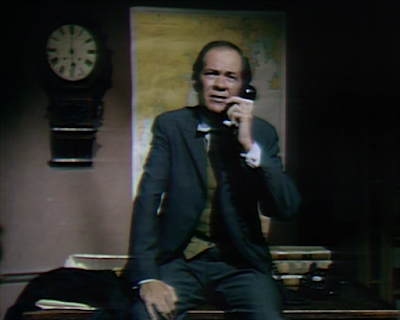 Barnabas is going through the plans when Roxanne comes in. She asks why he killed Claude. He says he didn't. He tells her that Stokes did. She says she doesn't believe him. She says he killed Claude, and he must die. Barnabas recognizes the dagger from the mausoleum. Roxanne says she made a vow to kill anyone who harmed Claude. He says that he's dead now, and she's no longer under his control. She raises the dagger, but drops it. Barnabas tells her that it's all right. She asks if she's really free, and he assures her that she is. She says she's lost without Claude. She says she can't stay. He says he needs her help. She must tell the police what she knows. She says she can't. She runs out, and Barnabas chases after her. 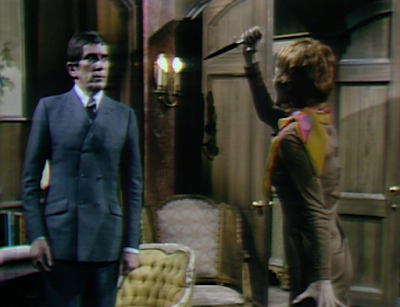 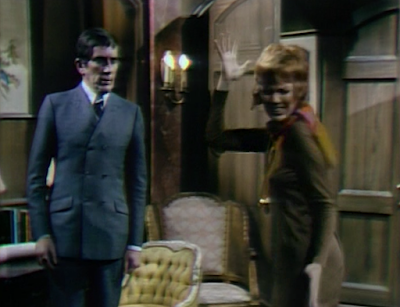 Julia tries to stay awake. She lays down on her bed.

Barnabas and the inspector go into the basement. Barnabas calls to Julia.

Julia dreams of Barnabas and Roxanne. He's showing her back to their time band. She asks why he looks sad. He says it's because of Julia. Roxanne says they won't forget her. She asks if he'd rather stay in this time band, and he says no, it would make no difference. They kiss. 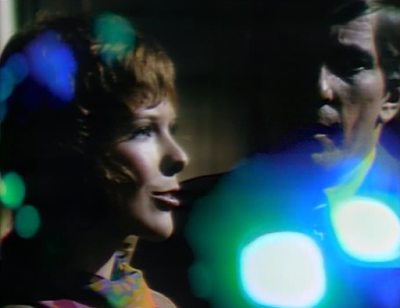 Barnabas continues calling for Julia. The inspector says if she were there, she would have heard them. Barnabas begins to doubt that they'll find her. They start back up the stairs.

Julia wakes, and calls out to Barnabas. She pounds on the wall, begging him to find her. 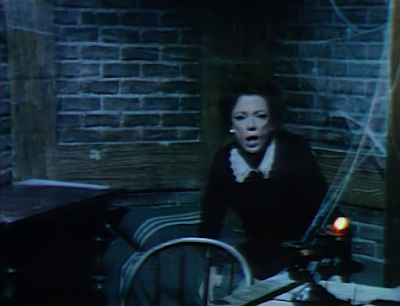 John: It's taken me some time to realize it, but Papa Stokes' look is almost a precursor (albeit a wimpy version) of Brando's Don Corleone.

Christine: Thayer David is pretty amazing in his range of characters, but it's the little touches that mean so much. I loved the way he passive aggressively blew smoke in Barnabas' face when he entered. 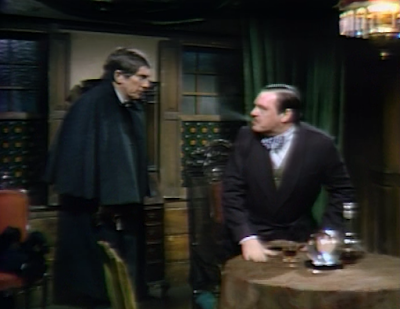 John: I guess now that everyone's basically dead, there's no harm in reviewing the plans of Collinwood to search for secret rooms. Of course it's not clear that he actually reviewed them closely, since they went down to the basement and didn't bother to check in the secret room for Julia. Of course having the inspector along wasn't going to be much help. He seems to be in way over his head, and just when you think he's not falling for all of Barnabas' nonsense, he seems to be fully invested in it.

Christine: You'd think they might at least try the bolted door behind them to see if she's died in one of those rooms. Geez! Utter incompetence! I hope Julia finds a way to rescue herself. 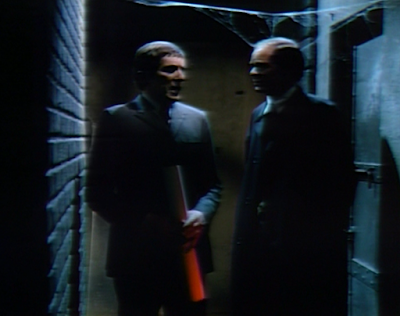 John: I'm a bit surprised that Julia's first concern be that Barnabas might leave her, particularly after dreaming of him locking lips with Roxanne!

Christine: I think that's why it's her first concern. What a nightmare! At least Roxanne has finally changed out of her nightgown. You know, this scenario is making the Leviathans look pretty good.
Posted by John Scoleri at 6:00 AM