Desmond tells Flora that Gerard is responsible, as he chokes. Something is choking him, and Flora calls to Leticia. She comes running and asks what happened to Desmond. He tells her to get Julia. Flora sends her to get Julia, and she says Julia can't help him — that this is the Devil's work. 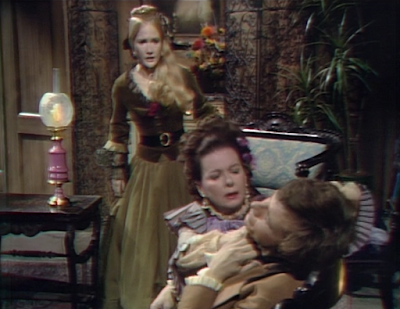 Trask asks Julia if she's as anxious to find out how Roxanne became a vampire. She says she is, but does not like his insinuations about her brother. She explains that Barnabas is upset and has gone into seclusion. He asks her who took her to the lighthouse. She says it was Roxanne. He points out that she couldn't stay with her during the day, and asks why she didn't leave. She says she was too weak. She reminds him that he too was attacked, and doesn't remember all of the details. He leaves to speak to Samantha. 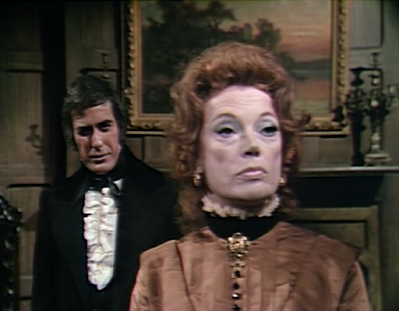 Leticia runs in and tells Julia that Desmond needs her at Rose Cottage. Julia goes upstairs to get her medical bag. Leticia laments that something happens to every nice man she meets.

Desmond goes limp. Flora comes in with a glass of water and shakes him. He speaks to Quentin, who's not there. He warns him to stay away, because it's dangerous.

Julia comes downstairs and she and Leticia are about to leave when Valerie comes in. She's surprised to see Julia. Julia explains that she has to go treat Desmond, and Valerie lets her go. Once they leave, Angelique wonders how Julia escaped, as Roxanne would not let her go. She goes to the window and calls for Roxanne to appear to her. 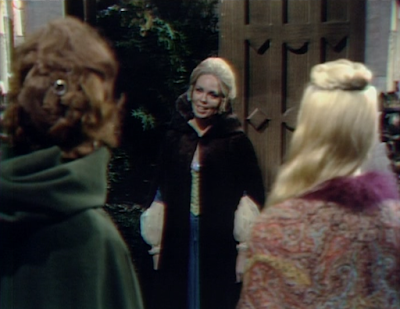 Julia arrives at Rose Cottage and examines Desmond. She asks how long he's been stricken. Flora tells her that he almost choked to death. She says he seems to be trying to choke again. Flora asks if he'll be all right. Julia says there's nothing physically wrong with him. Flora doesn't understand. Leticia says that she understands — she claims it's the Devil's work. She wonders who would want to do this to him. 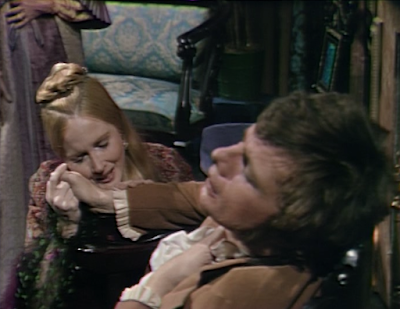 She takes his hand, and says it's someone not far from here. She sees a vision of the voodoo doll. She says it's on some stairs with Desmond's ascot around it's neck. She tells them someone is using black magic on him. Julia asks where it is, and Leticia says it's on stairs, but she can't recognize them. 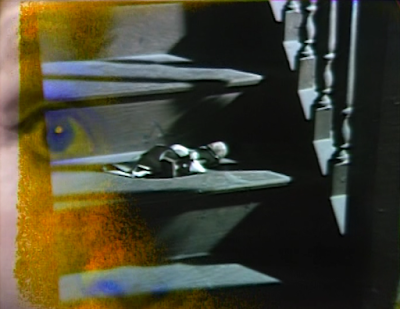 Angelique finally gives up when Roxanne doesn't answer her call. Trask comes in and asks her if she knows where Samantha is. She says she hasn't seen her. Trask points out that Valerie always seems to be alone — without her husband. He asks if she knows where he is, and he says that he appears to have completely vanished. She says he might be at Rose Cottage helping with Desmond's emergency. 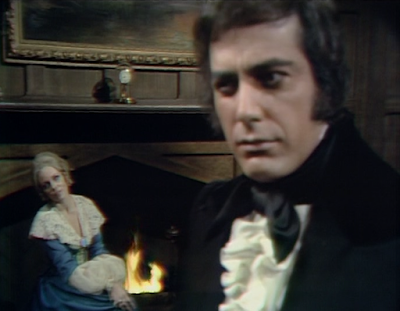 Leticia asks Flora why Julia had to leave. She explains that she couldn't do any more for him. Trask arrives, and asks if he can help. She says that no one can help. He says the man who caused it can — Quentin. He claims that he is a warlock. He points out that Quentin and Desmond had a quarrel earlier. Trask asks what Julia's diagnosis was. Flora says she found nothing physically wrong. Trask says that he's correct in assuming that it was witchcraft. Flora says she believes in witchcraft, just not that Quentin is responsible. She mentions what Leticia saw. He asks where the doll was. She says she saw the doll on stairs that didn't seem to lead anywhere. Trask considers stairs to nowhere, and then thanks Leticia and  leaves. 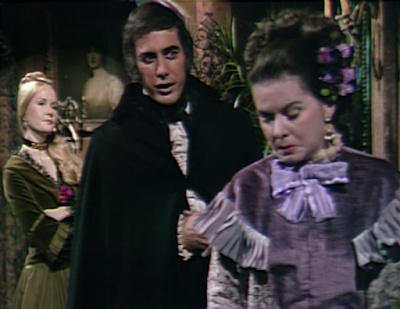 Julia asks Angelique if she plans to kill off the entire Collins family since she failed with her. She asks what Julia is talking about, and she says witchcraft. Angelique asks her to explain her accusation. Angelique says she doesn't just harm someone for no reason, and she never met Desmond. She asks how Julia destroyed Roxanne. She explains that Roxanne's brother kept her from her coffin at dawn, and now she's at peace. Julia says that someone is using witchcraft against Desmond, and it's in Angelique's interest to help them find out who it is. She asks why. Julia says if anything happens to Desmond, there will be questions, and she will become the one accused. 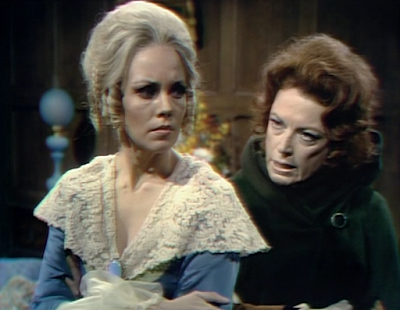 Trask arrives at Collinwood and sneaks around.

Angelique tells Julia to guard the door. She says she'll try to contact whoever is using black magic. She kneels by the fire and speaks to the flames. She calls out to the other witch or warlock. She sees the face of Judah Zachery in the fire. She gets up, disturbed. Julia asks what she saw. Angelique says whoever the witch is, he's hostile to her as well, and there's nothing more that she can do. Julia starts to leave, and Angelique reminds her that nothing has changed between them, and she will deal her at the first opportunity that presents itself. 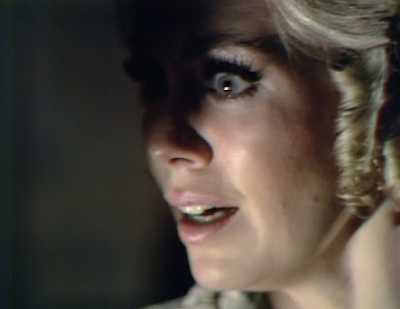 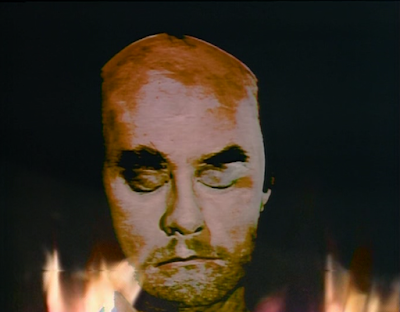 Trask sneaks into the basement of Collinwood, and finds Quentin's stairway to nowhere. He finds the voodoo doll. He thinks he has finally found the proof that Quentin is a warlock. 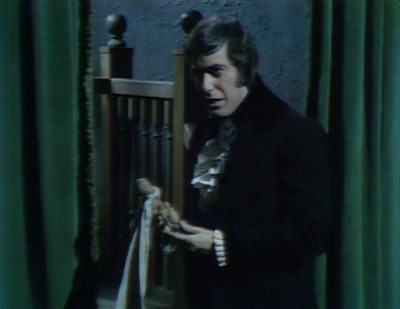 John: So I understand for dramatic reasons that they don't want to kill Desmond, but if Gerard/Judah had tied a knot around his neck and left it, why would the choking come and go? He should have been dead ten times over.
Christine: Maybe Judard loosened the knot a bit before planting it on the Stairway into Time, so that it would continue to constrict but not kill. You know how the witches on this show like to prolong the suffering.
John: Was Angelique expecting to reach Roxanne's ghost voicemail? When your undead servant doesn't answer the call, that's not a good sign. Of course you might think that she would still be able to reach her in the great beyond...
Christine: I'm not sure why Angelique was so surprised that Julia had escaped when she didn't bother to stick around to see her plan to fruition. Was she off shopping in Bangor? Is that where Barnabas is hanging out now?

John: I thought we might get an extended Julia/Angelique team-up — not that it could ever last — but I was surprised that they were back to their old rivalry before Julia even left the room.
Christine: I am hoping for a magical duel between Judah and Angelique. I wonder if he will finish his business with Quentin first before turning his eye to her. 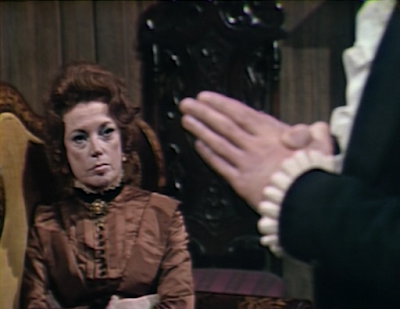