Barnabas is sitting by the fireplace in the old house when a man arrives to see him. He introduces himself as Randall Drew, Roxanne's brother. Barnabas offers him his condolences, and Randall asks Barnabas what he knows about Roxanne's death. He tells Barnabas that Trask has told him that Roxanne died as a result of an act of sorcery, and that Barnabas was implicated in her death. Barnabas is surprised, and Randall tells him that he doesn't believe what Trask told him. He asks Barnabas what he thinks about the cause of her death. Barnabas attributes it to the animal attack. Randall asks if she seemed ill when Barnabas saw her before she died. He asks who would want to harm her. Barnabas says she was loved by everyone who knew her, including himself. Randall asks if Barnabas is a married man, and he admits that he is. Barnabas explains that Trask has been in a disturbed state since Roxanne broke off the engagement with him. Randall says he understands, and hopes his questions haven't bothered him. 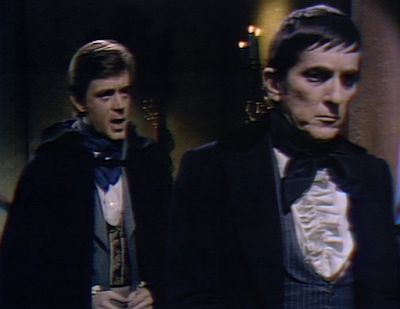 Samantha tells Valerie that she will always wonder who was responsible for Roxanne's death. She says she thinks there's a monster on the loose, and both Roxanne and Hortense died as a result. She says Hortense mentioned a bodyless head. Randall arrives at Collinwood, and Samantha introduces him to Valerie. He realizes that she's Barnabas' wife. She leaves them. He asks Samantha what she knows about Barnabas. 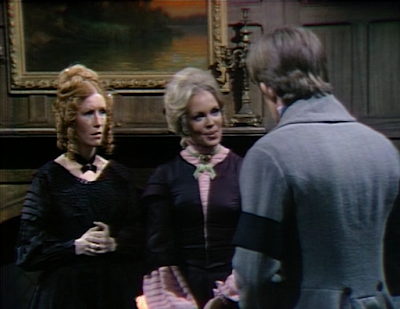 Julia says she declared Roxanne dead, and doesn't need lawyers probing questions. Barnabas says that by dusk tomorrow, it will all be over. Angelique comes in and tells Julia that she told her she wasn't welcome in the house, and asks if she is going to leave, or if she has to remove her. Barnabas tells Julia to return to Collinwood so he can speak to Angelique. She leaves and Angelique tells him not to bother speaking. He says they will never reconcile, so she can do what she wants. She asks why he's more bitter to her now than ever before. She blames Julia, and says she knows that she's not his sister. She tells him she'll find out who she is and why she's so important to his life. 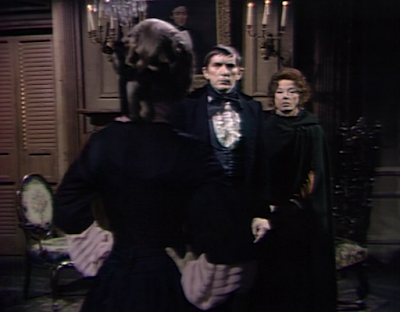 Samantha suggests that Randall stay and open a practice here. He says he could take a place in town, and she says she doesn't want him working for the family lawyers. She tells him he has every right to resent Quentin. He introduced him to his love, and he took her away from him. She asks how he can forget Joanna. He says it's past history. He hasn't seen her in four years and doesn't plan to see her again. Julia walks in and asks about the funeral.

Samantha says reverend Stone will give the eulogy. Trask insisted on having the honor, and she says it gave her great pleasure to turn him down. 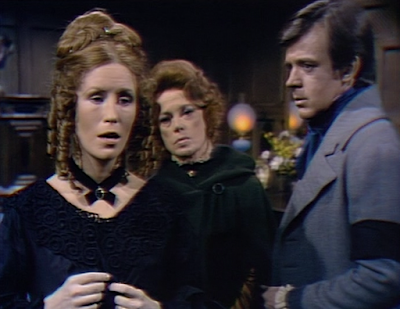 Angelique sneaks into Julia's room and searches her drawers. She discovers a diary.

Julia is sitting by the fire in the drawing room when Angelique walks in. She asks Julia about Professor Stokes. Julia says she's never heard the name, and Angelique provides several more: Elizabth Collins Stoddard, Carolyn Stoddard, Chris Jennings. Julia says she doesn't know what kind of game she's playing, and Angelique tells her she knows that they all exist in 1970. She shows Julia her appointment book. She says she had a lot of thoughts where Julia came from, but she had never dreamed it was the future. Julia refuses to acknowledge what she's saying. Angelique points out that Barnabas' name comes up most of all. 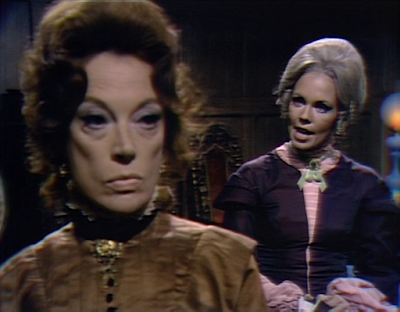 Julia decides to tell her the truth. She mentions meeting Barnabas in 1967. Angelique can't believe he didn't kill her. She says she knows Barnabas too well, and Julia corrects her. She says she doesn't know him well enough — not now or ever. Angelique is surprised to hear that she might also exist in 1970. Julia says she first met her in the Spring of 1968 when she was going by the name of Cassandra, and married to Roger Collins. Angelique is excited to hear that she'll be alive in 100 years. Julia says that a great disaster is coming to Collinwood in the future, so she may never make it. Angelique says that the same can be true of she and Barnabas. She asks about Julia's relationship with Barnabas in 1971. She says they were the best of friends. Angelique says that she thinks Julia has some influence over him. She thinks that Julia decided Barnabas will never come back to her, perhaps because she loves Barnabas herself. She says she will deal with her as an enemy. She promises Julia that her future will change. 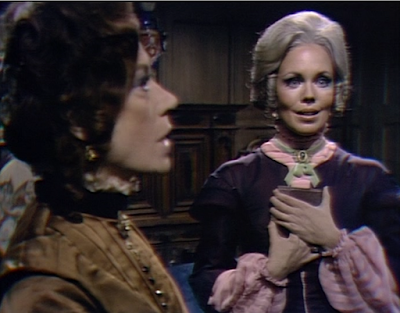 Samantha asks Randall to open the coffin so she can get one final look at Roxanne. He does. She asks why this had to happen to her. Randall closes the coffin and they leave. 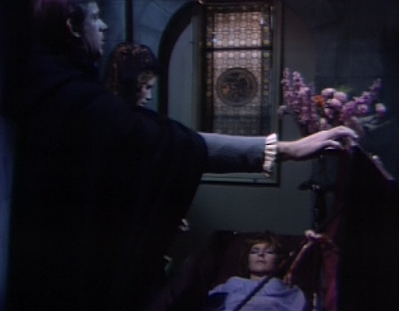 Julia puts a stake and mallet in her bag.

Angelique looks into the fireplace and says she knows what Barnabas wants Julia to do, but speaks to Julia, telling her that she's too tired. She brushes Julia's handkerchief over a voodoo doll. 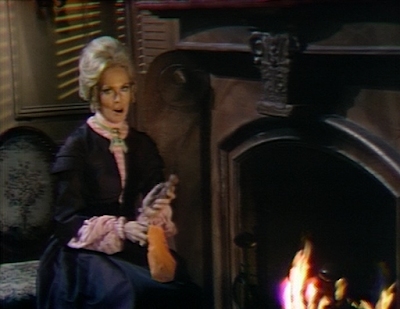 In her room, Julia falls asleep. Hours later, she wakes up, realizing what has happened.

Valerie asks Samantha who was standing next to Trask at the grave. She says that's Gerard Stiles, the most devious man she's ever met. She says he's greedy, ambitious and selfish. Randall asks where he came from. She says he arrived in Collinwood six months ago to give them news that Quentin was lost at sea. Randall asks why he's still there, and she says it's her own fault. Angelique sees Julia sneaking out of the house. Samantha says she's surprised Barnabas wasn't at the funeral, given that he was so fond of Roxanne. 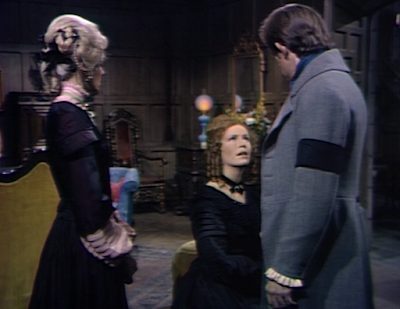 Julia arrives at the crypt, and opens Roxanne's coffin, only to find it empty. She turns to see Roxanne approaching her, arms raised and fangs bared. 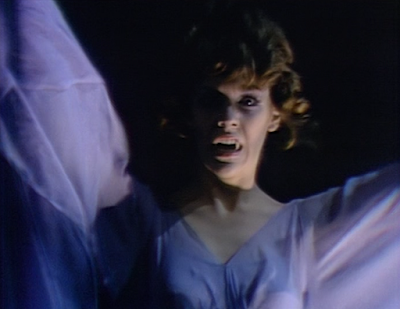 John: We got a standard Soap Opera storyline dropped into today's episode, as we find out that Quentin's true love Joanna was originally Randall's love interest. And by the sound of it, he's not yet aware that she's no longer among the living. All signs point to Randall sticking around in Collinsport for a while.
Christine: I was amused when Samantha told Valerie about the "bodiless head" Hortense spoke of before dying. It seems she got her parts mixed up.
John: It was quite a trip down memory lane today, thanks to Angelique finding Julia's appointment book. It was probably nice for viewers, even those who had been watching for the past four and a half years, to get a recap of just how and when Julia and Angelique first met. And it's great how quickly Angelique figured out that Julia must love Barnabas to have put up with his shenanigans for so long.
Christine: Julia should have known better than to keep her 1970 appointment book around, especially after Angelique's return. Since she claimed Barnabas' name appeared most often, it makes me wonder what those entries looked like.
John: Thanks to her ready-made supply of voodoo dolls, Angelique was able to delay Julia's trip to the crypt just long enough... though the Julia we know and love would never go on a vampire hunt without a trusty cross, right? Of course, since it's night, I fully expect that Barnabas will make a nick-of-time arrival, and then it's just a question of will he be able to see his (latest) true love dispatched?
Christine: The fact that Roxanne exists as a vampire in 1970 would seem to indicate that she won't get staked, since it's unlikely she would have become a vampire if Julia had not walked the path of the time traveling staircase to release Barnabas from the coffin to give her the bite. Incidentally, I wonder where that wind was coming from in the crypt. 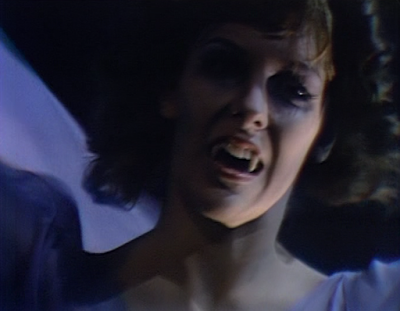