Leticia searches Rose Cottage for the mask. She finds a box and picks the lock on it. Inside, she finds the bejeweled mask. She takes the box and runs into Gerard. He asks what she was doing in the room alone in the dark. He asks her what's in the box, and takes it from her. He picks up the mask, and asks where she found it. She tries to convince him it's worthless, and he accuses her of lying. He asks where she got it, and if there's more where it was. He asks where she was going in such a hurry. She says she was going to put it back where she found it, but she could instead take it to Mr. Braithwaite to get an appraisal. He tells her to do that, and says he will wait for her. 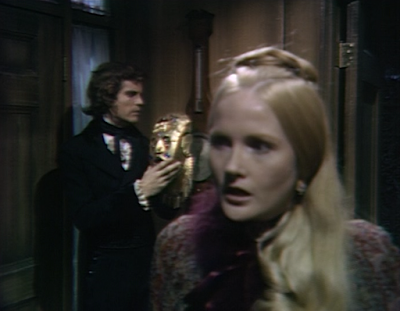 Leticia takes the box back to the secret room in the cemetery, unaware that Gerard followed her. He doesn't see her use it, and wanders around the cemetery looking for her.

Leticia shows Julia the mask. Julia tells her that once the storm begins, everything will be ready. 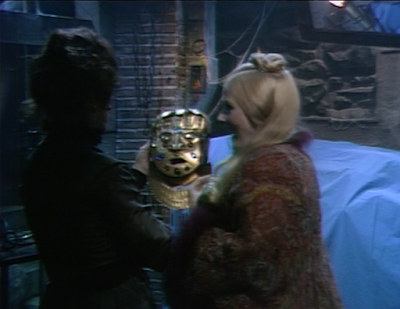 Gerard returns to Collinwood and finds Daphne. He asks her to call him Gerard, and she says she'll refer to him as Mr. Stiles. He asks about Julia, and she tells him she's not there. He asks if she ever smiles and she excuses herself. Before she goes, he asks her what her real name is. She says Daphne Harridge is her real name, and asks why he would ask her. He tells her he researched where she came from, and there was no one with her name from there. She tells him that it's none of his business where she came from. He tells her that he likes her more and more all the time. She asks why he keeps investigating her, and he says that it was finding the gun in her purse. He reminds her that Quentin is his best friend. He apologizes for bothering her. She bids him goodnight. 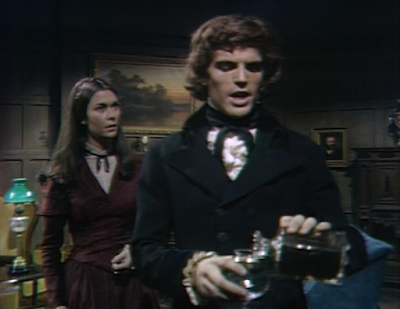 Zachery's head is sewn onto his body. Leticia tells Julia that she's truly a wizard. Julia tells her to get the blood so she can fill his veins. 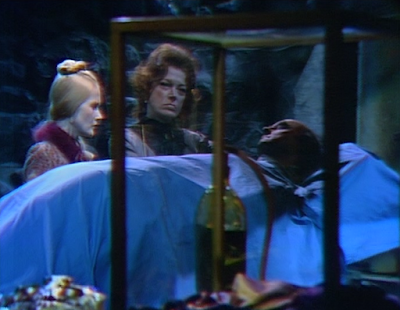 Gerard is playing the piano when Quentin bursts into the drawing room. He asks him where he got the music, and Gerard tells him it was on the piano. Quentin tells him that's impossible, because he burned the music a year ago. Gerard tells him that he must be mistaken. Quentin tells him that someone is doing this. Gerard asks what he's talking about. Quentin reminds him of Joanna. Gerard asks if she's back in his life. He says she is, that he's getting letters from her, but it's impossible because she died months ago. Quentin shows him the first note that said she was dead. He then describes the other notes. Gerard says that either someone is trying to upset him, or Joanna is communicating with him from beyond the grave. Quentin is sure that someone living is responsible. Gerard tells Quentin to let him know if there's anything he can do. He asks if Quentin has noticed that Leticia has been acting strange, and if he knew that she had befriended Julia. 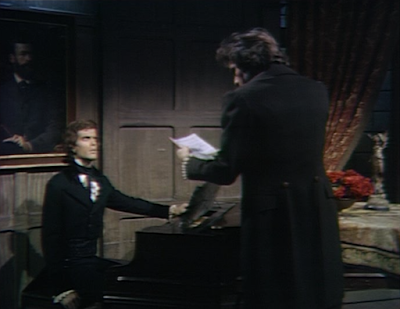 Julia places the mask on Zachery's face and connects wires to it. She tells Leticia that they just have to wait for lightning to make contact with the mask. 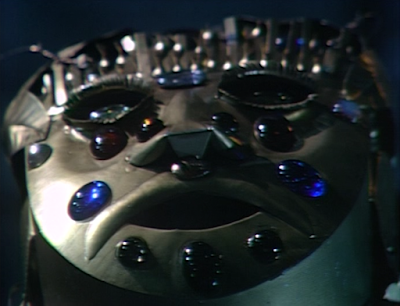 Daphne asks Quentin if she can get him anything. He tells her know. She asks if everything is alright, and he explains that nothing is every alright in the house. She apologizes for asking, and offers to help if she can. He thanks her, and points out how gentle she is. He says she'll be very good for Tad. He says he wants to be sure she's happy in Collinwood. She assures him that she is.

Leticia asks when something will happen, and Julia explains it will happen when lightning touches the body. Leticia tells her that it's not going to work. The body then begins to convulse as electricity flows through it. The body stops moving, and Leticia asks if they failed. Julia listens for a heartbeat, and tells Leticia that Zachery is alive! 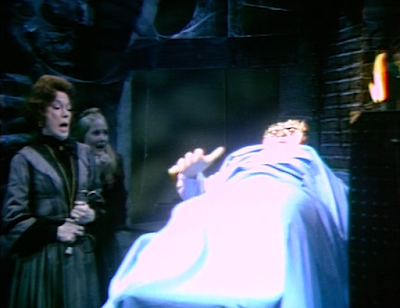 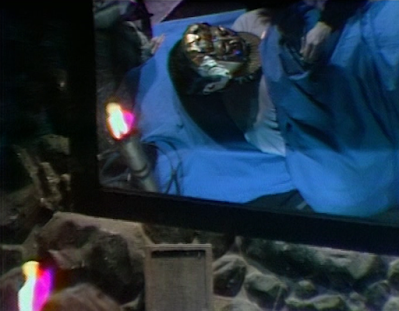 John: I was hoping we might get another Abe Vigoda sighting, but it looks like Leticia won't be visiting Mr. Braithwaite any time soon.
Christine: I was expecting Gerard to discover Judah Zachery's secret resting spot after following Leticia, as well as put two and two together on Daphne's pistol packing and the sudden Joanna clues turning up. This guy is really losing his edge. Maybe he'll make some headway on one of those fronts by the end of the week.
John: For a minute I was beginning to wonder if Julia's lab setup was actually a still for manufacturing moonshine! Where is she getting the blood for this transfusion? Is she raiding Barnabas' personal stash?
Christine: Where does Julia ever get her endless supply of blood? That might be a question worth investigating. She must be the one feeding Barnabas.

John: As tempting as it is, I think I'll forego creating a lightning stock footage tracker. But every time I see that, I'm going to think of the opening to Bob Wilkins' Creature Features.
Christine: So, Judah Zachery has got a heartbeat. Will he be able to talk? Will he be able to sing "I Wanna Dance with You" with Leticia? What is in store for the Collins family now that the evil dead sorcerer has been restored to life? 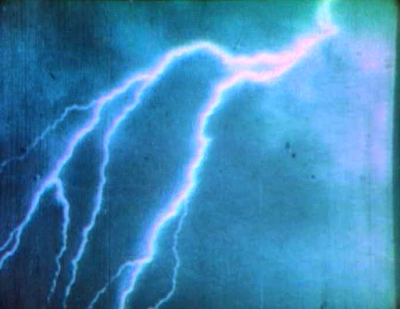