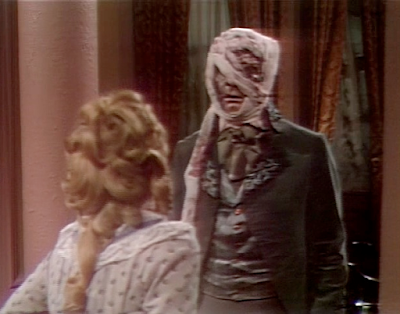 The ghost of Jeremiah appears in front of Angelique, and she asks what he's doing there. She tells him to return to his grave. He walks towards her, ignoring her commands. She begins to sound frightened as she tells him that she controls him, yet he continues towards her. She asks him who has the power to bring him here. We hear Jeremiah laugh as he closes in on her. Angelique pleads for him to leave her alone. His laughter fades, and when she looks up, he is gone. 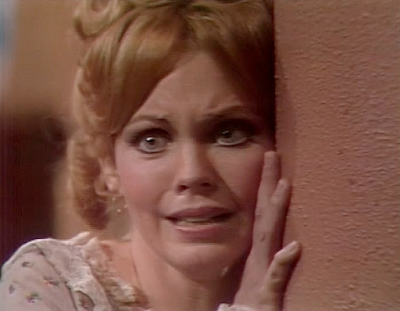 Barnabas enters and asks her what's wrong. She passes it off as nothing happened, but he knows better. She asks if he sent for the minister. He said he has, and she asks him if they must live in the old house after they get married. He explains his mother gave them the house as a wedding present. He asks her what she's afraid of. Ben arrives, and Angelique goes upstairs to get dressed. 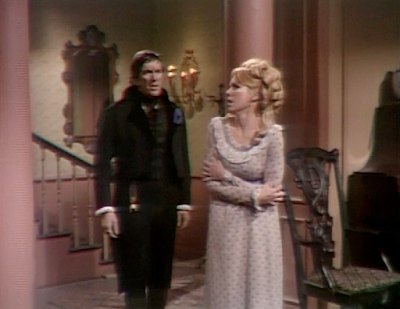 Barnabas tells Ben that he and Angelique are going to get married tonight. Ben wishes him the best, and then says Reverend Trask is back, snooping around the stable. Barnabas tells Ben to bring Vicki to the house, where she'll be safe. He then says he wants Ben to be his witness at the wedding. Ben says he hopes the wedding will bring an end to all of his troubles, which confuses Barnabas. 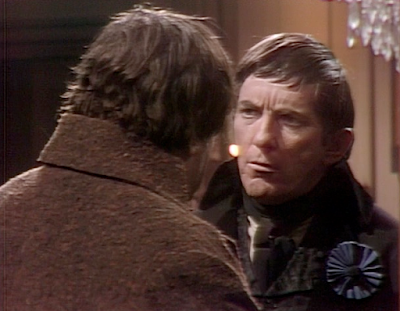 Angelique puts on her wedding dress. When she looks in the mirror, it appears that the dress is covered in blood. 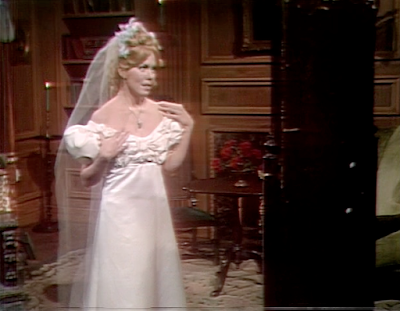 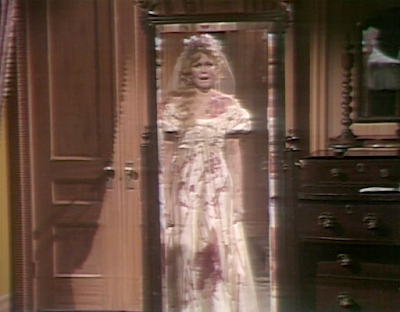 Ben brings Vicki to Barnabas. He tells Ben to bring some food to Vicki's room. She said she heard Trask's voice, and she's afraid he will find her. Barnabas says she'll be safe—she's in his house now. He says even if he believed in witchcraft, he wouldn't believe the stories they've made up about her. She asks why, considering he knows so little about her. She offers to tell him the truth about where she came from. She tells him she was living in the year 1967, where she was working as a governess for his distant relatives. She lost consciousness during a seance and found herself in the past. 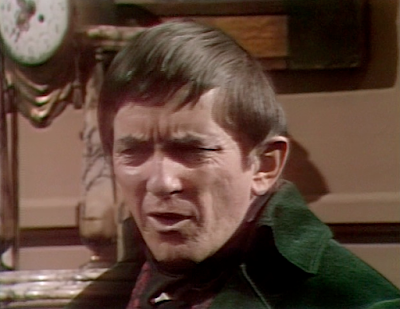 She says she recognized him because he looks like his namesake from the future. He says he believes her. Ben returns and says he's fixed a tray for her. He thanks Vicki for telling him the truth, and sends her upstairs. After she leaves, Barnabas asks Ben if she could be a witch. Ben says she's not a witch; he's sure there's no evil in that girl. Barnabas asks if there's more to what he means, and Ben denies it. 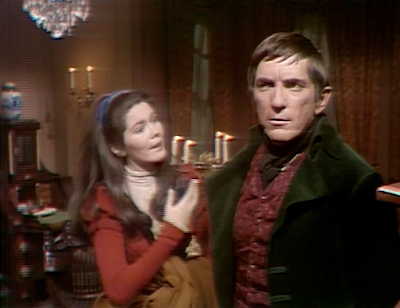 Angelique is packing a bag when Barnabas enters her room. She says she wants to be married somewhere else. She wants to get out of the house. He asks her what is the matter. She says she's frightened by an evil presence in the house. 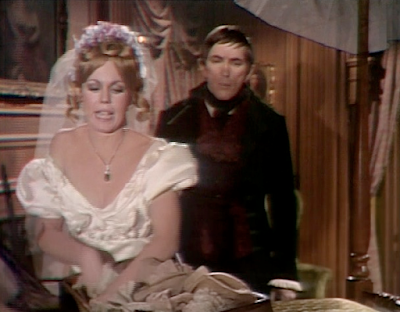 He looks in her suitcase, which no longer has her clothes. It only has Sarah's doll and a few pins. He says it must mean something. There's a knock on the door and Ben says the minister is downstairs. Angelique says to send him away, and then changes her mind. She says she wants to be married immediately. She says she'll be down in a moment. 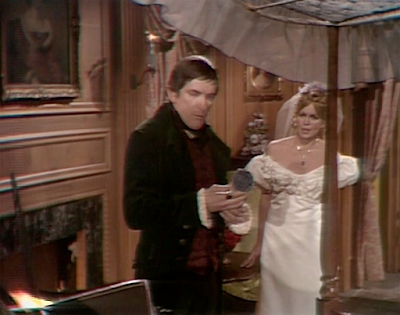 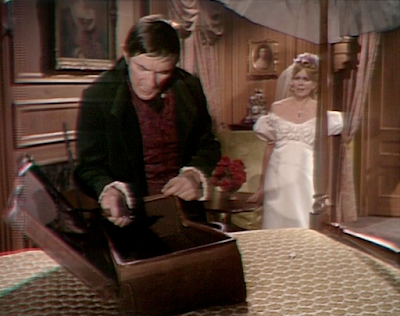 Barnabas and Ben go downstairs, and the doors slam shut. She tries to get out, but the door is locked. She turns to see Jeremiah's ghost in the room with her. She asks why he's haunting her. He explains that she summoned him from his grave, disturbing his rest. She tells him to return to his grave, as she no longer needs him. He says she must be punished for disturbing the dead. He walks towards her, and she cries out. 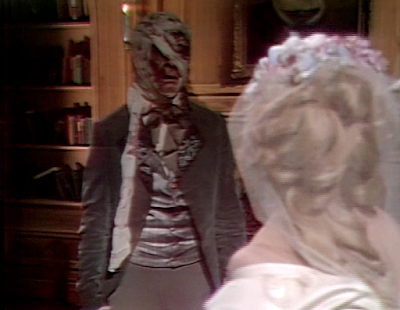 Downstairs, Barnabas apologizes to the reverend. Ben asks if he should get her, and Barnabas says no. 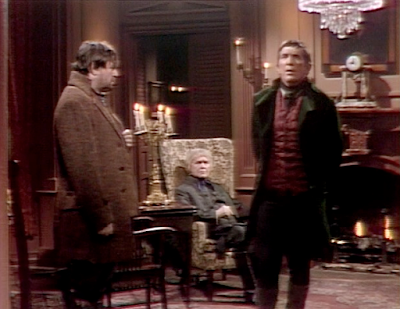 Jeremiah carries Angelique's unconscious body through the graveyard. He places her body in his open grave. She wakes as he tells her that she will learn what it is to be one of the living dead. John: What an exciting way to kick off the new year! Funny how much more proactive Jeremiah is as a zombie than he was as a mere mortal.

Christine: He certainly laughs a lot more as a zombie. I thought perhaps he realized Angelique was the witch who caused all the trouble that led to his death, and was planting the doll and pins to expose her to Barnabas, so it was disappointing to find out he was just grumpy because she disturbed his rest. We sure have come a long way in a year on Dark Shadows.

John: Strange turn of events for Vicki to just dump the truth on Barnabas. You'd think a more strategic plan might have been called for—perhaps sharing the Collins' history she brought back with her? Of course, Barnabas has a lot on his mind right now, so perhaps he'll forget her fairy tale. Perhaps.

Christine: She is really setting herself up to look guilty of witchcraft. It's interesting that Barnabas trusts Angelique so implicitly that he readily believes her when she plays dumb about the pins found with Sarah's doll in her suitcase, despite coming up with the magical cure for his sister's mystery illness. Either Barnabas is not a bright bulb or she's really got him wrapped around her little finger. If she survives her premature burial, she'll surely find a way to pin that evidence on Vicki.

John: The in-grave POV they used to close out the episode is not so much scary as silly, given that it looks more like Jeremiah is just upside-down. 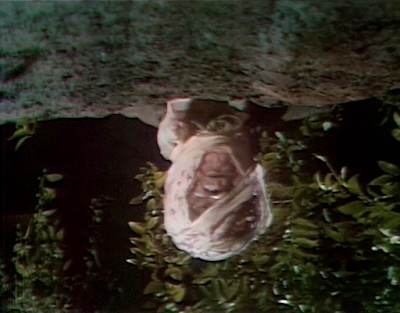 Christine:  I had a good laugh over that. It looks silly because she should be seeing him from the side. He would appear upside down to her if he'd been standing at the head of the grave. I think she should have seen him like this: 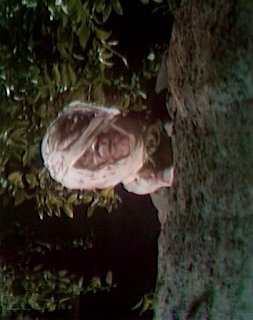 Christine: Was Jeremiah's name spelled wrong on his gravestone, or have we been spelling it incorrectly all this time? I like the cool skull design. 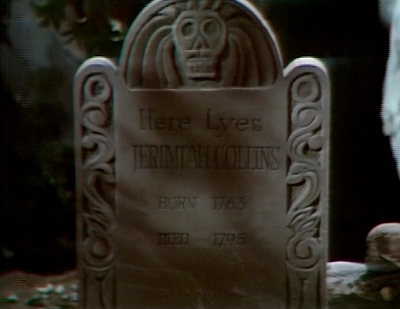 If only Abigail had been there when Barnabas discovered the doll and the pins. It might have made her decide she was right the first time about Angelique.

Doesn't that gravestone remind you of the ones seen in the old opening to PBS' "Mystery" show?

Hadn't thought about it at the time, but it does have a bit of an Edward Gorey look to it!