The Countess finds Josette in the drawing room. Josette tells her that she's leaving Collinwood in an hour, and she can't explain why. The Countess asks what Barnabas said to her. She says that nothing anyone says or does will stop her from leaving. 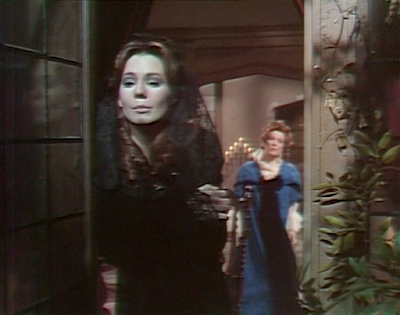 The Countess suggests that the only danger appears to be Barnabas. She says if Josette is leaving, she'll go with her. She sends Josette to her room when Abigail enters. She starts talking about Reverend Trask and the trial of the witch. The Countess stops her and says she needs her to explain to her brother that she and Josette will be leaving Collinwood tonight. Abigail is shocked. She says they're all counting on the Countess to be a witness at the trial. She says there are plenty of other witnesses, and she goes upstairs to pack. 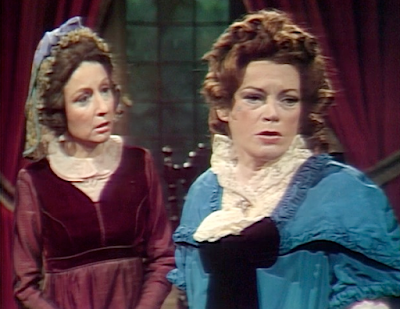 Josette listens to a music box. Barnabas tells her it was going to be a wedding gift, and he wants her to keep it with her. 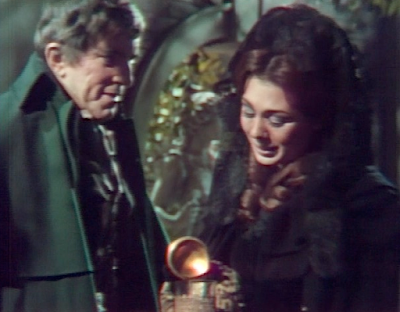 She says she's worried about him. He says things will be fine after he does what he needs to do. He will see her in Boston soon. She asks about his marriage to Angelique, and he says the next time she sees him, they will not be married. With a kiss, he sends her off to her carriage. 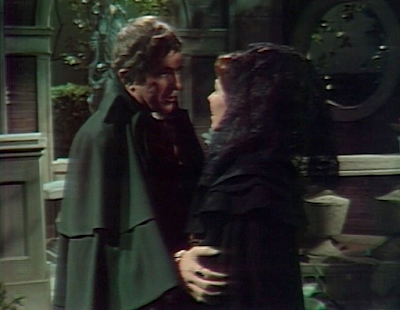 Abigail visits Angelique at the old house. She asks why there's a portrait of Josette above the fireplace. Angelique explains that Barnabas hung it over her objections. 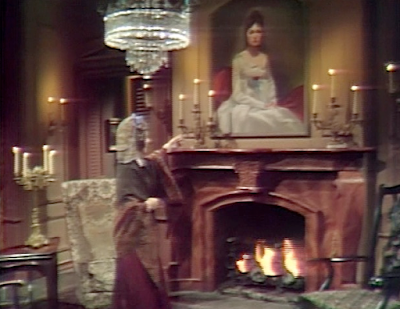 Abigail asks if Angelique will still appear as a witness at Victoria's trial. She says that Josette and her aunt have left Collinwood. Angelique is shocked. She asks where they went, and why. Abigail tells her she does not know, and notices that Angelique appears upset. 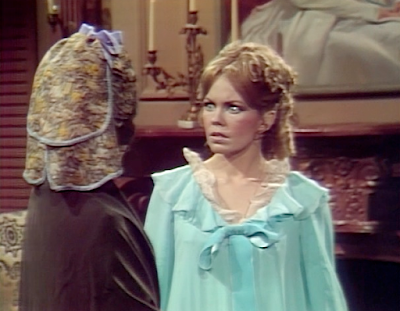 Barnabas comes downstairs as Abigail leaves. He leaves a box by the staircase. Angelique tells him he's made a great mistake trying to betray her. She says Josette will not be safe just because he sent her away. She tells him to look at the portrait, and he watches as it transforms into a ghoulish rendition of Josette. 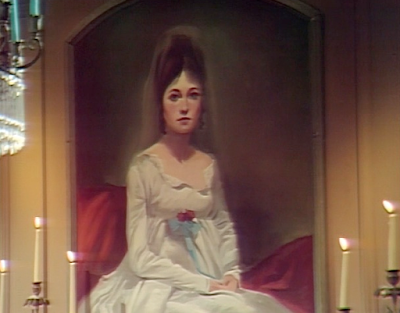 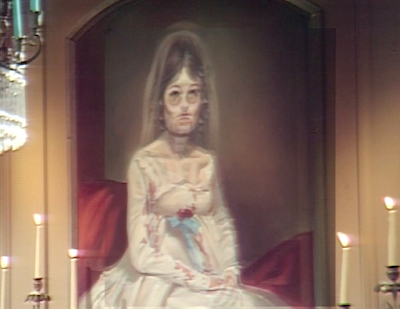 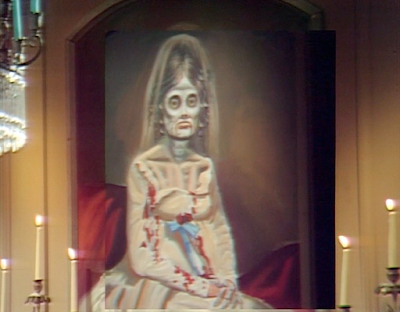 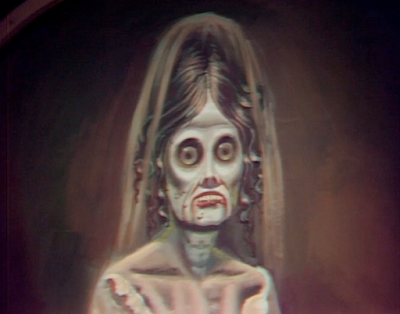 He says her powers are limited to making the portrait appear different, since she doesn't know where Josette is. Angelique says she'll force him to tell her. He says if she forces him to do anything, he'll never be the faithful husband she wanted him to be. She calls him foolish. She says that Josette may be safe, but no one else is. He asks what she means and she runs upstairs. 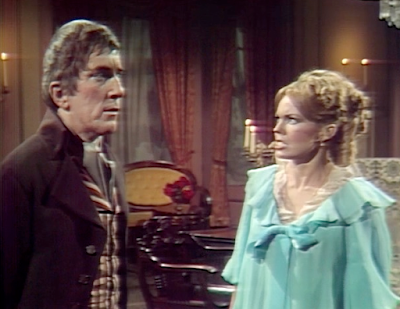 He opens the box he brought downstairs, which contain his dueling pistols. Angelique comes back downstairs with Sarah's doll. She stabs it with needles. 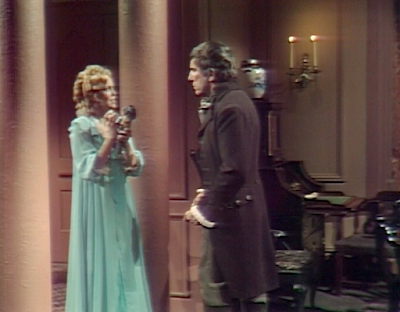 He pleads with her to remove the pins, promising to do whatever she asks. She says Sarah will die if he deceives her again. Barnabas pulls one of his dueling pistols and shoots her. 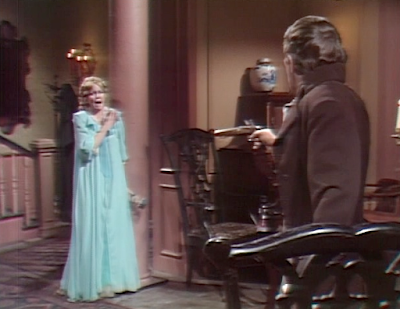 He grabs the doll and removes the pins from it. Angelique tells him he didn't do the job well enough, and as long as she lives and breathes she will have her revenge. She places a curse on him, telling him that he will never rest, and never be able to love anyone through all eternity. 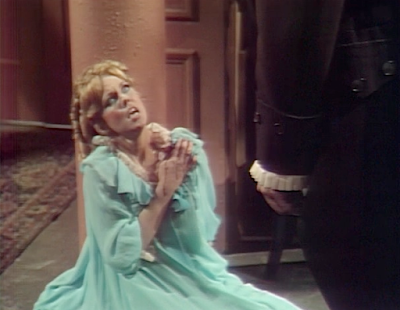 She falls down, dead. A window breaks, and a bat flies in. It attacks Barnabas, biting him on the neck. 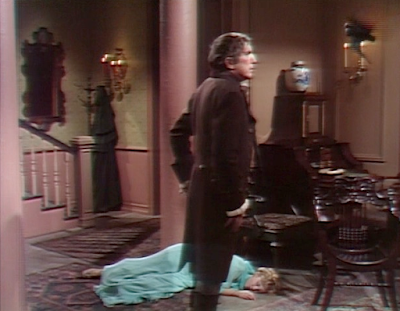 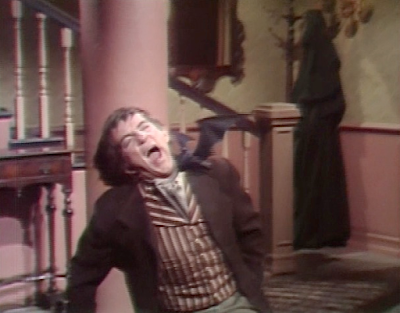 John: I love how strong Barnabas is when finally standing up to Angelique. And to think, it almost worked.

Christine: I loved the transformation of Josette's portrait. That was an interesting effect.

John: And now we know where they got the look for the aliens in John Carpenter's THEY LIVE!

John: The deed is done! The vampire curse has been inflicted on Barnabas Collins! I can't wait to see him roaming the countryside in search of blood!

Christine: That is likely to cause problems at Collinwood.

John: The epic finale of today's episode was marred somewhat by the appearance of the bat-fisherman and his pole. 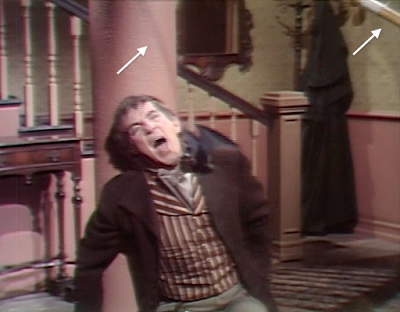 Christine: It was so fleeting you would have missed it if you'd blinked. Can we just enjoy the moment? I think they did pretty well keeping that string hidden through most of the shot. Admittedly, I did laugh a little over Bil Baird's puppet bat inspiring so much terror in Barnabas, because it is so cute. Props to Frid for acting so terrified with a bat on a string at his throat. What a great episode! Next week should be interesting. 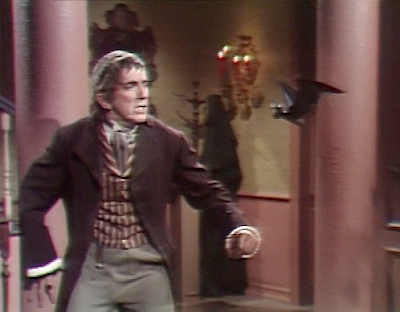 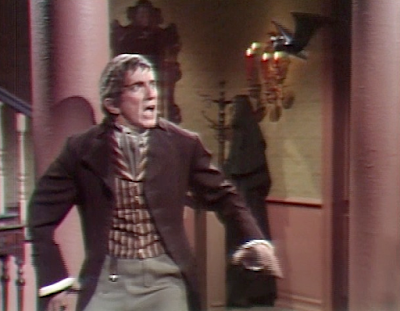 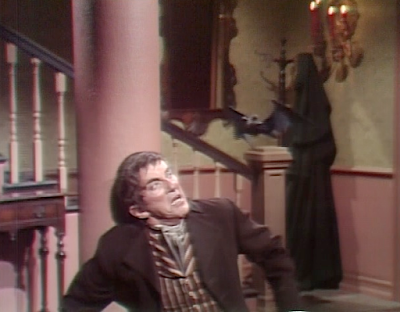 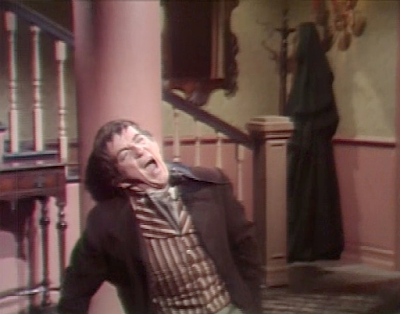 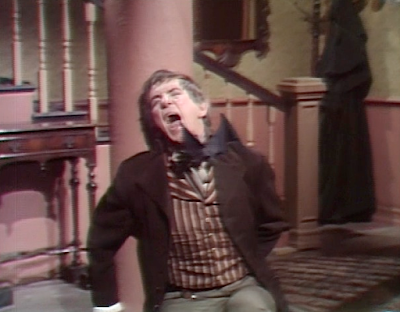 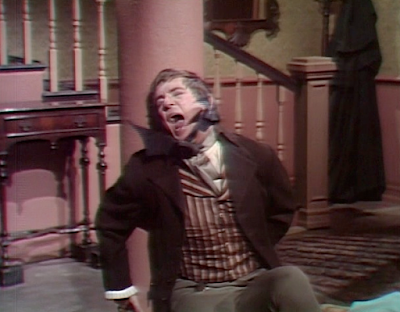 Probably my favorite episode of the entire series (so far). Certainly one of the key ones in terms of the overall story line. All the characters hit just the right notes. It was a bit surprising to see Clarice Blackburn appear to struggle a bit with her lines, but like the old pro that she was, she recovered nicely. The bat attacking Barnabas at the end was a huge surprise and a very shocking thing to see in 1968 daytime TV.

Before the bat supposedly crashed through the window, one can see its shadow INSIDE the room. It looks like someone is making sure it’s working right. But none of that takes away from the great storytelling this entire week. The show has risen to a new peak!

I wonder if they intended the cloak hanging behind Barnabas and our special-guest-bat to invoke the idea of the Grim Reaper? If so, it was perfectly eerie!

Great observation, Jeff! I hadn't noticed that before, but now that I've seen it, I can't NOT picture that in those screenshots.