Julia and Morgan go to the tower room and find that Gabriel is no longer there. Morgan notices sheets tied together and hanging out the window. He says he'll go after him. Julia says that they have to have the lottery again; someone must stay in that room tonight. Morgan says he didn't have any money, so he couldn't have gone far. He suggests that he went to Bramwell. Julia says he wouldn't help Gabriel, and Morgan says Bramwell would do anything to spite him. Julia says that she'll go talk to Bramwell, and tells Morgan to check if a horse is missing from the stables. 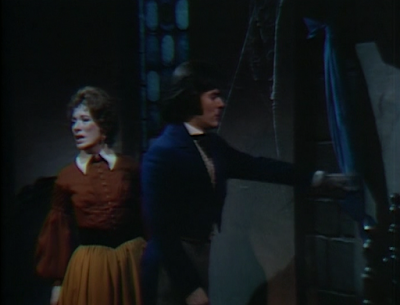 Daphne stands at the window and tells Bramwell that she sees Gabriel rushing by on a horse. He tells her not to speak of Collinwood. He says that Catherine was lured into that house. Daphne tells him that he's being unfair to Catherine. He tells her that she's a sweet tender child, and she assures him that she's a woman; a young woman — but a woman. He realizes that she is. He asks her about her life since he went away. She explains that she grew up. She says she doesn't have any more freedom; not like if she was a man. He tells her to marry her sweetheart. She tells him that she doesn't have one. She says she went out with Gerard Stiles for a while, the man with psychic powers. She says he taught her to read palms, and she offers to read his. She tells him that she sees happiness in his future. 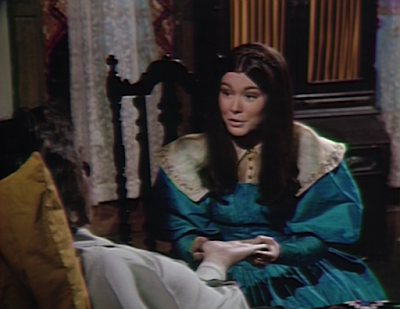 There's a knock on the door, and Julia comes in. She asks if Gabriel came by. Daphne says that she saw him ride by. Julia explains that the held the lottery last night, and Gabriel ran away. He realizes that she thinks he was helping Gabriel. He tells her to tell Morgan that he would have helped Gabriel if he asked for it. He tells her to have Morgan and Quentin draw again. Julia explains that the women are in the lottery as well. She asks Bramwell to keep Gabriel there if he does come to see him, to prevent Catherine from being part of the lottery. After she leaves, Bramwell tells Daphne that if Catherine wants to be a Collins, then they should let her draw. 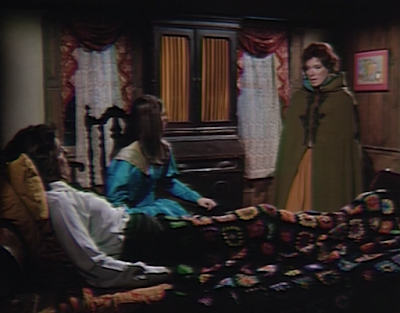 Morgan tells Catherine that a horse is missing. He says if they can't find him, one of them may end up having to go into the room. She assures Morgan that he will find Gabriel. Julia returns and tells them that Gabriel hadn't been to the old house, but Daphne saw him riding by on a horse. Morgan asks what she's doing with Bramwell. She explains that she's helping treat him. Bramwell tells Catherine to get her sister back to Collinwood, reminding her that Bramwell is his enemy. Julia reminds him that she'll be exposed to the plague at Collinwood. Morgan points out that if Julia saw her, she's already been exposed. Catherine says that Daphne may have been exposed, but the people of the village have not. She says that Morgan can't go to the village. Morgan says he must get Gabriel into that room tonight, if it's the last thing that he does. 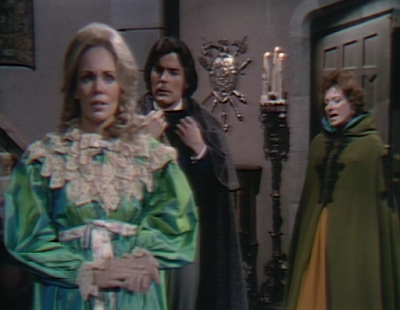 Gabriel is in the Eagle drinking when Morgan arrives. He tells Morgan to sit down with him. Gabriel says that he didn't have to stop at the Eagle. He says he wanted them to find him. He adds that he knew he couldn't get away, and that he'd have to go into the room. He says he knows that he's going to die in that room. He says he's willing to do it now. Morgan says he doesn't trust him. Gabriel assures him he's not planning any more tricks. He says maybe he won't die, and he'll be the one to end the Collins' curse. 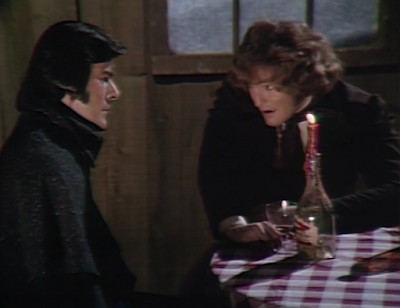 Daphne tells Catherine she can't believe she doesn't want her to help Bramwell. She says it doesn't look proper. She reminds Daphne that Bramwell has caused problems since he returned. Daphne says Bramwell is kind and gentle, and needs a friend. Catherine warns her of Bramwell's charm. Gabriel and Morgan return. Gabriel is drunk. He tells Daphne that the kiss of a woman on a condemned man's lips assures his soul of eternal peace. He leans in to kiss her, but Morgan grabs him and pushes him into the drawing room. Julia asks if he's aware of what's going on in the house. She asks if he knows Melanie and Quentin are dying because of him. He gets up to attack her, and Morgan throws him back into his chair. Julia says that when it gets dark, she plans to take him to the room herself. 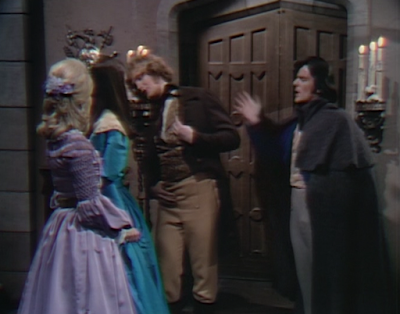 At sundown, Morgan tells Gabriel that it's time to go. He and Julia follow Gabriel upstairs.

They arrive at the door to the room. Gabriel says his last goodbyes to Morgan and Julia, and goes into the room. Morgan locks the door behind him. 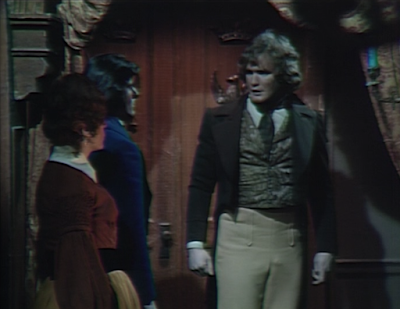 John: It's almost fitting that Gabriel ran away as fast as he could, just so he could have a few drinks at the bar. Sadly, he had no one to drink with, as they couldn't even afford to hire a bartender for today's episode!
Christine: It would have been nice to see bartender Bob Rooney make another appearance, but it seems that all extraneous costs are being cut as the show winds down.
John: Have we seen the birth of a romance between Bramwell and Daphne? It was pretty creepy when he 'realized' that she too was a woman. Lest anyone forget, Bramwell is not quite the romantic the Barnabas was... 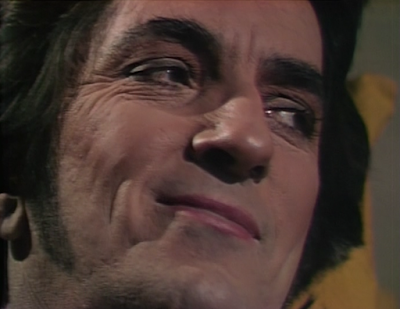 Christine: Bramwell was looking rather pretty today as he recuperated under Maggie's afghan with a flattering shade of lipstick and eye shadow.
John: How cruel for Flora to take the day off to avoid having to say goodbye to her son! What are the odds that we see anything happen inside the room tomorrow? Or that nothing ends up happening to Gabriel? Maybe we'll find out that the trick to survival is being drunk!
Christine: I think the odds are good that the room will remain a mystery to us. Let's at least hope that Gabriel took a flask with him and will live to tell about it, if nothing else.
Posted by John Scoleri at 6:00 AM