Bramwell throws Catherine into his room. He says he won't let her out until she comes to her senses. He says he will never let her marry Morgan, and forces himself on her. She demands to be set free. He says she can leave when she agrees to marry him. She says that Morgan may kill him for doing this, and Bramwell says that he will kill Morgan if he has to. 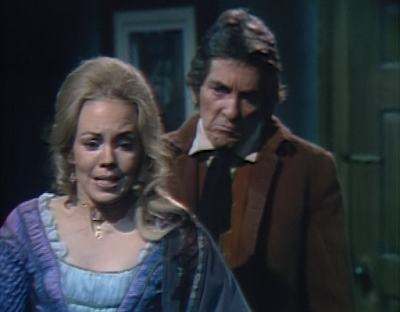 Melanie is shocked that Catherine and Morgan are planning to marry tonight. Quentin says that Catherine felt they deserved some happiness before the lottery, and their mother agreed. Morgan comes in, and Quentin says the minister is downstairs in the drawing room. Morgan wonders where Catherine is, and suggests that something is wrong.

Morgan leaves and a stranger sneaks into Collinwood. The stranger hides when he hears Quentin and Melanie come downstairs. Quentin tells her that Catherine and Bramwell have been through for a long time. When they go into the drawing room, the stranger sneaks upstairs. 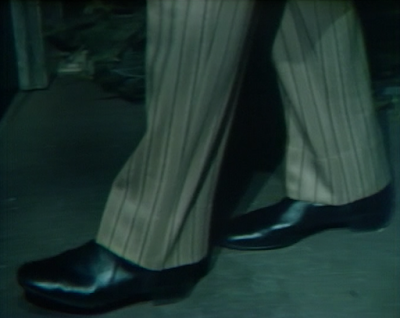 Catherine tells Bramwell that Morgan is sure to come looking for him. She tells Bramwell how stubborn he is. He reminds her of their first meeting. He says from that day on they knew, and she agrees. He kisses her, and she asks him why he's done this. He tells her that he loves her. He says her that he'll let her go if she says their past means nothing. She says she can't do that because she does love him. They embrace.

The stranger is rifling through drawers in Collinwood when Melanie walks in on him. She asks who he is, and calls for Quentin. He explains that his name is Kendrick Young, and he's not there to steal anything. She realizes that he's Stella's brother. He tells her he's looking for clues to his sister's whereabouts. She introduces herself. She asks why he doesn't believe what they've said about his sister. He says it's possible she's still in Collinwood. She tells him not to listen to gossip from the village. He thanks her for listening to him. He asks her when he last saw his sister. She says it was the day before she left Collinwood. He tells her that he'd like to meet her again. She offers to sneak him out of the house. 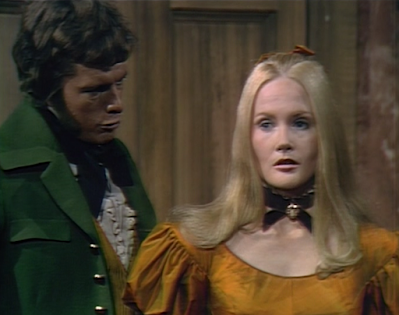 Morgan returns to Collinwood and tells Quentin that he was right — something happened to Catherine; her carriage is still parked by the gate. Quentin says that means she's still on the estate. Quentin says that Flora told him they ran into Bramwell. Morgan grabs a gun and goes to see Bramwell. Quentin stops him, saying that he'll handle things peacefully. He makes Bramwell give him the gun, and leaves.

Catherine lies on Bramwell's bed as he gets dressed. He asks if she's angry with him, and she says she has no reason to be angry with him. She tells him it makes no difference. She points out that he also loves Morgan, and she's going to marry him. She says she'll find the life she wants with Morgan, and Bramwell must accept it. 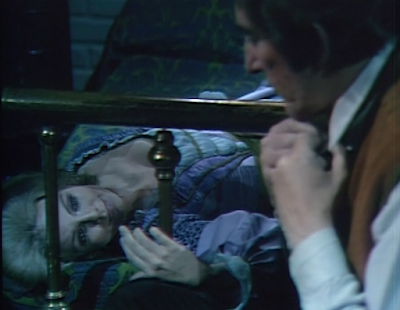 Quentin goes to the old house where he finds Bramwell. He asks where Catherine is. Bramwell says he has no idea. Quentin says he'll search the house. He tells Bramwell that he can't stop them from getting married — he can only postpone it. Bramwell refuses to cooperate. Quentin pulls a gun, and threatens to shoot Bramwell before going upstairs. 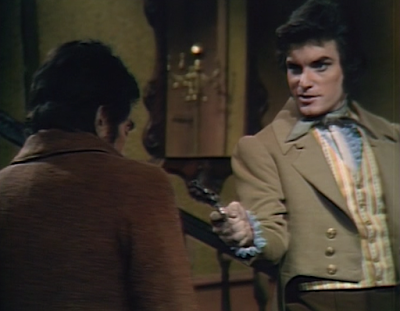 Quentin comes downstairs with Catherine. She looks at Bramwell, and then leaves with Quentin. Bramwell knocks over a table.

Quentin finds Melanie in the foyer. She points out how large the house is. He offers to take her up to her room, and she tells him that she knows the way.

Catherine is in bed asleep when someone sneaks into her room. It's Melanie. She raises a knife, and is poised to strike. 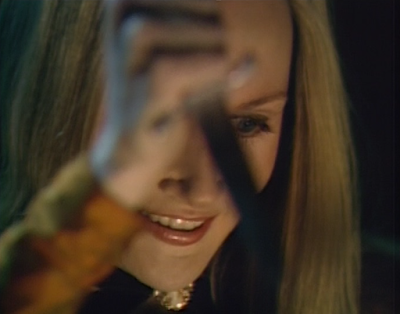 John: As the episode started, I though that perhaps I misjudged Bramwell yesterday. But a short while later, it appears that he had in fact had his way with Catherine, perhaps not as against her will as it originally seemed to be playing out.
Christine: It was subtle, but him adjusting his necktie while she was splayed out on the bed looking blissed out made it pretty clear there was some hanky panky going on.
John: I had forgotten about Kendrick. Frankly, I had forgotten about Stella. And if he were to get dispatched quickly, I think we'd all forget about him, too. It sure doesn't seem like there's a lot of meat on the bones of the 'what happened to Stella' storyline. I imagine if he develops a relationship with Melanie, his entire reason for coming to Collinwood in the first place will be quickly forgotten.
Christine: I also had forgotten about those two characters and it got me wondering again who in the house did her in, with the obvious choice being loco Justin.
John: Seeing Melanie standing over Catherine's bed with a raised knife reminded me of the scene where Samantha snuck into Daphne's room to 'scare' her...
Christine: Seeing Melanie act deranged after finding out she entered the cursed Room to retrieve Justin, along with the fact that Stella's last words were asking what someone was doing with a knife, makes it pretty clear that Melanie may be suffering the same malady Justin acquired from his night in the Room, and she may be the one responsible for doing away with Stella.
Posted by John Scoleri at 6:00 AM