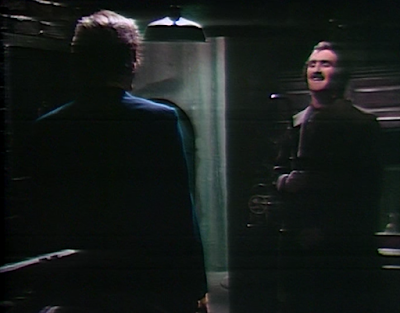 Whistles are heard outside Cyrus' lab, and Yaeger enters. He says he needs the antidote to be Cyrus again before the police arrive. Quentin comes in and introduces himself to Yaeger, who is opening the safe. He asks him where Cyrus is, and Yaeger says he was going to ask him the same thing. He sees the open safe and asks where Cyrus is again. Yaeger says that Cyrus can explain everything. Quentin doesn't believe him, and asks where Cyrus is once again. He says he's going to keep asking until he has an answer, or until Cyrus walks down the stairs. 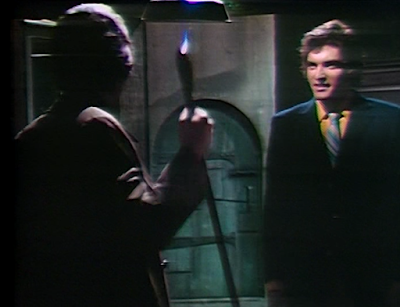 Yaeger tells Quentin that he's persistent. Quentin asks Yaeger how long he's known Cyrus. Yaeger tells him that Cyrus can tell him when he gets back into town. Quentin brings up the check signed yesterday by Cyrus, and asks if he'd like to explain it to the police. Yaeger dares him to call the police, and when he goes to do that, he runs into a room and locks the door. He takes the potion from the safe from his pocket. 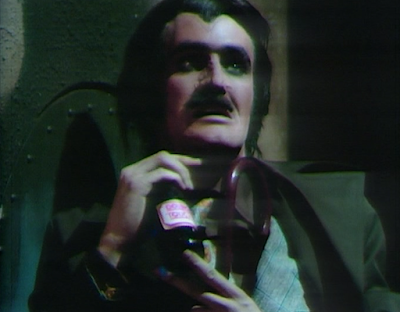 Sabrina comes downstairs and Quentin asks her to unlock the door. She does and there's no one there. He tells her that Yaeger was there, and he has a key to the door. He tells her that after meeting Yaeger, he's concerned about Cyrus' safety. She says that something must have happened to Cyrus when they hear a door shut, and Cyrus come downstairs. He asks Quentin what brings him to the lab at this time of the night. Sabrina says she couldn't reach him at his regular hotel in New York. He says he was in Portland. 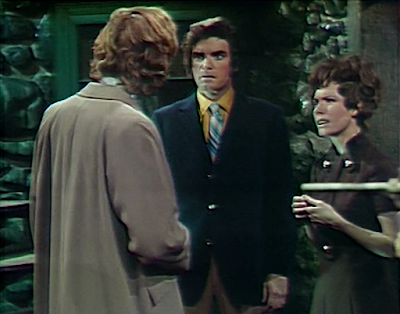 Quentin asks him if he knows John Yaeger, and he says that he is. Quentin says Yaeger let himself into Cyrus' lab with a key. Cyrus says he gave it to him. Quentin asks if Yaeger is one of his friends. Cyrus explains that he was an ideal subject for his experiment. Quentin asks him about the check Yaeger had, and he says he gave it to him the day before, post-dated. Quentin finds it difficult to believe he would associate with such a man. Cyrus admits that Yaeger is unique. Quentin asks what kind of hold Yaeger has on him, promising not to let what he says go beyond his doors. He asks if Yaeger is blackmailing him. Cyrus says his relationship is professional, and while he appreciates their concern, he could end his relationship with Yaeger at any point that suits him. Quentin says that if he's right about Yaeger, Cyrus should feel free to call him. Cyrus tells him that he doesn't think that will be necessary. 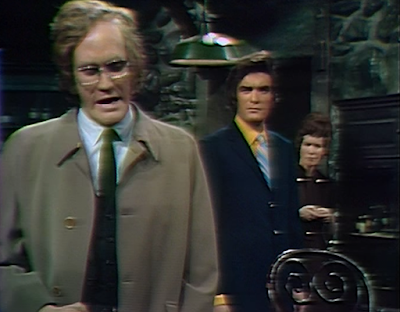 Quentin leaves, and Sabrina asks him to tell her what truly happened. He assures her that he was with friends in Portland, and he came back early because the experiment failed. He adds that something exciting happened, that he'll share with her when the work is more complete. She asks if it's necessary for him to associate with Yaeger. He yells at her that he can handle him. He then apologizes for snapping at her. He reminds her that his professional life is his own. He tells her that Yaeger will be back, and she should have nothing to do with him. 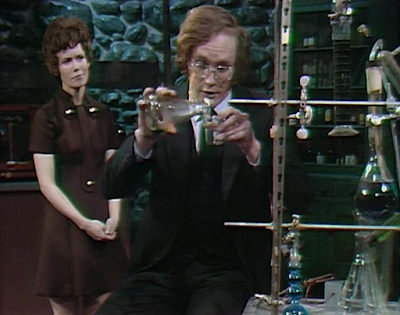 Bruno comes downstairs and says he has to talk to Cyrus. Cyrus asks Sabrina to leave them and she does. Bruno tells him that Dameon Edwards, who Cyrus describes as Angelique's playboy friend, had died, and he has seen his ghost. He says he's come back to haunt him. Cyrus asks why Dameon's ghost would want to haunt him; suggestively asking if Bruno had something to do with his death. Cyrus suggests that he go to Hannah Stokes for an exorcism, and Bruno says she refused to help him. He tells Cyrus that he can't refuse him. Cyrus says there's no guarantee he could succeed. Bruno begs him to try, and Cyrus tells him to give him time to think it over. Bruno goes up to his room to wait for him. 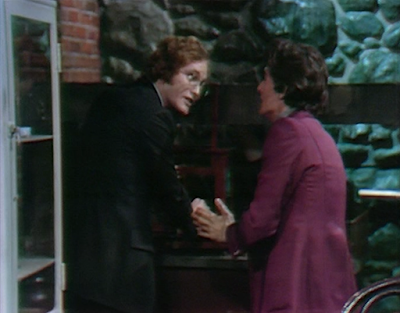 Quentin returns and Alexis says she's glad that he's back. He asks her where Trask is, and she says he's in the house. She tells Quentin that the house is quiet, like the calm before the storm. She says she feels that they're all doomed. 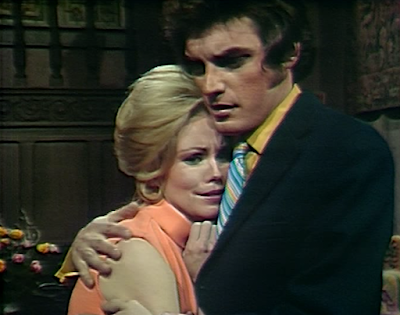 Bruno is in his room, freaking out. He lights a cigarette and sees Dameon Edwards in the mirror, laughing. Bruno begs him to stop, and a wall of flame appears in the room with him. He calls for Cyrus to help him. He says the room is on fire but the door is locked. Cyrus breaks in and tries to put the flame out with a blanket. He tells Bruno to help him. Together they extinguish the fire. Cyrus tells him to come downstairs for a drink. 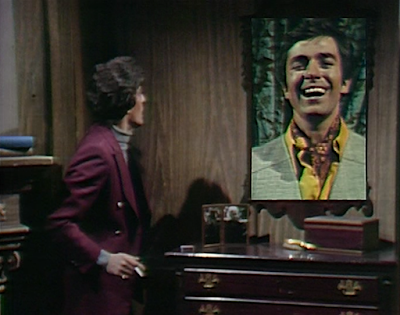 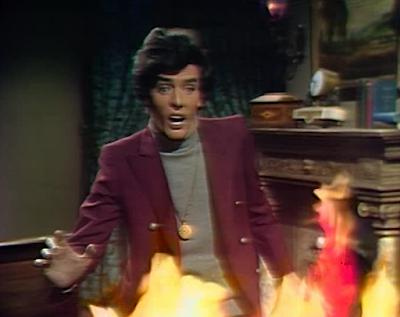 Quentin gives Alexis a drink and suggests that she should go into town for a few days. She tells him they should stay and fight whatever it is. She then asks if he's heard from Maggie. He says he's planning to call her tonight and ask her to come back. Alexis asks if he thinks she'll have the same reaction to her that she did the first time. They gaze longingly at one another, and she says she's going up to her room. He bids her goodnight. 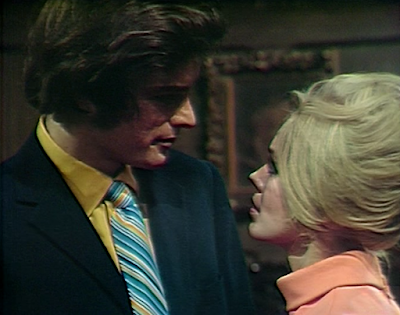 Bruno tells Cyrus that he can't help him. He says he thought he'd be safe here. He says if the ghost could follow him there, it can follow him anywhere. He says he knows who brought the ghost back—Angelique. Cyrus says his obsession is tiresome. Bruno reiterates that he thinks Alexis is Angelique back from the dead to avenge her murder. Cyrus asks if he's her murderer. Bruno says he's not. He says there's only one way he can handle this—by having a direct showdown with her. He runs out of the lab. 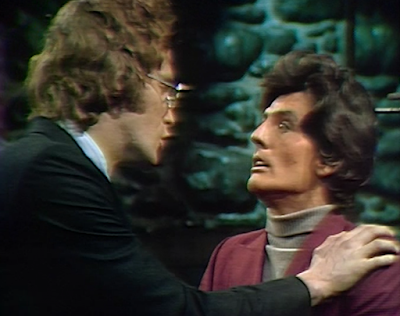 Quentin asks Jennifer is Maggie is still living with her. He asks how much longer the childishness is going to go on. He asks her to tell Maggie he misses her, and hangs up the phone.

Bruno comes into Alexis' room and accuses her of being Angelique, back from the dead to avenge her murder. She tells him that he's gone mad. He adds that this is why she brought back Dameon—because she knows how he died, and thought his spirit would scare him into admitting that he killed her. She tells him to leave and he says not until he proves what she is—a living dead person! She asks how he plans to prove that and he says that if she's really dead, she can't die again, and begins strangling her. 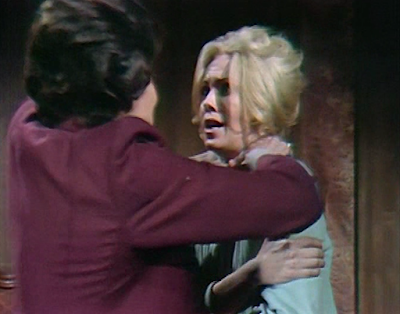 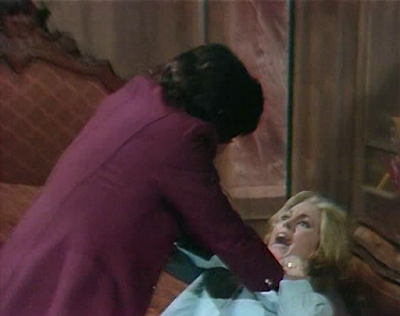 John: Just as Yaeger has done things that go against his evil nature, Cyrus is doing a lot to make it clear that he's also not a very nice guy. I guess the amnesia factor is gone with his new and improved potion. Why would Cyrus be so willing to keep becoming Yaeger now that he knows what he truly is? 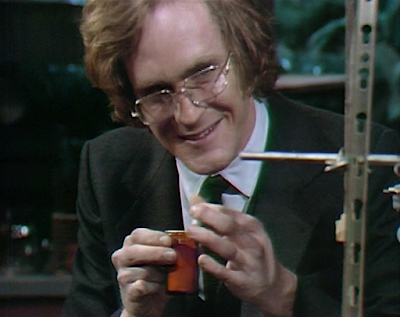 Christine: I disagree with your assessment that Yaeger has acted in a way that betrays his evil nature, though if you're right, it could be due to the influence of Cyrus' good nature. It seems that Cyrus has been infected with John Yaeger's evil persona, which may have something to do with his increasing desire to explore his dark side. 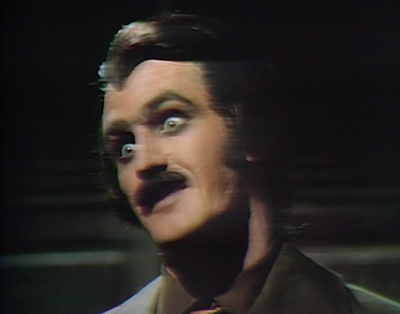 John: I'm looking forward to finding out more about Angelique's playboy friend Dameon Edwards. And why he was able to set Bruno's room on fire. The funniest thing was how Bruno cried like a baby, and it took Cyrus telling him that he could help put the flames out to do anything but stand there and whimper.

Christine: Angelique is our resident firestarter, so I'm guessing it's possible she had something to do with it, especially since Bruno believes Angelique may have brought Dameon back. 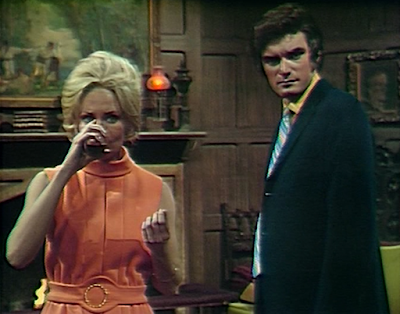 John: I'd love to know how Bruno is constantly able to sneak right into Angelique's room. He really is destined for the looney bin if he thinks he'll prove Alexis is Angelique by confirming that she can't die twice. Like many a great witchcraft test, if the failing result of the test ends up with the subject dying, it's not particularly effective!

Second Down for the Count:
Barnabas was chained in his coffin 16 episodes ago. 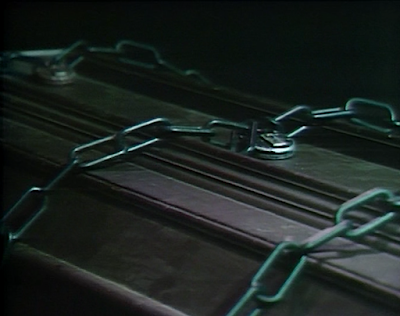