In the cemetery, Quentin finds Daphne. He tells her that she's beautiful, and they embrace. Daphne raises a knife behind his back. He tells her that he feels as if he's known her all his life. She lowers the knife and turns from him. He says he'll do anything to put her at peace. She disappears. He calls for her to come back. He finds a knife on the ground near his feet. 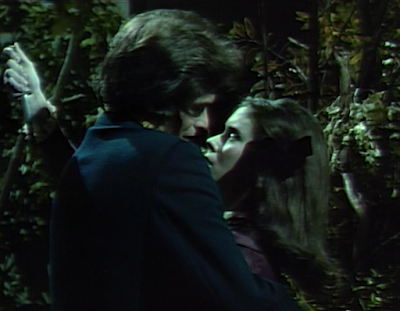 David goes into Hallie's room, and sees her wearing the dress she said she was going to put in the attic. She asks him if something has happened, and he tells her that he found clothes from the same period on his bed. She asks him to put them on, saying that she wants him to, and the woman does, too. He says he doesn't want to, and Hallie runs out of the room, saying he doesn't want to make her happy. 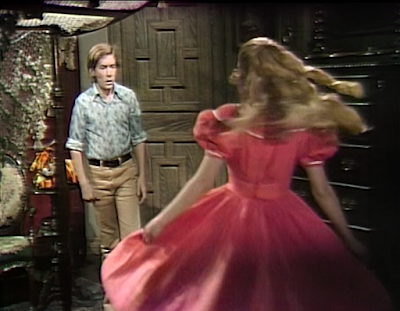 Quentin returns to Collinwood, and Julia asks him about the picnic he went on. She points out the picnic was mentioned in Carolyn's note. She asks if anything happened, and he says no. She tells him that she still feels Gerard's presence. Quentin asks her if she feels anything else. She says no, but expresses concern that they're getting closer to the destruction of Collinwood. Quentin suggests that they hold an exorcism tonight. 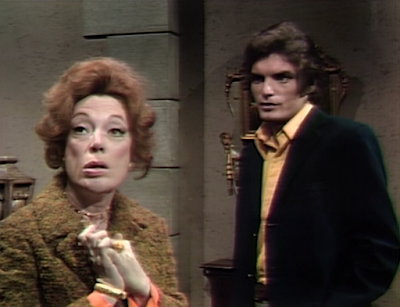 David finds Hallie in the playroom. He tells her that she shouldn't have come there. She says she's going to be punished. She says she went to Gerard's ship today, where she saw him kiss Daphne in his cabin, and now they're both angry with her. He calls her Hallie, and she reiterates that Hallie is not her name. Daphne enters the room, and David says they should leave. Hallie tells Daphne that she didn't mean to see them. She says if she doesn't believe her, to go ahead and punish her. David tells Daphne to leave Hallie alone, but Hallie thanks Daphne for believing her. Daphne extends her hand to David. 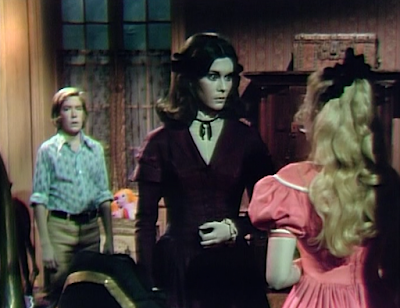 Quentin comes into the foyer with a tree branch. Julia asks if they should tell Barnabas, and he says that they don't need him. He says if the ceremony is a success, there could be a great disturbance in the house before it is over. They step outside, and Quentin, addressing no one in particular, suggests the time has come. He begins an incantation. 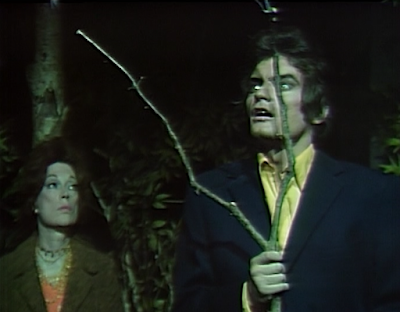 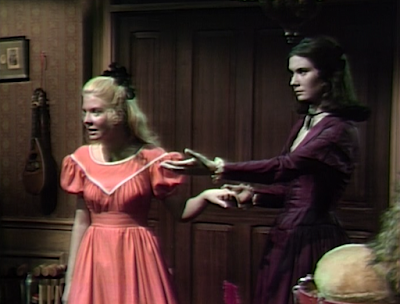 David reaches for Daphne's hand, but she withdraws it at the last minute, and disappears. Hallie says there is someone else present who is going to punish them. David tells her they're the only ones there, but Hallie screams and collapses. 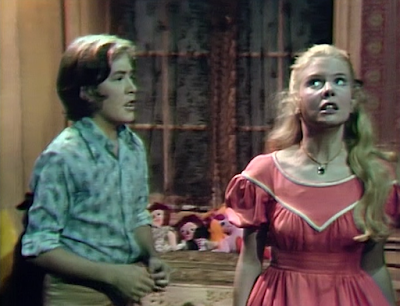 Quentin continues his exorcism, demanding the things cast thyselves back into the outer darkness from whence thee came, in the name of the lord... He tells Julia to wait there, and goes back into the house. He sees Daphne at the top of the stairs.

Hallie comes to and says she hurt her arm. She asks him what she's doing in the dress. He says he doesn't know. He says they have to figure out where the room came from, and who Daphne and Gerard are. He takes her downstairs to see Julia. 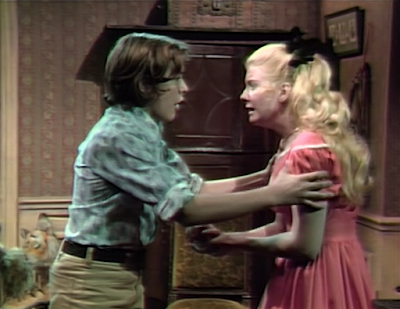 Julia comes into the house and finds Quentin standing alone in the dark. She asks him what's wrong. He says there's nothing he can do. He expected some reaction from the ceremony. He asks her if there are spirits at large in the house, he doesn't think they mean anyone any harm. Julia asks him why he stopped the ceremony when David comes downstairs with Hallie, wearing a contemporary dress. He says she hurt her arm, and they want to be sure it isn't broken. She sends them into the drawing room, and tells Quentin that the spirits were aware when he did the exorcism, and caused Hallie's accident. He tries to convince her that it's a coincidence. She says she has no proof, but a strong conviction that she's right and he's wrong. 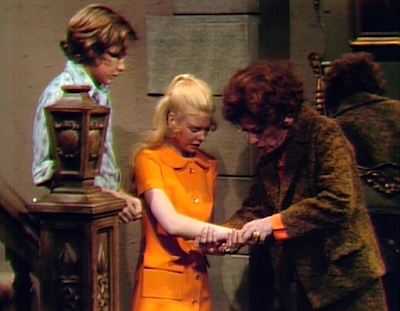 Later David and Hallie return to the playroom. She asks why they had to come back. He tells her there's a way to find out what they want to know. He tells her they're going to hold a séance. He lights a candle and they sit at a table together. David calls to the spirits who know about the playroom. They hear young voices calling to let them live. 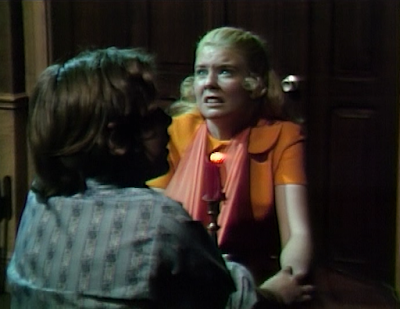 John: What the hell was going on with Quentin's divining rod? And where did he get it, the kitchen? I'm glad we don't have an exorcism tracker, as today's would have to be considered an embarrassment to the field.

Christine: Oh, I've got you covered on the exorcism tracking. The last time an exorcism was performed was by Professor Stokes in Episode 693 in an attempt to rid the house of Quentin's ghost, so it is quite funny that Quentin took it upon himself to use what is likely the same forked branch to conduct an exorcism today. Prior to that, Reverend Trask also used a forked branch in Episode 400 to conduct an exorcism, though he had a little more flair and lit his on fire.

John: Ah, Julia. Gotta love her conviction! And also, her making an excuse for Barnabas, who clearly had the day off today, and wouldn't be available to participate in Quentin's sham-exorcism.

Christine: Where the heck is Barnabas? Did someone lock him in his coffin again? I think the catastrophe happened at Collinwood because both he and Julia kept taking days off when they needed to be using the clues to prevent the calamity.

John: We interrupt our Catastro-tracker to bring back our séance tracker! And our first fully pre-teen séance at that! Or teen séance? Do you think that David and Hallie will end the week as themselves, or as Tad and Carrie?

Christine: When trackers collide! Weren't David and Amy pre-teens when they conducted a séance in Episode 640? If Amy were around, she certainly would have reminded David about what happened the last time they got involved with evil spirits in the house. It seems likely that we won't be seeing David and Hallie next week as their counterparts sound ready to step in. 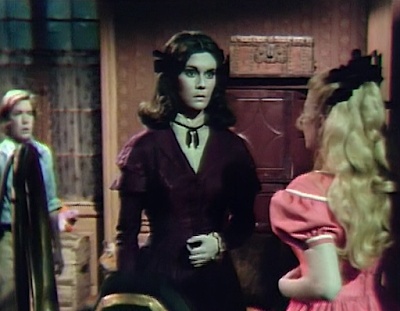