David finds Hallie outside the playroom, and she tells him she had a dream about Rose Cottage. He says he had the same dream. They go inside and find a dollhouse—which looks like where they were in their dream. She asks him what it all means, and he says he doesn't know. He points out the dollhouse wasn't there before. He wonders how it got there. She wonders how they could have the same dream. They realize that the house is Rose Cottage. David says it looks more like a mansion than a cottage. 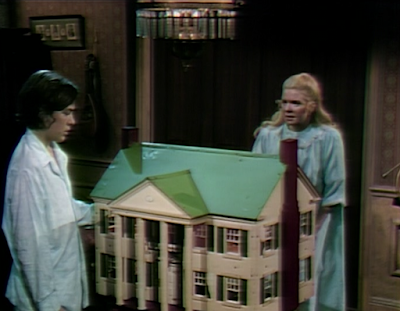 Professor Stokes is reviewing old texts when Hallie comes into the drawing room looking for David. He tells her that he's there to see Julia, but he asks to talk to her. He asks her if something has made her unhappy at Collinwood. He says she didn't seem herself when she came to see him the other day. She says she feels fine. He reminds her that if something frightened her, she could tell him about it. She says the adults in the house are all afraid of something, but no one knows what. She says that Elizabeth said everything will be alright based on Sebastian's horoscope. He sends her on her way, and decides to go visit Shaw. 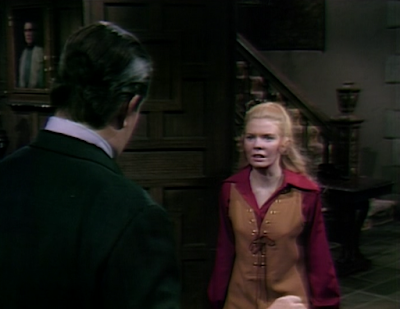 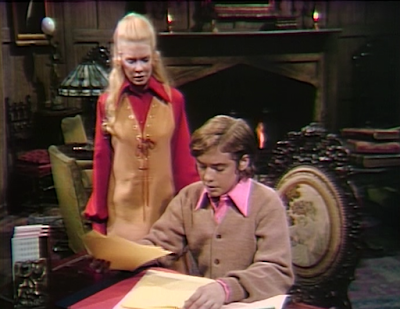 Shaw is meditating when someone rings the buzzer. He invites Professor Stokes in, and introduces himself. Shaw says he had researched Stokes, and found his background impressive. Shaw says he has a shared interest in the occult, but they can discuss that at another time. He asks if Stokes wants to discuss Elizabeth's horoscope. He acknowledges that, and says that despite his horoscope letting her know that her fears were groundless, he wants to know if he believes his projections are correct. Shaw explains that he did t he best interpretation of the signs that he could. Stokes ask how much he charged her, and he says there's no charge for his services—he lets his clients pay him what they think his services are worth. Stokes asks how much she paid, and Shaw suggests that he ask her. Stokes asks about his background, and Shaw suggests that Stokes thinks he's a charlatan. Stokes says he doesn't know. 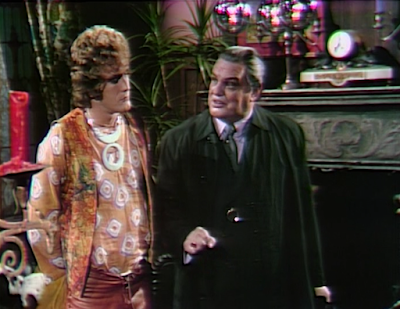 Shaw says that he is clairvoyant, and can see the future. Stokes asks to see an example of his gift. Shaw asks about the two children are in Collinwood. He says that they are David Collins and his niece, Hallie. Shaw says that he's never met them, but he sees a room in Collinwood in the future. He mumbles, and then says they appear to be asleep, having been to a party. He describes Hallie, and Stokes is impressed. He tells Shaw it was interesting to meet him. Shaw asks him if Elizabeth is aware he came to see him. Stokes says she is not, and bids him goodnight. 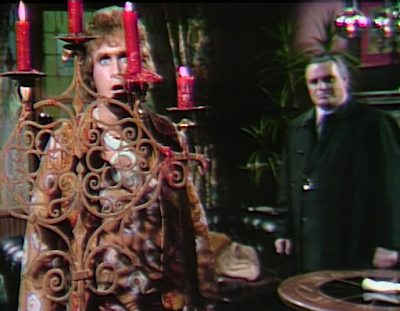 After he leaves, Roxanne comes out and says he's got a great mind—he just doesn't always use it well. She points out that she didn't need to reveal his psychic power. She says that Elizabeth is one of his richest clients, and she's willing to pay well for his services. She reminds him they can't afford to lose her as a client. She asks him what he saw in his vision. He says he really saw the children, but they weren't asleep—they were dead. 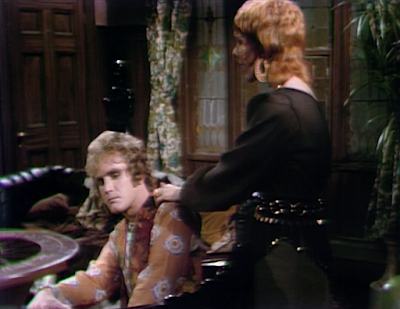 David and Hallie return to the playroom. He says they have to prevent something terrible from happening. He says he thinks the dolls in the dream were meant to represent them. He thinks someone was trying to put a spell on them. He says he thinks it can be lifted if they remove the dolls from Rose Cottage and destroy them. He takes the two dolls and they leave the room. 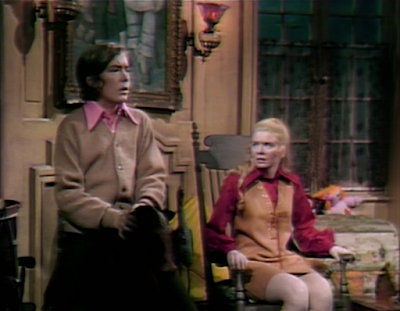 Shaw gets up to leave and finds Roxanne standing outside the door. She says his conscience has been troubling, and now he wants to go warn Mrs. Stoddard about the children. He tells her they're in great danger. She says that may be in the future; months from now. She tells him there's no reason to hurry off and jeopardize their position with Mrs. Stoddard. 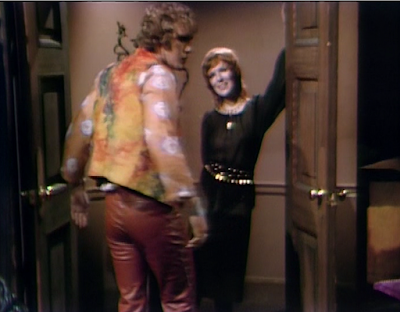 David and Hallie take the dolls to the drawing room and throw them into the fireplace. They watch them burn, and he tells her that he's sure they've done the right thing. He says they need to return to the West Wing to confirm that the playroom is no longer there. 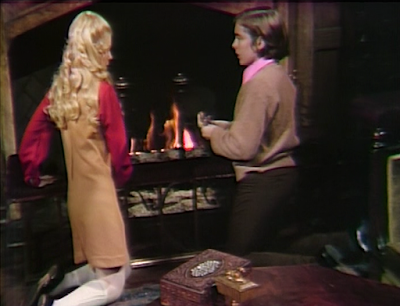 In the West Wing, David pleads for the room to be the closet as he opens the door. It's still the playroom. They see the dolls are back in Rose Cottage. 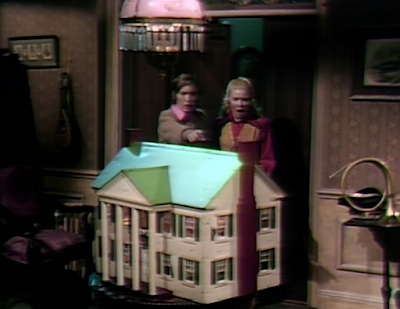 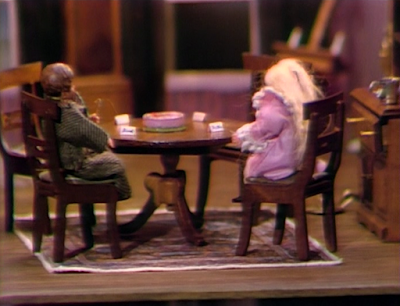 John: So do we mark off the doll mansion known as Rose Cottage, or do we need to wait until Barnabas and Julia are aware of it?

Christine: I don't think we can wait for those two to be back on the job to check off clues. At this rate, Collinwood will be in shambles by the time they come back to work.

John: So we now have a little more info on Sebastian and Roxanne. They're grifters, to be sure, but he's also an actual psychic. It's pretty clear that he's not the dominant one in their relationship. Makes you wonder if they both materialized out of nowhere when Barnabas and Julia returned from 1995... 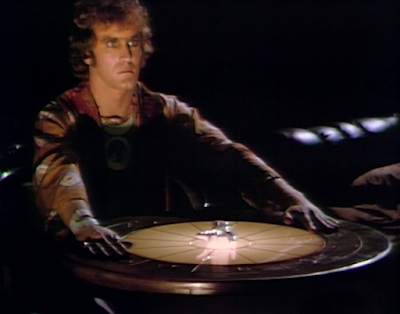 Christine: That's an interesting thought. I'd still like to have some explanation for why Sebastian is the spitting image of Jeb Hawkes. Could it be that the Leviathans borrowed his body while he was out on an astral journey?

John: Such naive children, thinking they could burn the dolls to get things back to normal! I actually think it would have been cooler if Rose Cottage, like the toy ship, appeared in the drawing room after they torched their homunculi!

Christine: Barnabas and Julia know the kids are going to die, and that ghosts are involved somehow in the destruction of Collinwood, yet the kids were pretty much left alone today. What's really sad is that this has happened before, so they should know better. 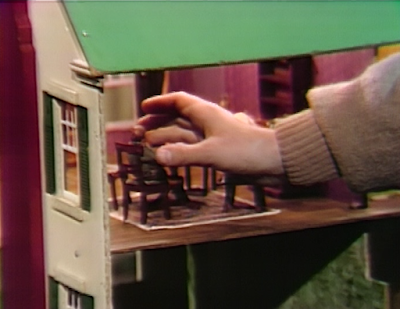 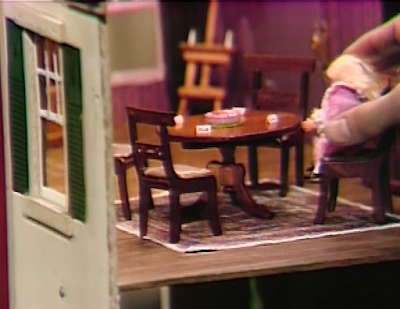 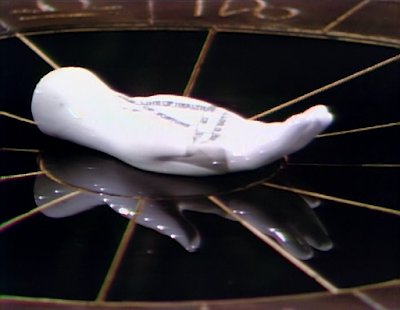