Hallie finds David in the playroom, dressed in old clothes, rocking on a rocking horse. Hallie reminds him that he's not supposed to be there. He doesn't acknowledge her in any way. She leaves the room and runs into David in the hall. He asks her what happened, and she says he was in there, all dressed up in period clothes. She says he was in the room playing with his boat. David says it's not his boat—it's Tad's boat. Then he realized she saw Tad. He says he has to go into the room to see Tad. They go in and he calls for Tad. Hallie says that he's gone. David begs for Tad to let them see him. They hear children laughing. 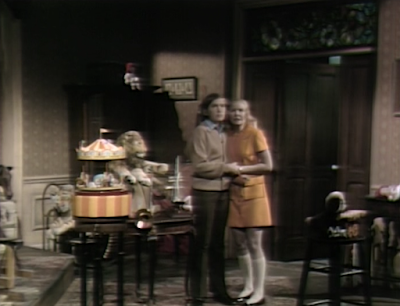 Carolyn is reading a book on astrology when Sebastian Shaw arrives at Collinwood. She apologizes for staring at him, pointing out his resemblance to her late husband. She asks him if he's finished with her horoscope and he accuses her of not believing in astrology. He says he started it, but didn't finish it. He says he knows why she came to see him. He tells her that he's not her husband. He tells her that he's not going to finish her horoscope, and he thinks it best that they never see each other again. As he leaves, Barnabas comes downstairs and is shocked by Sebastian's resemblance to Jeb. She explains that he left, refusing to finish her horoscope. He says that's one of the clues from 1995, and says they might change things if they can see her horoscope finished. Barnabas brings up his lost love that he barely knew, Roxanne... which he compares to her Jeb. She points out that if there's parallel time, then there's still a Roxanne. Barnabas tells her that they must make Sebastian finish her horoscope. 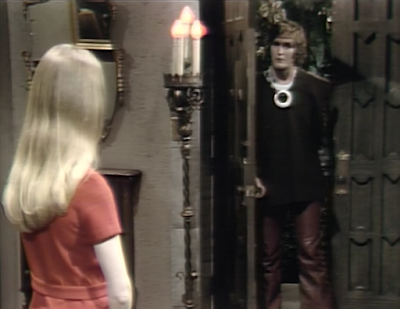 In his bedroom, David tells Hallie that she can't tell anyone that she saw a ghost. He reminds her that they already hurt her arm. She asks what they want, and he says they told them they want to live. He says that they can't tell anyone. Hallie asks him to promise not to go into the playroom again. He reluctantly does, and Hallie tells him that she's sure they'll leave them alone now. She leaves, and he begins to read a book. He hears music playing, and screams for it to stop. It does. He then hears a woman's voice speak his name. His drawer opens, revealing the old clothes. The voice tells him to come to the playroom. He drops the clothes and leaves his room. 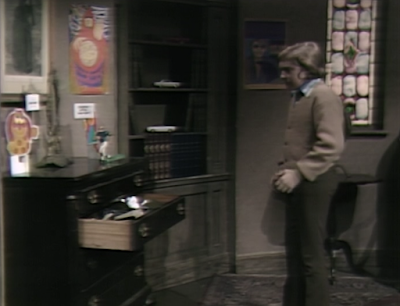 Hallie finds Carolyn reading about astrology. She asks why people would want to know the future, when they can find out bad things. Carolyn asks if she's talking about her parents accident, or something at Collinwood. She quickly says she was talking about the accident.

David walks into the playroom. He watches the carousel spin. 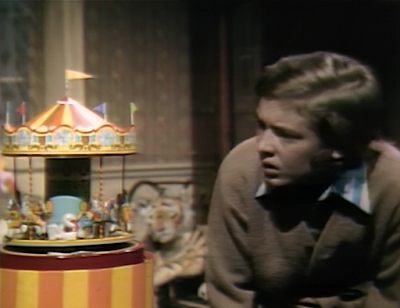 Hallie is on the phone with her uncle when Carolyn comes downstairs. Carolyn asks when she last saw David. She says it was about an hour ago. Carolyn asks if she knows where he is, and Hallie says the house is so big, he could be anywhere.

Hallie approaches the playroom, sure that David is inside. She goes in, and when she sees him, she says he promised never to go in again. He tells her that he doesn't know what she means. She calls him David, and he calls her Carrie. She's confused. He asks her where she got the clothes she's wearing. She asks why he called her Carrie. He says that's her name. She calls him Tad, and he says he's been waiting for her. He says they need to find Rose Cottage. She says it doesn't exist. She says Julia and Barnabas are trying to find out about it, and he asks her who those people are. She asks him to leave, and they do, together. 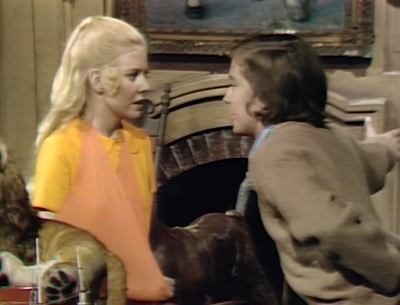 Outside the room, she asks David to tell her about Rose Cottage. He asks her why they're there. He doesn't remember what happened. She leads him away, and he asks her what he said. 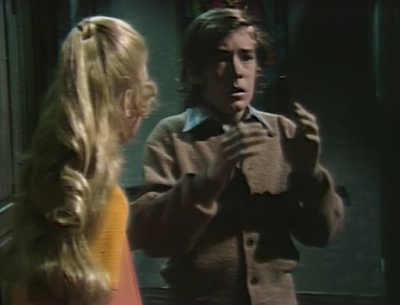 Barnabas comes to see Sebastian Shaw. He says it's about his cousin Carolyn. Shaw lets him in. Barnabas tells him he must finish Carolyn's horoscope for her well being. He says he's an astrologist not a doctor. Barnabas offers to pay him double his price to finish his work. Shaw refuses. Barnabas assures him that he'll never have to see Carolyn again after he finishes. Shaw says he chooses who to work for, and he chooses not to work for him. Shaw walks out on Barnabas, into his meditation room. A woman enters who Barnabas recognizes as Roxanne! 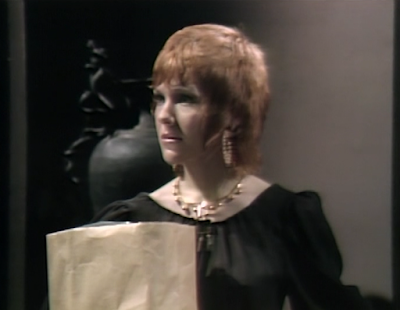 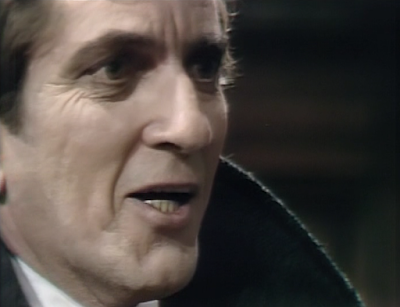 John: Why did Hallie say David was in playing with his boat, when he was doing nothing of the sort? It's not like we didn't just see him rocking on the horse! I thought the writers only tried to fool us by changing things that happened at least a day prior... 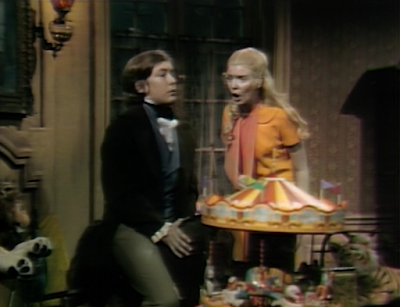 Christine: I thought that was strange also, since there was no way we were going to so easily forget the extremely troubling image of David rocking on a kiddie horse! Stranger yet was that his clothes changed after opening credits. 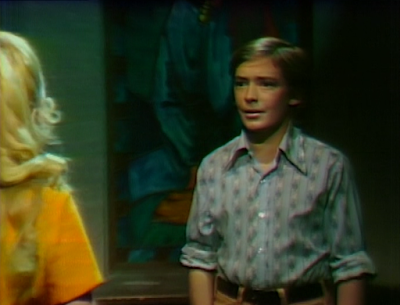 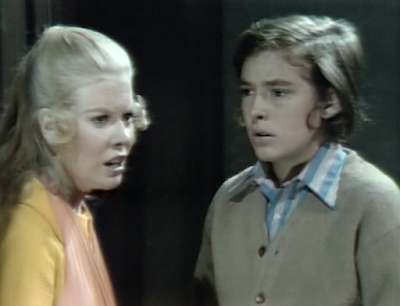 John: The unfinished horoscope! Check! What does it mean? No one has any idea! Of course, even if he does finish it, will it count since Shaw has it titled HOROSCOPE - CAROLYN STODRARD HAWKES? 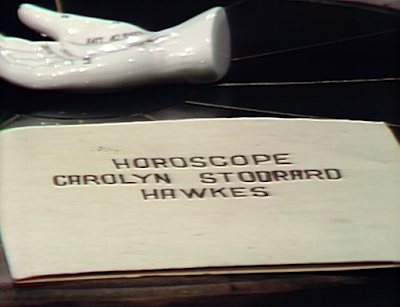 Christine: It means Carolyn has no idea that she's destined for crocheted vests and appalling lipstick application in the future. It also means that Seb-Jeb is not very meticulous. It looks like Astrology has been added to the very rich occult science library housed at Collinwood. 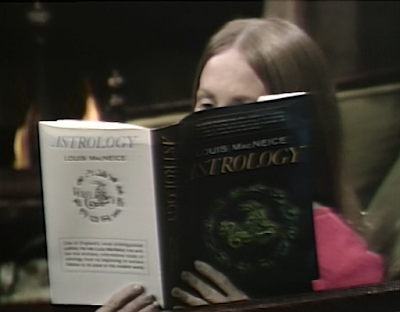 John: Welcome home, Roxanne-alike! I guess we can assume Barnabas will forget about the urgent matters at hand so he can pursue yet another uninterested object of his affection! What a coincidence that she would cross his path today, just after he brought her up to his cousin Carolyn... 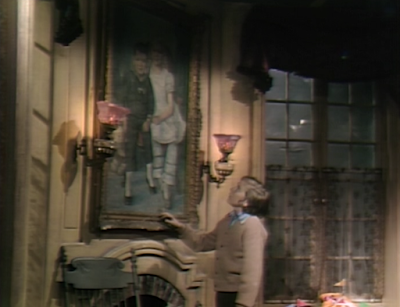