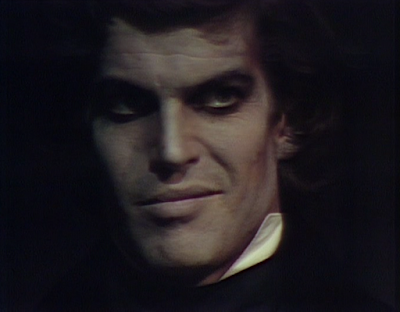 Gerard approaches David outside his bedroom, and follows him as he backs in. Gerard closes the door behind him. David asks who he is, pointing out that he saw him in his dream. Gerard smiles at him. He approaches David, who screams. 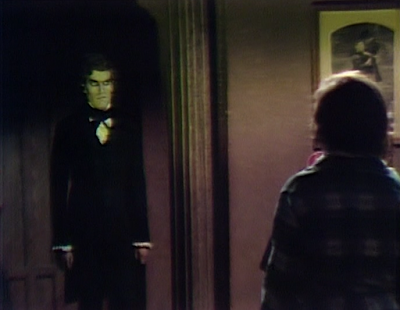 Julia hears David scream and comes into his room. He's alone. She says that he's been in the room—she says she can sense it. David asks her who has been in the room, and she asks David to tell her. She says he's the only one in the room. She asks why he screamed. He says he had a nightmare. She asks him to tell her about it, and he starts to make up a story. She tells him not to lie to her. She asks if there was man in his dream with dark hair and cold, evil eyes. He says there was nobody like that in his dream. He makes up a dream about soldiers and airplanes bombing Collinwood. Julia says it's important that she know if anything unusual is going on. He says the unusual things in Collinwood are her, and Barnabas, and Quentin. She says she'll leave him alone, and says that she hopes he doesn't have another nightmare. After she's gone, he says he didn't tell her anything, because he knows he wouldn't want him to. 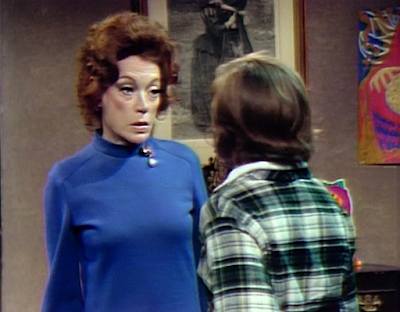 Quentin asks Daphne what's happening in the house. He asks her why it's taken so long for her to come to him. She kisses him, but doesn't speak. Quentin is unaware that Gerard is in the room, watching them. Daphne is alarmed, and Quentin asks her what's wrong. She goes to the door and opens it for him to leave. He tells her that she's going to answer his questions. He tells her he'll give her one more chance, and leaves the room. After he's gone, Gerard gives her a quill to write a note. 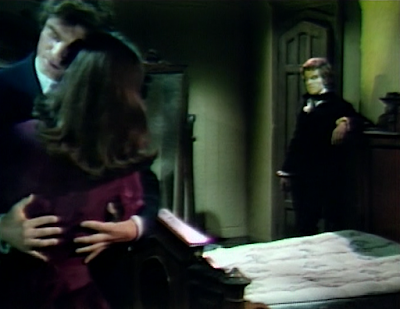 Julia finds Shaw in the drawing room. She asks if he discovered who the stranger was, and he tells her that if he does, he'll tell Mrs. Stoddard. Julia says she's been reading up on him. She says she got some articles on him, saying he's had a great deal of publicity. She asks why he's planning to stay in Collinsport. He points out that he hardly knows her, and asks why he should tell her. He asks if he needs her permission to stay in Collinsport. She says she'd welcome him if he used his talent to help them. She reminds him how he lied about the tune he played on the piano. He asks if it's possible that she's mistaken, and she says that the song plays when spirits who want to destroy Collinwood are present. She says the children will be destroyed if he doesn't help them. Julia says that if he said one word, Elizabeth would take the children from the house. He walks out on her, and runs into David in the foyer. David asks to speak to him. 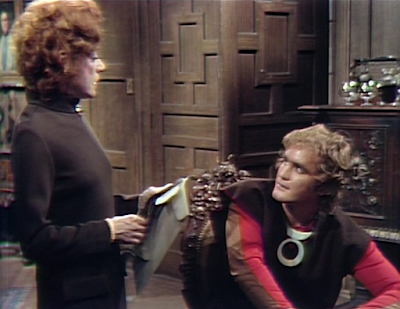 In David's room, Shaw asks if David was worried about the stranger. David says he thinks the others all believe in horoscopes. Shaw asks him if he met a stranger. David says that he is the only stranger he met, and that was today, not yesterday. He asks Shaw if something terrible is going to happen today. He asks if he meant everything he told his aunt, and Shaw says he did. He leaves David alone in his room. 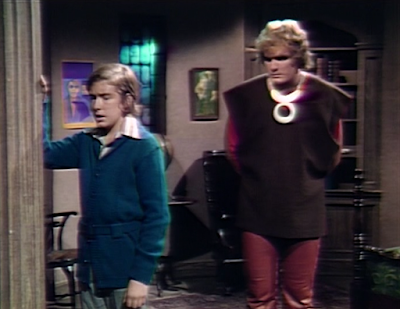 Gerard watches Quentin from outside the drawing room. Quentin reads a note from Daphne that says she will tell him all tonight at midnight in her room. Julia comes downstairs to study Elizabeth's horoscope. They discuss Shaw, and she says she's trying to get his help. She tells Quentin that she and Barnabas would be alone without him. Quentin reminds her that he's not very dependable. She asks if he's seen David, and he says no. She says she's going to check on him. 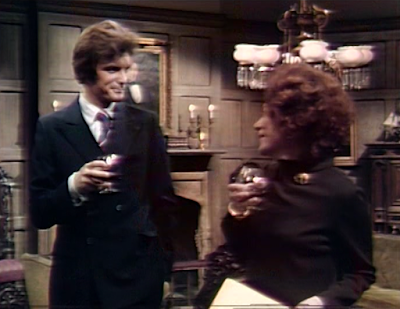 Julia looks at the model ship in David's bedroom when he comes in. He asks what she's doing and says he has a right to privacy. He tells her she can leave, and that she won't be invited back. She leaves. 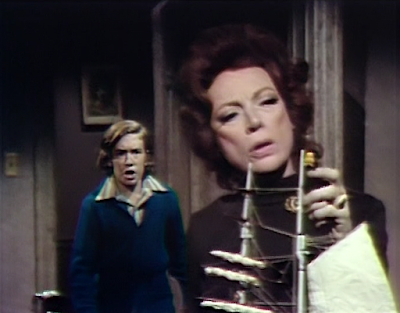 In Daphne's room, Gerard prepares a rope with which he likely plans to kill Quentin.

David finds Julia in the drawing room, and asks her if she's still looking for Rose Cottage. She says she is. He apologizes for speaking to her the way he did before. She apologizes for going into his room while he wasn't there. She goes upstairs with him to get Elizabeth's horoscope, which she left in his room. 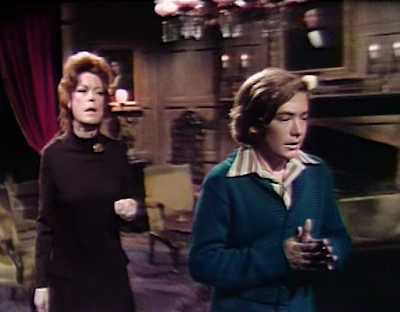 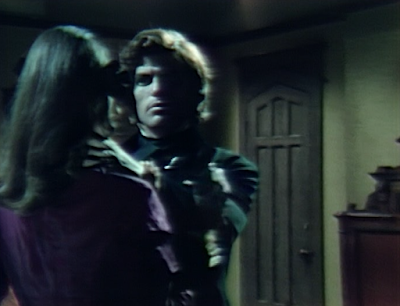 Quentin watches the clock, a few minutes before midnight. Julia comes into the drawing room and and says the horoscope says that tomorrow an enemy will become a friend. She invites him to have a drink, but he refuses, heading upstairs.

At the stroke of midnight, Quentin goes to Daphne's room. He looks for her, bu doesn't see her. He calls for her to appear. Gerard sneaks up behind him with a rope. 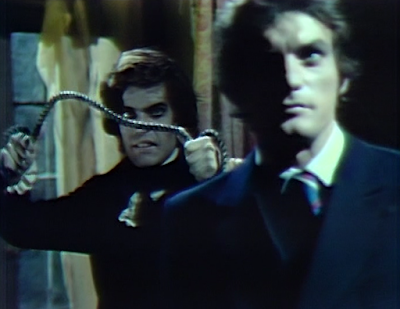 John: Wow! David sure hit Julia with the full teen angst today! Even he has to admit that his made up dream story about planes bombing Collinwood wasn't likely to convince anyone.

Christine: With the Vietnam War going on, and the Kent State shootings happening just 3 months prior, I think his made-up dream would have been easily accepted at the time.

John: I love how Quentin tries to have a rational discussion with Daphne's ghost, considering that he's never heard her speak a word. Knowing Quentin, you'd almost expect him to prefer a woman who doesn't speak, and just kisses him...

Christine: Now you've hit on the source of his infatuation! It all makes sense now!

John: Nice to see Gerard finally do something of substance, even if we all know that his plan to kill Quentin will be foiled tomorrow. The only question is who will stop him—Daphne? Julia? Barnabas? The children?

Christine: I really wish we could count on Julia to put the smack down on anyone who dares hurl a sexist statement her way. It's one thing when Barnabas is the one responsible, but when a leather pants clad, jewelry laden hipster occultist has the audacity to say, "I've seen women like you before. Hysterical women who imagine ghosts all over the place when there are none," then I would expect a more fiery retort from her, especially when there are ghosts all over the place at Collinwood! 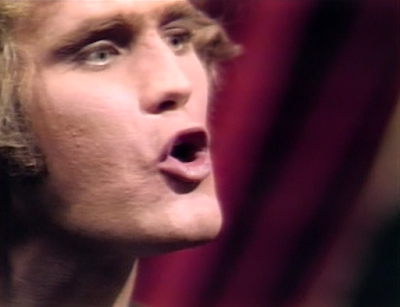