David and Hallie stand outside the door where they hear music playing. She reads a note which says when the music stops, the play begins. The music stops, and David wonders what will happen. Hallie starts to leave, and the door opens on its own, revealing the playroom inside, where there was once a closet. They go inside. Hallie can't believe it, saying the door led to a closet before. David tells her the music was coming from the carousel. 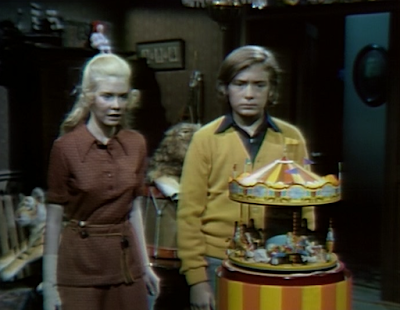 Hallie appears to have a change of heart, and names the horses in the carousel. David wonders who all the toys and junk belonged to, and she doesn't understand him. He tells her that whatever game she's trying to play isn't funny. He refers to her by her name, and she explains that her name isn't Hallie. She says she can't remember her name. David turns off the carousel and asks why she can't remember her name. Hallie reverts to normal and says they shouldn't be there. 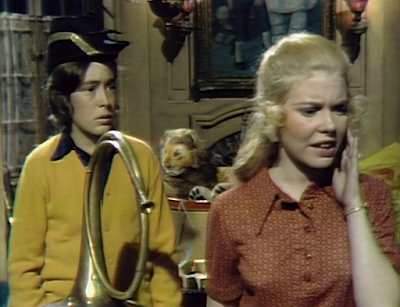 They suddenly smell lilacs. Hallie runs out of the room, and David follows her. Inside the room, Daphne turns the carousel back on. 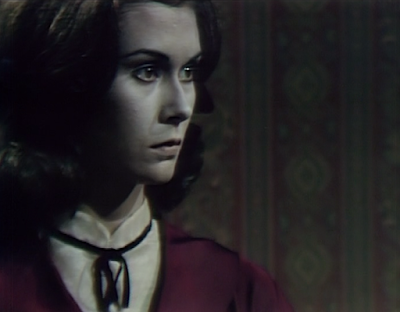 Quentin comes downstairs and finds Julia asleep in the drawing room. She wakes, and he tells her that the sun's up—it's morning—and the children are alright. She asks if something may have happened that they don't know about. Quentin suggests Carolyn's warning may have meant nothing at all—the ravings of a madwoman. Julia tells him that the whole house was in ruins, and he and Carolyn were insane. She says the clues may not help, but they are their only guide to avert disaster. 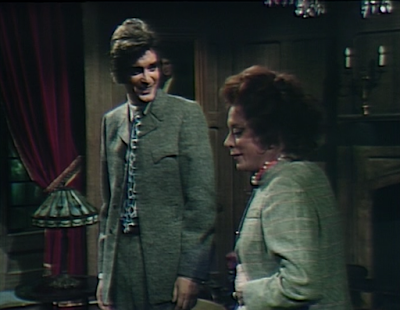 Hallie is looking at the dress when there's a knock on her door. She puts it back in a drawer as David comes in. He asks why she ran away last night. She says she doesn't want the woman to appear to them again. David reminds her that she appeared not to understand him last night, and she says she doesn't know what he's talking about. She takes the dress out of her drawer and says she's putting it up in the attic. 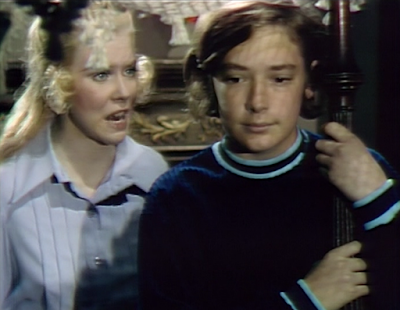 Quentin pours himself a drink. Julia walks in. He explains he's lonely without a woman in his life. Julia says she's going into town to research Gerard Stiles. He compliments her on her look, and the perfume she's wearing. She tells him she's not wearing any. She asks him to describe the scent, and he's unable. She leaves him alone in the drawing room, pondering the scent. He then realizes that it's the scent of lilacs. 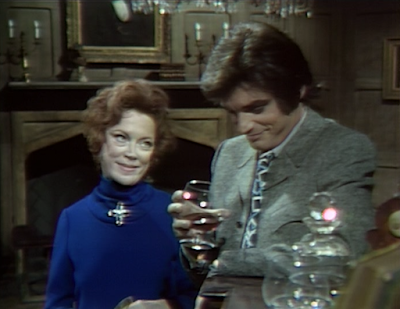 Quentin runs into Julia in the cemetery. He says he comes there to think, and asks how her research went. She says she found nothing on Stiles. She shows Quentin his tombstone. Julia asks him if Daphne's tombstone means anything to him, and he denies it. Julia says he talked about Daphne in the future—he was fascinated with her. Julia explains that she was very beautiful, and that everywhere she was seen, there was the smell of lilacs. Quentin denies any awareness, and walks her back to Collinwood. 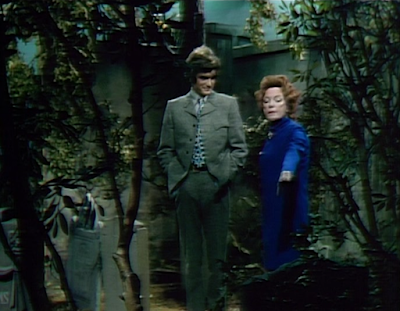 Hallie and David come downstairs after putting the dress away. Hallie hears the music from the playroom. David says he doesn't hear anything, and thinks she's just making it up. 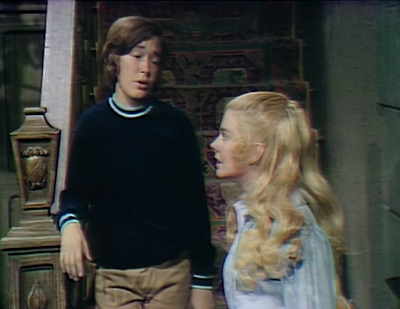 Hallie returns to the playroom. She walks inside and sees the ghost of Daphne. She says she knew she'd be there. Daphne holds the orange dress out to Hallie, who says she doesn't want it. She refuses to take it at first, but ultimately concedes. 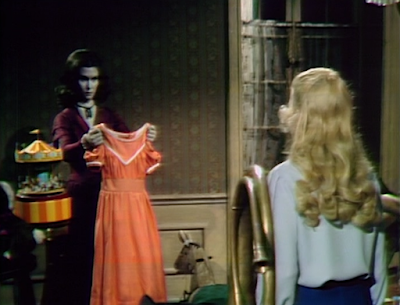 Quentin thinks about Daphne and his smelling lilacs earlier. He sits down and nods off. In his dream,  Daphne enters the drawing room with an armful of lilacs. He calls to her, but she backs out of the room. He wakes up and finds the lilacs on the table. 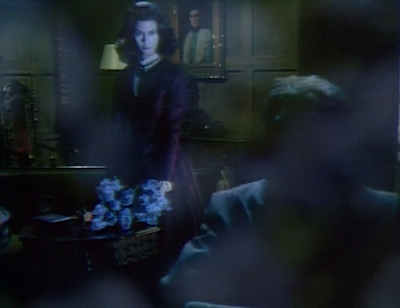 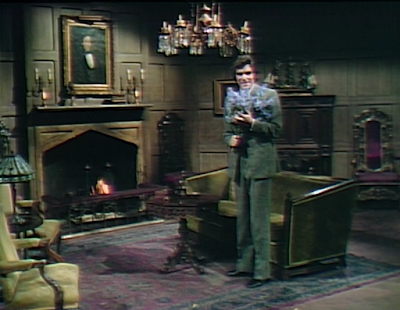 John: I thought for a minute Quentin was going to make a move on Julia, only to be foiled by the writers' need to reiterate the plot point of the lilac scent.

Christine: I thought they were reinforcing the point that Quentin was lonely enough to fall in love with a ghost. Where's Maggie anyway? Perhaps if she were doing her job the kids wouldn't be instigating the fall of Collinwood by playing with ghosts, and Quentin could get his groove on with a real live woman.

John: Great ghostly look for Daphne as she goes to hand Hallie the dress. Best stoic ghost face since Quentin first wandered the halls of Collinwood. 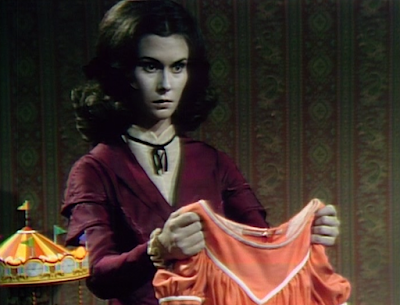 Christine: She wins the title of scariest ghost on the show thus far. It was clear to see why Hallie took the dress back.

John: I was hoping that our Catasto-tracker would come into play today, but it appears that they'll be dragging Carolyn's clues out for the next few weeks at this rate...

Christine: Let's hope the Catastro-tracker doesn't run as long as the Round Robin Nightmare tracker did! 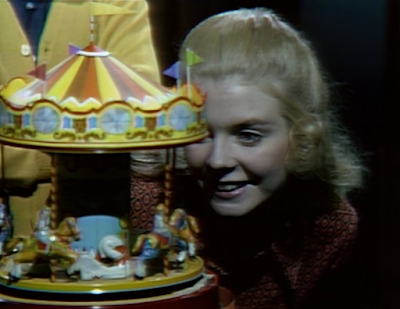